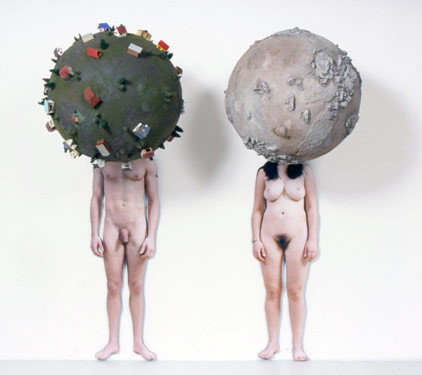 The exhibition of the work of artist, musician and critic John Miller, who was born in 1954 and lives in New York and Berlin, provides a comprehensive insight into a body of work that has been formulated since the 1980s and creates societal and artistic identification and representation models with analytical precision, wide-ranging humour and visual urgency.

With over 45 paintings, sculptures and installations, a digitised slide show of over 1,500 photographs and video works, the exhibition provides a survey of Miller’s work from 1983 to 2009.

This exhibition presents the first comprehensive overview of the work of John Miller and follows on from his solo exhibition in Le Magazin in Grenoble in 1999 and the presentation of a selection of his Middle of the Day photographs at Musée d’Art Moderne et Contemporaine in Geneva in 2004. The exhibition provides broad insights into the cosmos of an artist who assumes a unique artistic position among his contemporaries and fellow students such as Mike Kelley and Jim Shaw as well as Tony Oursler and Stephen Prina.

The first event in the series «In other Words» takes place from 1 pm on Saturday, 29 August, with a performance by Marcus Coates and panel discussions with John Miller, Claire Fontaine, Jutta Koether, Falke Pisano and representatives of the cooperating partners, i.e. Kunsthalle Zürich and Peep-Hole, Milan.

John Miller became known to a wider audience in the 1990s with the works in his signature “John Miller brown”, a dirty shade of brown rich in associations. The artist coated reliefs and sculptures assembled from found objects, mannequins and mirrors with a thick paste-like layer of brown paint which has followed gold leaf as the omnipresent surface of his work in recent years.

Simultaneously mimicking and critically undermining post-conceptual strategies and Minimal Art, John Miller works consistently in series which generate a conflict between the identifying marks of the models of artistic production, formal-aesthetic constructs, the sprawling psychological manifestations of dominant value systems and the psychological manifestations of everyday things: in the 1980s, he painted a series of figurative paintings which hybridise the tradition of American West Coast painting with motifs from the present; in the 1990s he produced paintings and installations on the globally pervasive phenomenon of the television game show, and from the late 1990s he combined text and image in photographs, installations and videos on the phenomenon of lonely-hearts advertisements in newspapers, magazines and on the internet; the mannequin, the figure of the standardised human form, which is also an object of the culture of fetishism and consumption that characterises both our present and our relationship with the desires of reality, has featured repeatedly in his work since the 1980s.

The artist has been working on a long-term and at first glance banal-seeming conceptual photography project entitled Middle of the Day since 1994. John Miller takes a photograph at exactly midday, irrespective of where he finds himself: i.e. on the road, on a train, in the landscape, in a restaurant, in his own house etc. The photographs incorporate the entire repertoire of figurative genres from portraits and still lifes to landscape photography and with biting social commentary calmly and relentlessly convey questions relating to the position of the artist in the context of the societal conditions of production, our relationship with leisure and work, social inequality, ecology, consumer behaviour and intellectual impoverishment, private and public behavioural patterns and much more.

Unexpurgated minimal and conceptual art, so to speak, as found also in the artist’s standardising brown and gold material reliefs, sculptures and sprawling miniature landscapes, which allow the endless everyday elements of human activities, human needs and human desires to become visible as substitutes objects in the Freudian sense (excrement, money, and gold) and in an accordance with a theory rooted in the Marxist interpretation of everyday merchandise as the fetishes of the individual.
John Miller’s works joyfully taunt society’s ideological apparatuses such as art. He has created a large-scale room installation specially for the exhibition at the Kunsthalle: architectural fragments, reminiscent of archaeological sites and covered with numerous found trash objects, are painted in the current John Miller gold and submerge the audience in an opulent ruin of the desire of our consumer society and of art.
www.kunsthallezurich.ch