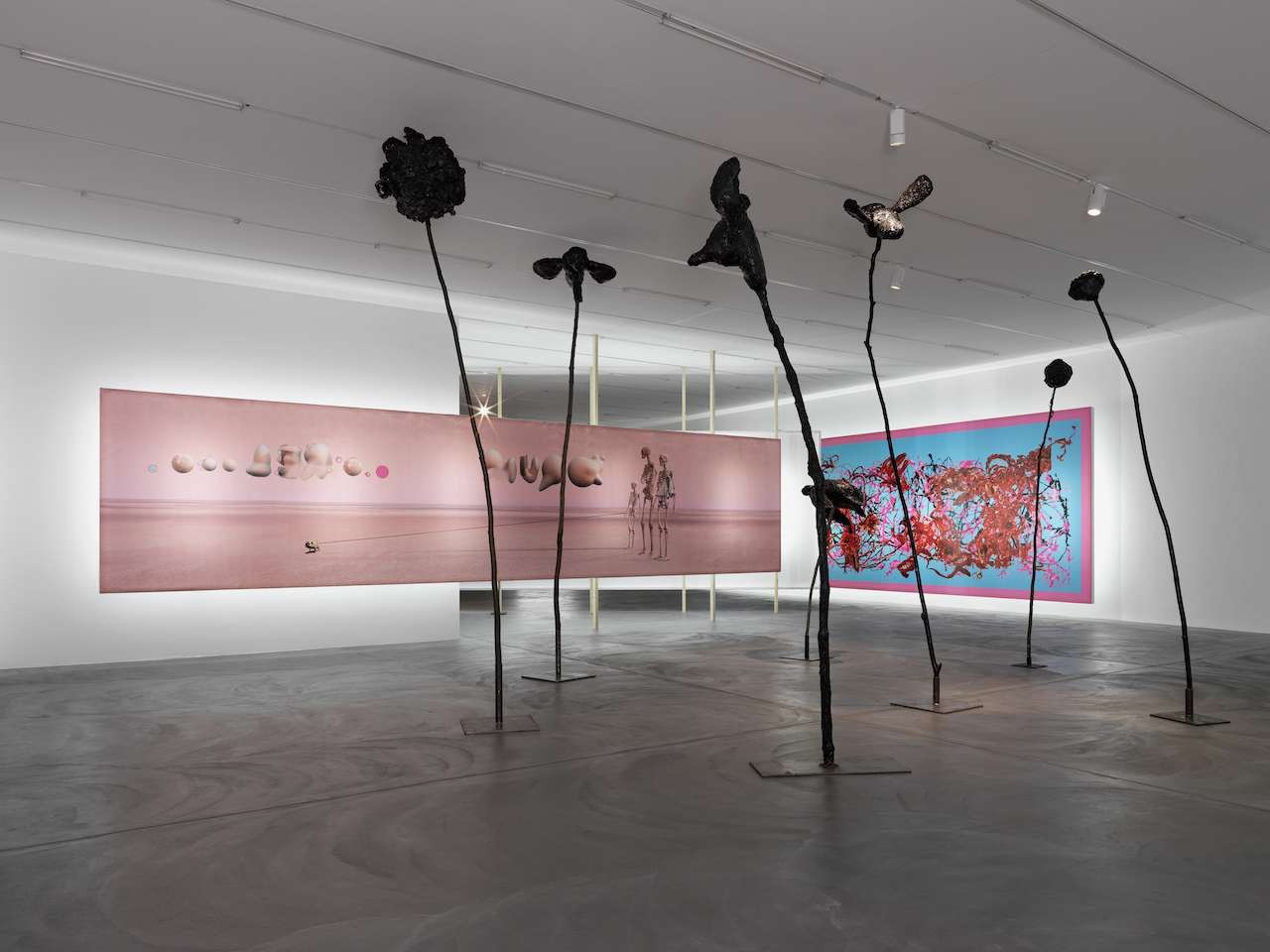 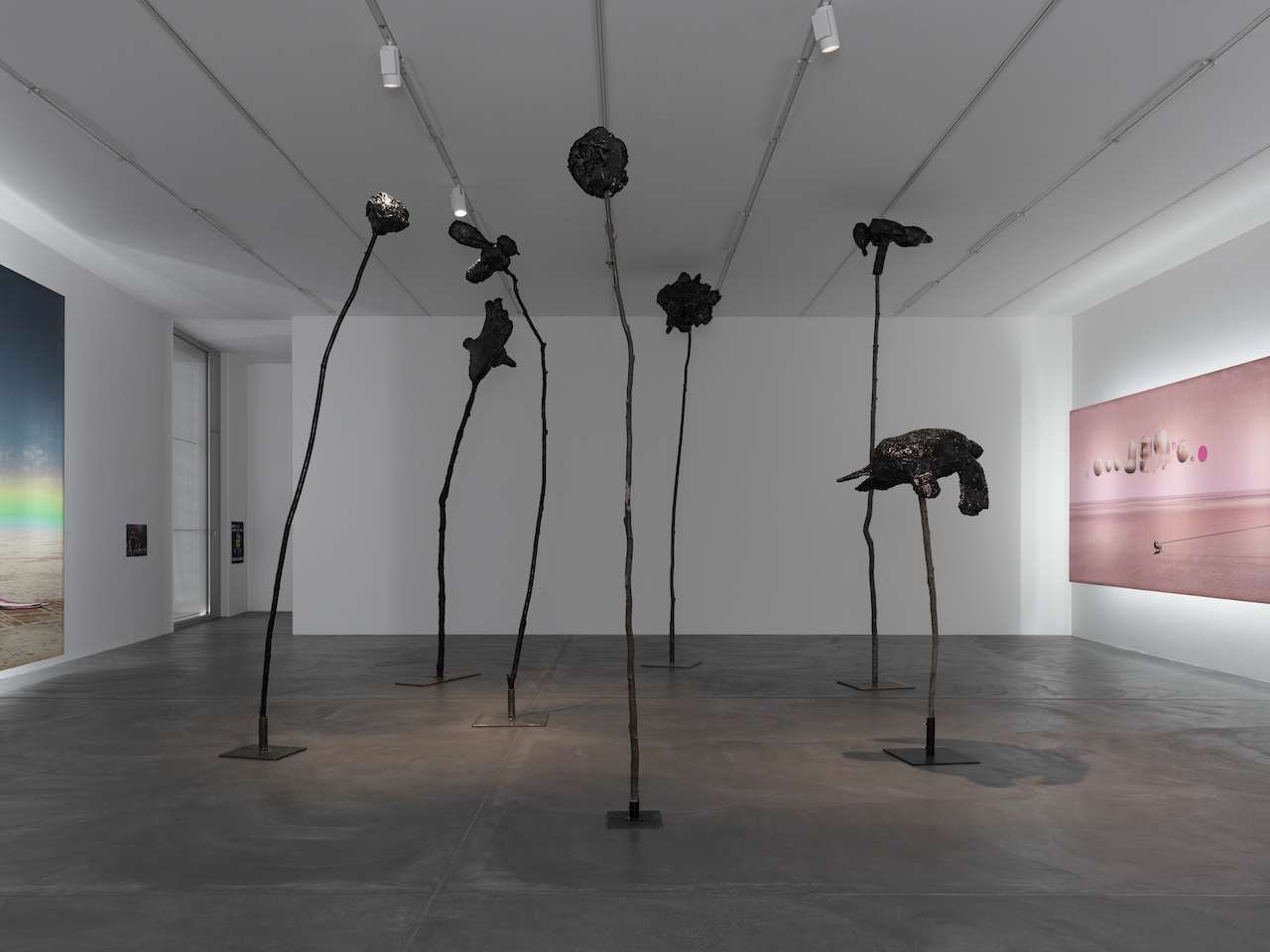 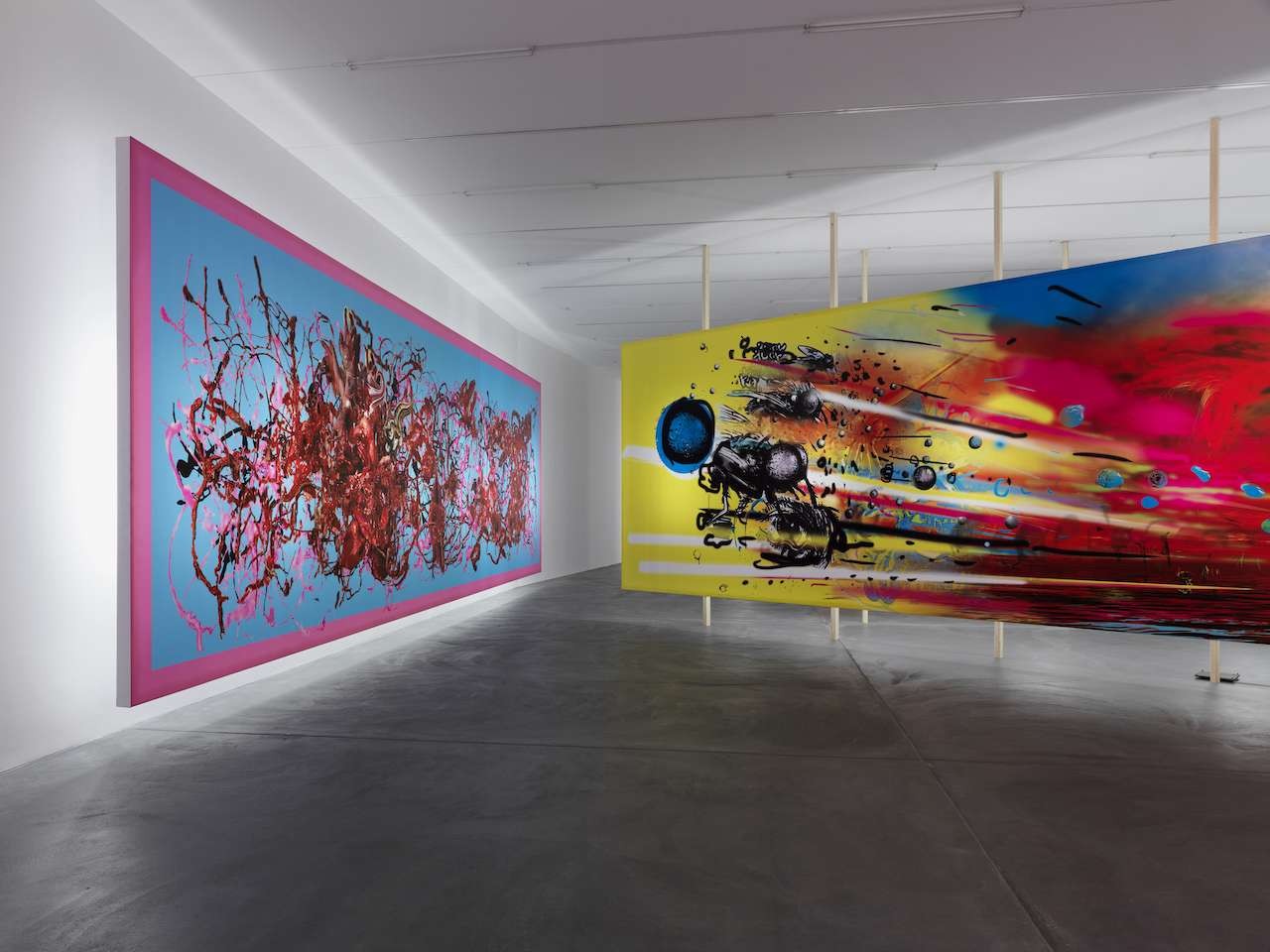 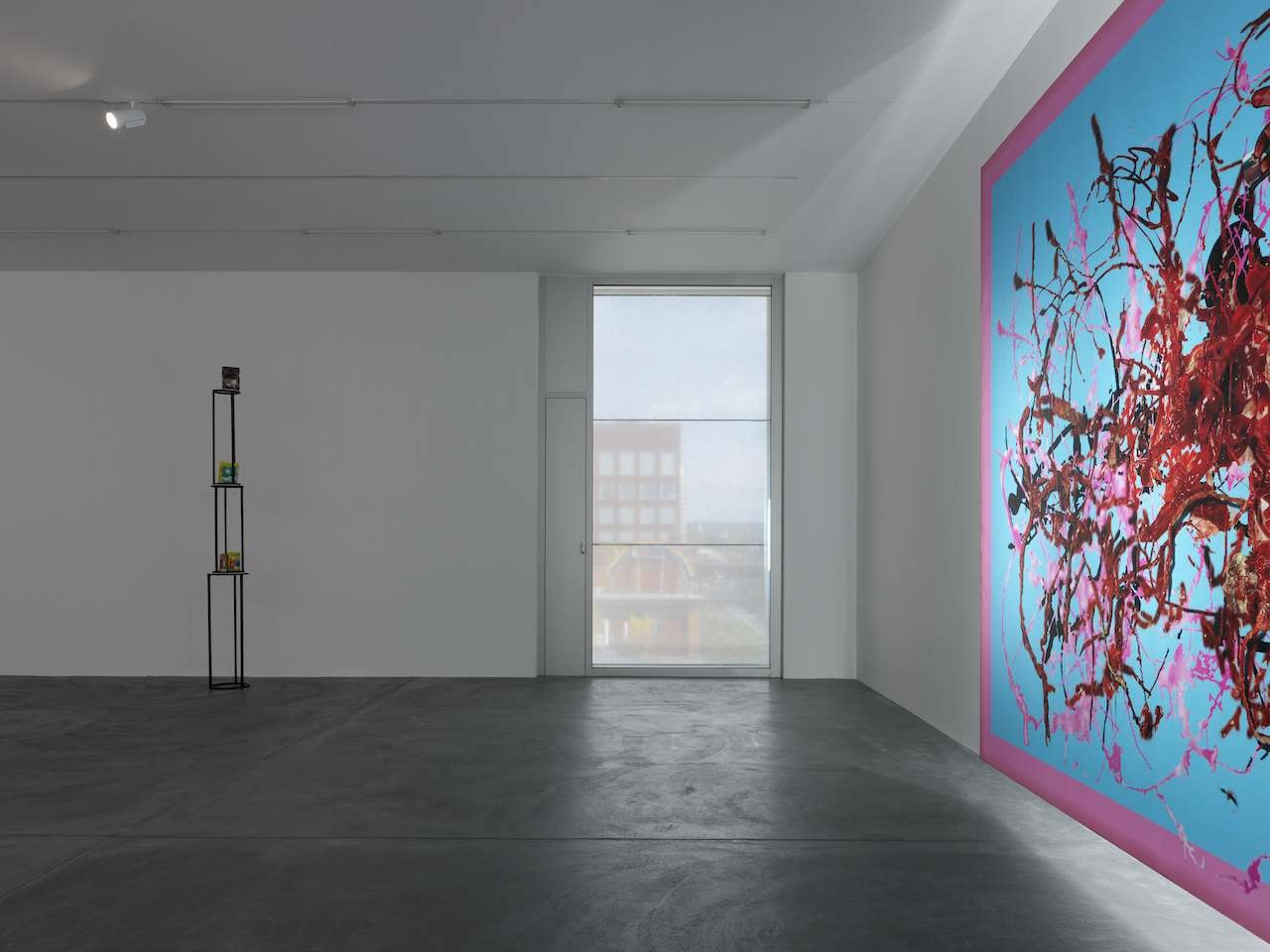 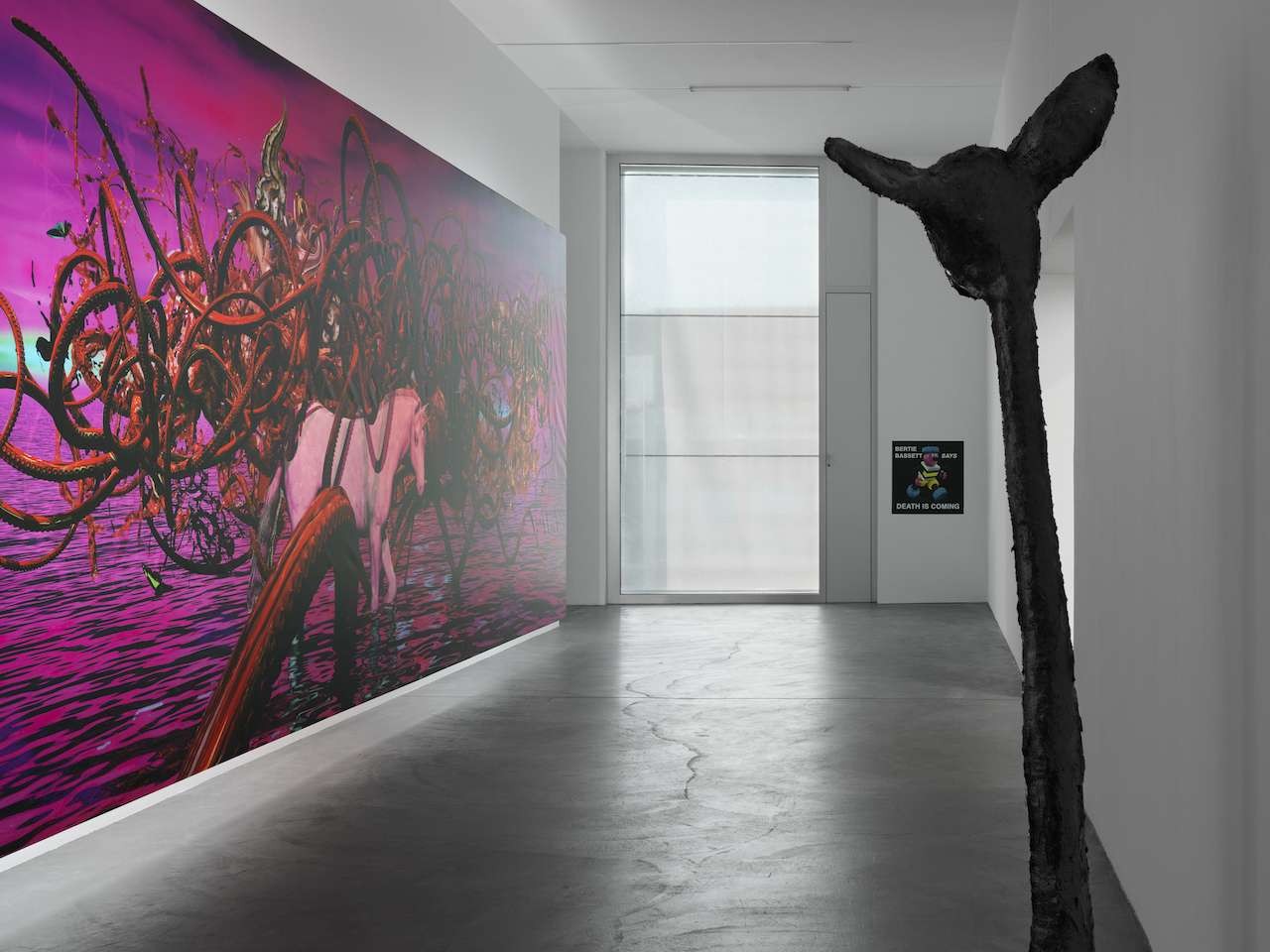 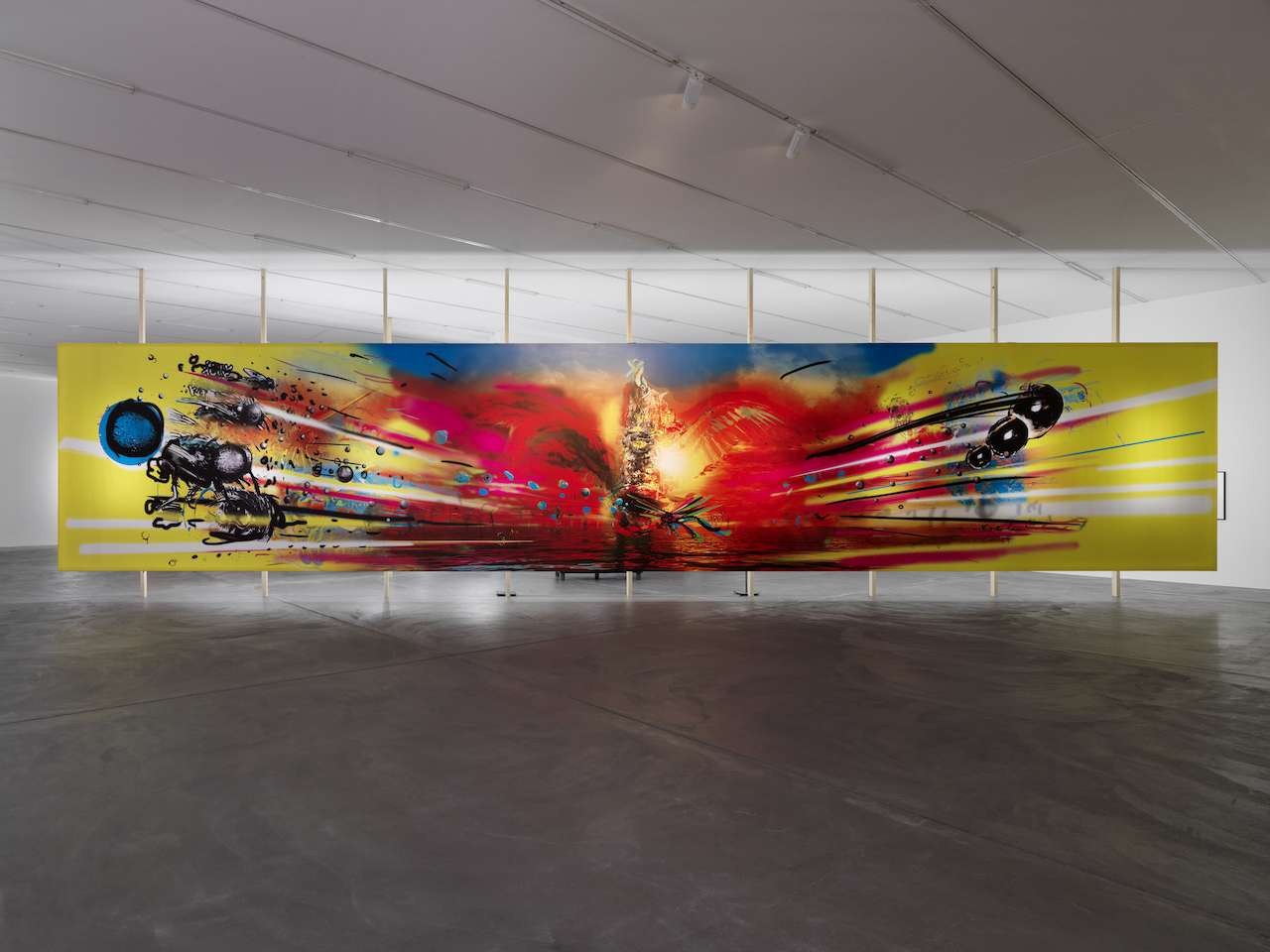 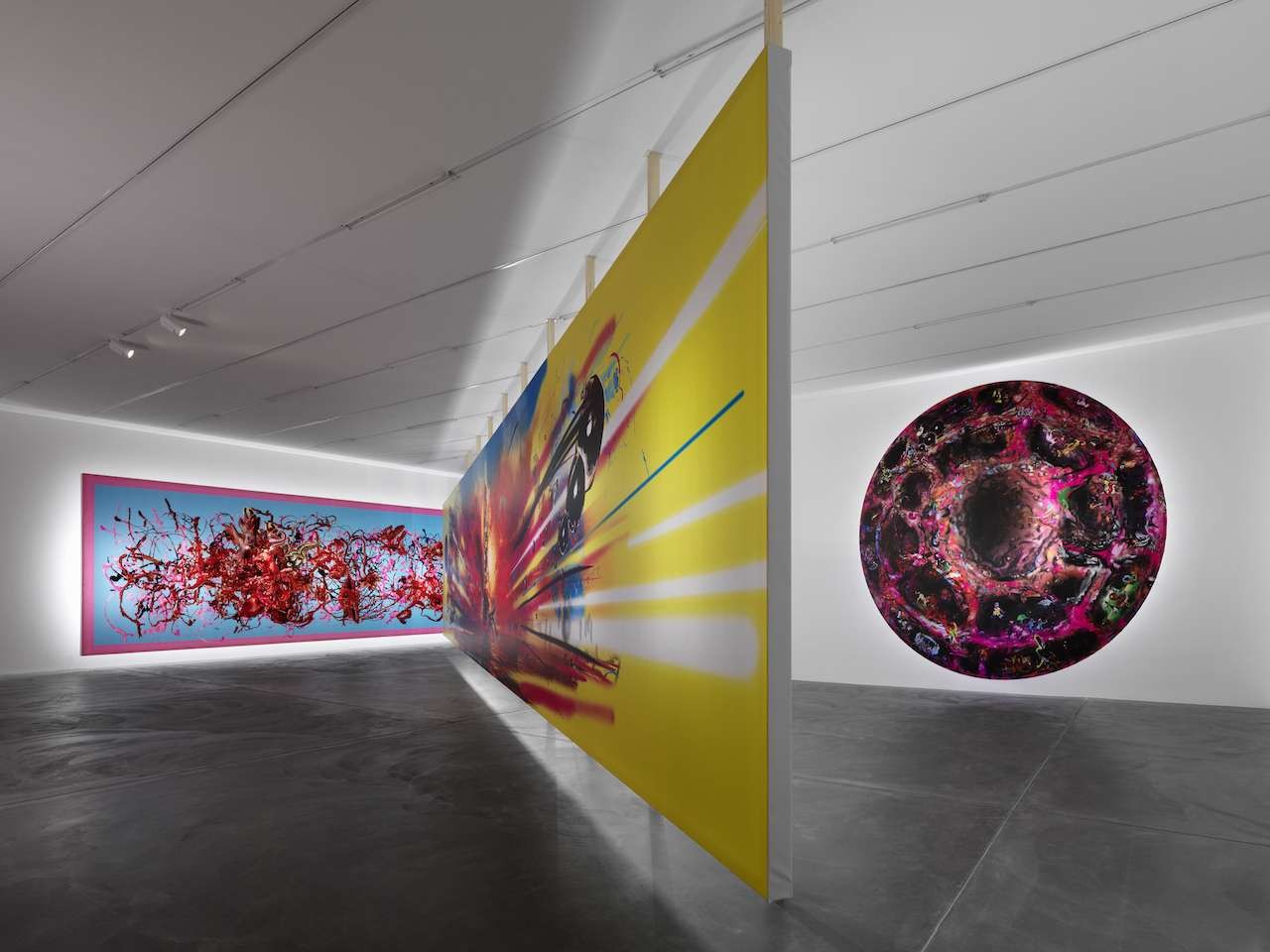 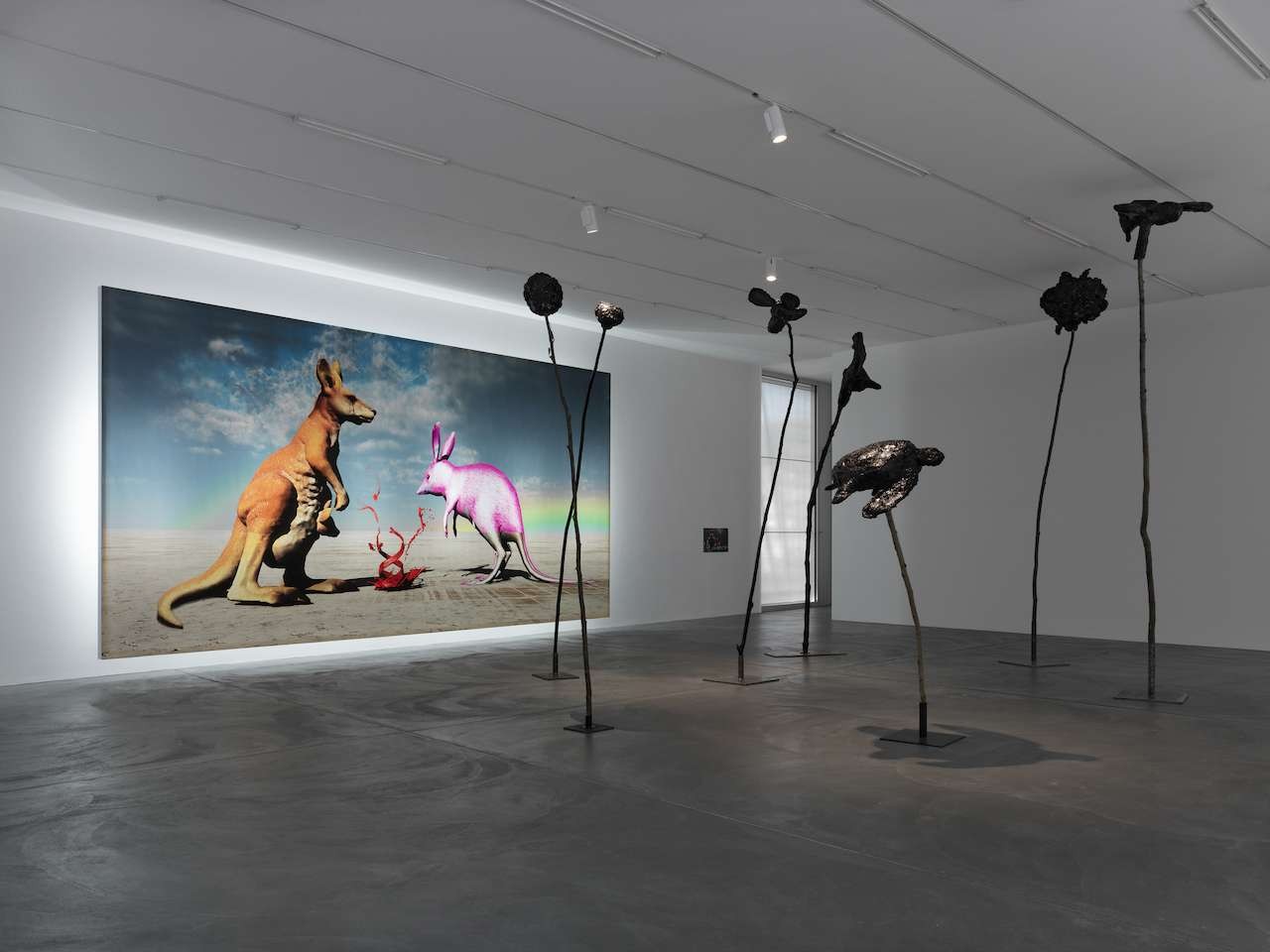 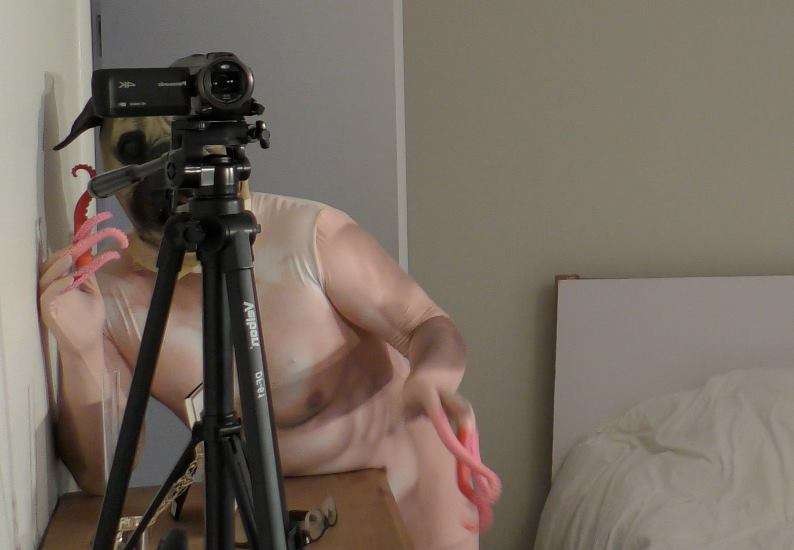 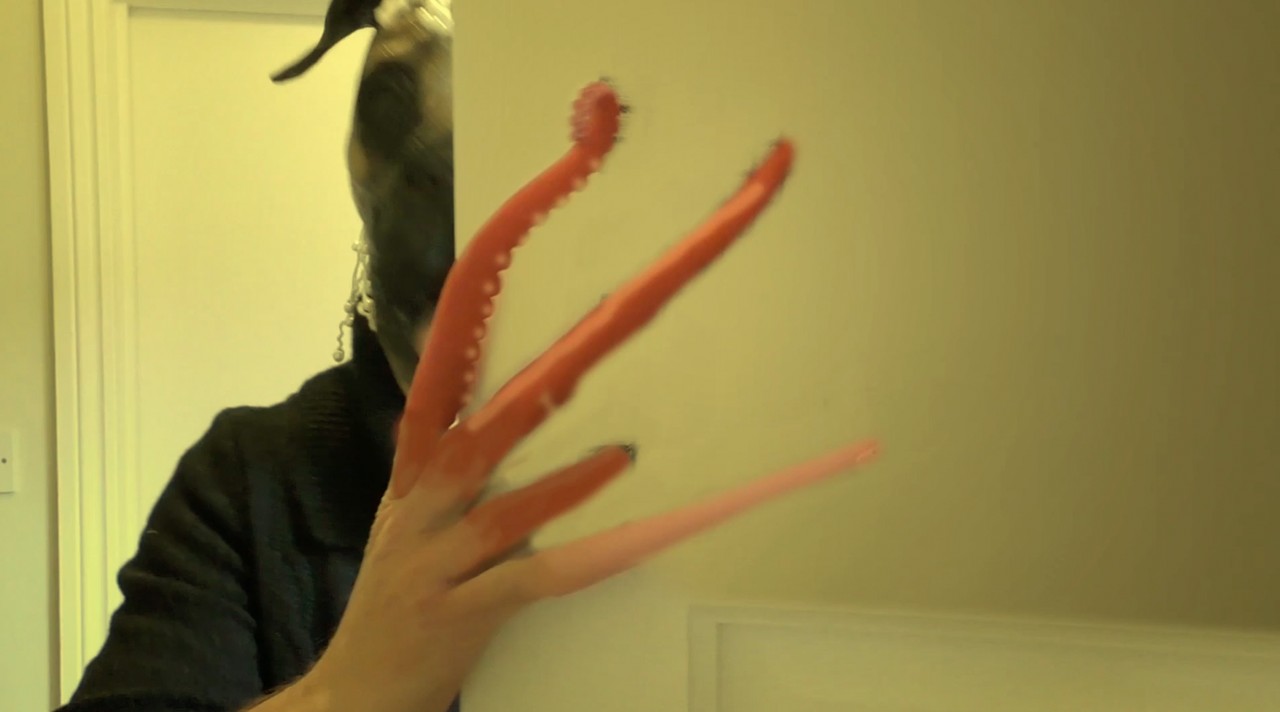 Kunsthalle Zürich presents DOGGO, the first institutional exhibition of John Russell outside of Great Britain. It includes six newly rendered paintings, all between 8 and 17 meters in length, and specifically adapted to the gallery space of Kunsthalle Zürich. Also shown are nine new sculptures, a series of drawings and a newly produced full-length feature film. The exhibition is accompanied by DOGGO, John Russell’s new book published by Miami-based press [NAME]. The works shown at Kunsthalle Zürich, as most of Russell's activities, are hard to pin down. One is overwhelmed by this oeuvre, without being able to quite figure out why (similar to Marguerite Duras describing her experience of watching Robert Bresson's film Au hazard Balthazar).

Let’s have a look back. 2000 saw the publication of BANK by Simon Bedwell and Milly Thompson, the catalogue summarizing the British collective BANK's numerous activities taking place in the 1990s. Looking back, the authors introduce themselves with the following assessment: “The beginning and end of this story is that we wanted to PLAY and not JOIN IN with the DRYGOODS CULT; the corporate blanket is WARM, we chose the COLD, idealistically and romantically, to try something more COMPLICATED, breathless and vertiginous; something NOT professional, NOT career; something that was all for ART but as fun, messy and stupid as LIFE.” They wanted it all and were pretentious. They celebrated the alternative as the non-alternative and “made shows that were our ART.” Obviously, this attitude had to collapse one day and it did by the end of the decade. By “January 1999 we'd done EVERY SORT of show we could think of.” Probably they ended up hating or boring each other.

In 1988, after having finished Saint Martin's School of Art, Simon Bedwell and John Russell “dealt with boredom and invisibility”. They decided to stage a series of fictional shows being convinced “that it didn't matter if you were actually having shows so long as people thought you were.” Some of them did happen in reality, but usually were not attended by many people. In 1991, together with Dino Demesthenous, they organized the exhibition BANK in a former bank building on 239 Lewisham Way in Southeast London. BANK showed their works along those of Carole Smith and Chris Winter. BANK, the collective, was finally formed by Simon Bedwell, David Burrows Milly Thompson, John Russell and Andrew Williamson (Burrows eventually left the group in 1995). Its multiple activities have to be seen in the context of an emerging scene of artist-led initiatives, of which Damien Hirst's exhibition Freeze in 1988 was the ‘glorious tip of the iceberg’. BANK stepped into a fast developing game of post-Margaret-Thatcher-Pre-New-Labor UK discovering contemporary art as a way of life, if not lifestyle. They were low and loud, angry and cartoonish, political and pretentious, but obviously they were having fun. BANK (the show) was followed by many others with memorable titles such as Space International (1992), Natural History (1993), Zombie Golf (1995), Cocaine Orgasm (1995), or Fuck Off (1996). They included artists such as The Cabinet Gallery, Martin Creed, Peter Doig, Matthew Higgs, Chris Ofili, Bob & Roberta Smith, John Stezaker, Gavin Turk, Rebecca Warren, and very often BANK itself. In 1996, BANK “was thought of as a curatorial unit rather than a group of artists”, as they wrote 2000 in BANK. By the end of the 1990s, things seemed to have gotten more aggressive and there were reasons for it. The playfulness turned into a cynical game, yet some of BANK's best projects came out of it, notable the legendary Fax-Bak, started in 1998. It consisted of faxes received from galleries and institutions, which BANK corrected and commented and then faxed back to the sender, marked by the stamp “Fax Bak. The Bank Service. Helping You Help Yourselves”. They would come back with comments like: “I haven't seen his piece of work but this sounds ridiculous.” or “This is all basically ... meaningless.” Some directors and curators were not pleased to read the truth and called back, and let their rant be recorded by BANK's answering machine.
So what was this all about? – Besides being “talentless, moronic, bullying, rude, obnoxious, self- righteous, pathetic, grungy, facile, ungracious, idiotic, childish...” according to BANK's self- description in their catalog. Together, they perform, film, curate, publish, and paint, using strong gestures to celebrate transgressive vocabularies. After leaving BANK, Russell starts to collaborate with French artist Fabienne Audéoud. One of their performances, The Social, was staged at Maccarone Inc. Gallery in New York for the opening of After Shelley Duvall '72 (Frogs on the High Line), curated by Bjarne Melgaar. In 2003, John Russell publishes Frozen Tears I. The Word Is Flesh, an 800 page “Theory/Horror Bestseller Book and Exhibition”, published by Cabinet Gallery in London, with texts by Art & Language, Fabienne Audéoud, Paul Buck, Jake Chapman, John Cussans, Martin McGeown, Ulrike Meinhof, Lucy McKenzie, and others. The collection of texts is inspired by Paul Bucks seminal 1970s magazine Curtains. Frozen Tears I is followed in 2004, by another 800 pages of Frozen Tears II (The Sequel), launched at Skylight Books in Los Angeles, Jack Hanley Gallery in San Francisco, Maccarone Inc in New York, and Moonlighting Night Club in London. Frozen Tears II is a collection of transgressive literature notably containing the first publication of Dennis Coopers' The Sluts. 2004 also sees the production of the possibly notorious The Thinking* commissioned for the exhibition Romantic Detachment at PS1/MoMA. Frozen Tears II is then followed, in 2007, by the 900 pages of Frozen Tears III. New 100% Prophesy. Already in 2005, Russell starts to present large prints as paintings, first at Norwich Gallery in Norwich, then at Transmission in Glasgow (“Transmission Gallery are pleased to present an exhibition of images by the subject position often referred to as John Russell ... The experience of these works is the equivalent to that of floating in the sun across a lake trailing your hand in the water.”) and, in 2007, at the legendary Matt's Gallery in London. All exhibitions are accompanied by texts treating subjects from pizza to Jesus to porn to Marx and questions of retirement. These texts come as if spoken by one person in different mental states, deeply involved yet disconnected, but linked by a will to always give too much information and not enough. In 2011, Russell, together with an anonymous co-writer, launches the Head Gallery, located at 165 East Broadway in New York. It squats the address of Reena Spaulings Gallery and organizes shows that do or do not exist. Its history is recorded and published in 2015 by Mo-Leeza Roberts under the title Head (Book Works, London). From 2008 to 2015, Russell works with Mot International in London, in 2016 he joins the Bridget Donahue Gallery in New York.

Today, at first glance, it appears to be Russell’s strategy to keep the space open and to escape from the territory of interpretation as fixed by art history, the market, the critics, and the institutions. This was the strategy of BANK, which ultimately ran out of steam. Russell's recent art stipulates a different doing. It is not against or for something, it is not symbolic or realistic, it is not cynical, ironic, or serious, it is not painting or sculpture, it is not figurative or abstract, it is not apocalyptic, romantic or dystopic. Whatever words you will choose to describe his works, they are the opposite as well. This becomes even more evident when reading critical reviews dealing with his exhibitions and art: You are confronted with an avalanche of contradictory adjectives as the reviewers struggle to describe not only what they see, but what it possibly could mean. His art invites us is to figure out how to approach art beyond these useful but worn out dichotomies. We get lost in order to invent new languages for understanding and are invited to work out how art might 'do something' and have some force, aesthetically and/or politically. That is ultimately the intention of Russell's art.
Since 2007, Russell is teaching at Reading School of Arts, 30 miles west of London. Today, Russell (*1963) lives and works in London.

On the occasion of John Russell's exhibition at Kunsthalle Zürich, Doggo, a book with texts by the artist, will be published in collaboration with [NAME] in Miami.

A large crowd is standing in a seductive and infinite ocean IN THE THROES OF ECSTASY. Some of these have bulbous cartoon features, limbs grafted with flowers, terminal diseases, stained skin or bodies covered in insects. These are people saying ‘YES’ to life, caught in the thrall of the event and SPREADING THEIR DESIRE THROUGHOUT THE WORLD LIKE A CONTAGION. It may be unclear whether these poses are the result of free will or fixed as narrative or compositional elements within a wider philosophical or political scenario; that is, whether this free will is predetermined by someone else’s idea of freedom, or whether it is somehow more spontaneous. But, anyway, these questions are subsidiary to the performative or ILLOCUTIONARY FORCE of the event, happening at this moment, second-by-second, as the staging of a staging, or PRESENTATION OF A PRESENTATION. And it does not matter anymore who wrote the script originally because this is an expression, or embodiment, of the fiction of an artwork-as-event-as-prophesy and/or curse of the unleashing of THE POWER OF THE FALSE which anyway does not have to be ‘unleashed’ because it is always the only movement of things beneath the appearance of generality
www.kunsthallezurich.ch