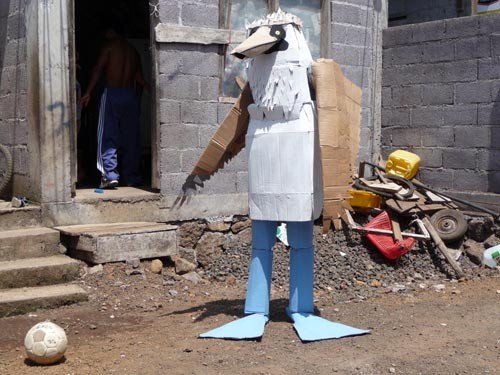 What would animals advise? The artist Marcus Coates, who was born in 1968, explores human and social issues in his performances and the resulting video works. He experiments with forms of meaning and consciousness from the animal kingdom as parallel ways of experience and carries out almost shamanistic acts in an attempt to respond to urgent questions. In these performances, for which he dons half or full body costumes, he engages in a dialogue with the mode of being of animals and re-translates their voices into our language. In his first solo show to be staged at a Swiss institution, Coates presents a total of 6 of his video works for two-weekly periods. These ambivalent works oscillate between dark humour, fascination and irritation and are accompanied by notes and costumes used in the performances. Viewers can experience the artist himself in action on three occasions: Saturday, 29 August, 1 pm, as part of the «In Other Words» symposium; Saturday, 5 September, 10.30 pm, as part of the Lange Nacht der Museen programme; and from 20 – 24 October in different daily performances during the opening hours of the Kunsthalle Zürich.

Earlier this year Marcus Coates was invited to create a work by the Center for Digital Arts in Holon (Israel). As is often the case in his work, the artist sought out concrete and urgent societal problems and asked to be allowed to convey to the mayor in a performance the answer provided to one of his questions by the animal kingdom. This “séance” took place with an interpreter in the mayor’s tiny office like a curious kind of meeting situation. The mayor asked the artist for a solution to the problem of violence among the young people in Holon. Coates was dressed in a grotesque costume which combined elements of archaic rituals and civilisation trash with brute pragmatism in an improvisational but also alternative way: he wore a badger as head gear and a track suit whose side stripes reproduced the pattern on the badger’s coat in a kind of mimicry. When the mayor had asked his question, the artist stood up and after a brief period of concentration spontaneously produced a series of incomprehensible, chortling, squeaking and exploding sounds. He then sat down again on his chair and reported to the mayor about his encounters in the animal kingdom, in particular with a plover which steers attackers from its nest by pretending to be injured. Coates interpreted this as a metaphor, as general human behaviour but also deciphered its specific significance in relation to the political conflict in Israel.

The artist has also acted out this kind of knowledge transfer from the non-human to the human consciousness in numerous other performances. In Radio Shaman (2006), for example, he discussed answers from shamanistic performances, which he had staged in problematic locations in the city, on the radio. The questions raised here concerned poverty, prostitution and the increasing spread of HIV which have become matters of urgency for the small community due to the high number of Nigerian immigrants there. In Journey to the Lower World (2003) he presented a performance in the style of a Siberian ritual for the residents of an Liverpool tower block largely populated by elderly people that was under imminent threat of demolition.

Embedded in topics relating to ornithology, zoology, anthropology and philosophy as well as the special relationship between culture and nature, which in England is rooted in the folk tradition (singing in bird voices, for example), Marcus Coates asks questions as to what constitutes and moulds both our individual and cultural consciousness by seeking to experience other forms of consciousness. As part of this his works associate, discuss and hybridise numerous artistic and societal phenomena which anticipate, suspect, fear and intuit extended forms of knowledge by transcending the concept of the subject and reality.

Bruce Nauman stated in a neon work that “The true artist helps the world by revealing mystic truths”; in 1974 Joseph Beuys spent three days with a wild coyote in a room in the René Block gallery in New York which had been transformed into a cage (Coyote, I Like America and America Likes Me, 1974); our fairytale world is full of half-human and half-animal creatures; the esoteric scene dismisses no possibility of the existence of extended forms of experience; sports people adopt numerous mental techniques and dictators and other politicians have repeatedly sought the advice of spiritual counsellors and clairvoyants and consulted mentors with access to other forms of knowledge.

Marcus Coates’s scenarios of the confrontation of being human and animal and his use of shamanistic practices leave the truth content of experience in abeyance in an artful, fascinating and irritating way. They unfold at the interface between imagination, facts and play and challenge the cultural systems of belief and control with ambiguous humour.
Films included in the exhibition: Kamikuchi (2006); Radio Shaman (2006); Rice Ritual (2006); Journey to the Lower World (2004); Human Report (2008); The Plover's Wing, A Meeting with the Mayor of Holon, Israel (2009).
www.kunsthallezurich.ch