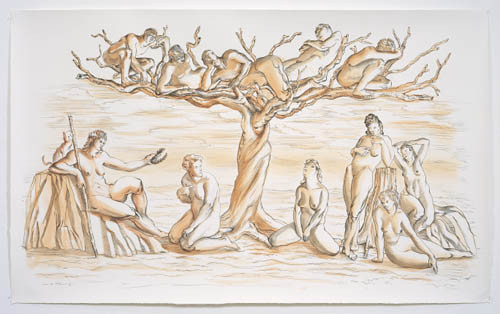 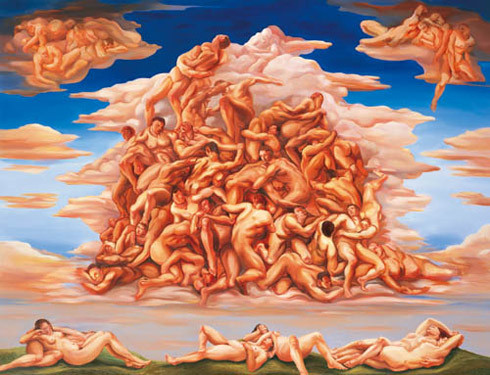 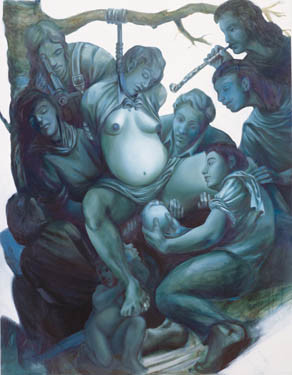 The American artist Nicole Eisenman (born 1965 in Verdun, France, lives and works in New York) has since the 1990s caught the eye with her figurative paintings that, playfully and with great artistic freedom, cross stylistic and compositional elements from the history of art from Renaissance painting to Modernism (but not Postmodernism) with comics, slapstick, TV culture, pornography and subcultural image strategies. The exhibition in Kunsthalle Zürich is the first comprehensive review of this artist in an institution. For their second touring venue, the almost 30 oil paintings and over 100 drawings will go on tour to Le Plateau in Paris in June.

Opulent group scenes, which go back to historical painting and the Social Realist wall paintings of the 1930s, appear next to portraits and mythological burlesques that are painted both in masterly style and in crude caricatures. What is central to Eisenman’s oeuvre is an excessive, drawing-based work complex that comprises all the classical picture genres and a wit formulated between the outrageous and the idiotic.

Nicole Eisenman’s work is an inspired and gleeful deconstruction of conventions in art and society and questions social models, above all by reversing female and male role clichés. At the beginning of the 1990s Nicole Eisenman made a name for herself with monumental murals and large-scale drawing installations in tune with her generation of artists who, in contrast to the dominance of photography and language in the work of their predecessors, established painting and sculpture as central to their personal vocabulary. In 1993 and 1994 she took part in two exhibitions that, independent of each other, took place in the ICA London and in New York’s New Museum and the Wight Art Gallery in California under the title Bad Girls, which presented so-called feminist positions in works that Marcia Tucker in the catalogue to the exhibit describes as: “irreverent, anti-ideological, nondoctrinaire, nondidactic, unpolemical and thoroughly unladylike.” Sue Williams, Nicola Tyson, Collier Schorr, Zoe Leonard, Helen Chadwick are only several of the names that bear mentioning in this context.

Nicole Eisenman’s figures move in lush dream worlds and idylls; they carry out familiar actions in familiar public locations, such as academies, museums, places of commerce, of sports and of politics. Eisenman’s work is about power relations and powerlessness, about art and commerce, consumerism and sex, about the possibilities made available by professionalism and dilettantism and how artistic success and everyday life are constructed. At the same time it deals with the subsequent question of how the individual and she herself as artist and woman can take up a position within these roles.

Eisenman’s narratives of grotesque reformulations of social orders or her depictions of human individuality are always interspersed with possible failure or scenic breakdown: the pictorial content, the painting procedure and the message contradict each other, deal with a state of decline in historical as well as current conventions. The work Dysfunctional Family (2000) shows a deceptive idyllic family: a baby looks with despair at its excrements; papa smokes a pipe and mama lasciviously opens her thighs. Eisenman portrays an ambivalent scene of highly charged behaviour in such a way that all actions could mean something else.

In her drawings and especially in her large-scale installations with works on paper and the most diverse materials, the artist often includes herself. In 1995 she took part in the Whitney Biennial with a large mural (Exploding Whitney) that showed the museum in ruins and with an installation of drawings entitled Whitney ‘Buy Any Ol’ Painting Sale’, which parodied the artist Eisenman, art and commerce alike, and whose position between punk, DIY, dilettantism and old-masterly skill made everyone sit up and take notice.

For the exhibition in Kunsthalle Zürich, the artist is planning to install a whole room with works on paper, objects and graffiti-like interventions that she calls a drawing clinic. The unfinished and the finished will be set side by side. Nicole Eisenman invites artists from Zurich to continue work on the abortive, incomplete works that she has abandoned. Her performative approach to an installation in an institutional context is paralleled by her routine treatment of art. The artist ‘publishes’ the (quite outrageous) e-zine “Ridykeulous”, in which she introduces the works of other female artists, and maintains an art blog on the Internet with the title “A Blog Called Nowhere”.

Nicole Eisenman’s newer paintings span a bridge between “bad” painting and – increasingly – sumptuous, impasto forms of abstraction. The work Progress: Real and Imagined (2006) is a monumental painting in two parts, populated by diverse scenes of civilization’s ideal and catastrophic cases, with Biblical echoes, cave men, ghosts, hunters and gatherers, wars, trade, destruction, violence and flying hamburgers that hang in the dramatic sky like zeppelins. From left to right the viewer wanders through an apocalyptic world to land in the world of art, of art-making and an ostensible rescue in the ark of imagination that rocks on the stormy waves of life’s ocean. There is even – alongside a slapstick-like lifebelt held above the water – a Swiss flag aloft in the wind and rising from one of the lifeboats that circle around the picture of an artist in his ark studio, whose imaginings and artistic realizations probably not only have created the broad stylist multiplicity painted in the picture, but also the simultaneity of all times and styles, all possibilities and catastrophes.
www.kunsthallezurich.ch