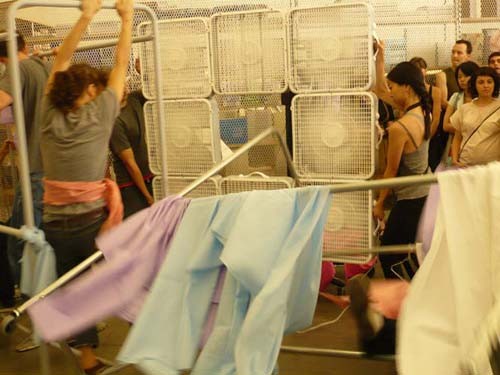 The exhibition «Non-solo show, Non-group show» borrows its title from a solo exhibition by the New York based Japanese artist Ei Arakawa staged at the Franco Soffiantino Gallery in Turin in 2008. Ei Arakawa invited two other artists, Nora Schultz and Henning Bohl, to participate with him in that exhibition. Based on this model, Kunsthalle Zürich invited Ei Arakawa, who in turn invited colleagues and collaborators, and four other artists to make individual presentations. Both projects will be presented simultaneously – spatially and temporally – and thus interweave the solo and group exhibition formats.

The eight artists involved in the exhibition – Ei Arakawa (*1977), who invited Nikolas Gambaroff (*1979), Nick Mauss (*1980) and Nora Schultz (*1975) to collaborate with him, and Kerstin Brätsch (*1979), who is represented along with Adele Röder (*1980) in the DAS INSTITUT group project, Klara Liden (*1979), Carissa Rodriguez (*1970) and Nora Schultz, who were invited to present individual projects – will stage their works jointly throughout the Kunsthalle, thus enabling viewers to experience areas with both individual works and collective projects.

The working methods and artistic approaches of the artists participating in the «Non-solo show, Non-group show» are characterized by a series of similar features: they explore and test the production and possibilities of meaning offered by traditional artistic media such as painting, sculpture, photography, duplication and printing process, and installations; they share an experimental and improvised handling of accessible, used and pre-fabricated materials; they play with ideas concerning the self-organisation of the collective and the actionist and generally adopt a performative approach to both their own works and their handling of materials and spaces. The testing of different forms of historical model of the meaning of art and works of art in the tradition of the modern avant-garde also plays a role in their work as does the varying of ideas of the artistic environment as a situation involving the performative model for the inclusion of the audience.

The exhibition at the Kunsthalle Zürich emerges as a cooperative venture between the participating actors and, along with existing individual works, includes objects created on-site, installations and spatial ensembles which, in turn, constitute both individual and collective works. This approach to the production of an exhibition interweaves ideas of Baroque temporary festive architecture with philosophical approaches to new forms of commonality, as formulated, for example by Giorgio Agamben and Simon Critchley. Interdisciplinary avant-garde models and artistic approaches to the negation of concretisations, the marketability of works and individuality, as implemented by groups like Jikken Kobo in Japan in the 1950s, play just as much a role here as the game with rules and chance in the form of the happening, questions about authorship and the reinterpretation of language and content as thematicised by the contemporary information society.

The on-site production of works in different formats will also continue in special performative events to be staged throughout the duration of the exhibition. In addition to the actual opening “event” there will be a one-off screening of the film Torse (1978) by Charles Atlas, which has only been shown publicly a few times hitherto. The film is a collaboration between this well-known collaborator and dancers from the company of dance legend Merce Cunningham, as well as the composer Maryanne Amacher whose dramatic staging of music and sound is distinguished by its use of architecture and serialized narrative. Torse presents a split-screen projection of an hour-long choreography by Cunningham whose work addresses dialectical questions of chance and rule.

Ei Arakawa is known for performances which he initially staged in an open group under the heading of “Grand Openings”. Arakawa and his collaborators create spatial situations that integrate the actors, audience and objects into a field of experiential moments and moments of realisation. The improvisation involves simple building materials, videos, choreographed sequences and printed banners or posters. At Kunsthalle Zürich, Arakawa will create different spatial situations and performative objects in collaboration with Nikolas Gambaroff, Nick Mauss and Nora Schultz. These will include structures with oversized mobile lanterns and an installation based on 325 two-alphabet monograms which represent specified concepts (for example, the names of well-known American TV series) but simultaneously function as random generators of language and poetic constructions through the accidental arrangement of monograms as a spatial installation. Therefore the installation also thematicises the rejection by the situationists of the cliché-ridden idea that art must be “poetic” in that it confronts it with the creation of the poetic situations of the experimental and the realisation of the poetic as a lived experience.

The Swedish artist Klara Liden creates spaces in which the audience is integrated into the experience of its own performativity. The artist builds these spaces on site with used, usually cheap materials. Liden nests into existing structures, alters their function and creates dense, psychologically loaded “special spaces” which are liberated from their normal function and propose different models of behaviour, feeling and acting. Time and again she also uses videos in these spaces that challenge societal conventions and role definitions and stimulate mental and physical reactions.

Nora Schultz’s minimal sculptures, slide shows, films and installations are composed of found materials which she examines for both political and societal topics and for abstract formal language as part of an intensive and direct exploration of a concrete reality, a given context. The artist reorganises her found materials, bends, rotates, transforms them – usually as part of a performative act in the exhibition space itself – into delicate sculptures which constitute quiet but nonetheless insistent commentaries on both artistic form and the presence of current and historical reality.

Kerstin Brätsch’s large-format paintings are based on a conceptual approach which shines the spotlight on the performative aspect of the image and the accompanying question of presentation, distribution and attribution of meaning. Together with Berlin artist Adele Röder, since 2007, Kerstin Brätsch has also been working for DAS INSTITUT, a project which – referring to the cliché of an import/export agency – offers both artists a platform to examine their individual works in terms of function-specific issues and to generally thematicise questions of design (pattern), advertising (announcement) and reproduction (copy) independently of identifiable authorship and simultaneously as a problem of artistic production.

Carissa Rodriguez, who acts as an artist, writer and gallerist, also explores questions concerning authorship, originality and collective conditions of production in her work. She will contribute a group of industrially produced textiles, ink jet prints and painting which work with ideas of repetition and difference, mass production and subjective interpretations of the "mass ornament" (a subtext that is perhaps the private life of the artist). A red dot “bleeds” as in a bad comic; the motif reappears on patterned fabrics that hang on numerous stretchers. She works with contemporary surfaces– as forms of currency and as narrative space. What is at stake are which forms get to play the game across the masculine/feminine divide. A text accompanies the installation.
www.kunsthallezurich.ch