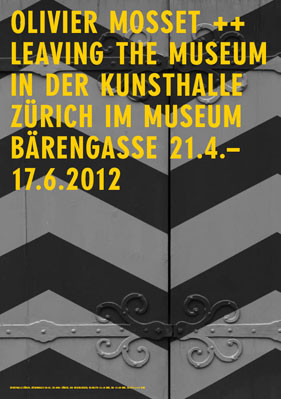 The Kunsthalle Zürich will mark the end of its temporary exhibition activity at the Museum Bärengasse with a project by Swiss artist Olivier Mosset (born in 1944 in Berne), which wasdeveloped specially for the exhibition space at the Museum Bärengasse. Mosset, who has lived in the USA since 1977, left Switzerland in 1962 and settled initially in Paris where he played a role in shaping the advent of the conceptual and radical in European painting: painting was no longer viewed as mere expression but as an attitude, a sign and, not least, a societal position. Mosset then gradually moved towards the monochrome and geometrical image with his approximately 200 circle paintings, which were created between 1966 and1974 and represent his version of the ‘zero point’ in painting, and from 1976 in his exploration of the connections between colours. Mosset’s radical approach to painting is characterised by expansive surfaces, the simplest of forms, lucid colours and repetition. His painting is constant intervention and instrument in the space, and his works are wall designs which alter the space by creating new dimensions through planes of colour.
www.kunsthallezurich.ch