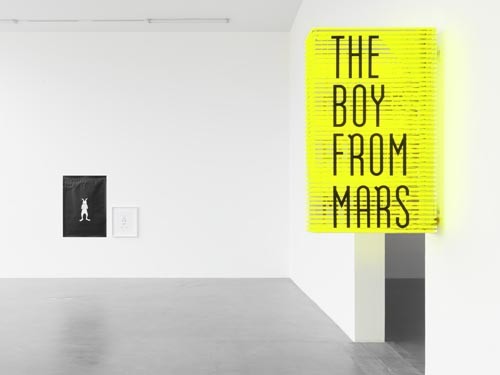 Philippe Parreno (born in Oran/Algeria in 1964, lives and works in Paris), realized in 2002 together with Pierre Huyghe the project «No Ghost just a Shell», a first comprehensive exhibition on all works involving the Manga character “Anlee” for Kunsthalle Zürich. Now he introduces himself with the solo exhibition «May»: At Kunsthalle the first episode or perciptable image from a planned series of “retrospective” exhibitions will take place. The other episodes, which will be presented in succession by the artist, will be shown at the Centre Pompidou in Paris (3 June to 7 September 2009), the Irish Museum of Modern Art in Dublin (4 November 2009 to 24 January 2010) and the CCS, Bard College, New York (spring 2010). Parreno will develop a specific “image” for each of the named institutions based on a particular aspect of his oeuvre.
Over the course of the past 20 years Philippe Parreno has produced a varied and complex body of work which is full of references, mental evocations and arguments relating to variants from literature, philosophy, science fiction, film, theatre and information formats such as radio, television and the internet. What is striking about this approach is that he does not debate the conventions of the history of visual art, i.e. painting and sculpture, but explores the traditional notions by playing with time, process and formats. Memories and projections assume a role that becomes more significant than the object itself.
“ This film lasts for 11 minutes and 40 seconds but 48 hours after being removed from its sealed package it will disappear from the support through a process of oxidation. The film has stereo sound and a song featured at the end. There are no computer generated special effects in this production. What you see in the picture was constructed in order to be filmed. This is a story of a film that produced a building and the story of an architecture which provided the scenario for a film. The film is one element of a two-headed mutant, one of two inseparable twins who share the same body. The building does exist somewhere in South East Asia.”
Philippe Parreno wrote this blurb for the film “The Boy from Mars” (2003), which he screened at the Friedrich Petzel Gallery in New York in 2005. He left DVDs of the film on a bookcase and presented them to the viewers as a gift. The film, which dissolved two days after being removed from its package, formed a work along with the bookcase which blocked the entrance to the exhibition in the gallery. The bookcase wall could be opened like a swing door using a mysterious lock mechanism – if the viewers managed to find it – and provided access to a room in which the collaborative work of Philippe Parreno and Rirkrit Tiravanija was on display.
The above-described installation and aforementioned film represent central themes in the work of the artist Philippe Parreno: An outstanding feature of Parreno’s work is the transformation of genres, in particular film, into visual art. Another important aspect is the exploration of the topic of the exhibition in itself. An artist’s “retrospective” must, therefore, make it possible to experience the exhibition as the central object of his analysis and is more than a mere list of chronologically relevant and representative works.
Parreno creates situations that allow things to assume a different form and through which playful new elements are established in visual art. These things are nurtured by the spirits of formats that are alien to art: he allows them to become cinema, philosophy, literature, science and fictions and embraces and involves mutants and hybrids, the imagination of creatures and beings that constantly change their form in our imaginations and perceptions. These include fairies, monsters, freaks, spirits and ghosts, phantoms, ventriloquists, doppelganger, hypnotists and seers, children, robots and other intelligent machines. In Parreno’s works, these all use fairytale, film and collective creativity to practise imaginatively transformed and theoretically-founded criticism of the conventional forms of exhibits and exhibitions.
Parreno creates autonomous (film)beings for exhibitions. As indicated by the title «May» he situates this exhibition in time. In an ongoing process of transformation of his works, Parreno finds his way to ever new formats and models for possible exhibition formats: the ghosts of his work return here as protagonists of their own identity.
The exhibition at the Kunsthalle Zürich, which features works created between the 1990s and the present day, provides an insight into the work of the artist on several narrative and evocative levels: nine Marquee works created since 2007 transform the spaces into a glowing field of possible cinemas entrances. They resemble the light-bulb-bedecked canopies of the world’s entertainment culture and are complemented by the neon sign “Boy from Mars” (2005), which could be announcing the 2003 film of the same name also on view at the exhibition. A series of drawings runs through the entire exhibition as a parallel narrative: monsters, which the children’s book illustrator Johan Olander, who lives in New York, developed for the work of Philippe Parreno – interpretations of an oeuvre – mutate to funny, threatening, shocking and amusing ogres. They are redrawn by Parreno himself who performs a double somersault of interpretation here. Thus the monsters are in communication with works which allow language, stories branching out in all directions and fictions to be present as spirits: hundreds of balloons in the form of speech bubbles, glass speakers, puppets, photographs of the artist, who is speaking to animals, a film which has “produced a building” and numerous stories which the monsters from the drawings want to begin...
www.kunsthallezurich.ch