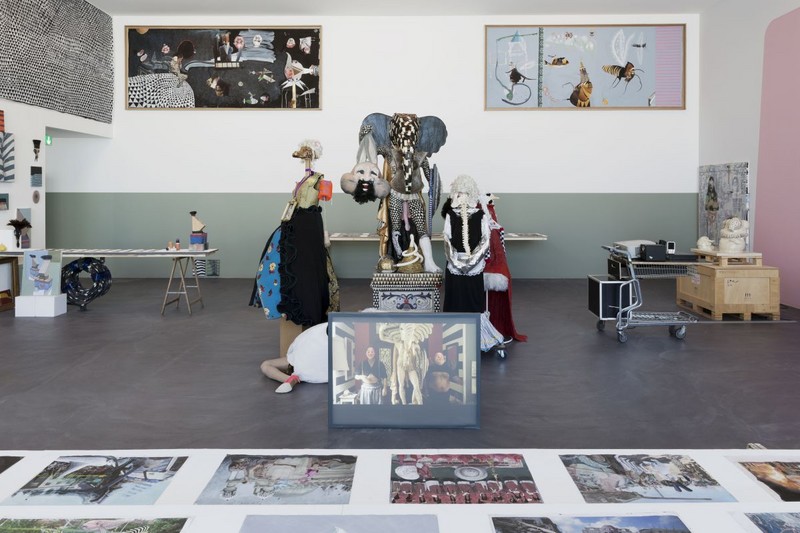 Arriving in Dubai at Al Barsha Street at the house where the three Iranian artists Ramin Haerizadeh (*1975), Rokni Haerizadeh (*1978) and Hesam Rahmanian (*1980) currently live, you might think, “Wow, this is eccentric.” Yes, it is an extraordinary villa full of things, but it is also a stage, a film set and movie theatre. It is their studio and a cabinet of curiosity; it is a test site-cum-monastery, an academy-cum-pleasure dome. The house informs their art as it results from both collective and individual endeavor — and half of it just has been shipped to Kunsthalle Zürich.

Ramin Haerizadeh, Rokni Haerizadeh and Hesam Rahmanian work both individually and in collaboration, but do not form a collective. Their art translates into multiple forms — films, installations, artworks and exhibitions — and often evolves around friends, other artists or people they meet by chance. This includes Iranian artist Niyaz Azadikhah and her sister, a DJ, Nesa Azadikhah, Iranian sculptor Bita Fayyazi, polyglot writer Nazli Ghassemi, American artist Lonnie Holley, gallery manager Minnie McIntyre, Iranian graphic designer and artist Iman Raad, Maaziar Sadr, who works for a telecommunications company in the Emirates, Tamil friends Edward St and Indrani Sirisena. Sometimes these people occupy central roles, sometimes they are marginal, but in either case they bring with them a reality that interrupts the trio's universe and language, and channels their – and our – attention in unexpected territories.

Another important strategy in their practice is the inclusion of various artistic worlds that are as respectfully acknowledged as they are shamelessly appropriated and adapted. This ranges from artworks and objects held in their own private collection to broader aspects of Iranian culture. Confronted with their projects, their thinking and art-making, one can learn a great deal about how Iranian artists have absorbed modernity – how, for instance, filmmakers, cartoonists and artists such as Ardeshir Mohasses, Ali Hatami, Mahmoud Khan Saba, Kamran Shirdel, or Noureddin Zarrinkelk combined Persian culture with Western influences and vernacular traditions. One realises that there is another chapter of (dissident) modernity yet to be written.

These are some of the main ingredients to the exhibition, which partly transforms Kunsthalle Zürich into their house to offer us the trio’s artistic universe through films, wall paintings, sound, a new floor, and an eclectic collection of their and other artists’ works. Just like Al Barsha Street, Kunsthalle Zürich will be the center of a centrifugal world where divergent directions (and laughter) abound, and where one starts to wonder how it all holds together. Through aesthetics, one could argue, through the languages that they develop (and are still developing), and through that thing called art, which, in their case, is of stunning precision and craft backed up by broad, passionate, and generously shared knowledge. This makes their collaboration a model for how to approach a multi-directional, if not multi-chaotic, world as well as an art institution like Kunsthalle Zürich.

Slice A Slanted Arc Into Dry Paper Sky is the first institutional exhibition of the trio in Europe.

* From the poem “I Still Think About That Crow“ written by Iranian poet Ahmad Shamlu in homage to Nima Yooshij, considered the father of modern Persian poetry. Translated from Farsi in collaboration with Christopher Lord as part of the trio’s “Unfaithful Poem Project.“
www.kunsthallezurich.ch