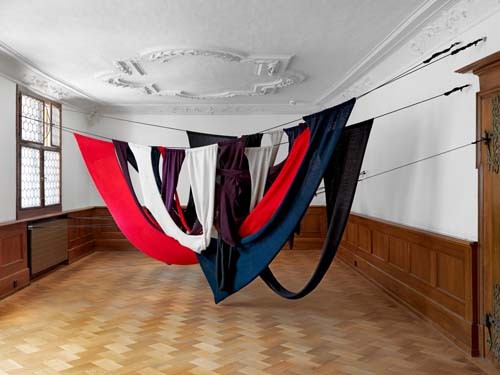 The expression “town-gown conflict” describes centres of conflict in the urban life of university cities, in which the campus and students in their academic garb test the societal balance. The conflicts associated with the gown-wearers encompass social differences, educational shortfalls, mechanisms of social differentiation, segregation and the demonstration of the superiority of the educated classes over the “productive” members of society. Together with Verena Dengler, Lucile Desamory, Caitlin Keogh, Beca Lipscombe, pelican avenue and Elizabeth Radcliffe, Scottish artist Lucy McKenzie (born in Glasgow in 1977, lives and works in Brussels) brings together artists and fashion designers for the exhibition «Town-Gown Conflict», whose drafts and finished works of both art and so-called applied art explore topics relating to social formatting. Located in the field of tension between collective and individual approaches, the boundaries between the artistic original, anonymous design and traditional craft techniques, their works invalidate preconceived ideas about art, applied art and fashion. Lucy McKenzie herself studied art at the Duncan of Jordanstone College of Art and Design in Dundee and at the Academy of Fine Arts in Karlsruhe, and has recently completed a further qualification focused on traditional art techniques at the Institut supérieur de peintre Van Der Kelen-Logelain, a college of illusion painting and decoration in Brussels. Lucy McKenzie’s works include paintings which challenge the traditional notion of this genre using concepts from drawing and illustration. Together with installations, album covers and other works, she creates murals inspired by the painted advertising images found in cities, which straddle the border between visual and applied art, and fabric designs. Topics regarding the local and everyday aesthetic play just as much a role in her works as the familiar appearance of things that have degenerated from high culture to everyday culture and have become collective as a result. Her myriad activities constantly exceed the narrow confines of visual art, be it through her involvement in social projects, such as the Nova Popularna speakeasy/artist salon in Warsaw (with Paulina Olowska), the Charisma gallery (with Keith Farquhar), her record label Decemberism, or in numerous exhibitions, for which she transforms invitations to stage solo shows into thematic group exhibitions that enabled viewers to experience her pioneering approaches on a collective level. Together with fashion designer Beca Lipscombe and illustrator Bernie Reid (both from Edinburgh), in 2007 she founded Atelier, a company that carries out design projects for public and semi-private spaces with a particular emphasis on applied arts and artisan techniques. The group exhibition «Town-Gown Conflict», which was initiated by Lucy McKenzie, explores all of this through the specific lens of “fashion”.

The role of textiles in 20th-century art is predominantly that of an accompaniment to the grand narrative, in many instances produced by notable women: Sophie Taeuber-Arp, Sonia Delaunay, the female practitioners of the Russian avant garde, the Bauhaus and the Wiener Werkstätte. Outside the orbit of Modernism, however, the handicrafts have a history of their own, and their marginalisation has often been exploited by female artists in their desire to challenge the masculine viewpoint as a default setting. Over time, these feminist strategies have been absorbed and co-opted by male artists wishing to capitalise on the critical power they naturally contain. «Town-Gown Conflict» presents a selection of female artists who use textiles in a variety of ways and with diverse intentions. The objective of the exhibition is not to re-politicise the medium, but rather to divest it of its over-simplified symbolic status as “women’s work”, and to present it instead as the rich and flexible medium it is, both in itself and as part of a wider set of artistic and commercial questions. Textiles are defined in «Town-Gown Conflict» as encompassing fashion – both hand and industrially produced – as well as its display, distribution and documentation. It also represents craft in the form of tapestry weaving, embroidery and fabrics for interiors.

The designers Carolin Lerch (Belgium) – working under the name pelican avenue – and Beca Lipscombe (UK) both utilise small-scale, local industrial production and particularly creative forms of presentation. Since 2004, pelican avenue has specialised in innovative construction of digitally printed and woven garments for men and women, which are shown as seasonal collections in combination with performance, live music and film. Designing under her own name since 2001, and with Lucy McKenzie as part of Atelier since 2011, Lipscombe reinvests traditional shapes with a calibrated and modest contemporary flair. She has publicised her work with fabric posters for fictional events, and uses the two-dimensional tapestry mannequins woven by her mother Elizabeth Radcliffe (UK) as a component of display. Edinburgh, where Radcliffe has worked and taught since the 1980s, is a renowned centre for modern tapestry weaving. Her two- and three-dimensional trompe-l'oeil figures are within the playful British Pop Art sensibility typified by such local artists as Archie Brennan and Eduardo Paolozzi.

Textiles are chosen as both inspiration and medium in the drawings, paintings, prints and sculptures of the artists Verena Dengler (Austria) and Caitlin Keogh (US). Dengler examines the transition from the avant-garde to the everyday application of pattern and how it is modified for mass consumption, as exemplified by the hobby tapestry kits of the firm Tapex Vienna. In this way she extends the discourse upon which design practice in Vienna is historically based, and thus engages with her surroundings directly. The photograph by Cecil Beaton of a model posed in front of a Jackson Pollock painting illustrates the historic partnership of fine art and fashion. It is an image Keogh references repeatedly in her drawings. These drawings, and also her paintings that are based on elaborate patterns, are used for the display and promotion of her sister Molly Keogh's fashion label Osei-Duro, based in Ghana. Together these elements form a practice at the critical intersection between art and craft.

For the Belgian artist Lucile Desamory (lives and works in Berlin), materials are things to be used with the utmost precision, and are chosen for their psychic, historic and sexual resonance. In her broad practice, which has included diorama, film-making and live performance, her fabric and embroidery pieces specifically capitalise on the ability of textiles to suggest human and non-human flesh, hair and corporeality. Lucy McKenzie also uses textiles as a component in something wider. Working with Beca Lipscombe as part of Atelier, she has recently produced a clothing collection, which included artists’ workcoats that are available for the public to buy. For the exhibition she presents indirect trompe-l'oeil portraits of several people in the textiles industry.
www.kunsthallezurich.ch