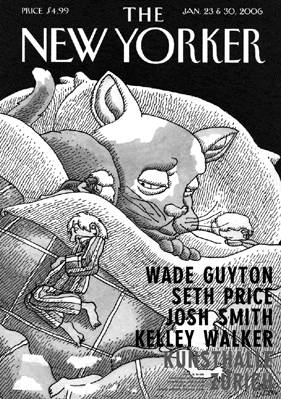 They squeeze canvases through ink-jet printers, paint over digitally altered images from the media with chocolate, scan freshly chopped fruits and vegetables, gold plate recycling emblems which are transformed into sculptures. In a variety of ways they intervene in digitally recorded material from art history, the media and advertising, overtax the concept of authorship by making exaggerated use of their own name for paintings, collages, drawings and countless photocopies of them, and cite from art history in the form of reliefs molded into cheap plastic. They sample music, text and image without identifying the respective author, return materials from art history and literature as digital print copies into public circulation, and they torment every conceivable, employable technology of our everyday digital lives such as reproduction technology by combining them with unsuitable materials and equally unsuitable applications.
Wade Guyton (1972, Indiana), Seth Price (1973, Jerusalem), Josh Smith (1976, Tennessee) and Kelley Walker (1969, Georgia) live in New York. Referring to their works collectively by using the word “they” is deliberately misleading since the works by the four artists not only differ visually but also vary visibly in their individual approaches.
The four artists do not form an artists’ group, even though Wade Guyton and Kelley Walker have often organised joint exhibitions and all four artists realise joint projects in ever varying constellations – often complemented by other creative persons and theoreticians. Take for instance “Continuous Project”, an ongoing New York collective who re-start discussing historic material such as pioneering art history magazines but also the writings by dubious historical figures; or the Web site “Distributed History” that Seth Price operates, which makes accessible his own selected projects as those of other people in a kind of cooperative meta level.
As such, the joint exhibition by the four artists at Kunsthalle Zürich is neither a group exhibition with an underlying theme nor a collaboration initiated by a curator but focuses on the respective identity of the four artists: each presents himself with a comprehensive collection of new works, while the details of the presentation in Kunsthalle Zürich are worked out on site, taking up and experimenting with the classic concept of the installation.
Wade Guyton’s works are based on a penetration of the everyday by appropriating from art history, especially the aesthetic and ideological approaches of Constructivism and Concrete Art, which holds a very evident tradition in Switzerland. He prints over materials from art history books, “paints” by having printing machines print out digitally altered material on canvas or translates popular everyday design into sculptures.
Seth Price presses art history into packaging materials, repeats and samples materials from art, music, literature and film to eccentric new shapes both in regard to their material and their medial implementation. In addition to videos, which are created without a camera, he arranges digital material in every conceivable form, in order to address topics of distribution and identification.
Kelley Walker also uses existing material from art, the media and advertising: brand aestheticism, media images, everyday branding are contaminated with reality and degraded in his works, for instance when he re-works digitally altered heterogeneous material by painting it over with chocolate.
What all of them have in common is a Post-Pop attitude that is arguably capable of lending all the ‘things’ of the world an individual and autonomous status of the real. A re-issuing of Pop using other means, namely those of tracing the materialised (but also perverted) influence of artistic strategies through advertising, the media and the everyday.
Josh Smith, whose works deal obsessively with his own (universal) name, which he features as the sole iconography of his paintings, drawings and collages, and which he replicates into infinity with his equally obsessive practice of photocopying, operates in this artistic field like the proverbial reverse of the coin, yet still addresses the same topic: All four artists address a reality, which is just as much formed by the sublimation strategies of art and its marketing as by the images which are spread through the Internet and digital copying. This might possibly result in a different form of cooperation, which is based precisely on the overlapping and shifting terms of authorship and copyright, a so called collective creativity, which rests on the appropriation of available reality free of ideology and hierarchy.
www.kunsthallezurich.ch