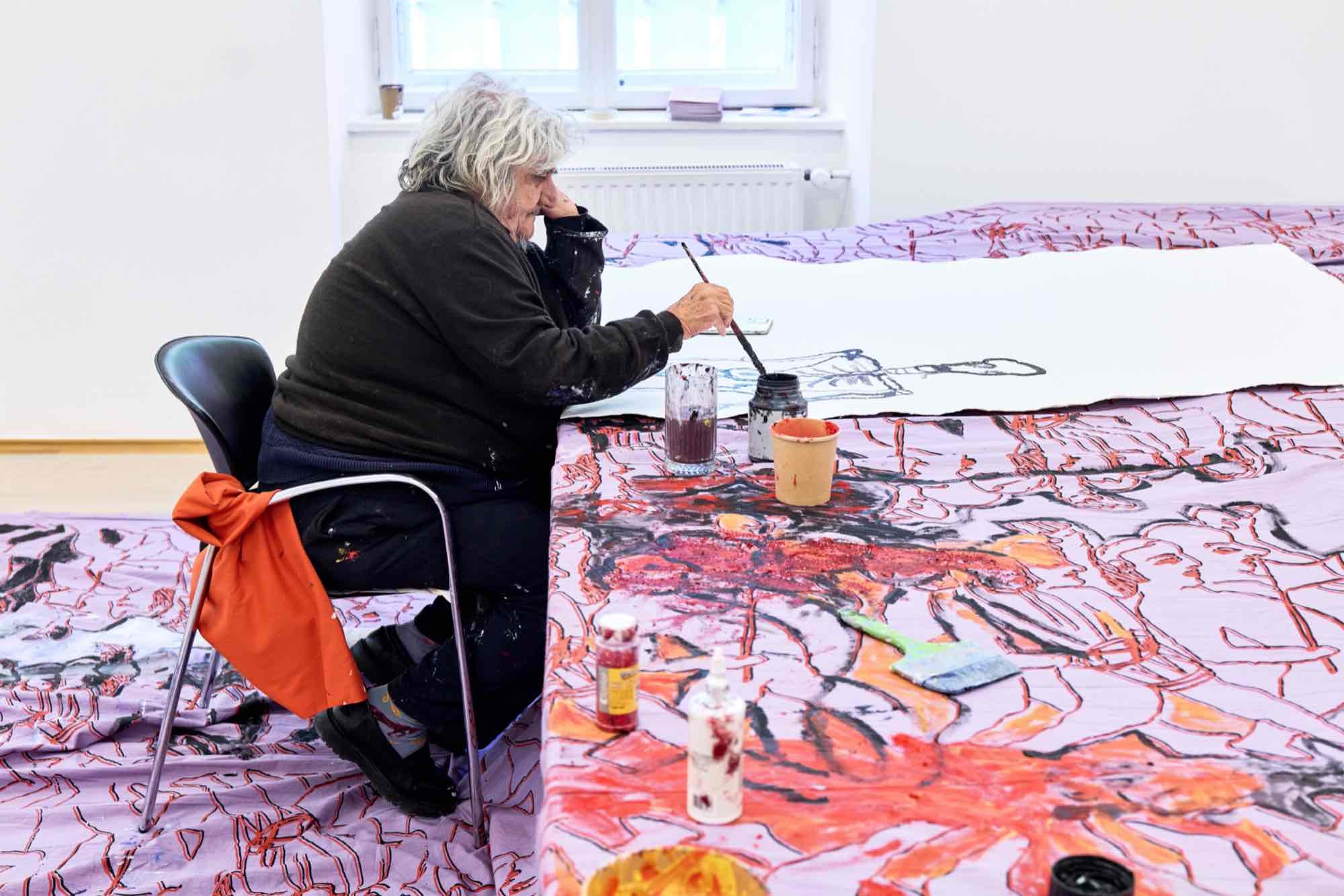 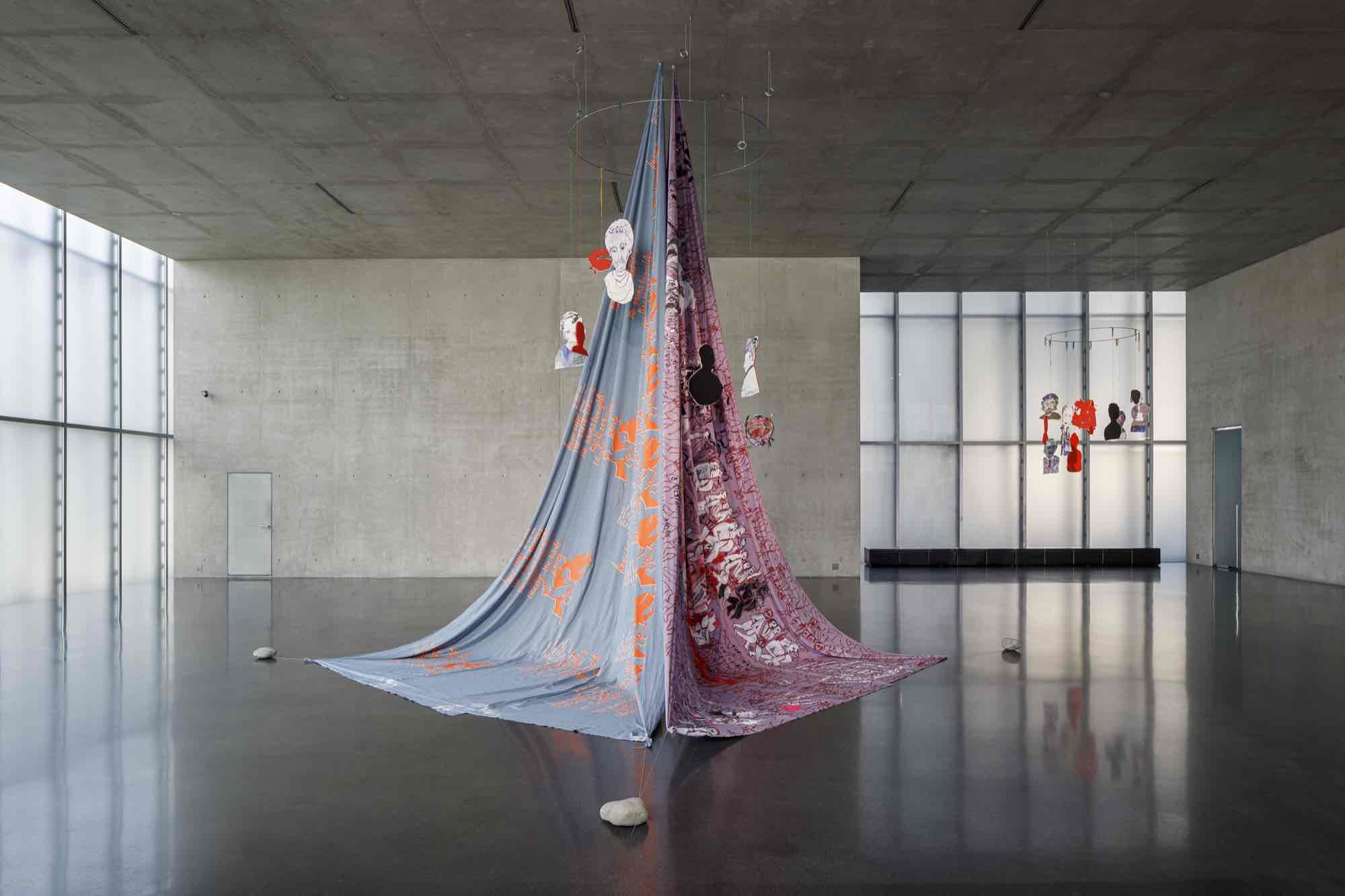 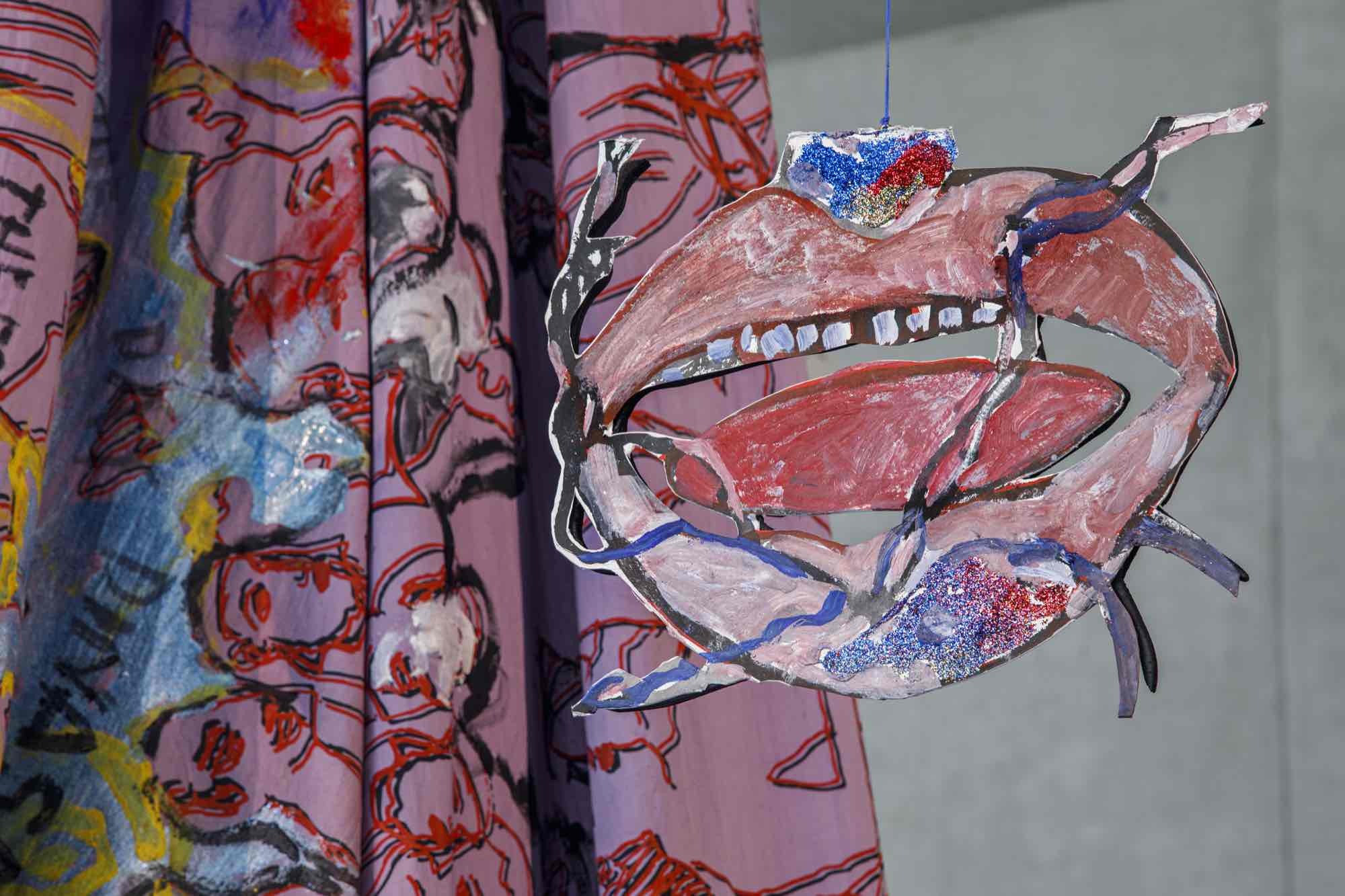 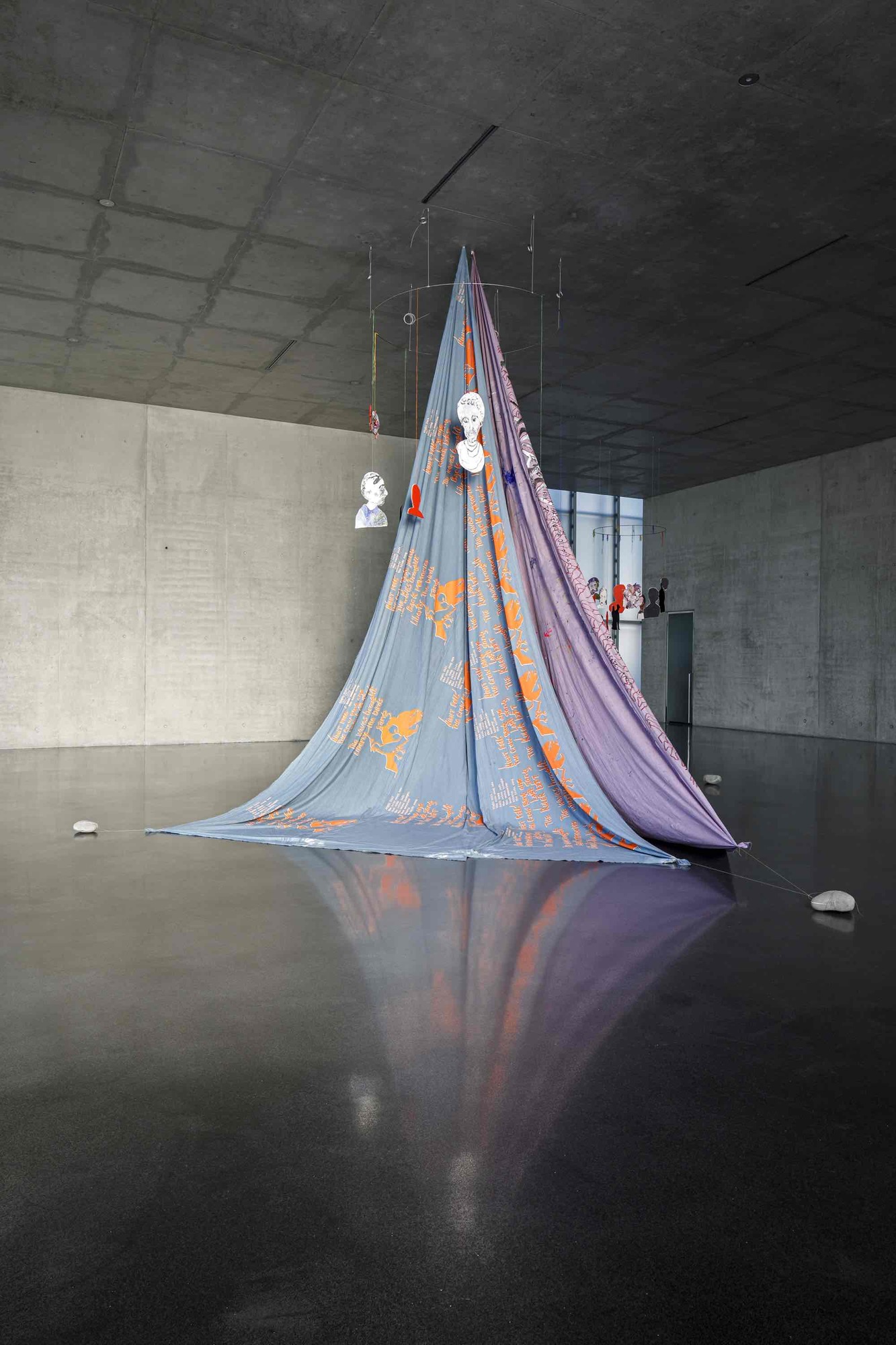 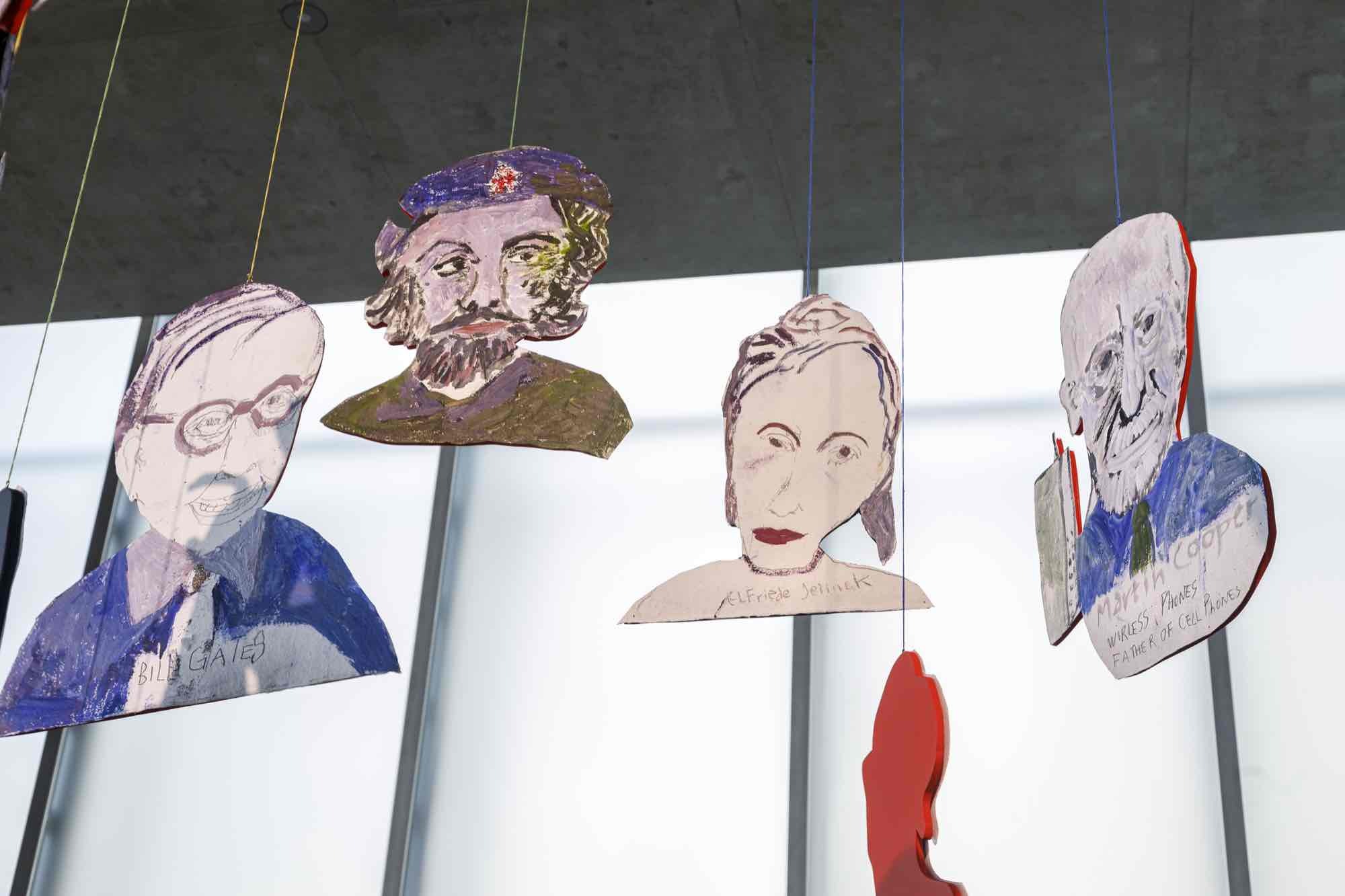 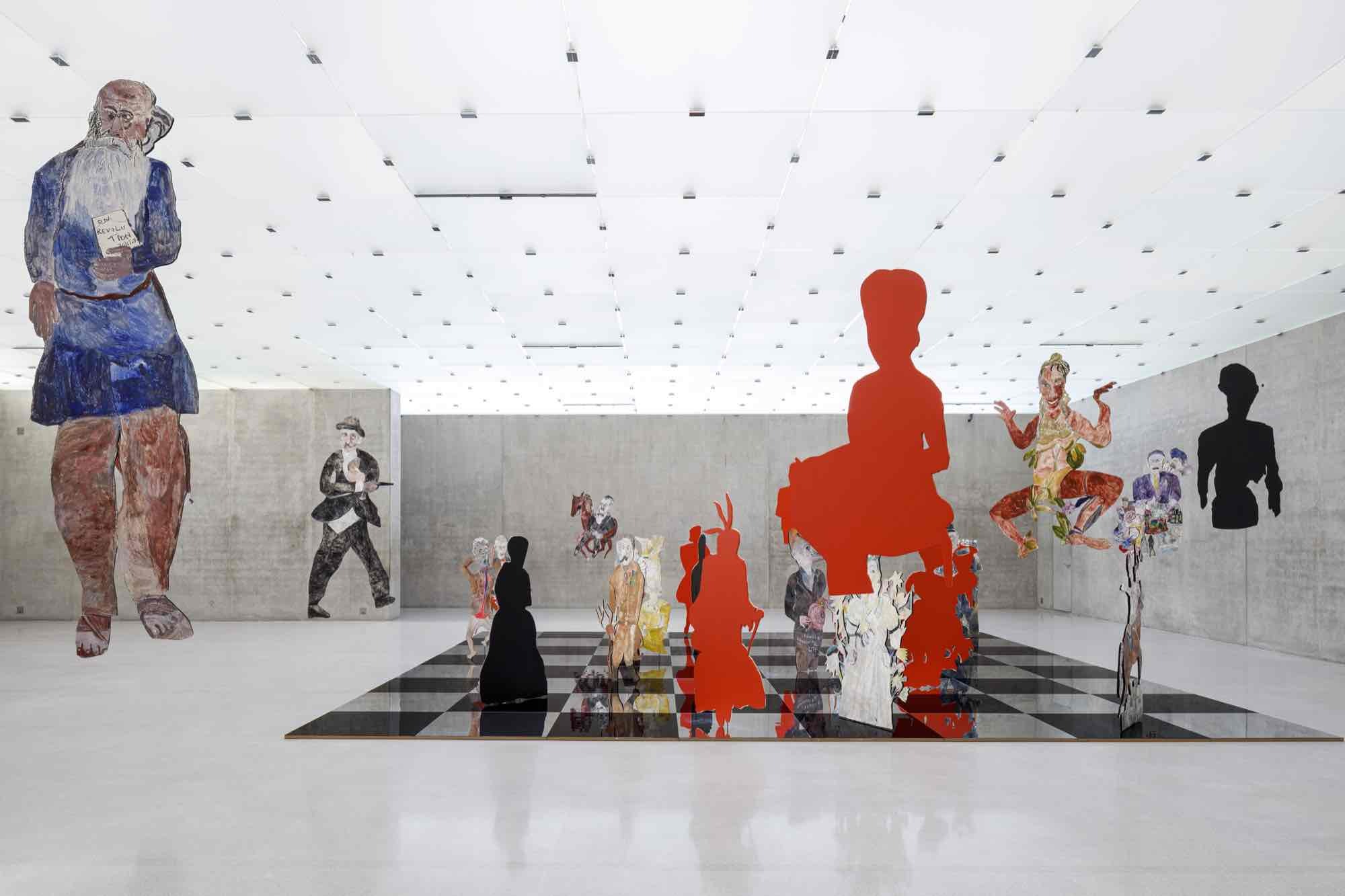 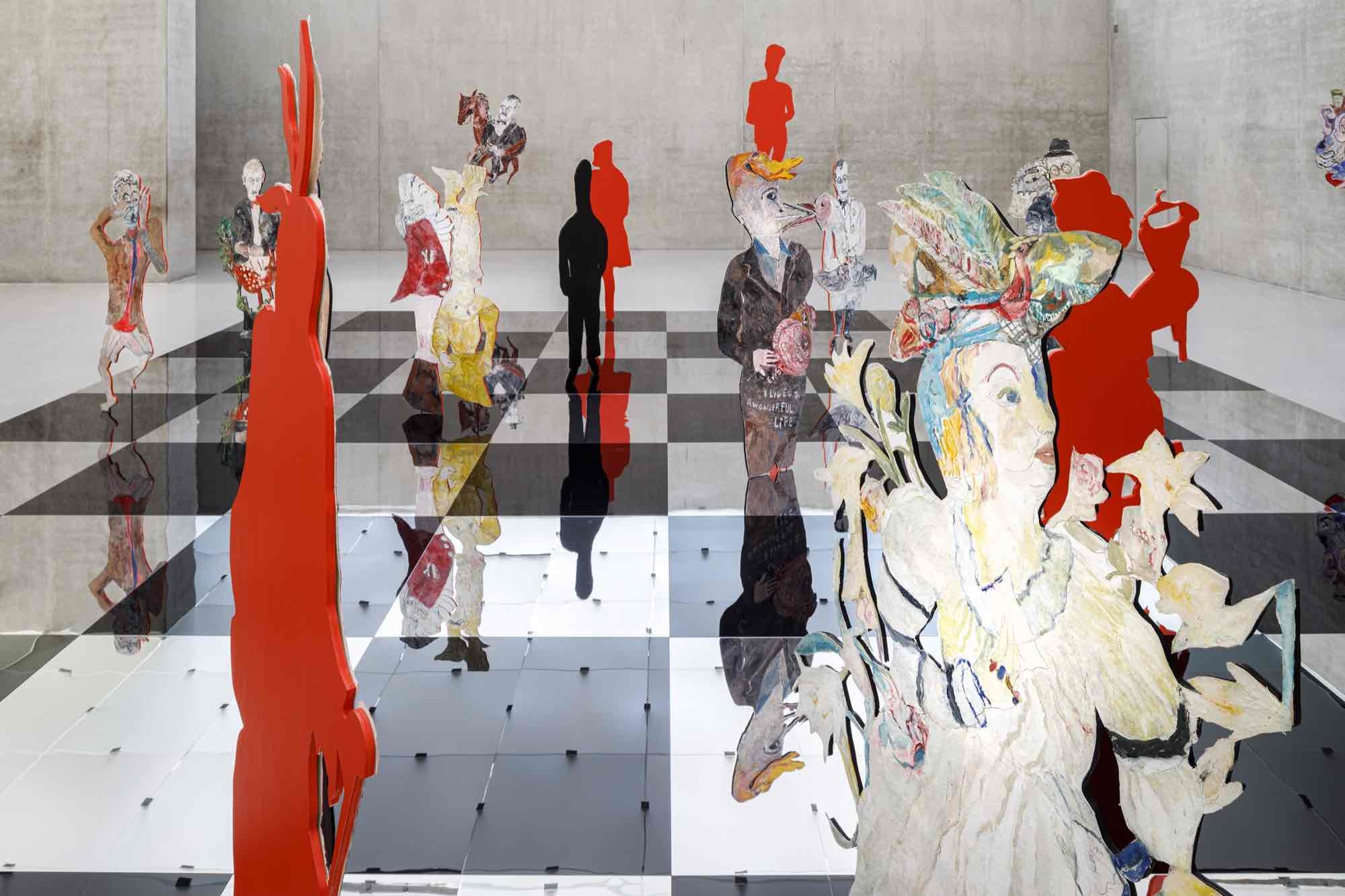 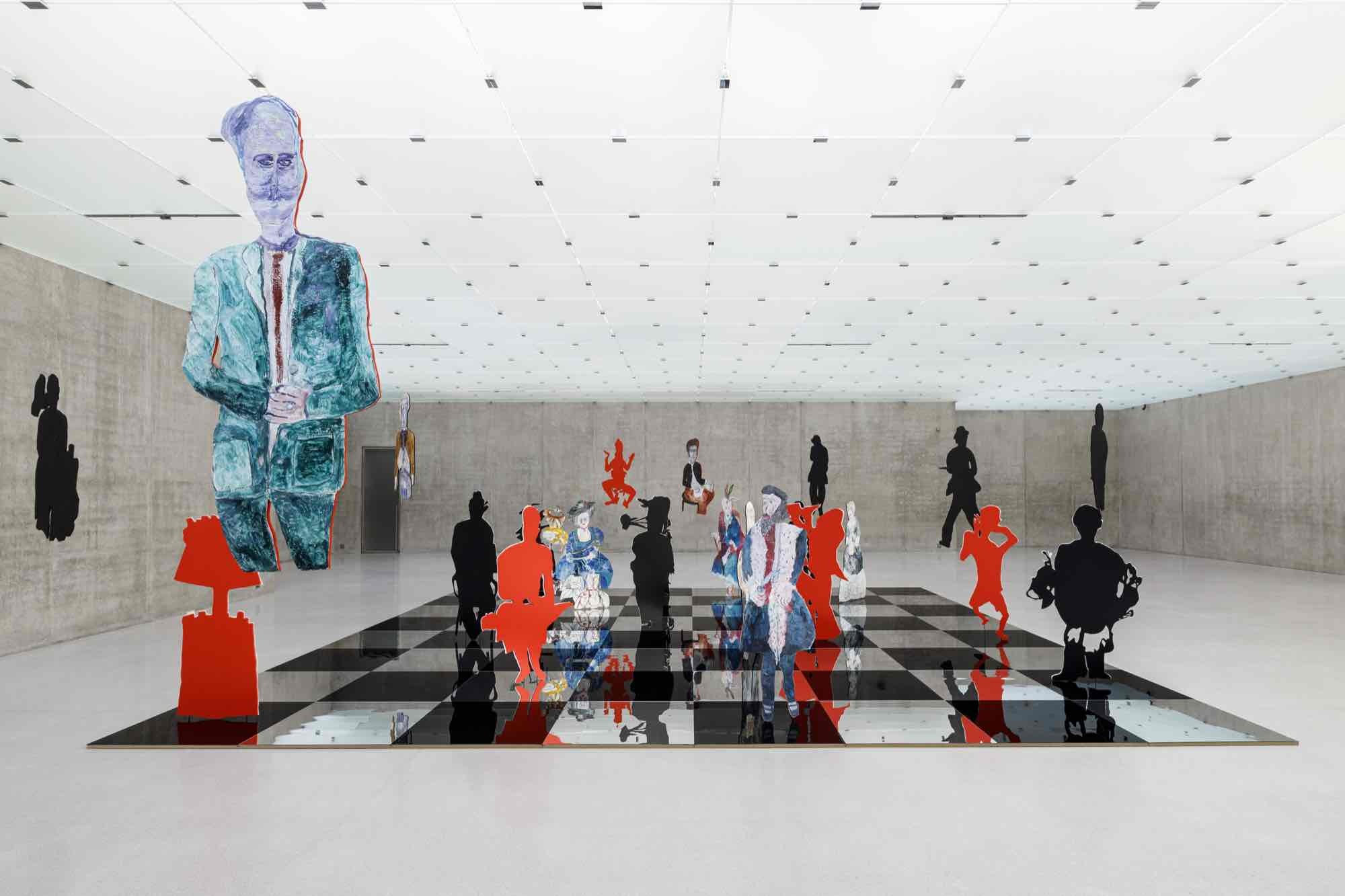 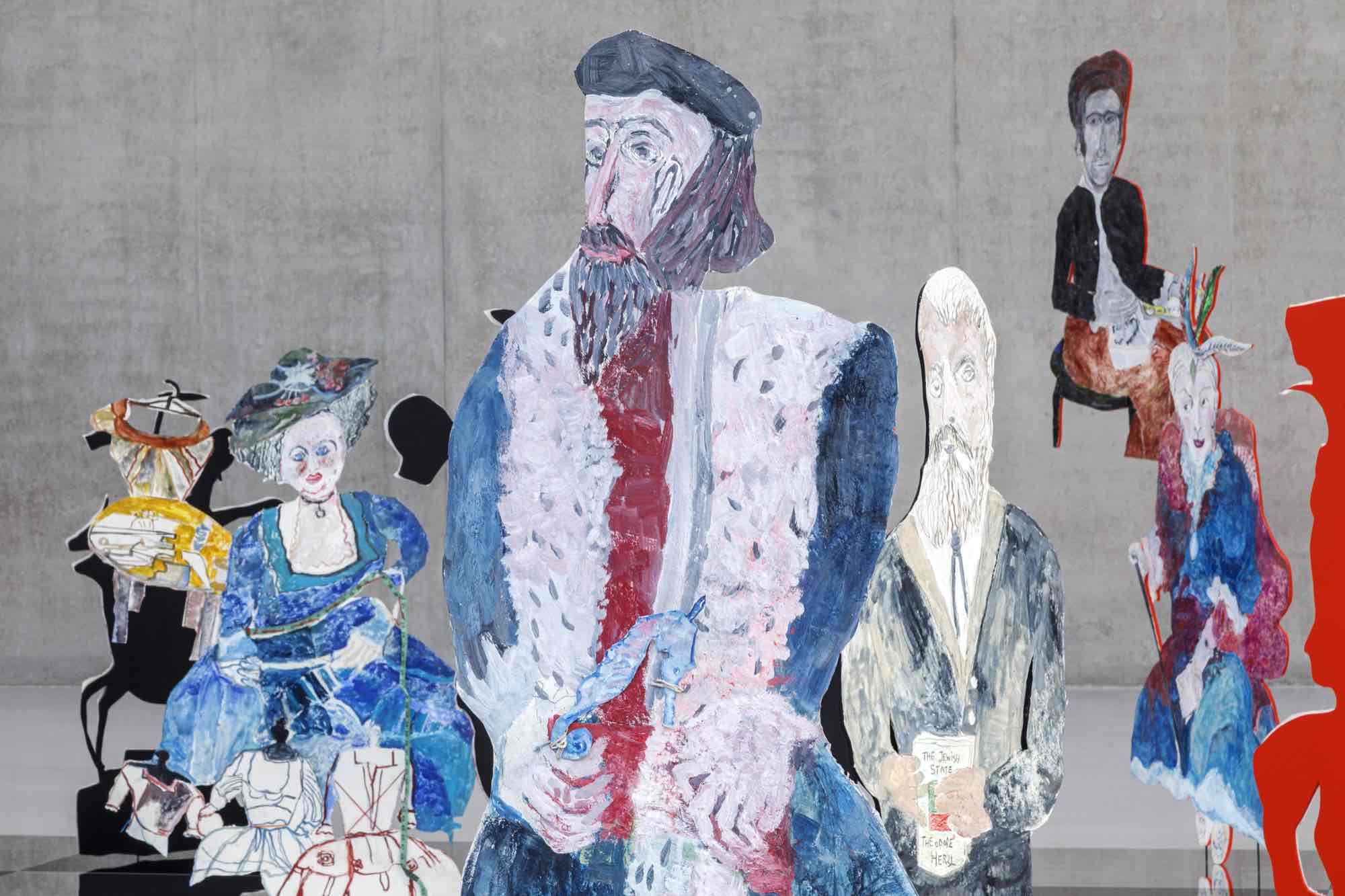 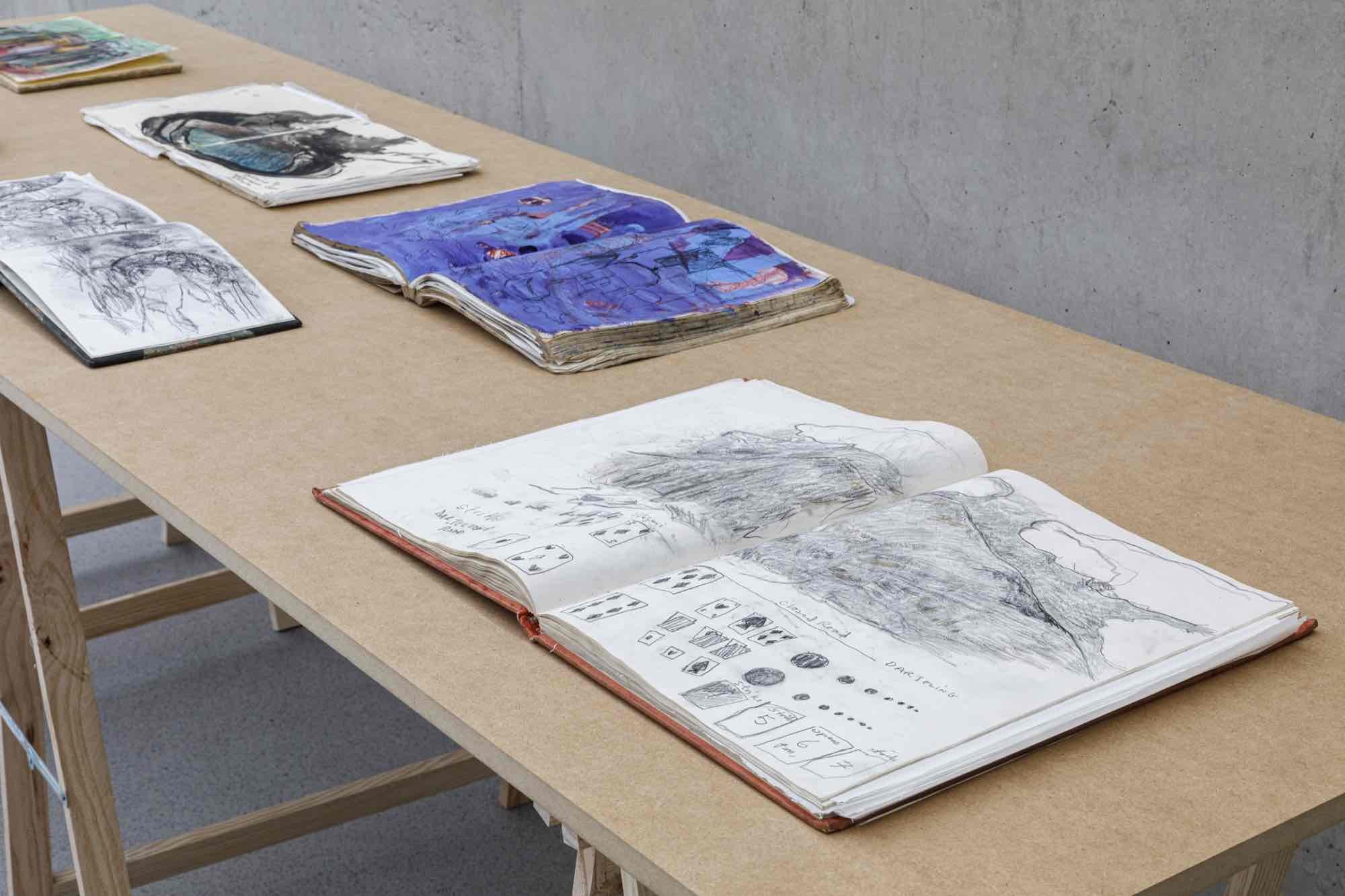 Anna Boghiguian
Travel books
Installation view first floor, Kunsthaus Bregenz, 2022
Photo: Markus Tretter
Courtesy of the artist
© Anna Boghiguian, Kunsthaus Bregenz
Several sails are suspended in the foyer. The colored linens are printed with drawings in repeat: the screen print depicts a group of people marching close together at a rally. Similar to ancient Egyptian renderings, the figures are drawn with large eyes. One person beats a drum while another, farther ahead, carries a flag.

Anna Boghiguian depicts political protest movements. Her works deal with servitude and rebellion, tyranny and the desire for freedom, leadership and liberation. Awarded the Golden Lion at the Venice Biennale in 2015, Boghiguian has Armenian roots and grew up in Cairo, where she lives again today. Boghiguian is a politically interested and philosophically minded storyteller who links past and present, similar to the murdered Egyptian Nobel Prize for Literature winner Naguib Mahfouz, a close friend of hers for whom she designed a series of book covers. For her exhibition at the Kunsthaus Bregenz, Boghiguian is exploring the revolutionary upheavals in France and the United States of the eighteenth century and the history of the Soviet Union, Nazi Germany, Austria, and Egypt. The works on view in Bregenz were created specifically for the show. During a several-weeks-long residency in the city, the artist devoted herself to historical research, creating drawings and handwritten notes in the rooms of the neighboring post office building.

Exhibited on the first floor are life-sized cutout figures on a mirrored chessboard. Boghiguian outfitted the back side of the silhouettes with red or black plates and painted the front sides with wax paint. The artist developed the idea for the ensemble titled The Chess Game for kub in Venice in the spring of 2022. With this exhibition at the historic Scuola di San Pasquale, Kunsthaus Bregenz celebrated its twentyfifth anniversary, bringing together works by Otobong Nkanga and Anna Boghiguian, including the latter’s installation.

At the center of The Chess Game is the Austrian-born queen of France Marie Antoinette. She appears colorfully and lightly dressed, with a striking hat by her milliner and dressmaker, Rose Bertin, who is likewise represented as a character on the board. Marie Antoinette’s mother, Empress Maria Theresia, joins the ensemble next to her. Further figures include the artist Egon Schiele, shown with a mask protecting him against the Spanish flu; the Habsburg heir to the throne who was assassinated in Sarajevo, Franz Ferdinand, with mustache and hunting rifle; Ferdinand I, king of Lombardy-Venetia in the nineteenth century; Theodor Herzl, the founder of Zionism; Sigmund Freud; and other historical notables. Appearing in the back of the chessboard is Aribert Heim, a figure of key importance for Boghiguian. Heim – like most of the people depicted here, of Austrian origin – was the camp physician at the Mauthausen concentration camp and known among the prisoners as “Dr. Death”. After the war, he spent several years in Germany before fleeing to Egypt, where he lived undisturbed in a hotel in Cairo until his death. For her solo show in Bregenz, Boghiguian expanded the chess ensemble: nine figures now float above the chessboard, including Jean-Jacques Rousseau, Leo Tolstoi, Rudolf Steiner, Stefan Zweig, Friedrich Nietzsche, and Josephine Baker.

Displayed on the second floor are over a hundred drawings that Boghiguian made in advance of the exhibition, some of which show Heim’s residence in Cairo. A number of the drawings were created on a research trip in Berlin, where Heim owned an apartment building, others while the artist made a visit to France. At Versailles, Boghiguian drew the signing of the peace treaty in the palace’s Hall of Mirrors, which ended World War I, as well as Jean-Jacques Rousseau, whose books inspired Marie Antoinette. The drawings also include images of a guillotine, scenes from the Haitian Revolution, and the back of the Statue of Liberty. The figures crowding the images are drawn in a caricature-like manner and unfailingly rendered with expressive lines. The color scheme in the works alternates between pale opaque white and luminous color. Boghiguian’s painting technique recalls that of Honoré Daumier or the expressive gestures of James Ensor. Many of her sheets show the contrast between political leaders and the people at their mercy. Next to a caricature of Aribert Heim, whose rows of teeth Boghiguian painted double, appears an impressive triple portrait against an empty background: Josef Stalin, Vladimir Lenin, and Leon Trotsky in dirty black and gray.

Installed on the third floor is a circular, mirrored platform; a disco ball bathes the space in an atmospheric light. On the ceiling hangs a model of a guillotine – an instrument of capital punishment, reminiscent in its presentation of the electric chair in Andy Warhol’s silkscreen series. In this work, too, Boghiguian addresses the terror unleashed by ruling elites, the slaughter of political opponents, the competing of ideologies and ideas that goes hand in hand with violence. A text written by the artist and plays as a sound piece in the space. Once again, Marie Antoinette and Jean-Jacques Rousseau appear as protagonists, but so do the people in the mob who fought against hunger and domination.

Anna Boghiguian (b. 1946 in Cairo) is an Egyptian-Canadian artist of Armenian descent. She studied Political Science and Economics at the American University in Cairo until 1969, subsequently studying Visual Arts and Music at Concordia University in Montreal, followed by several years of traveling. Since 2010 she has been creating three-dimensional settings that she presents like stage sets. Boghiguian has also illustrated several books, including a volume of poetry by Constantine P. Cavafy and book covers for Naguib Mahfouz, winner of the Nobel Prize in Literature.