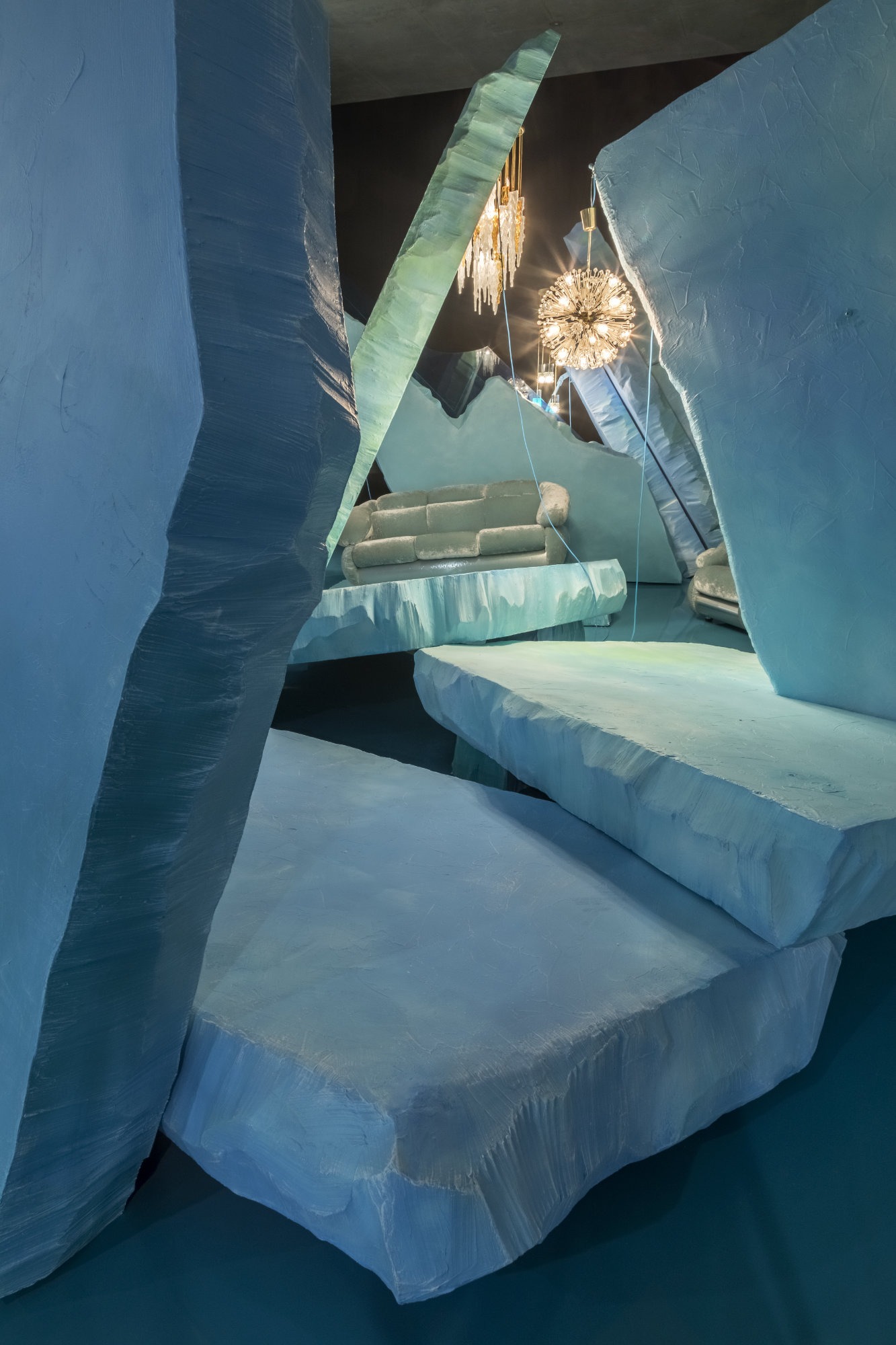 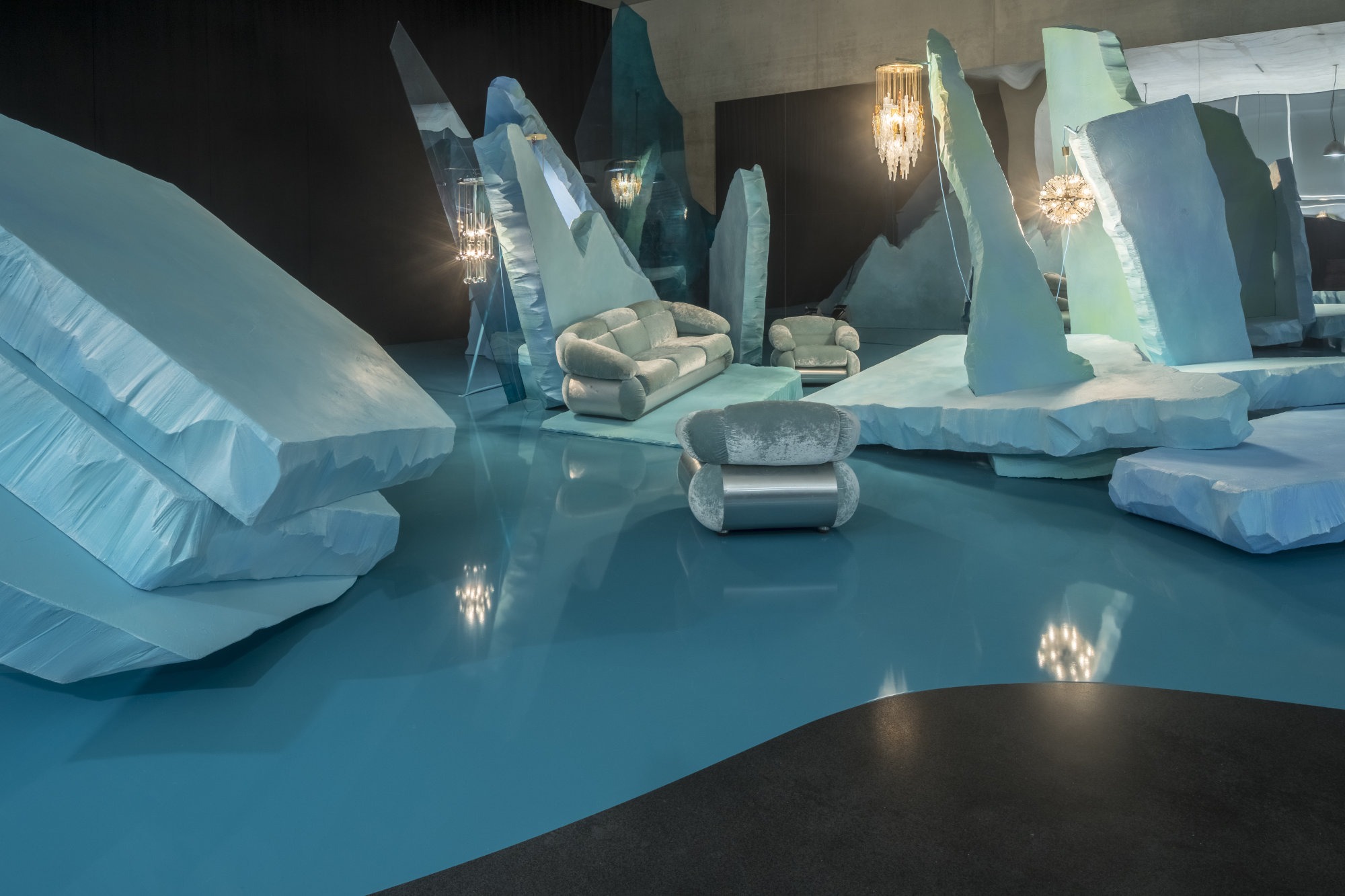 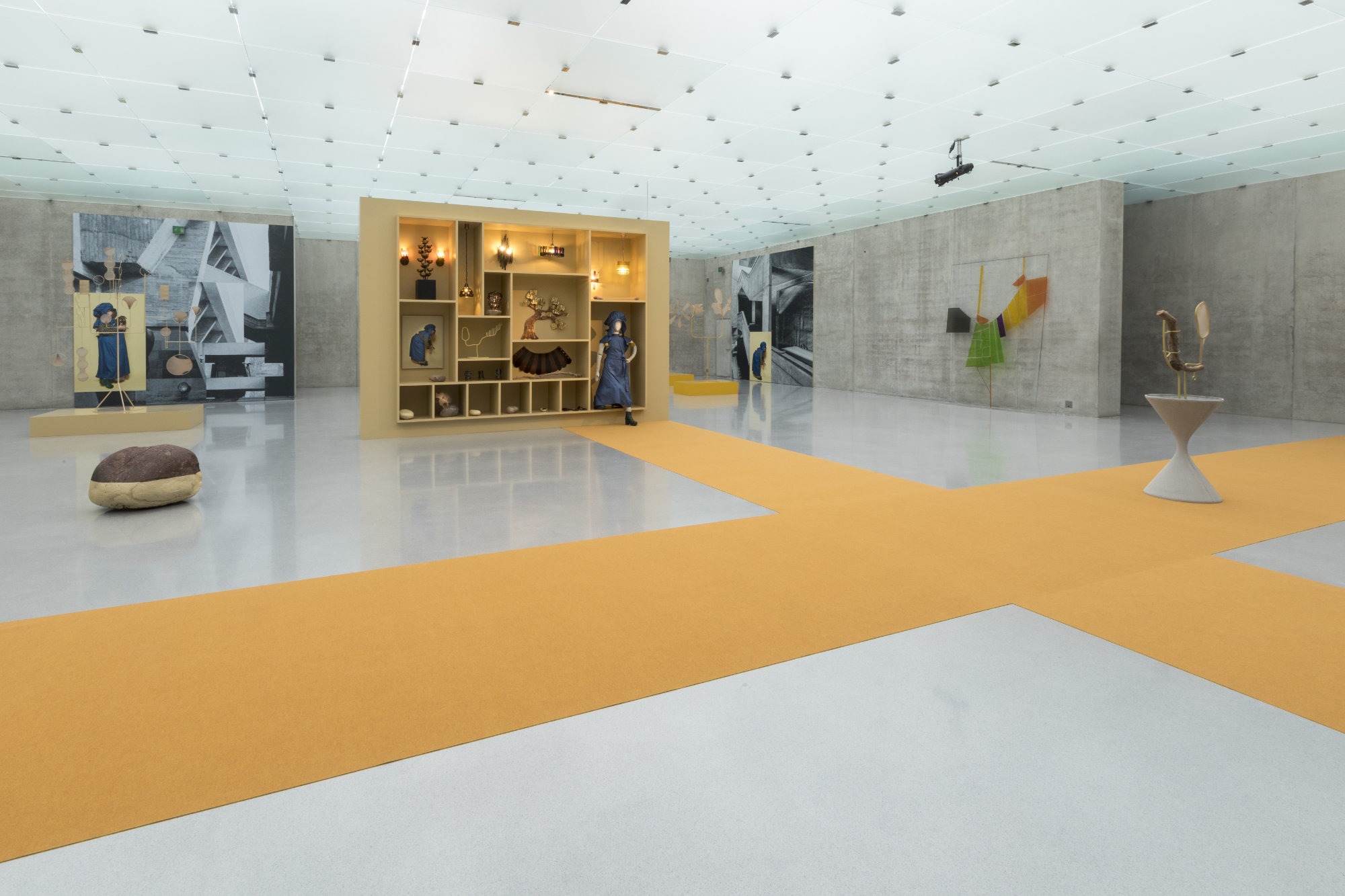 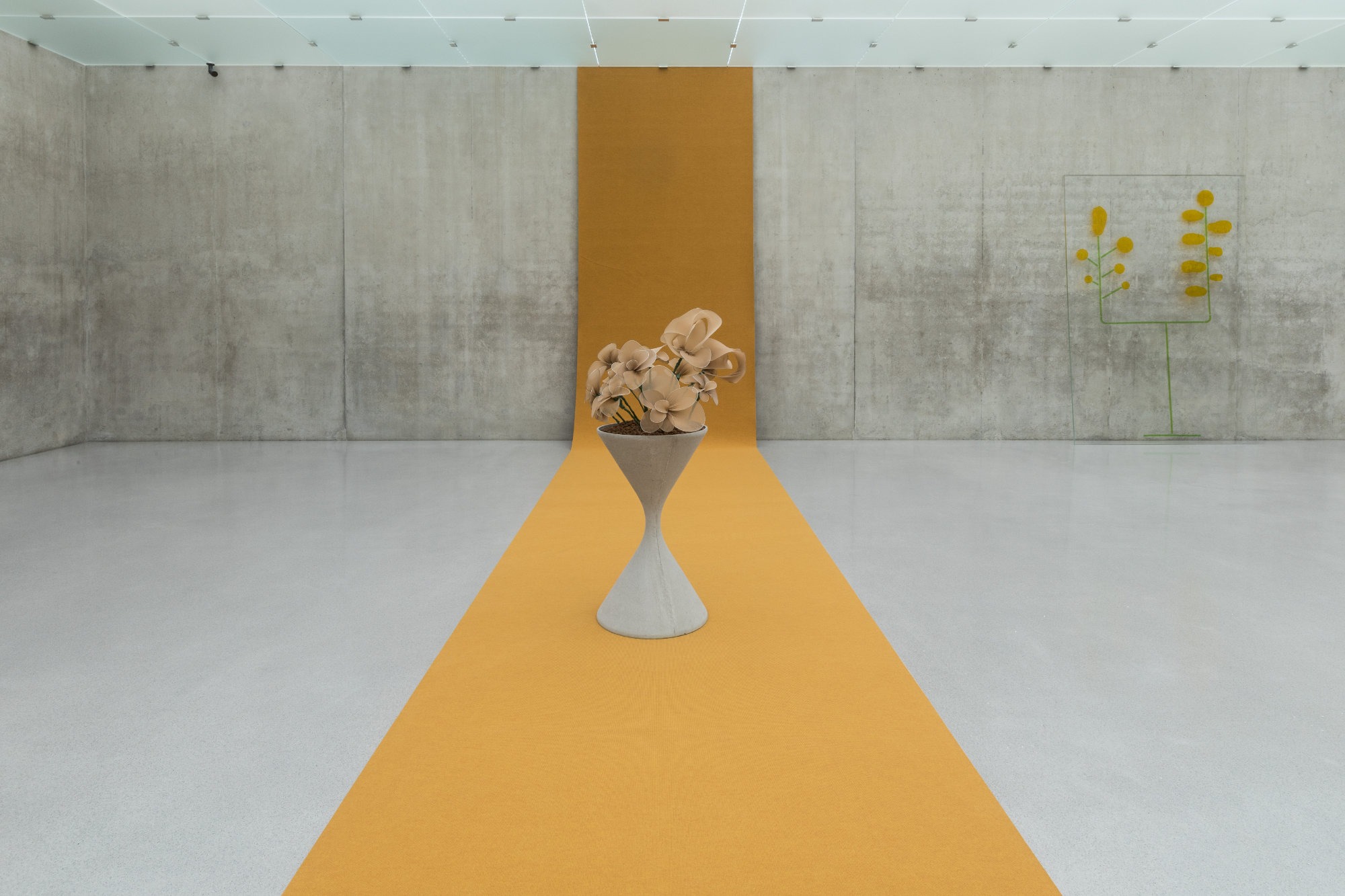 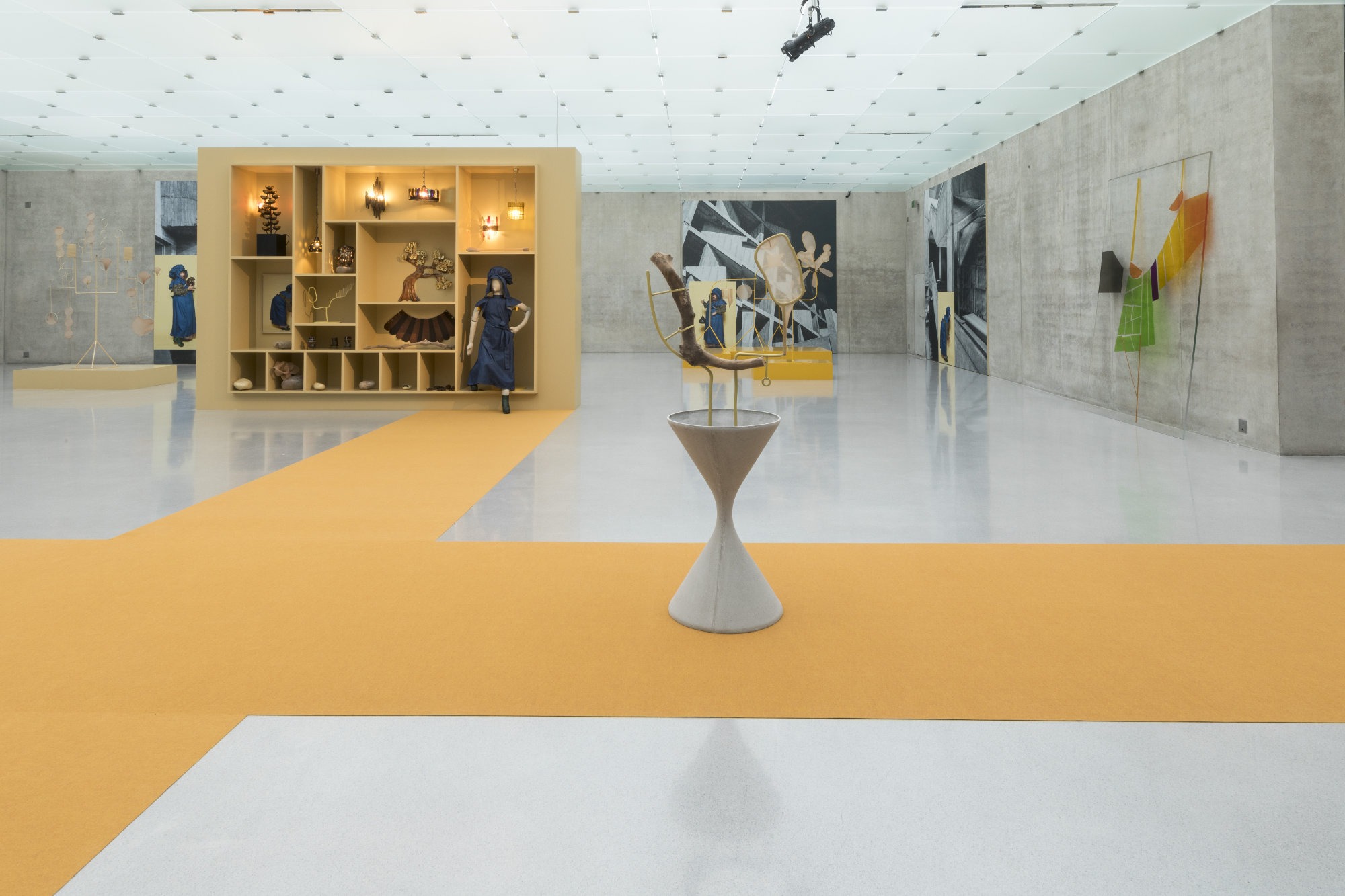 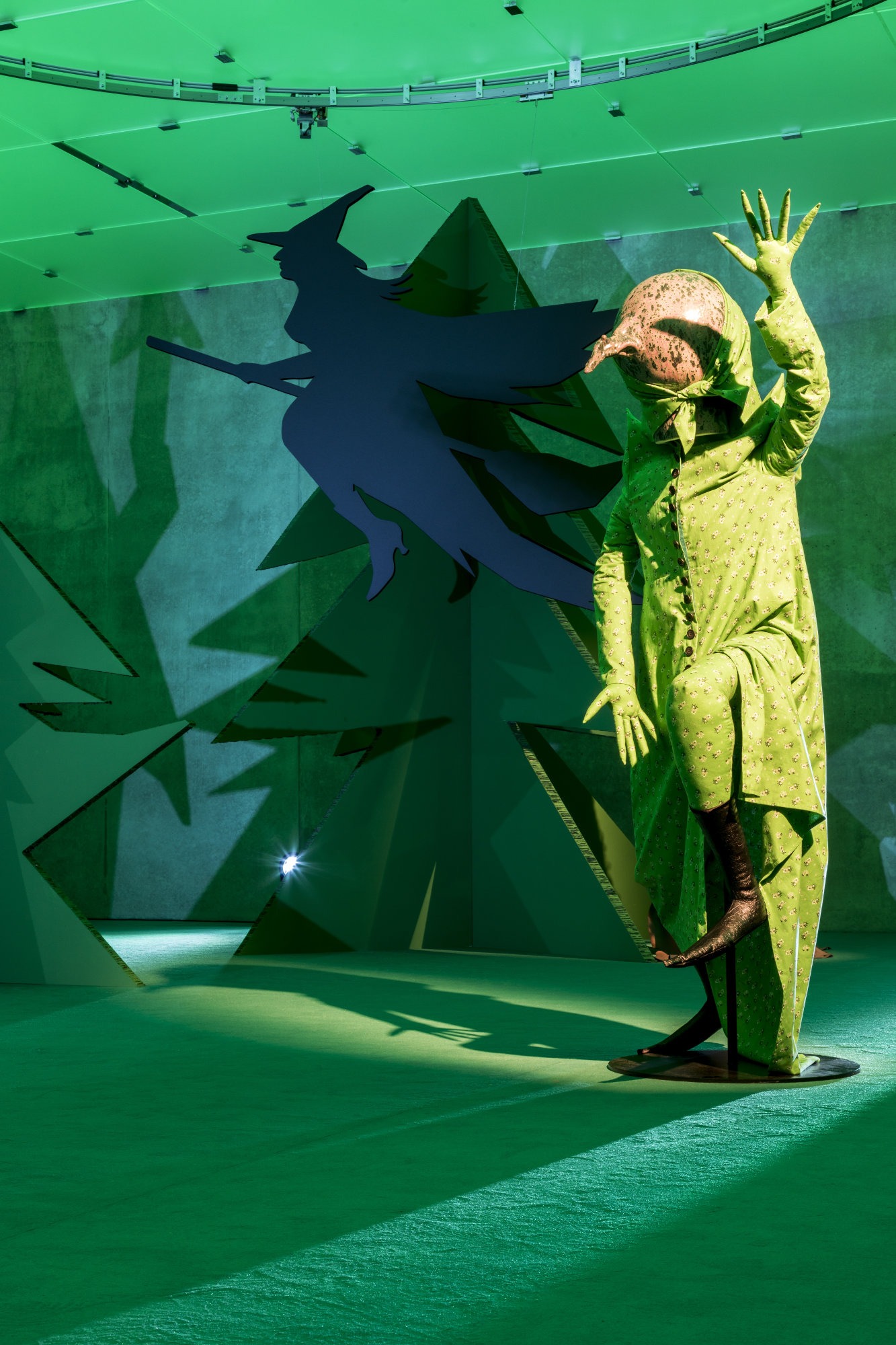 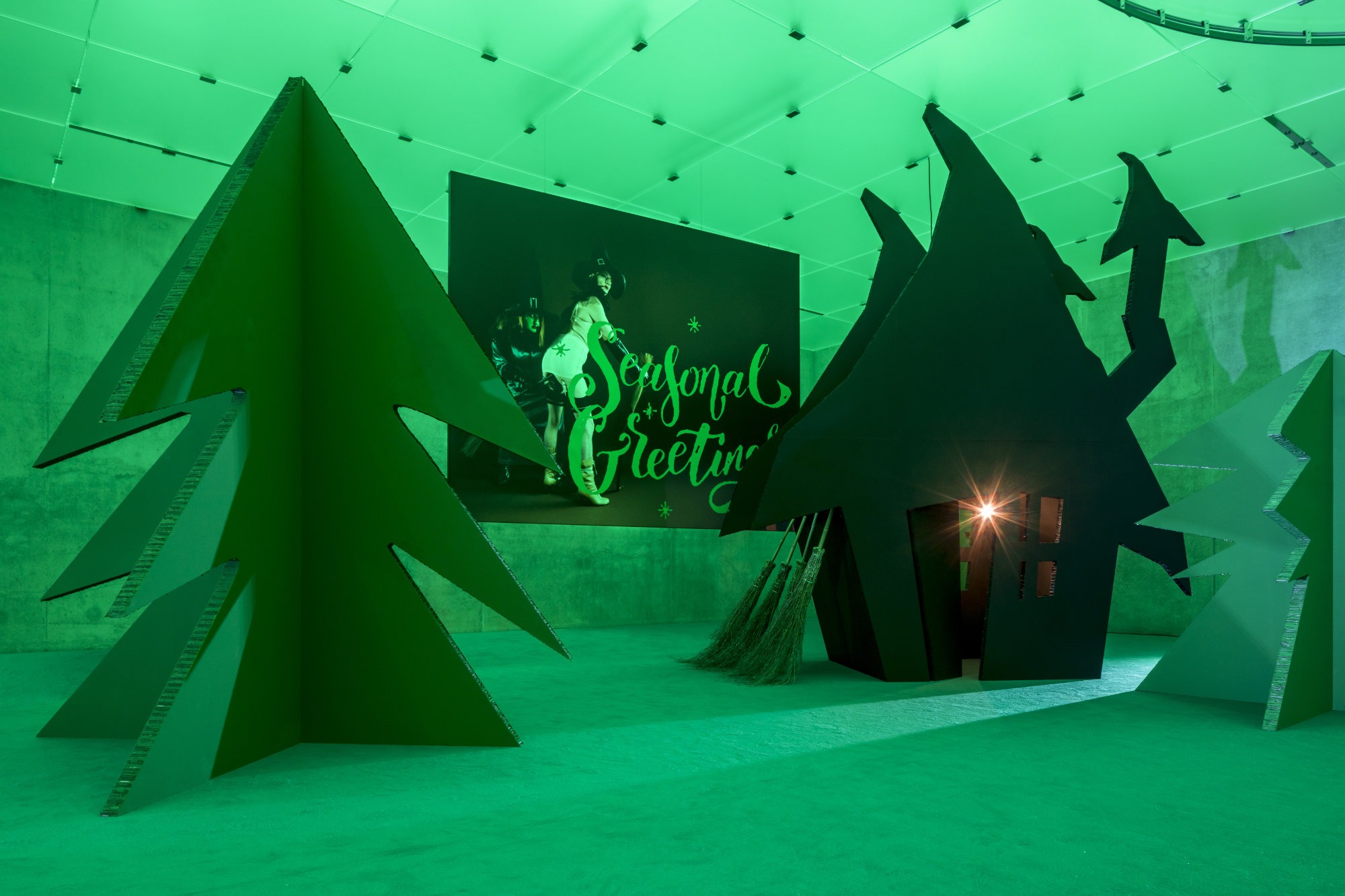 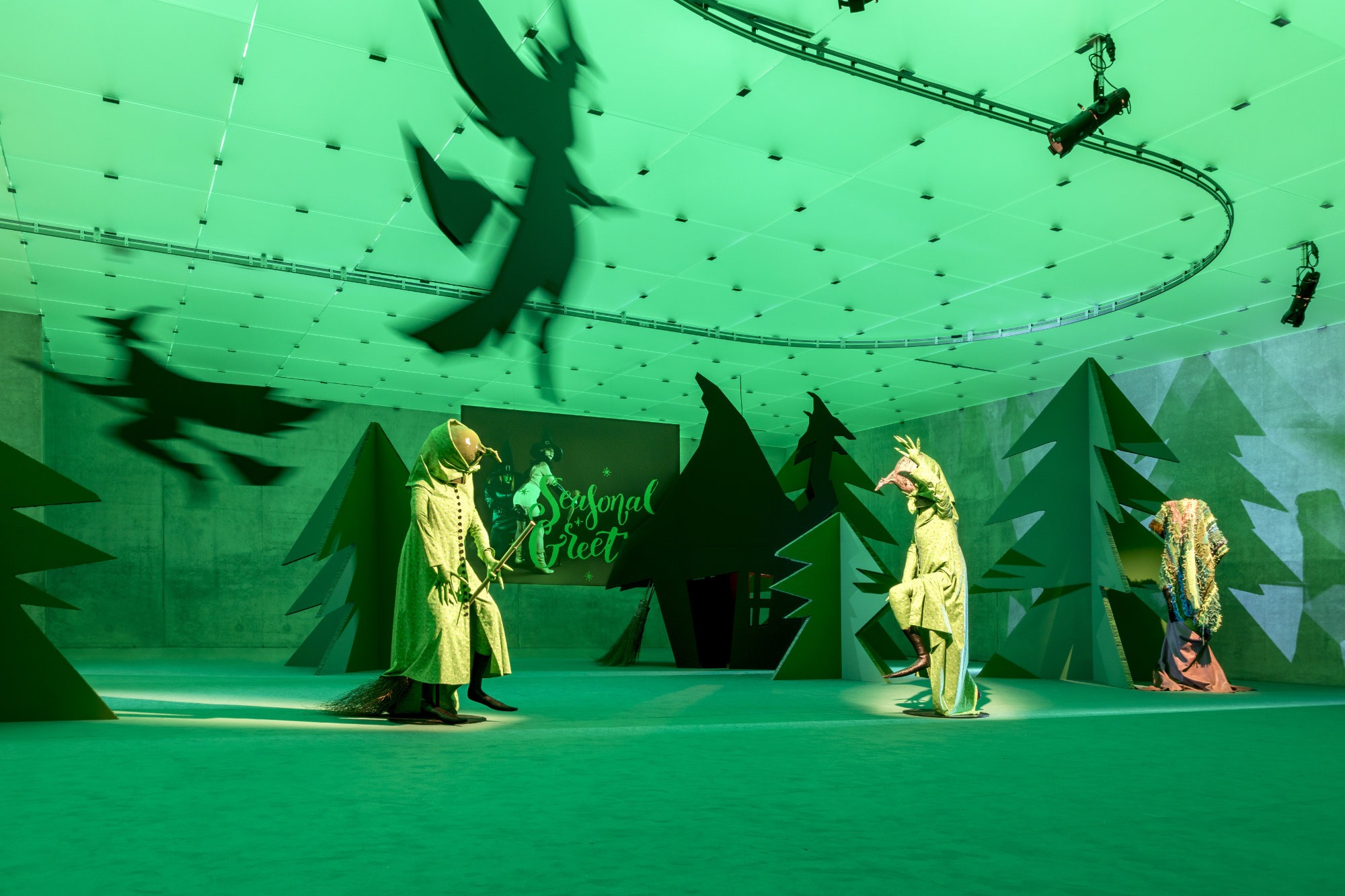 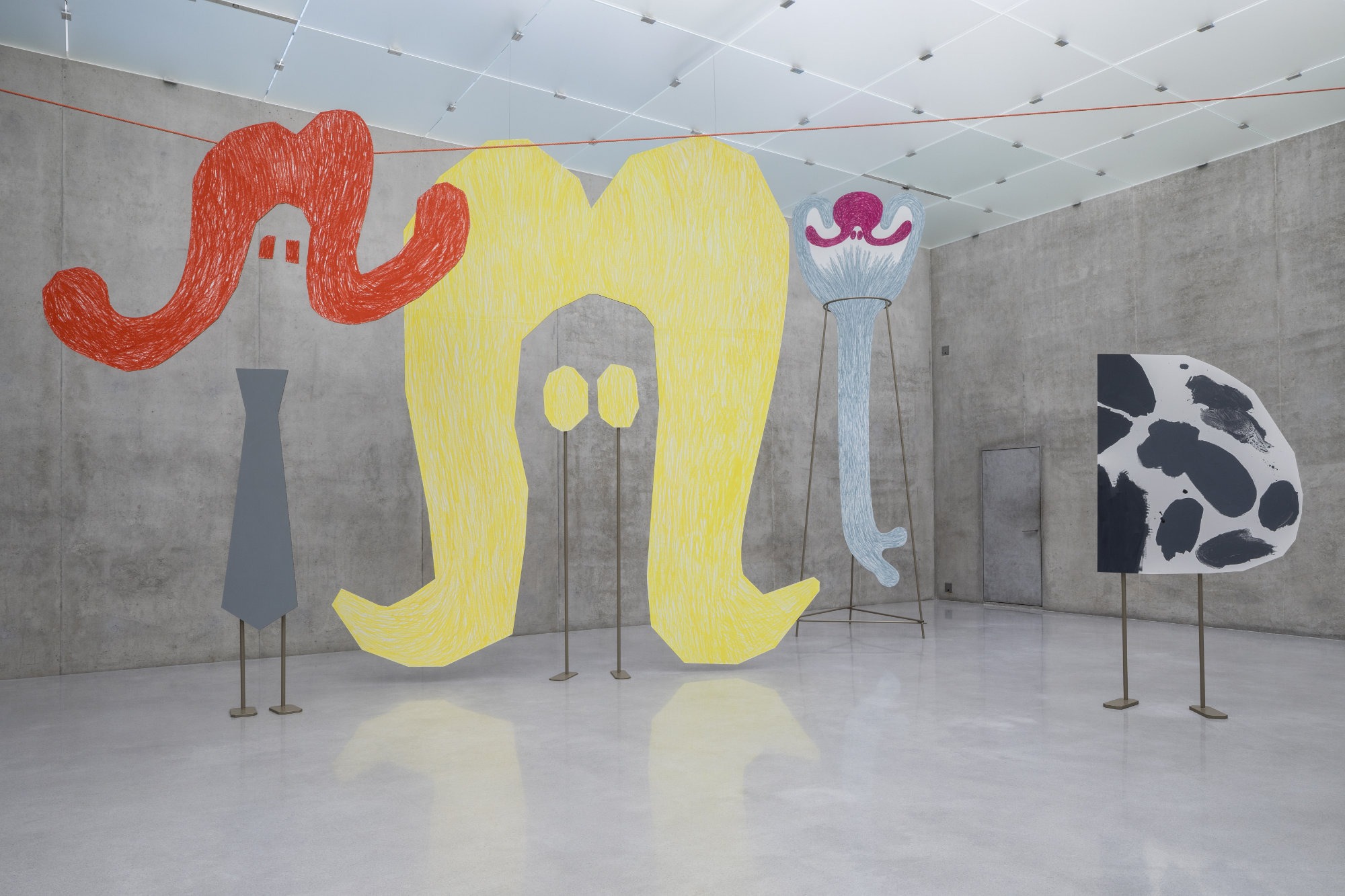 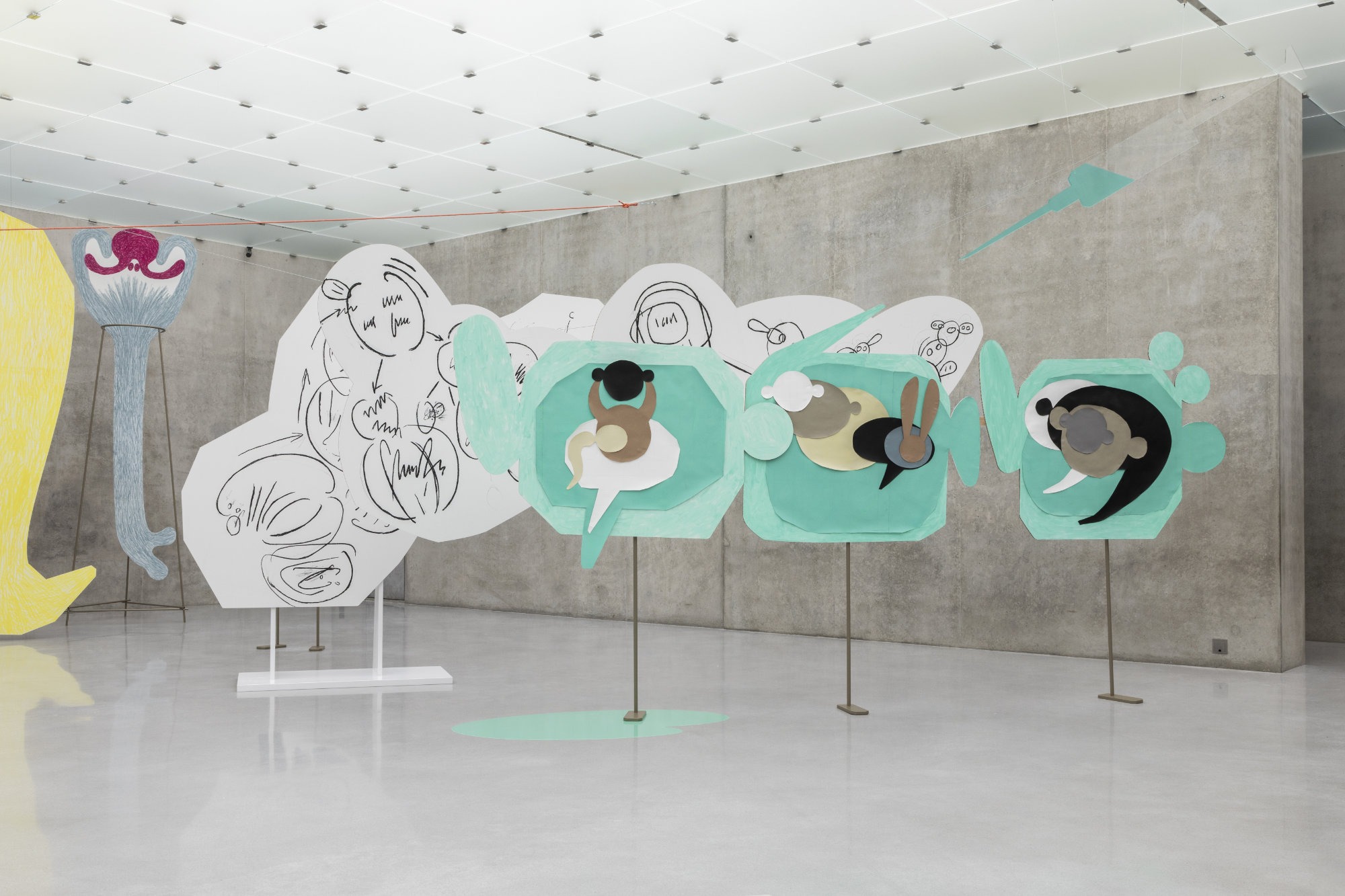 Ashley Hans Scheirl
Exhibition view third floor, Kunsthaus Bregenz, 2020
Das Labor: Operationssaal, 2020
Photo: Markus Tretter
Courtesy of the artist
© Ashley Hans Scheirl, Kunsthaus Bregenz
Pointed witches’ hats with large buckles. A cowering figure in an emerald green satin dress peers furtively out of the dark. In front of her an erect figure in a rose-colored bodice, with garters, black patent leather gloves, and a feather boa. Both hold witches’ brooms, bristles trimmed short, colorcoordinated to match their hair and ankle boots. Their gaze and bright red lips are flirtatious, the figure to the rear pushing a broomstick between the legs of the one in front, furtively and nefariously ... Seasonal Greetings of a different kind. Their appearances are shrill, colorful, and bizarre. Jakob Lena Knebl and Ashley Hans Scheirl, both privately and artistically a couple, play with staging the eccentric. In 2022, Knebl/Scheirl will be responsible for the Austrian pavilion at the Venice Biennale. At Kunsthaus Bregenz, the duo have conceived two floors together, and one each as a solo exhibition.

Restaging important works of art history and sharing them on social media became a popular activity during the lockdown in spring 2020. On the ground floor of KUB, Knebl/Scheirl are presenting one of the most famous works of Romanticism, Das Eismeer by Caspar David Friedrich (1823/24), as a stage that visitors can enter: an icy scene in glacially blue tones, including ice floes, crystalline crevices, and a capsized ship – in their interpretation an upturned sofa, above it ice glass lamps that would have been modern in the 1960s. It is all supplemented by snow and leaflets from the repressive era of Vormärz (the period preceding the 1848 March Revolution in the German Confederation). For a long time the painting by Caspar David Friedrich was wrongly titled Die gescheiterte Hoffnung. For Knebl/Scheirl, this period of history is reminiscent of the social and cultural changes during the lockdown. “Shaken up by an apocalyptic reality, society must invent new utopias,” explain the artists.

The second floor is a dark witches’ sabbath, a scene as if from a fairy tale book: a witch’s house, dark fir trees, and two witches who draw quirky circles above the eerie and comical scenery. Many traits are ascribed to the witch: clumsy companion, evil manipulator in fairy tales, victim of the witch trials, resistive figure of female self-empowerment, and object of a Nazi research project – Heinrich Himmler’s Hexenkartothek. She is a pivot for the appropriation of multiple identities.

Giant flowers of stockings are on display, as are an oversized type case, lamps, and wallpaper depicting brutalist architecture. In Bregenz Jakob Lena Knebl is continuing her “Begehrensräume” (spaces of desire). Knebl searches collections, transforms and combines historical designs and exhibits, permitting them to enter into a dialogue with her own work. Objects and figures, provided with accessories, are assembled and arranged anew. “Thematic clusters” are created in which objects such as dolls are activated, humorously misappropriated as bizarre self-portraits, and enlivened through costumes. Different styles and genres become “co-agents” of our identities. New meanings open up. It is not uncommon for a humorous fetish or an allusion to libidinal appetite to be woven into the iconography.

“When someone has climbed the last of the steep, narrow staircases, an over-long shower curtain initially blocks the view. Is this the entrance to an operating theater? Who is being operated on there? They are oversized drawings, exaggerated linear objects that, cut into shapes, pose on metal legs, becoming co-protagonists in the space,” states Ashley Hans Scheirl. Bodies that have been pulled apart and mouths appear, long legs, reproductive organs, cyborg fantasies, and bloated genitals. Scheirl became known as a filmmaker and performer. Self-image and moving image remain palpable in the “laboratory” at KUB. Painting which had been predominant in Scheirl’s work in recent years is only hinted at. The “parts of the body + self do not merge into a clearly defined continuous whole,” declares Scheirl. “They remain flexible so as to be able to communicate with other parts of the body + self.” It is all about sexual desire and social repression, about erotic visions in the polysexual continuum, about a constantly changing gender, a “bio-tech interface,” and not least about unleashed, beguiling energy: “trans-medium, trans-genre, transgender.”

Jakob Lena Knebl (* 1970 in Baden near Vienna) lives in Vienna working as a Senior Artist at the Academy of Fine Arts. Her most recent solo exhibitions have included ones at Kunstmuseum Lentos in Linz (2020), Belmazc Gallery in London (2019), and Mumok, Vienna (2017). She has participated in international group exhibitions such as the Lyon Biennial (2019) together with Ashley Hans Scheirl. Recently, Knebl has been increasingly producing projects in public spaces.

Ashley Hans Scheirl (born in 1956 in Salzburg) lives and works in Vienna, where he has been professor of contextual painting at the Academy of Fine Arts since 2006. Ashley Hans Scheirl, aka. Angela Scheirl and Hans Angela Scheirl, is a transgender painter as well as a conceptual, mixed-media, performance, body art, and video artist. Scheirl studied at the Academy of Fine Arts in Vienna, and subsequently at Central Saint Martins College of Art and Design in London. In 2017 she participated in documenta 14 in Athens and Kassel with a series of surrealist paintings.

Since 2018 Ashley Hans Scheirl and Jakob Lena Knebl have been developing projects together. In 2019 they sheathed the tower of the Vienna City Hall, and in 2022 they will be staging the Austrian Pavilion at the Venice Biennale.
www.kunsthaus-bregenz.at