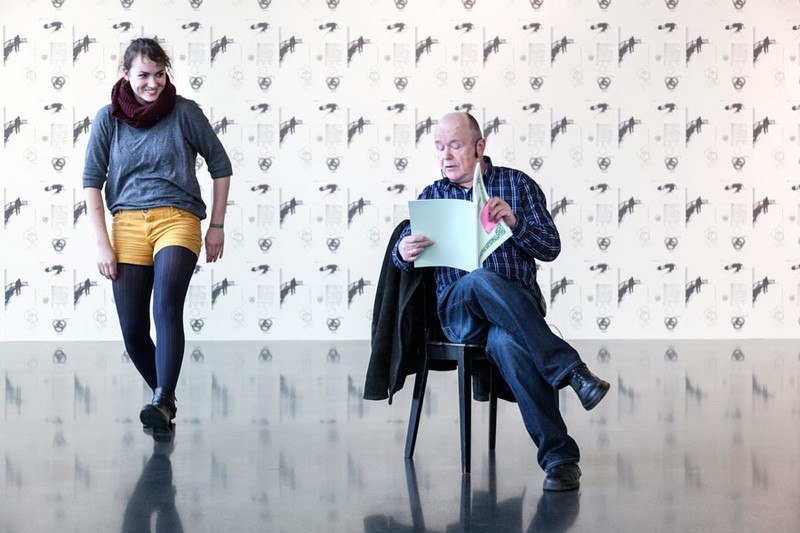 The Spanish artist Dora García’s conceptual works comprise texts, photographs, films, performances, and installations, frequently involving actors from the fields of performance or theater as well as members of the audience. Departing from an interest in challenging the boundaries between reality and representation, improvisation and staging, between artist, work, and audience, Dora García, in a manner reminiscent of a director, designs stories, scenarios, and situations which permit her to experiment, interfere with, and invert expectations. Fiction is deployed as a means of creating alternative models of reality, questioning and undermining the rules of the art world and the role that each of us takes within it. The results are ongoing processes of performative, site-specific ensembles which open up the exhibition space beyond merely static gestures.

In the past Dora García has taken part in numerous important exhibitions of contemporary art, for example in 2011 at the 54th Venice Biennale, where she developed a project for the Spanish Pavilion, and in 2012 at dOCUMENTA (13) in Kassel. Her most recent high-profile project is The Joycean Society (2013), a film project in which she accompanied a James Joyce reading group based in Zurich over a time period of one year, whilst they developed ways of interpreting and translating Finnegans Wake.

An aspect which is crucial in differing ways to all of García’s works, is an explicit interest in language, as a possibility for creating communities, as an access code to secret societies, as a space for action and therefore as translator and constructor of reality, as well as language as the structure of the unconscious, as poetry. For her exhibition The Sinthome Score, which she has developed especially for KUB Arena, García continues her artistic involvement with language and questions of representation and translation and incorporating the collaboration of the local population.

For the duration of the exhibition, KUB Arena will be opening an additional entrance at the side of the Kunsthaus facing the lake, a backdoor bearing the inscription »Sinthome.« The term originates from a text of the same name by the French psychoanalyst Jacques Lacan, Seminar XXIII – Le Sinthome (1975-1976), which provides the point of departure for Dora García’s work. An involvement with James Joyce, especially Finnegans Wake, caused Lacan to reconsider his model of the Borromean rings (three rings which are joined in such a way that they would fall apart if just one were removed), as it was apparently insufficient in explaining the symptoms of Joyce. Lacan decided consequently to expand this basic triad of the imaginary, the symbolic, and the real, which according to him defined subjects, by the addition of a fourth element, the Sinthom (the old French spelling of symptom). This concerned the area formed at the center of the three rings, creating quasi the core of the subject that binds the knot of the three rings. The converted backdoor of KUB offers an alternative way of entering the institution, to approach this area made spatial, from the rear whilst simultaneously encountering objects and people.

Using the German translation of the original text by Max Kleiner (2007), which was instigated by the Lacan Archive located in Bregenz, as a basis, Dora García has constructed a score, which will be performed by two continually changing performers from the region: once with the voice in the form of a reading, and once with the body performing a sequence of movements.
The ground floor of the Kunsthaus will provide a stage for numerous and varying interpretations of García’s score, in which the public, either as performer or observer, can participate.

The exhibition will be accompanied by a program of events that has been developed in close cooperation with the Lacan Archive, Bregenz.
www.kunsthaus-bregenz.at