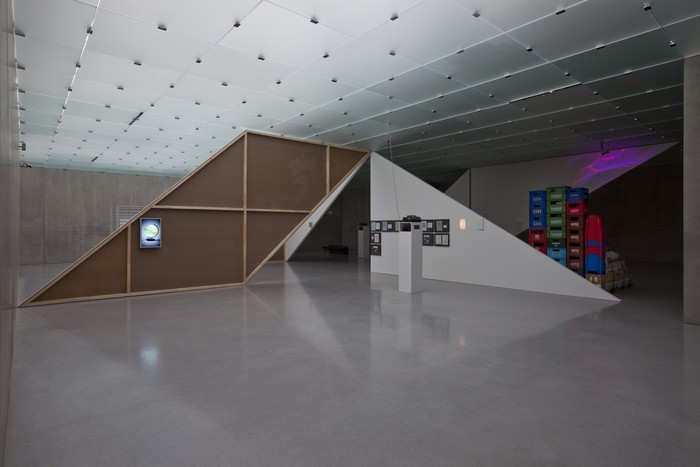 The artist Haegue Yang, born in 1971 in Seoul, surprised visitors to the 53rd Venice Biennale at two separate exhibition locations. As par t of the large-scale thematic group show »Fare Mondi« in the Arsenale she presented seven sculptures from her work Series of Vulnerable Arrangements – Domestics of Community, consisting of metal stands, from which electric cables in differing diameters and colors along with various kinds of objects and light bulbs opulently cascaded.

At the same time Haegue Yang had, after long consideration, accepted the invitation to represent her home country at the Biennale in the Korean Pavilion in the Giardini. Following Venice, the artist not only participated in many important group exhibitions, but in 2010 also had major solo exhibitions in New York and in Seoul. With »Arrivals«, the exhibition she has conceived for Kunsthaus Bregenz, Haegue Yang is taking yet another important step forward. She is not only presenting a selection of her most important work to date in new installations within an architecture especially conceived for it, but has also created 33 new light sculptures, which enigmatically populate the third floor like alien life-forms. Furthermore, she has developed her largest installation to date for the Bregenz show, consisting of approximately 200 aluminum venetian blinds, which occupy KUB’s entire second floor with an impressive weightlessness.

The complex installations, sculptures, objects, photographs, videos, and slide projections, which in their atmospheric intensity appear equally poetic and conceptual, negate any unequivocal interpretation. Even if issues such as cultural background and references to other social and political questions are repeatedly noticeable, Haegue Yang’s work captivates precisely because of its ambiguity, which is rooted as much in the conceptual art of the 1960s and 1970s, as in an engagement with current theoretical discourses. This is already clearly demonstrated in the extensive presentation of older works on the first floor of KUB.

Here the artist has divided the open-plan space into numerous smaller compartments with wooden constructions, and makes use of solely the triangular, i.e. trapezoid wooden walls to hang her works on, which appear fragile in comparison to the building’s solid concrete walls. Additionally, the slightly darkened space, the various soundtracks accompanying the videos being shown, and the clacking sound of the slide projectors generate an almost meditative atmosphere and at the same time underline the conceptual impetus of the work.

The rigorously conceptual approach is continued in the installation Storage Piece from 2004 which is also on display in Bregenz, for which the artist wrapped up all her works to date, but which still lacked storage space and were therefore threatened by the prospect of disposal. She presented the wrapped works on transport pallets and declared the resulting store to be an artwork, which subsequently was sold to a collector as a single piece of work.

The structure of the newly created aluminum venetian blinds work which defines a large rectangle located diagonally within the space and partly derives from the grid of KUB’s glass ceiling, is accented by five high piles of a tower-like construction. The aluminum venetian blinds, primarily painted in silver but with a very few in gradients of color, combine with eight movable spotlights mounted to the walls as well as scent machines to cause a strong visual and sublimely olfactory effect

Haegue Yang has arranged her new light sculptures, which are similar to those already shown in Venice, on the third floor of KUB in the form of small groups, as pairs or individually. In contrast to comparable earlier works, her new works developed especially for Bregenz distinguish themselves by an expressive strength of almost baroque opulence. This is because in addition to the variously colored light bulbs and other elements from lamps she employs ar tificial plants, wigs, and everyday objects – that is seemingly organic and artificial devices – with an intensity that has so far been unusual for her. In doing so she fabricates objects that alternate in character between creatures originating from remote galaxies, primitive people and hippy-like apparitions. The impression of animated arrangements of cult objects is additionally enhanced by a background soundtrack: in the mornings, at midday and in the evenings the space is filled by Igor Strawinski’s ballet music Le Sacre du Printemps, a composition revolutionary for its time. Strawinski’s almost religious, primitive, and challengingly avant-garde drama seems to resonate within the exhibition’s title »Arrivals«, which selfcritically and humorously qualifies the energetic, optimistic gesture of such an impressive show.