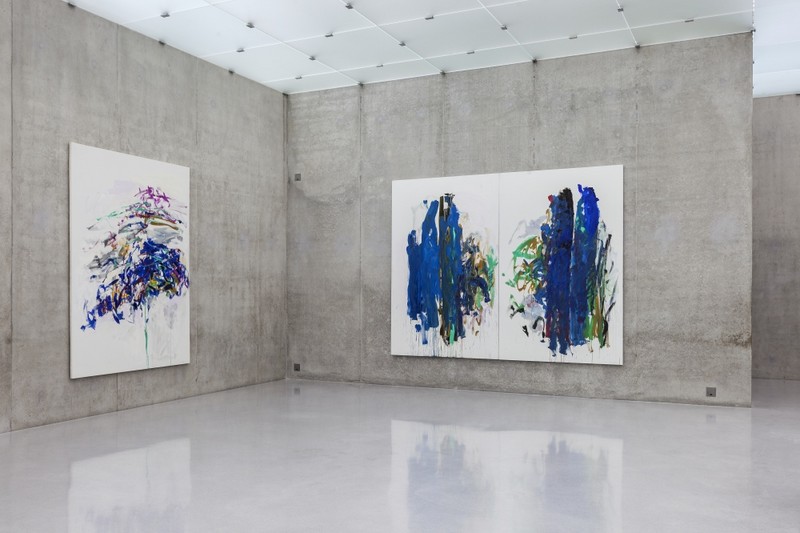 Together with the Museum Ludwig in Cologne and in cooperation with the Joan Mitchell Foundation in New York, Kunsthaus Bregenz is presenting a large-scale survey exhibition of the legendary artist Joan Mitchell (1925–1992). The show’s focus is on painting, ranging from the early work of the 1950s to her last years, presenting nearly thirty paintings by one of 20th century art’s most significant protagonists.

A large part of the exhibition is dedicated to the first extensive public presentation of archival materials, providing an extraordinary insight into the artist’s fascinating life. Film, photographs, and other ephemera shed light on Joan Mitchell’s personality and her relationship to such cultural figures as Elaine de Kooning, Jean-Paul Riopelle, Frank O’Hara, and Samuel Beckett. Vorarlberg architect Bernardo Bader has developed a display for these archival materials, enabling them to enter into a compelling dialogue with the artist’s works.

In 1959 Joan Mitchell participated in documenta II, and her work is in the collections of important museums in the USA and France. In recent years a younger generation of artists has rediscovered her work. This renewed dialogue has been largely due to her emancipated attitudes and the unique position her painting enjoys, located between the USA and Europe. Born in Chicago in 1925, she traveled a lot as a young woman, splitting her time between New York and Paris. Around 1959 she began living in Paris full time, in 1968 moving to Vétheuil, a commune in the northwestern suburbs of Paris. As a child, Mitchell was already drawn to European art. She and her father visited the Art Institute of Chicago, where Mitchell’s favorite works were by Van Gogh, Manet, and other 19th and 20th century French painters. Her early work still displayed an affiliation to the New York School, but her gestural application of paint changed by the end of the 1950s on moving to France when Joan Mitchell began citing such painters as Vincent van Gogh as role models. Even if differing associations, ranging from the light of changing seasons to trees and other plants, emerge in her images, they still confidently assert themselves as purely abstract painting. Such oscillations between the figural, the referential, and the abstract constitute the appeal of Joan Mitchell’s work that reaches far beyond just younger artists.

The exhibition gathers together works from the Museum of Modern Art in New York, Centre Pompidou in Paris, the Joan Mitchell Foundation, and from private collections, some of which have rarely or never been publicly shown before.

Joan Mitchell was born in Chicago in 1925. After graduating from the School of the Art Institute of Chicago in 1947, she was awarded a James Nelson Raymond Foreign Traveling Fellowship, which took her to France for a year in 1948-49, and it was there that her paintings moved toward abstraction. Returning to New York, she participated in the famous 9th Street Show in 1951, and soon established a reputation as one of the leading younger American Abstract Expressionist painters. She exhibited regularly in New York throughout the next four decades and maintained close friendships with many New York School painters and poets.

In 1955 she began dividing her time between New York and France, and in 1968 she settled in Vétheuil, a small town in the countryside outside of Paris, where she worked continuously until her death in 1992. During the almost 50 years of her life as a painter, Mitchell’s commitment to the tenets of gestural abstraction remained firm and uncompromising.

Mitchell gave personal support to many young artists who came to stay with her at Vétheuil— sometimes for just one night; sometimes for an entire summer. Correspondence in her papers reveals that this generosity often had a lifechanging impact on those that spent time with her. Her generosity in her own lifetime continued after her death with the formation of the Joan Mitchell Foundation, called for in her will in order to create support and recognition for individual artists. In addition, the Foundation mission includes the promotion and preservation of her legacy, which includes her remarkable body of work, her papers, including correspondence and photographs, and other archival materials related to her life and work.
www.kunsthaus-bregenz.at