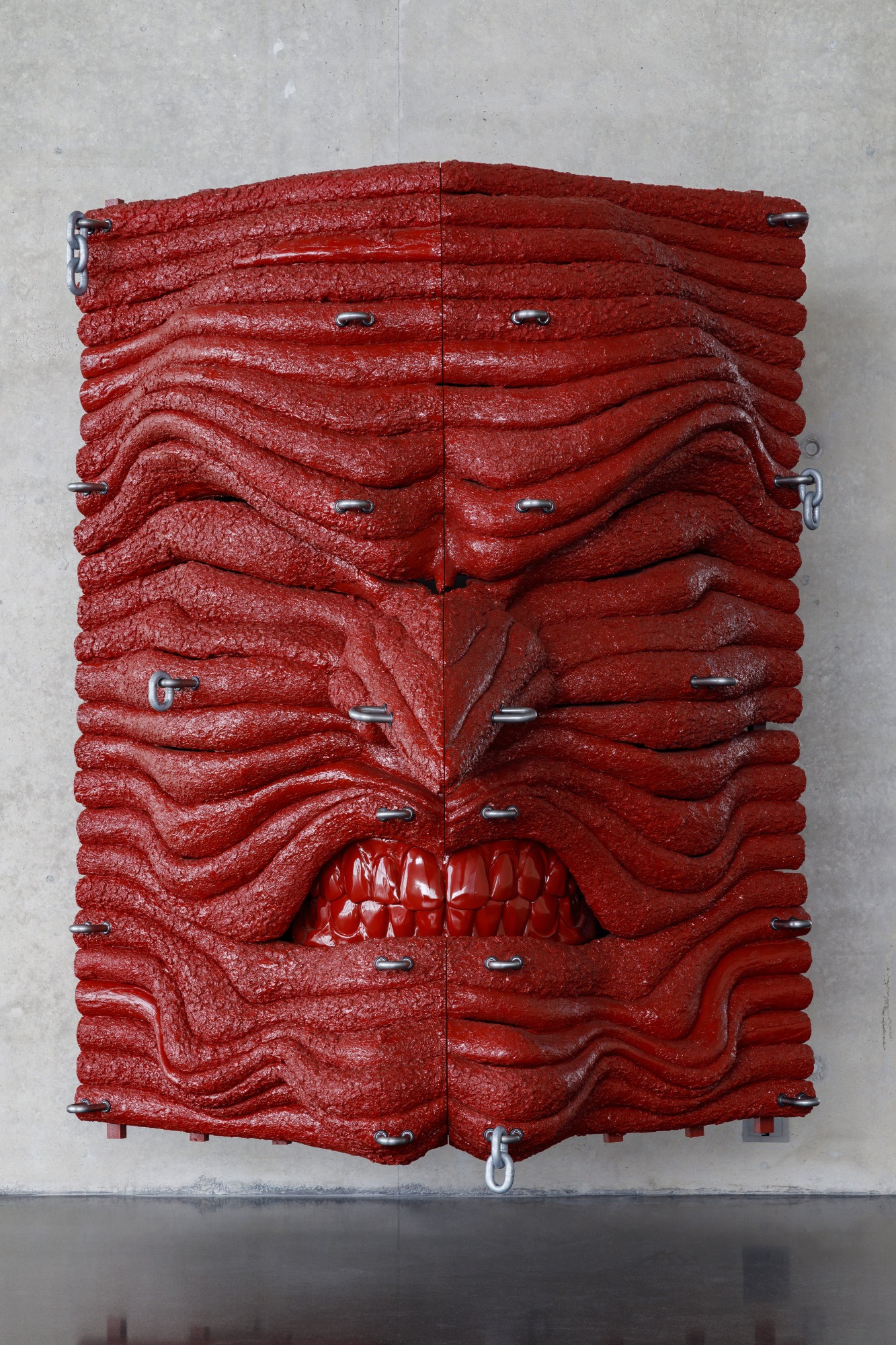 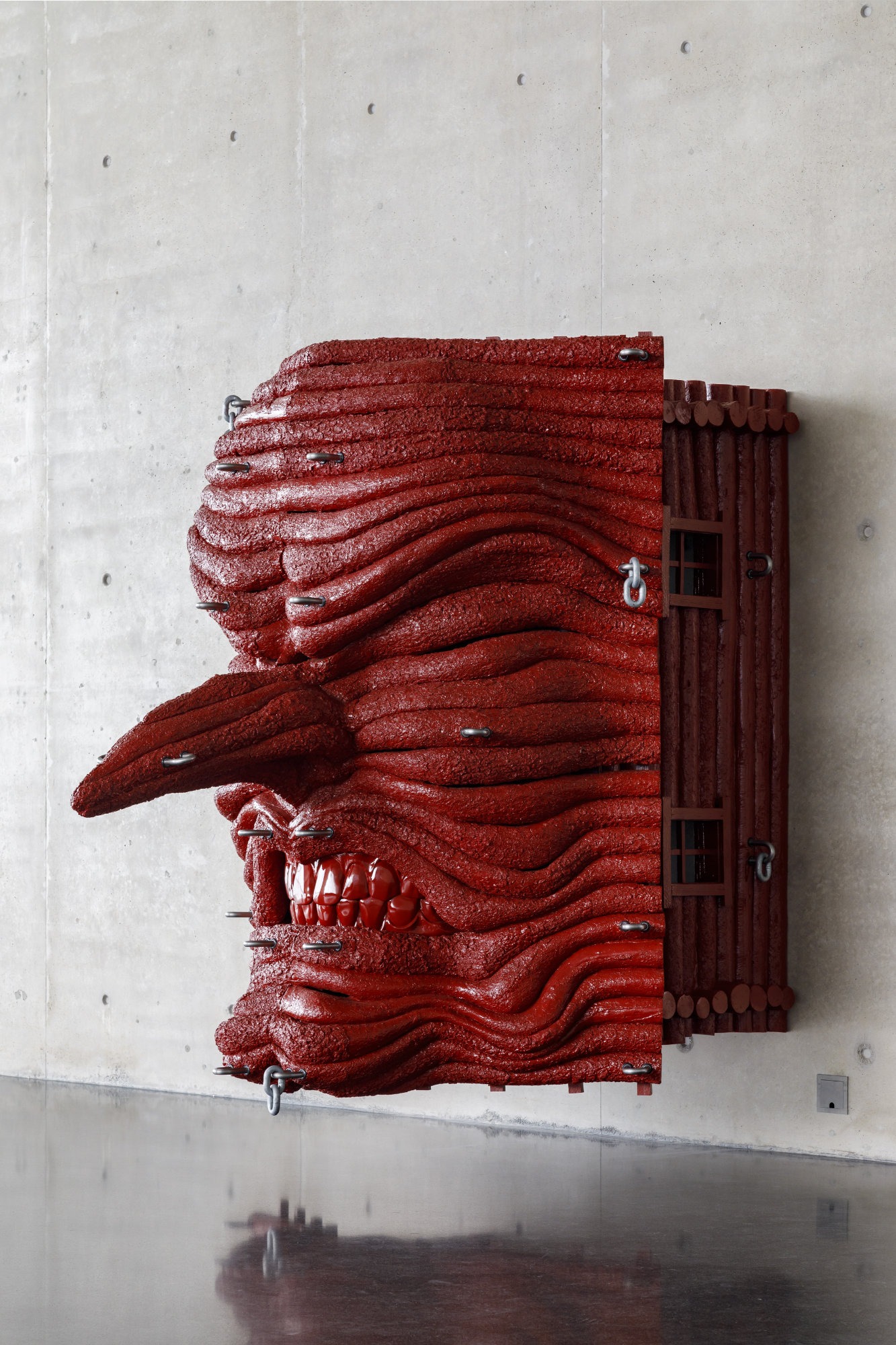 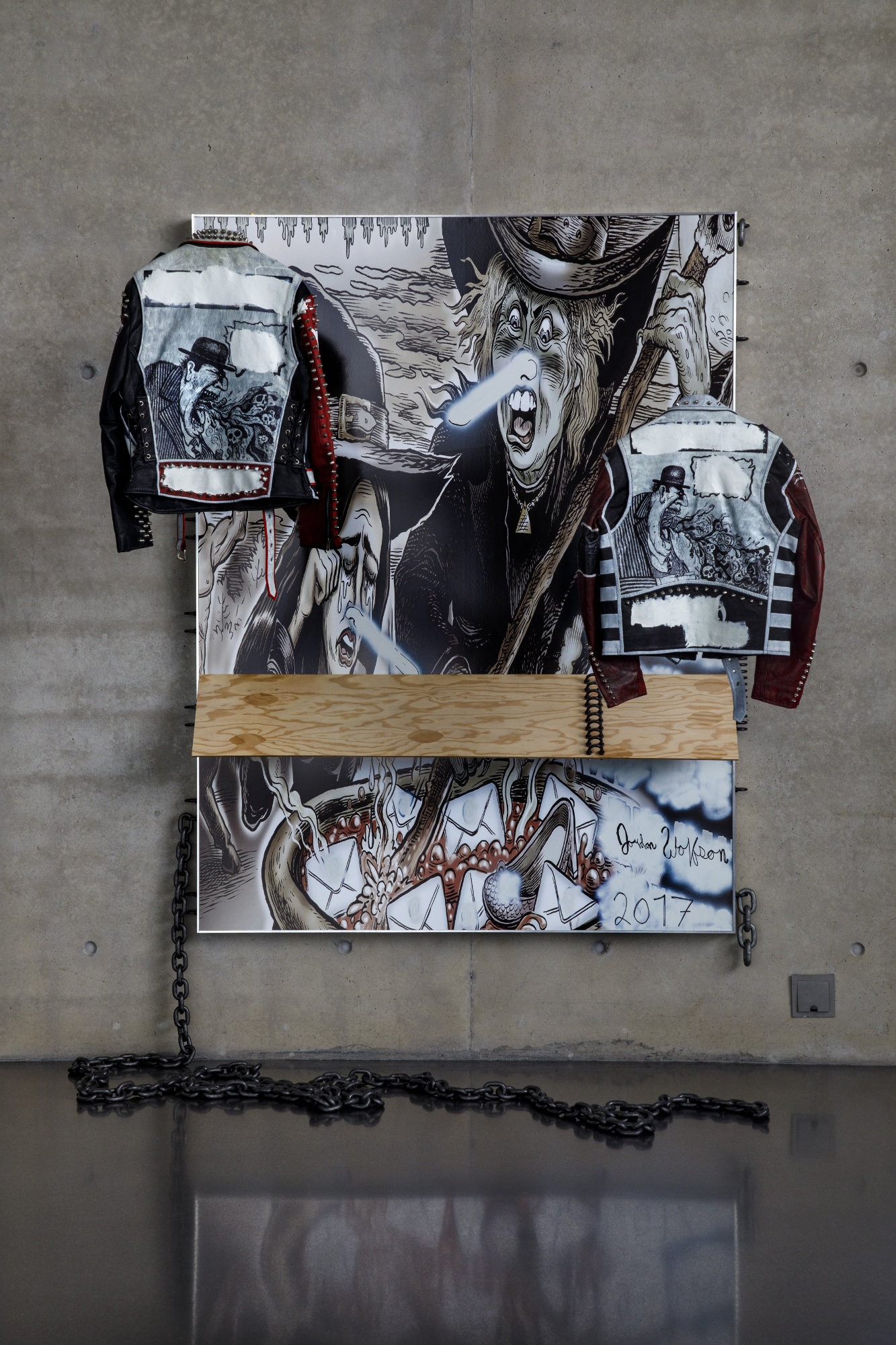 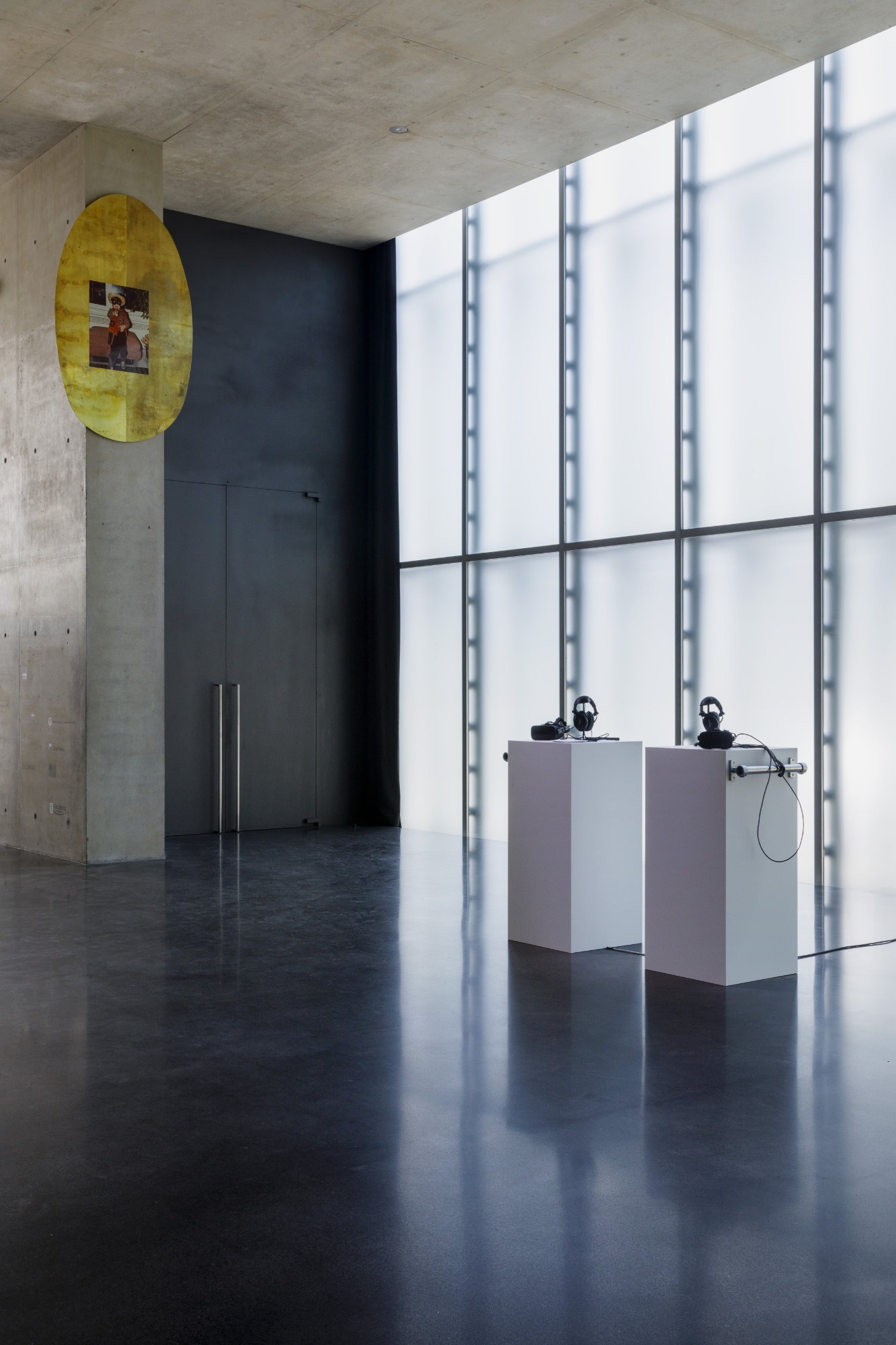 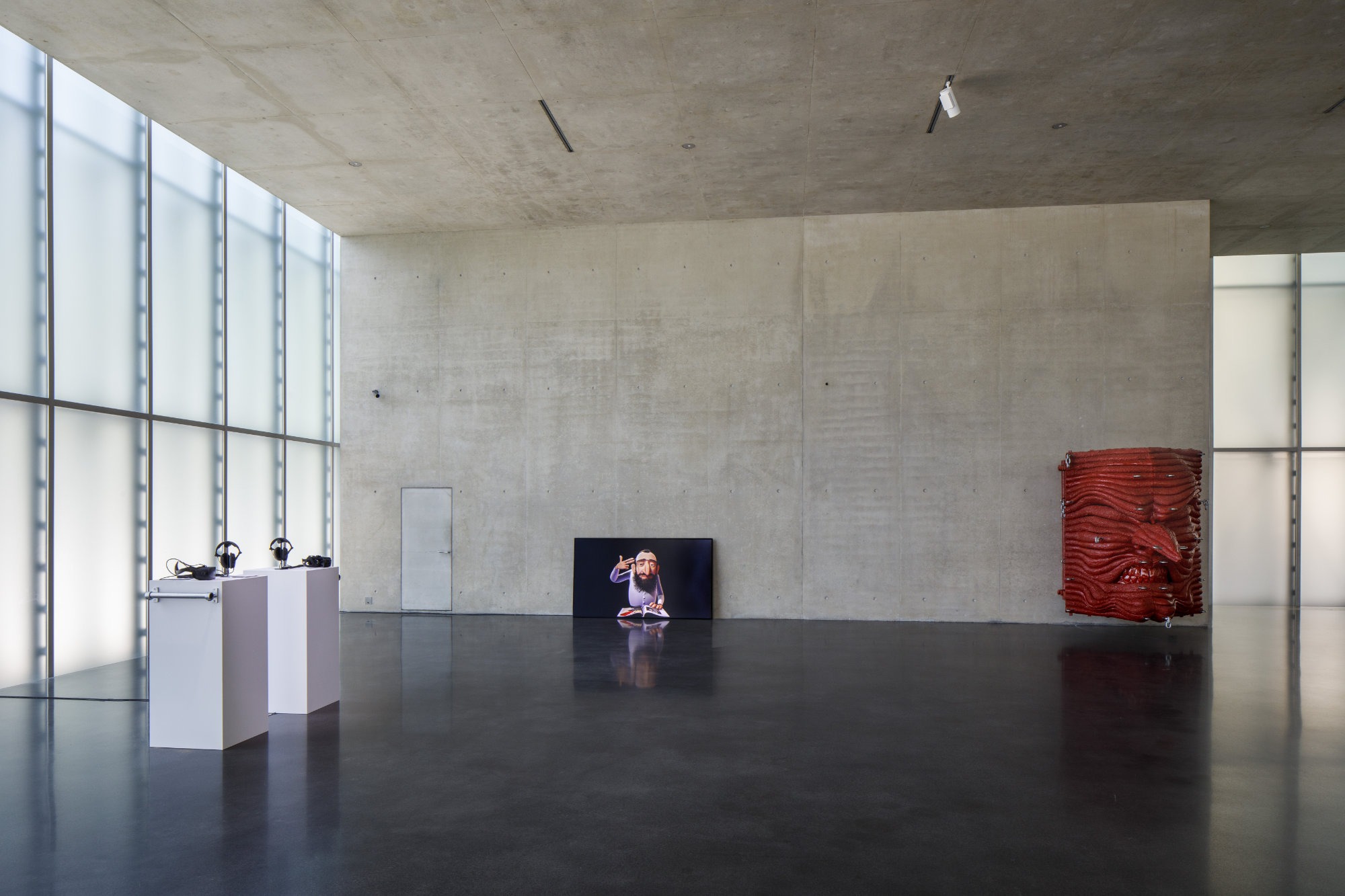 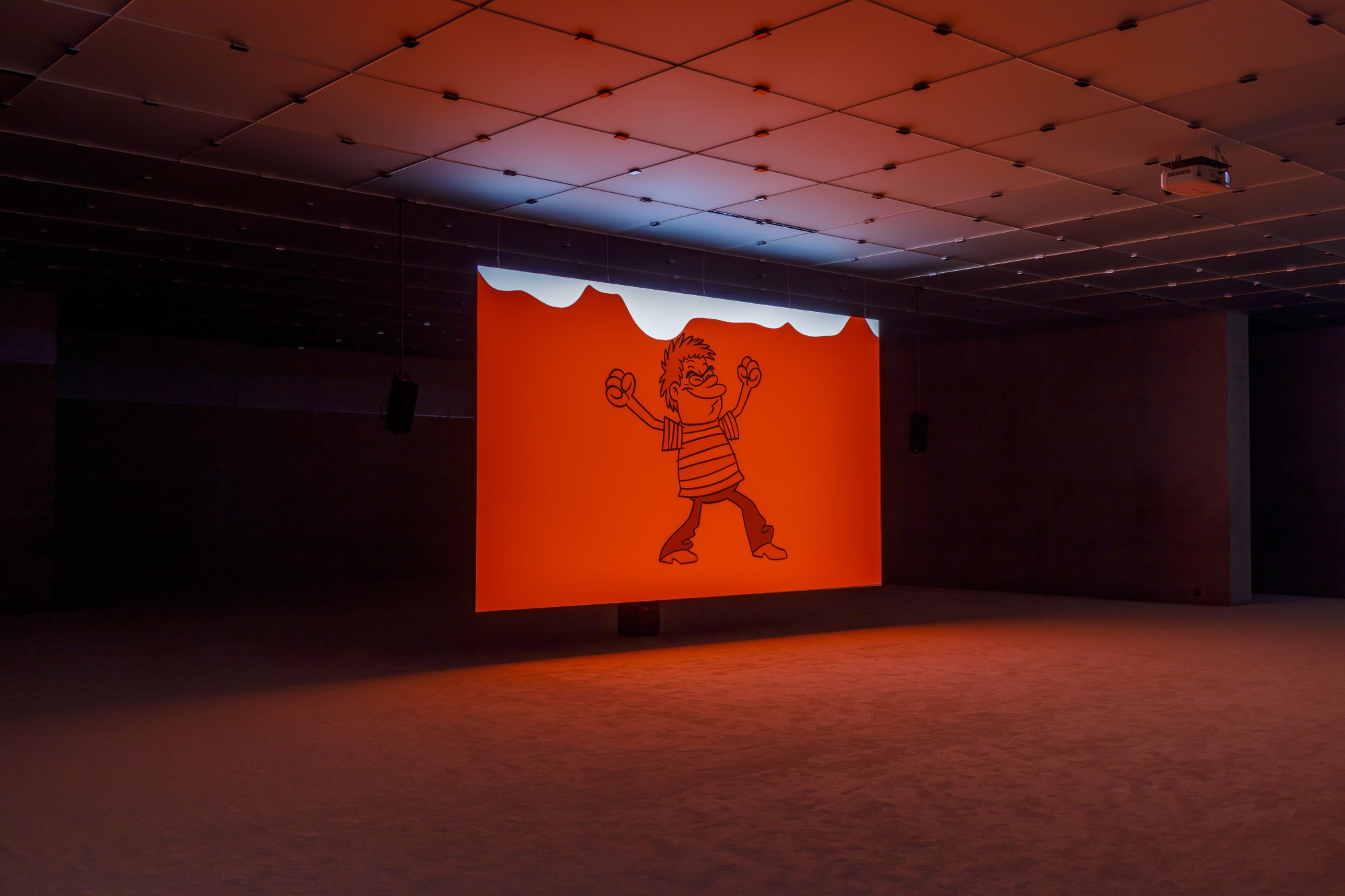 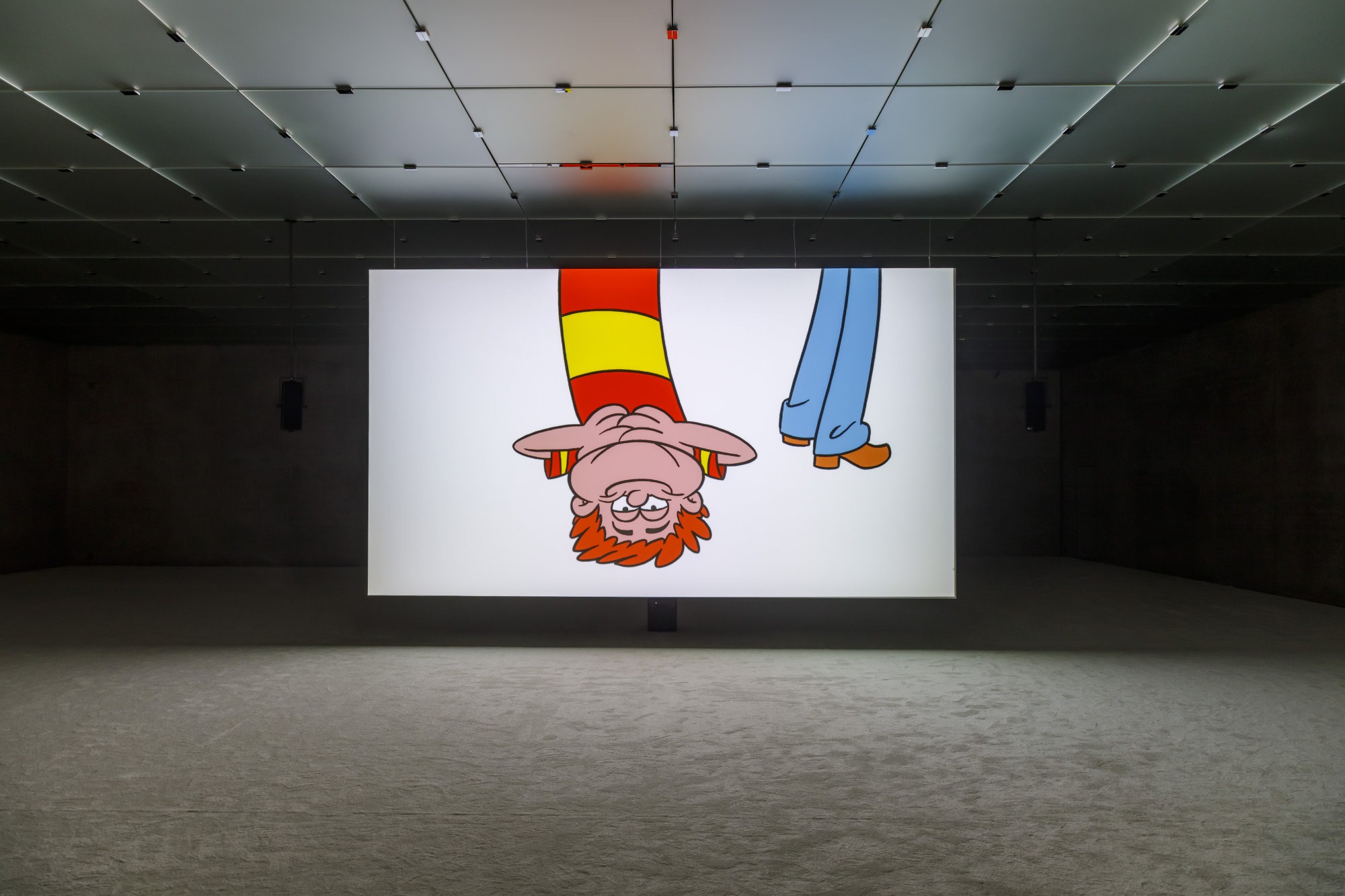 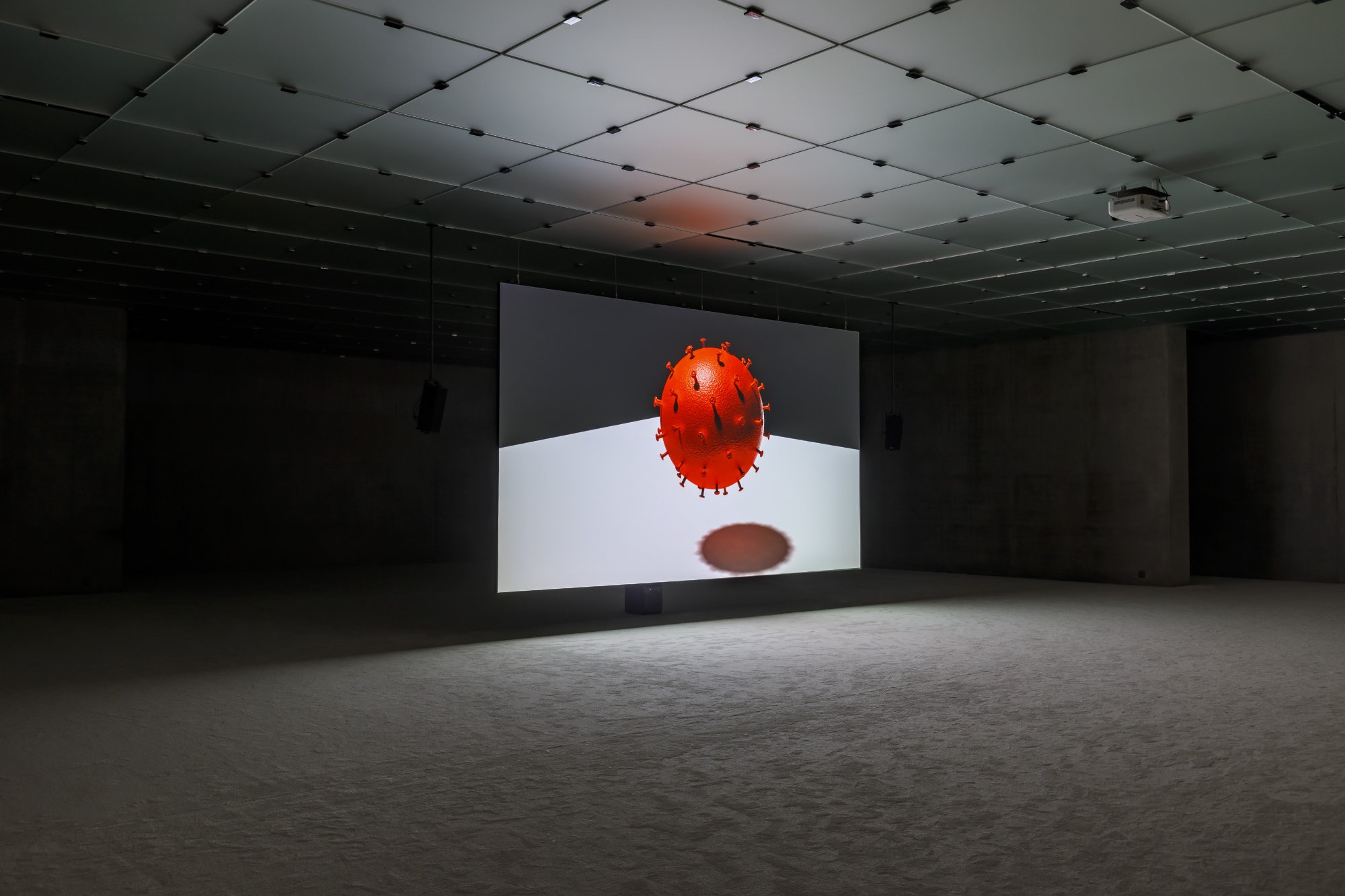 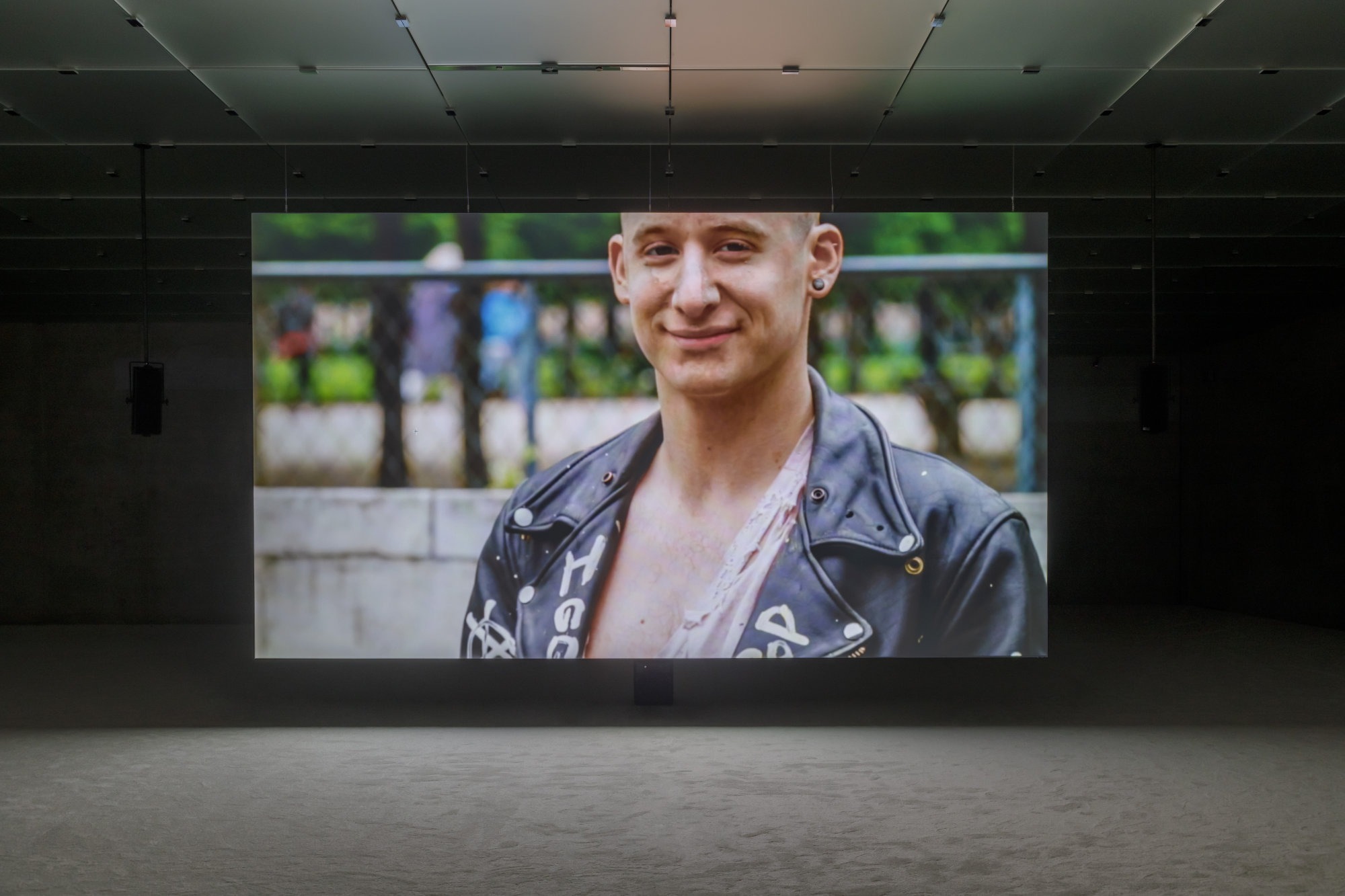 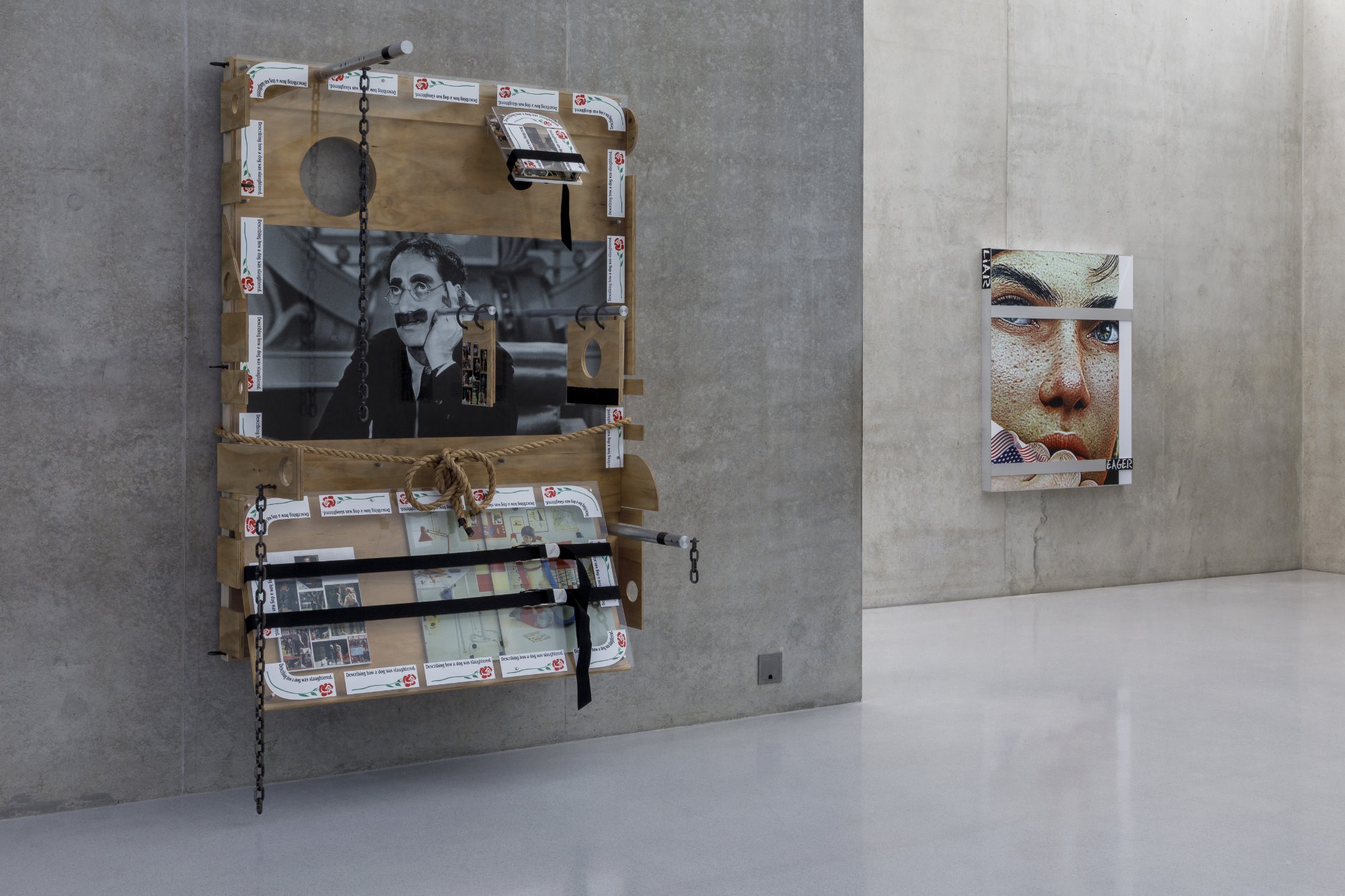 Jordan Wolfson
Installation view, second floor Kunsthaus Bregenz, 2022
Photo: Markus Tretter
Courtesy the artist, Collection of J&M Donnelly and Larry Gagosian
© Jordan Wolfson, Kunsthaus Bregenz
Jordan Wolfson is known for powerful and unsettling works in a range of media and formats that interrogate the conditions of art, technology, and mass media in contemporary life. Wolfson commandeers his motifs from the gaming industry, internet clips, comic strips, and facial recognition software. His works are anything but accommodating, his questions discomforting. How are imagery and information processed? How do technologies infiltrate our thoughts and perceptions? What is our approach to such issues as sexism, racism, and homophobia? What are our fears doing to us?

In one of his works visitors find themselves in a virtual world, where skyscrapers soar beside them, as cars and yellow taxis pass along one of New York's grand avenues. Street noise reverberates; it is everyday life in the big city. The 3D video is compelling alone in its uncanny proximity to reality. But a monstrous act begins to quickly unfold in the immediate vicinity, a man is beating another to death with a baseball bat. The viewers become witnesses, they see the victim ultimately bleed to death, implicating themselves by looking. Virtual reality, VR, becomes RV, Real Violence, 2017.

House with Face, 2017, epitomizes the artist's ability to create familiar yet disquieting visual forms. It depicts a quaint log cabin whose roof appears as a distorted, grimacing, witch-like face with metal rings mounted on the forehead, cheeks, and chin, projecting from the figure's head like piercings.

Artists Friends Racists, an expansive visual collage from 2021, the year of the pandemic, is being presented on the ground floor of KUB. Twenty holographic fans mounted on a wall, revolving at high speed, create the illusion of imagery hovering in space, rotating, pulsating, and splintering. Emojis, Stars of David, and the arms of a cartoon character mingle with a selection of portraits of renowned and historic artists as well as images of Wolfson himself.

Contrasting with the projections that show Wolfson's admiration and appreciation of his friends and fellow artists are those displaying his disdain for repressive figures of authority and for the subtle and overt ways in which racism is embedded within modern white identity. Illustrating the point, visuals in the work display Dutch people in blackface celebrating Zwarte Piet and white people looking self-satisfied in the mirror, seemingly believing that they're guiltless. Employing scenes from the children's TV series Sesame Street and imagery of September 11, 2001, Wolfson juxtaposes high and low, harmless and devastating, cute and brutal. In between, the numbers of the fans appear, like a secret countdown or a code that we are unable to decipher.

The video work Raspberry Poser, 2012, is being screened on the first floor. The projection features a furious cartoon character, a condom roaming the streets of Soho, and an anarchy symbol that rapidly mutates into a heart and signs for the genders. Wolfson works through our fear of AIDS. Beads that look like candy or blood cells trickle out of the condom. Finally, the spiked sphere of a virus emerges, a shape we are now familiar with due to the pandemic. In this work, Jordan Wolfson confronts both sexual identity and inner conflicts, but provides no answers. Instead, Wolfson himself appears as a skinhead with a shaved head, roaming the parks of Paris. Raspberry Poser forgoes any irrevocable reality or clear moral assertions, and yet the video is still able to pose existential questions concerning love, life, desire, and death.

Collages made on wood or metal alloy supports are on display on the second floor, which Wolfson dubs Wall Objects. They are covered with photographic imagery and stickers, ropes or chains dangle down, many featuring symmetrically drilled holes. Some of the collages are reminiscent of workbenches, others of instruments of torture. Some are in the shape of a Star of David. Virtual and imaginary worlds intermesh in the physicosed with imagery signifying emotional frigidity, the menacing, and vengeful.

On the upper floor, a robotic figure dances in front of a mirror. Female Figure, 2014, sports knee-length boots, a white negligee, and blonde wig. Black, evil-looking eyes peer out from under a plague doctor's green mask. Wolfson has translated video technology into sculpture. The go-go girl undulates her arms in an amazingly graceful manner, her joints creaking to the rhythms of popular music. Wolfson voices the grimy figure that is intriguingly both repulsive and attractive: “My mother is dead. My father is dead. I'm gay.” An uneasy tension develops, not least because the sculpture makes eye contact with the viewer through the mirror.