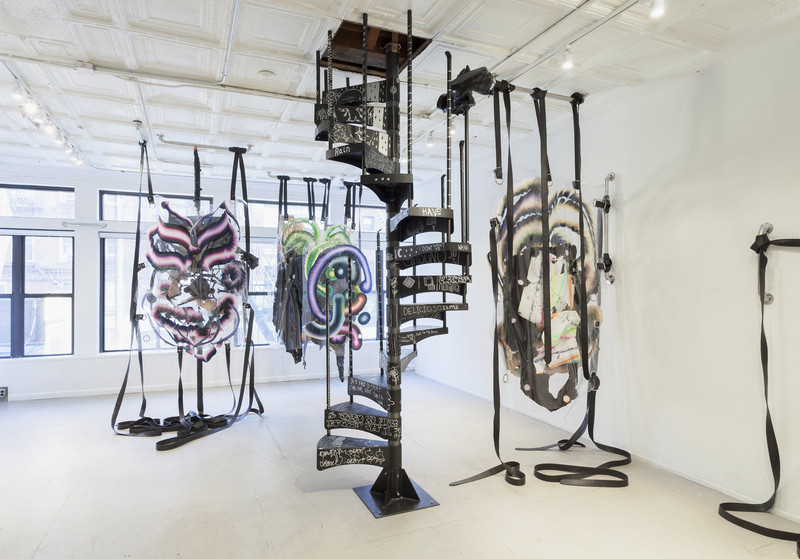 For this year’s summer program, KAMP KAYA, the New York based artists Kerstin Brätsch and Debo Eilers are invited to present their collaborative project KAYA. The title of this ongoing project refers to a real person, Kaya the by now 19-year-old daughter of one of Eilers’ childhood friends from Texas. The collaboration with Kaya began in 2010 when she was 14 years old. Since then she forms the departure and focus point of their exhibitions, performances, and interventions. Kaya appeared in photographs, collaborated in the productions as a painter, or as a participatory performer, playing the guitar or painting a silicone mold of Eilers’s body during their shows in New York, Los Angeles, Milwaukee, and Kassel.

Kerstin Brätsch and Debo Eilers both consider their own practices — painting and sculpture — not only as a medium, but the subject matter and the base material of a conceptual and multidisciplinary work. They are interested in continual processes of displacement, variation, and reproduction, in appropriations of digital imaging, as well as of art historical styles. Within their collaboration with Kaya they elaborate on the possible creation of a third body and therewith the potential extension of their sculptural and painterly investigations. What happens if painting or sculpture literally became a body? Above being triggered by the interest in youth and youth culture (aka growing up, and becoming gender), by involving another person with her own background and personal history KAYA is at the same time an approach to explore an unknown territory, an approach to embrace the unpredictable, and diffuse classifications while challenging notions of authorship, originality, and exchange value.

The KUB Arena embodies the unfamiliar, presenting a program that consistently questions the art institution. It is the place within Kunsthaus Bregenz where art enters into a dialogue with alternative modes of cultural production, probing new spaces that enable contemporary art to be experienced in unconventional ways. On the occasion of KAMP KAYA, once again, the KUB Arena will temporarily abandon the Kunsthaus during the summer, to explore various locations around the town and its vicinity instead. Kaya will be visiting Bregenz between August 27 and 30, on her first trip to Europe, to spend some summer days by the lake with Kerstin Brätsch, Debo Eilers, and other invited guests. Together they will interact with the everyday activities, and occupy various sites along the shores of Lake Constance, the peak of the Pfänder and the public space in Bregenz. The audience is invited to join this summer camp and gain insights in this collaboration while participating in the appearances, performances, screenings, and talks.
www.kunsthaus-bregenz.at