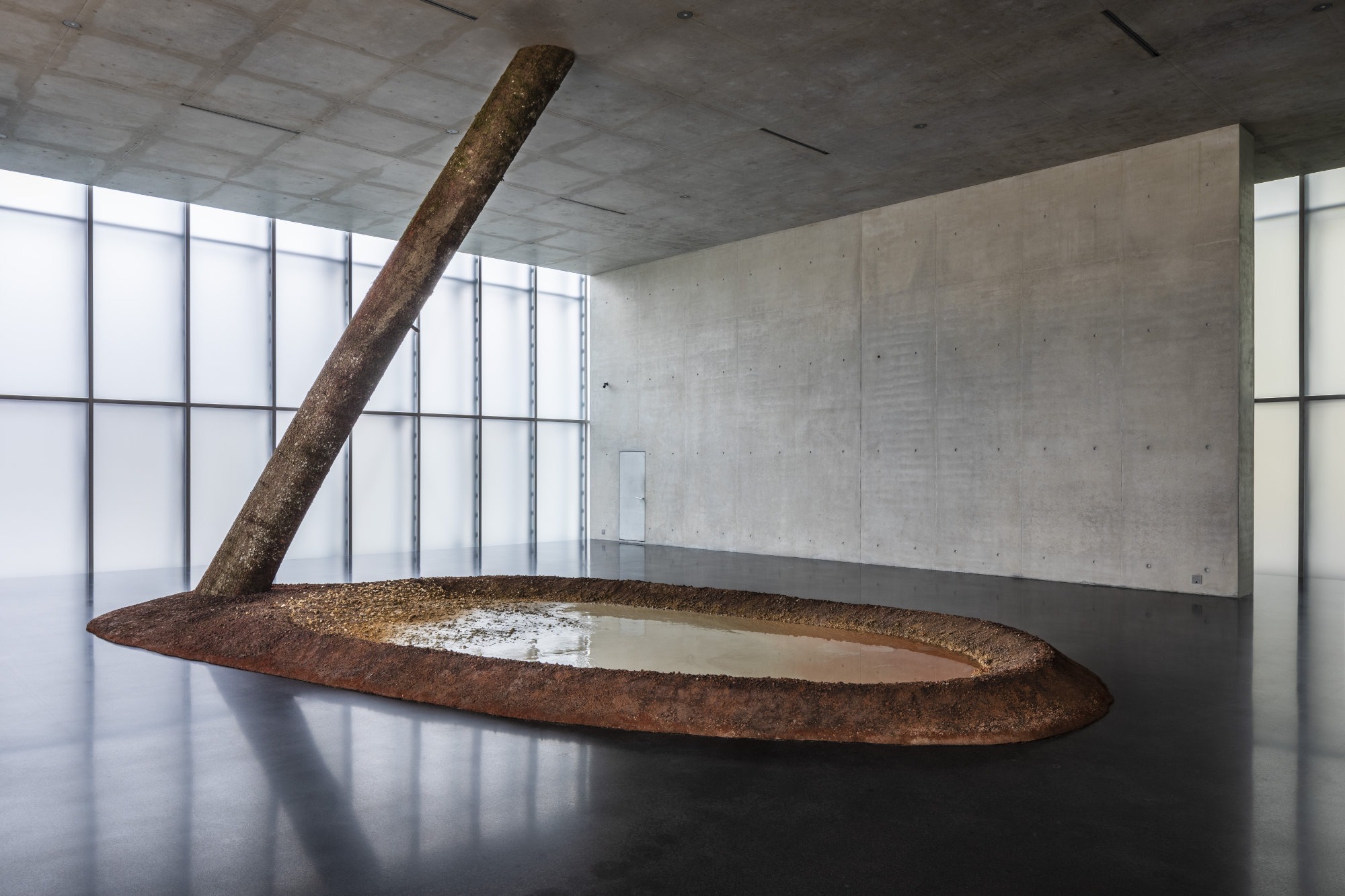 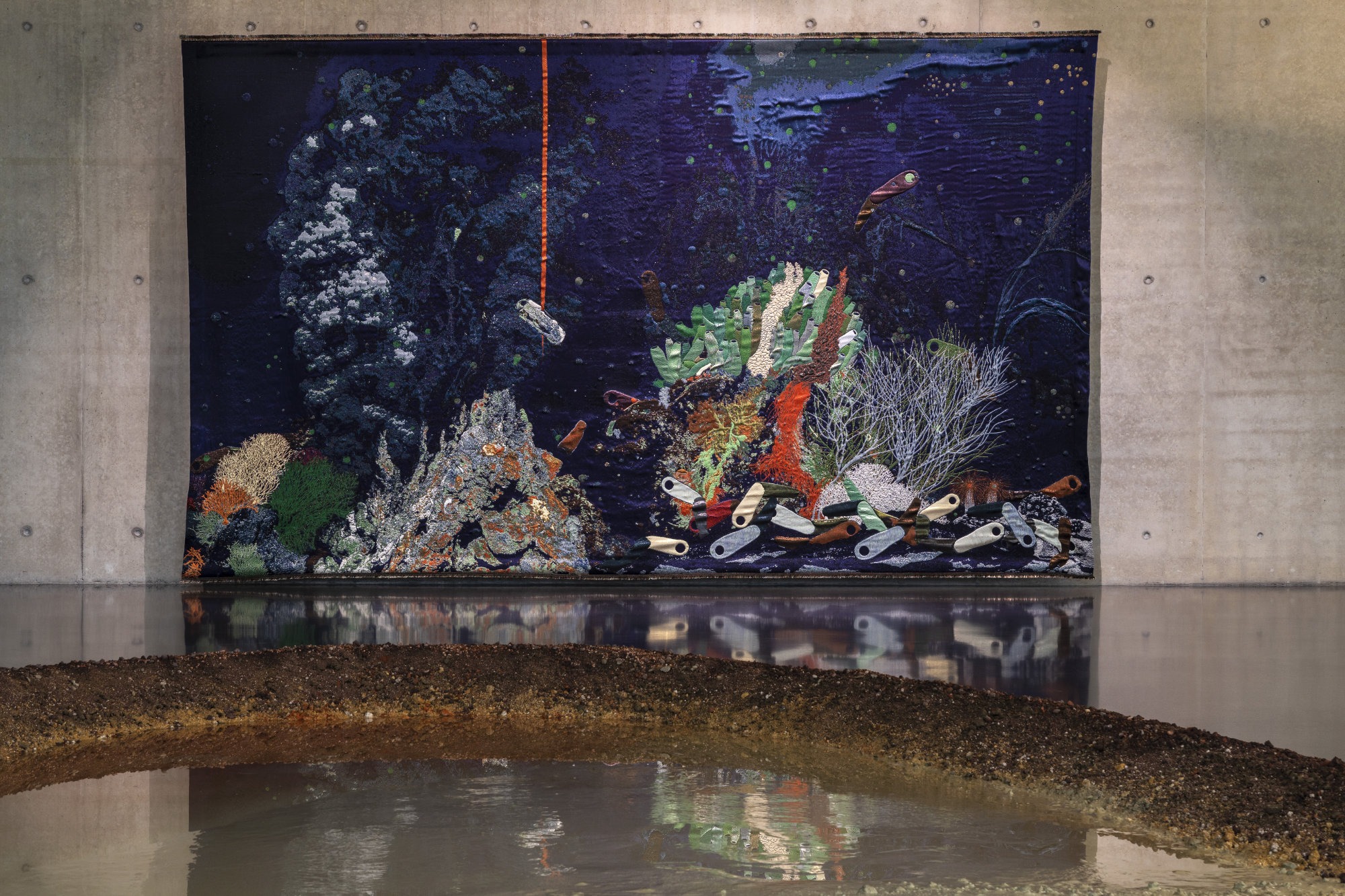 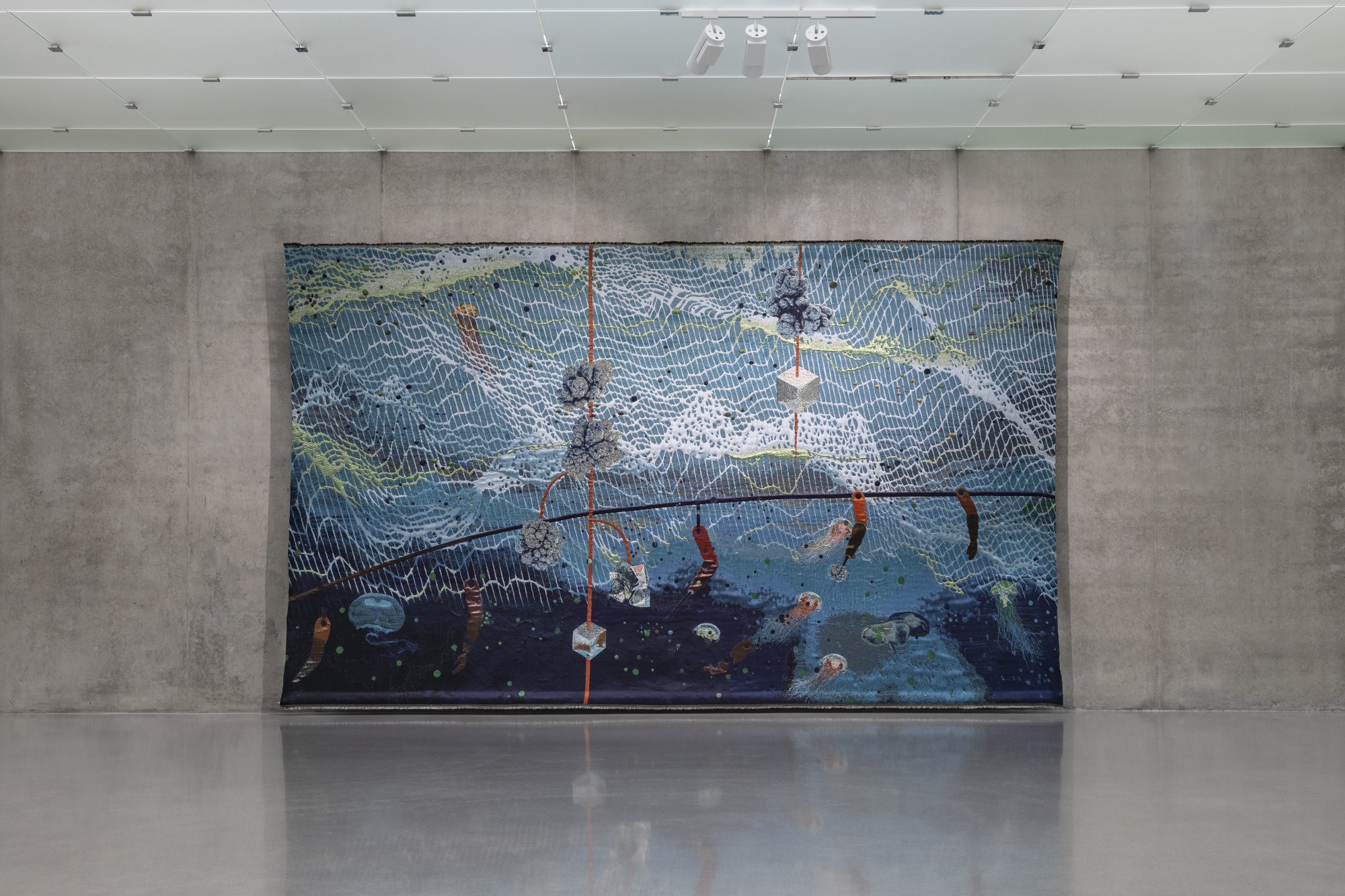 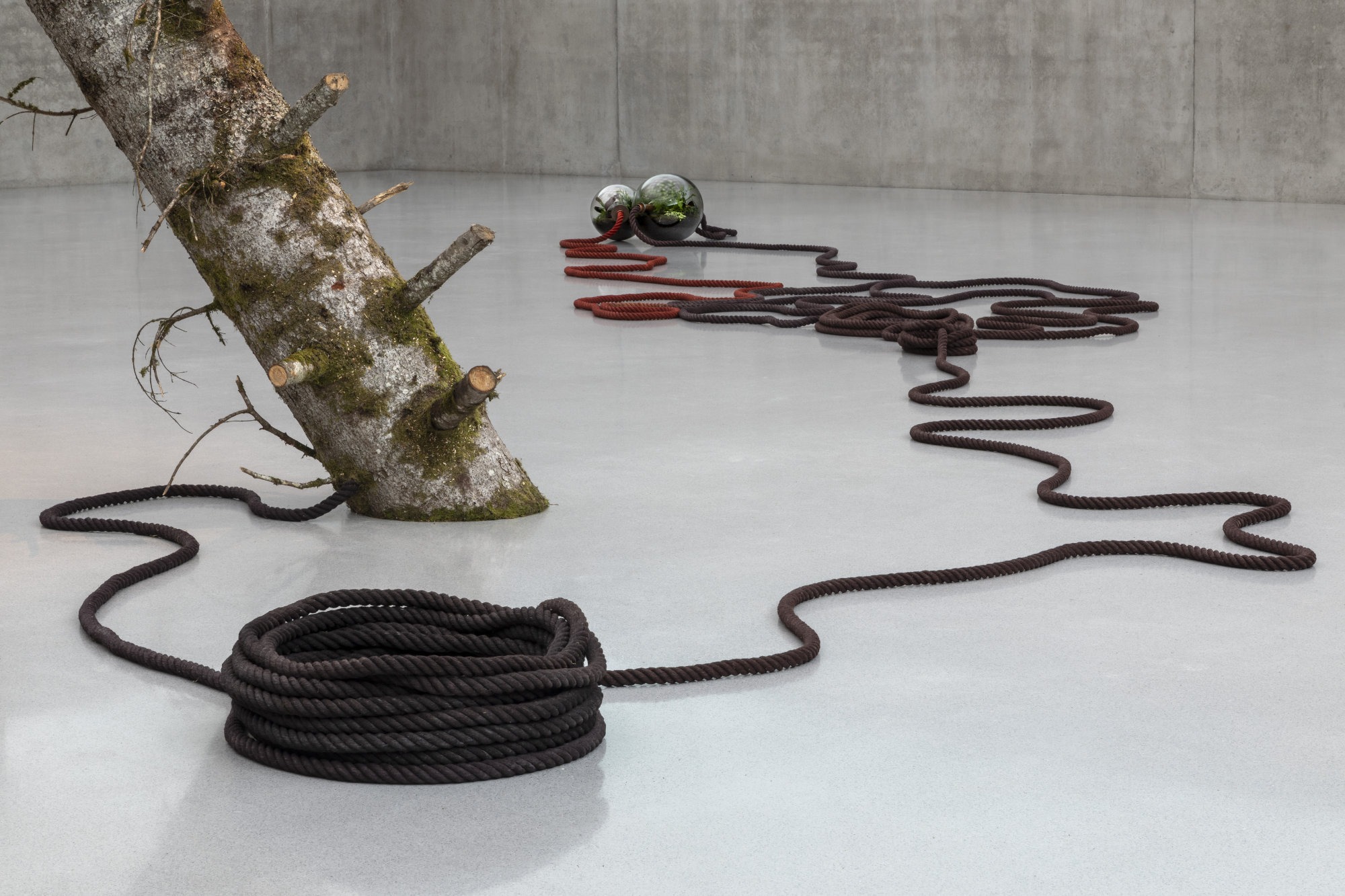 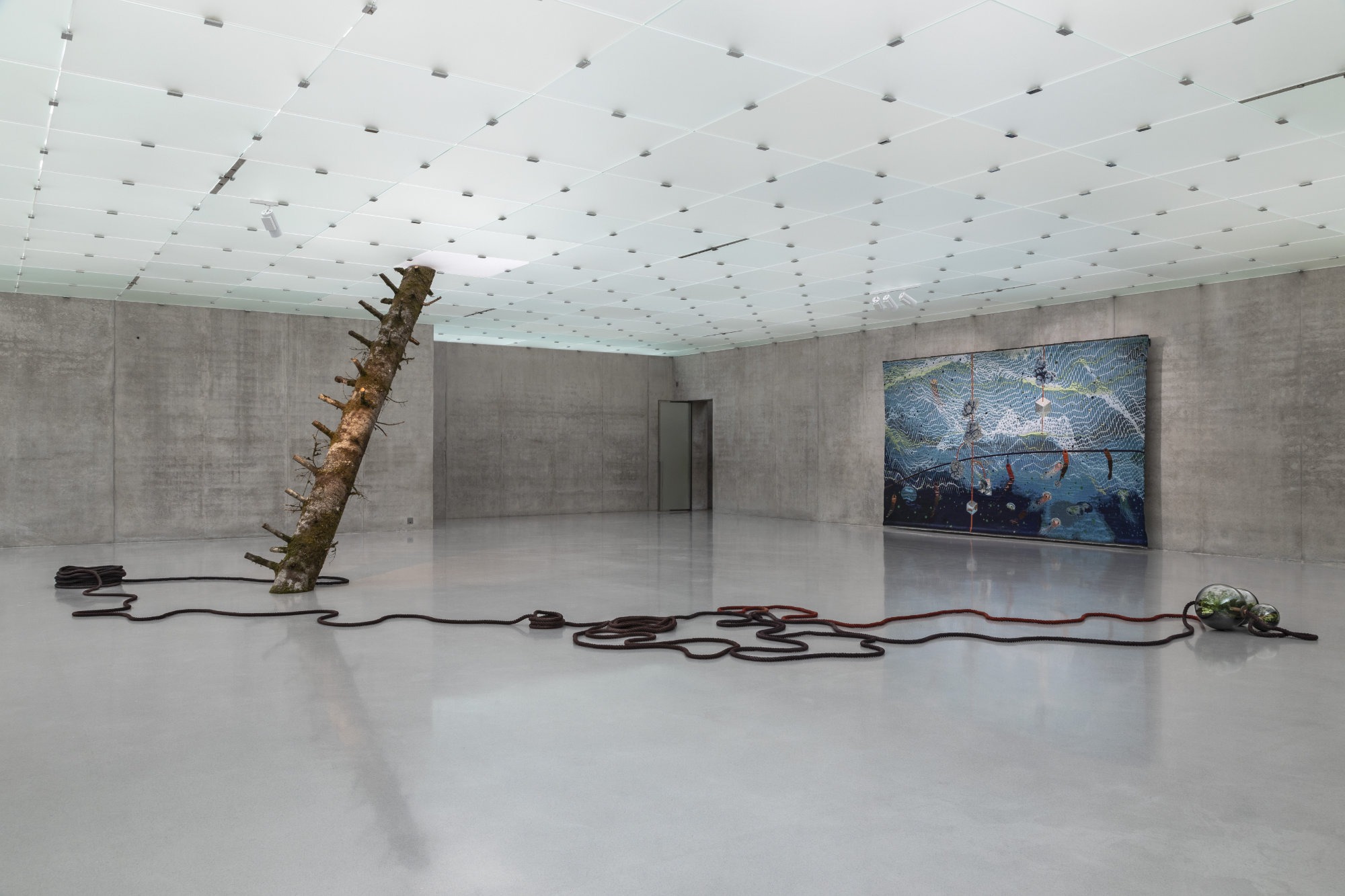 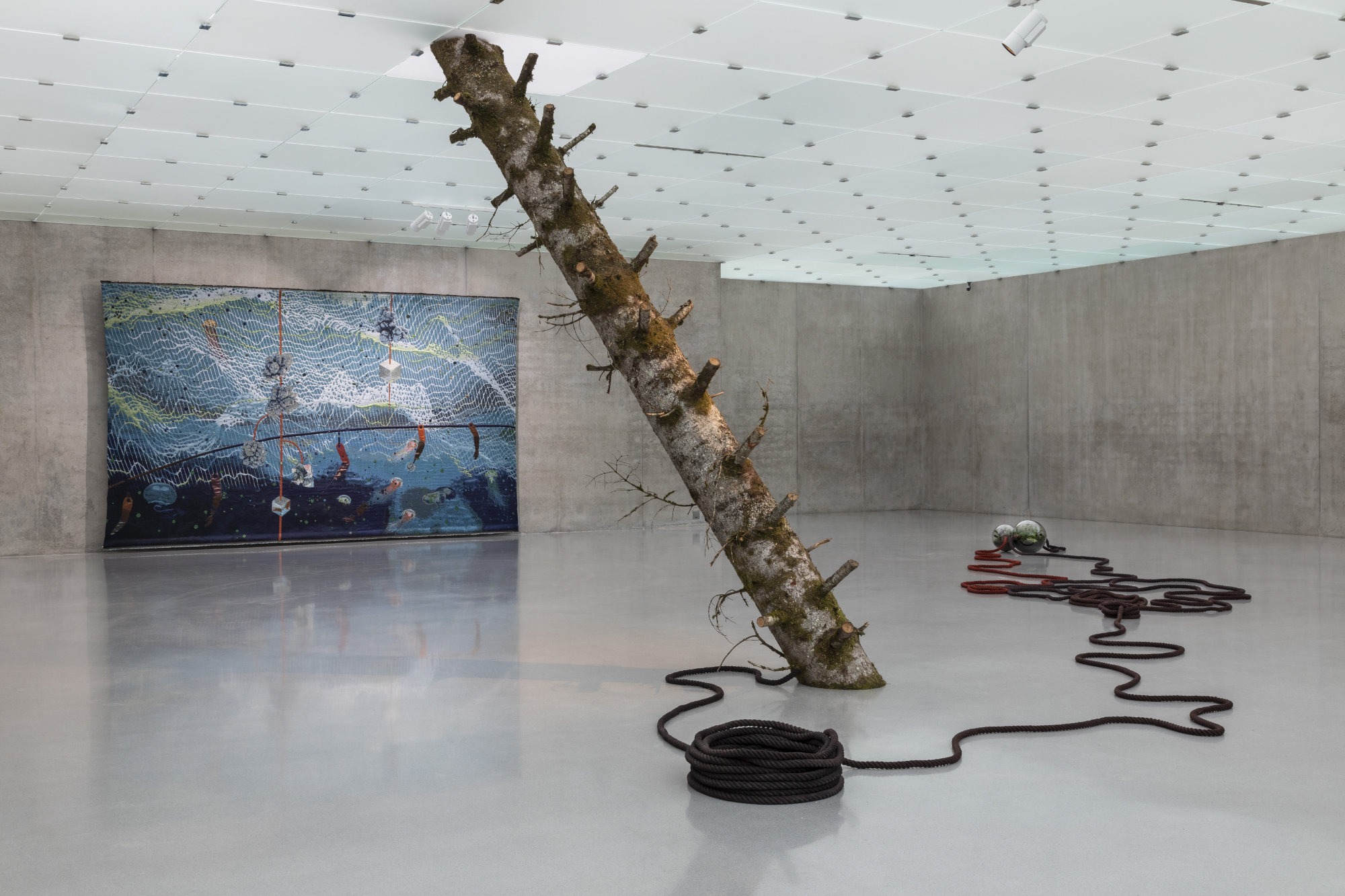 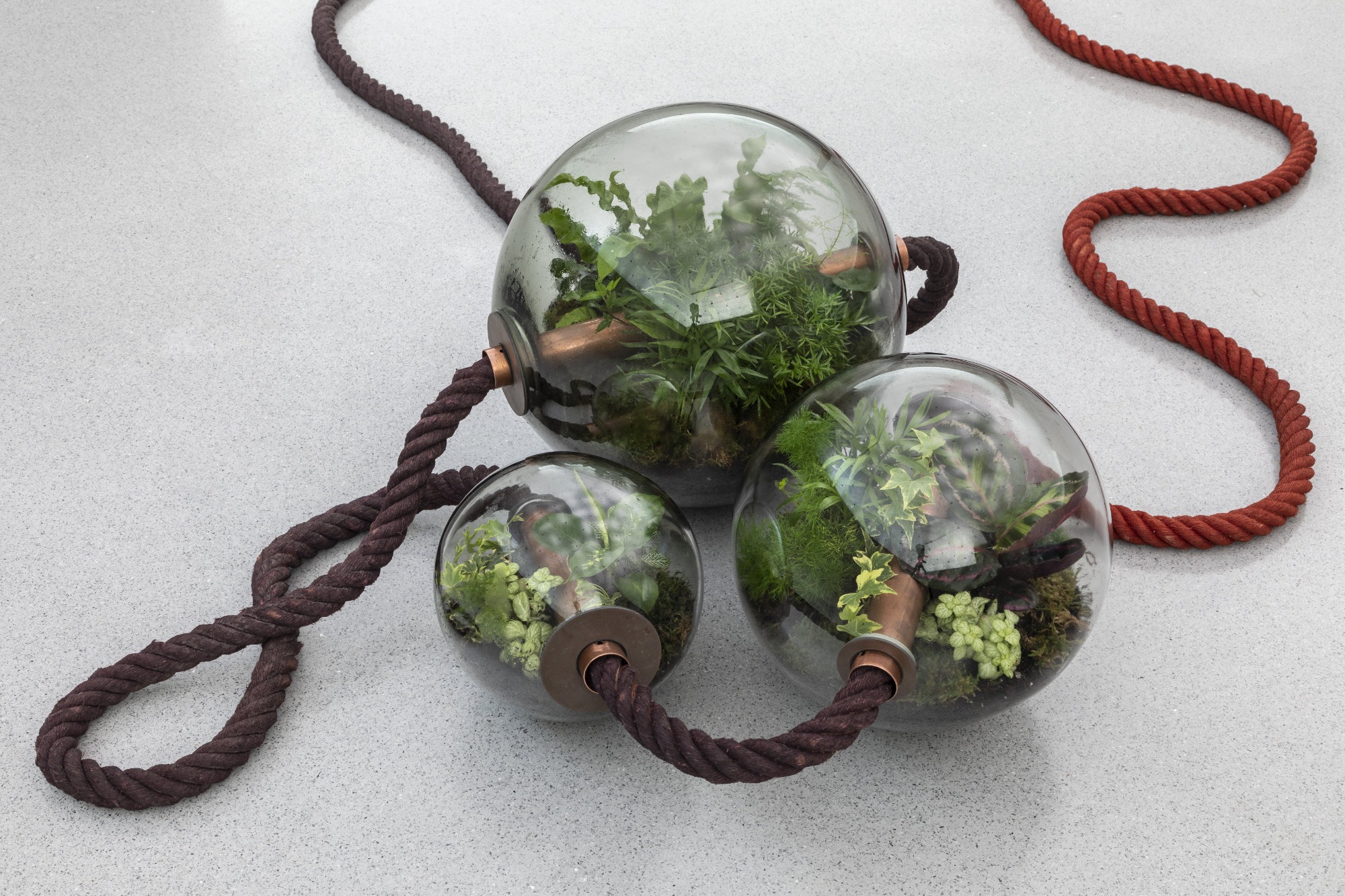 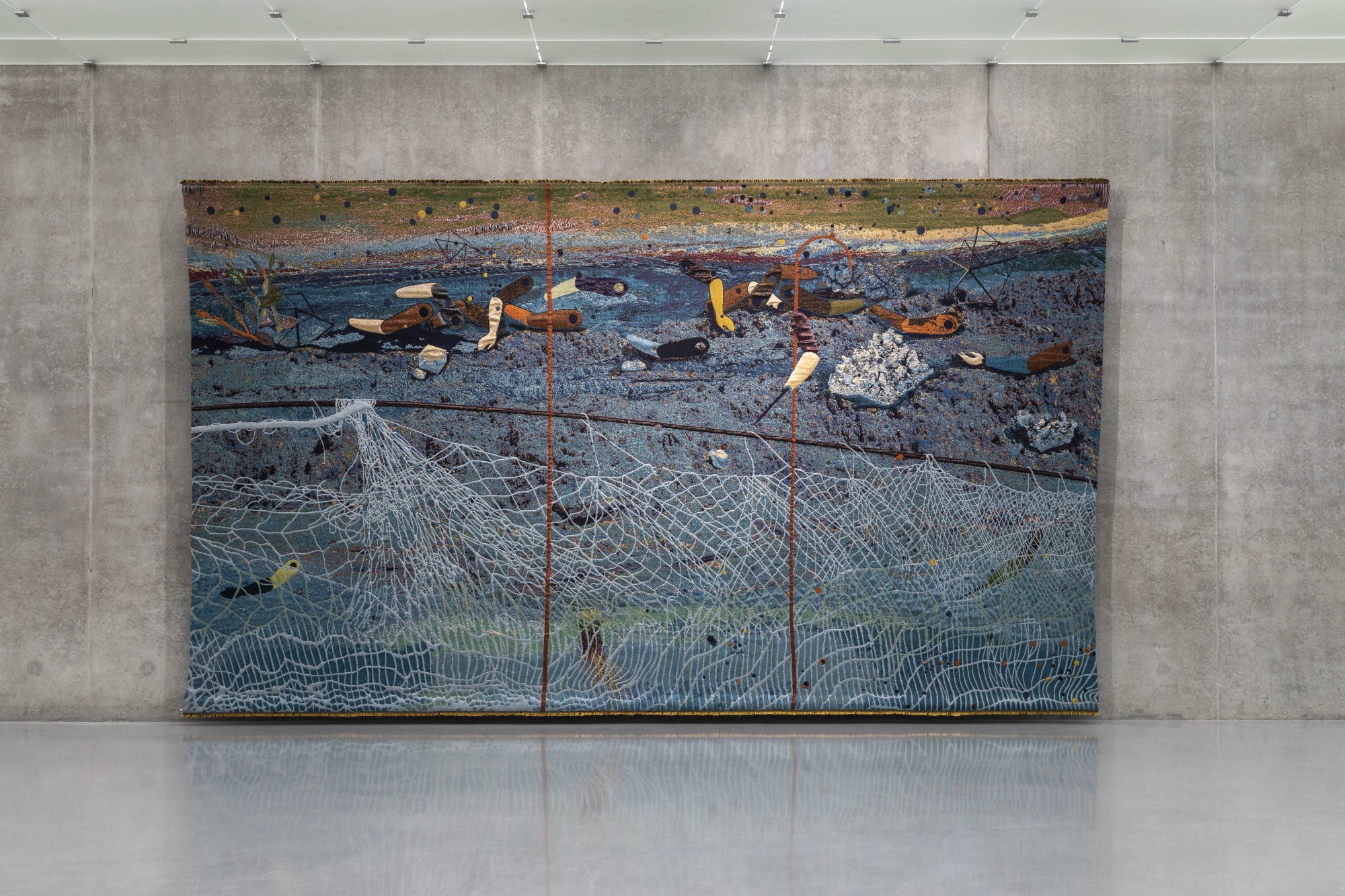 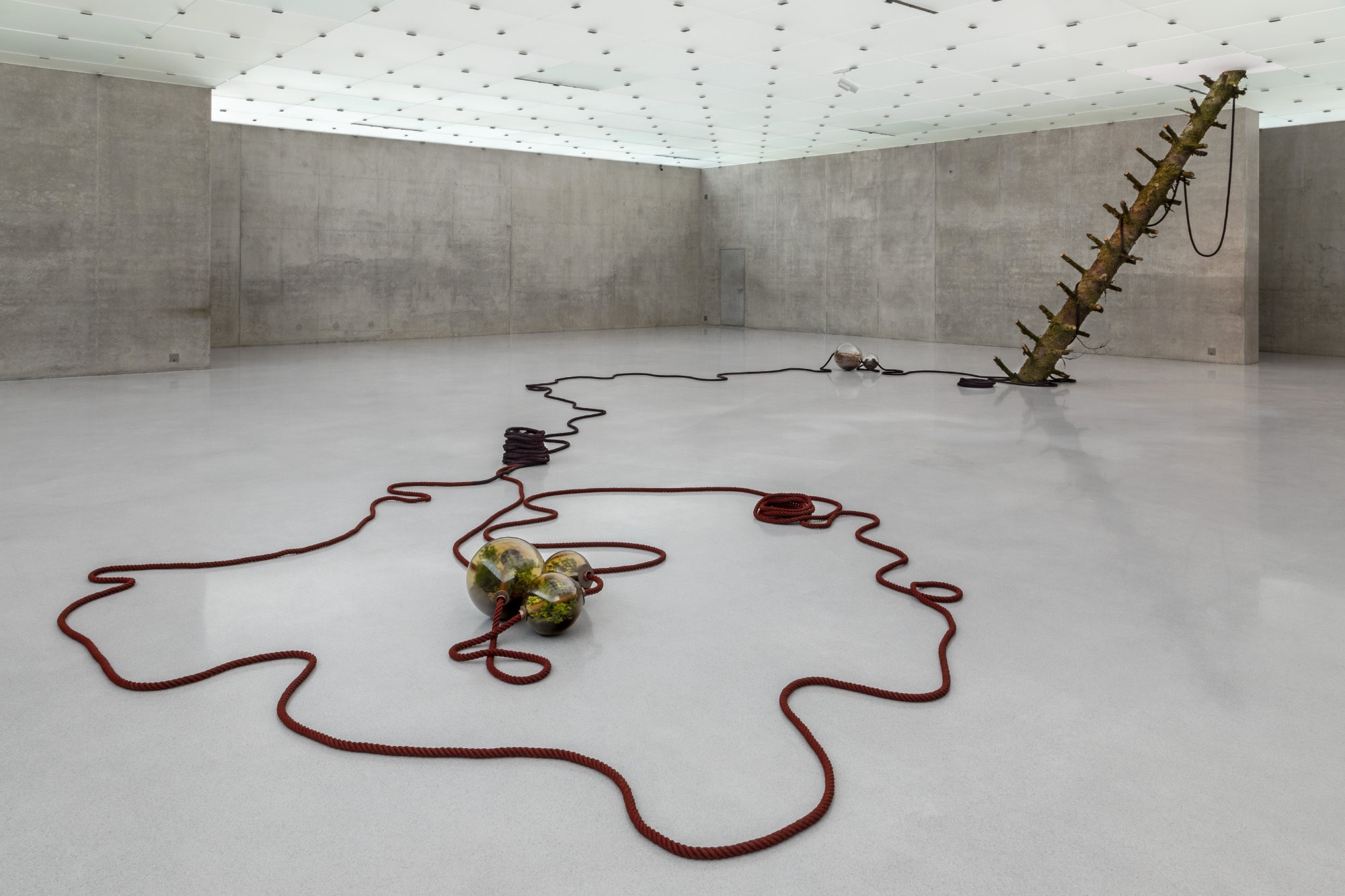 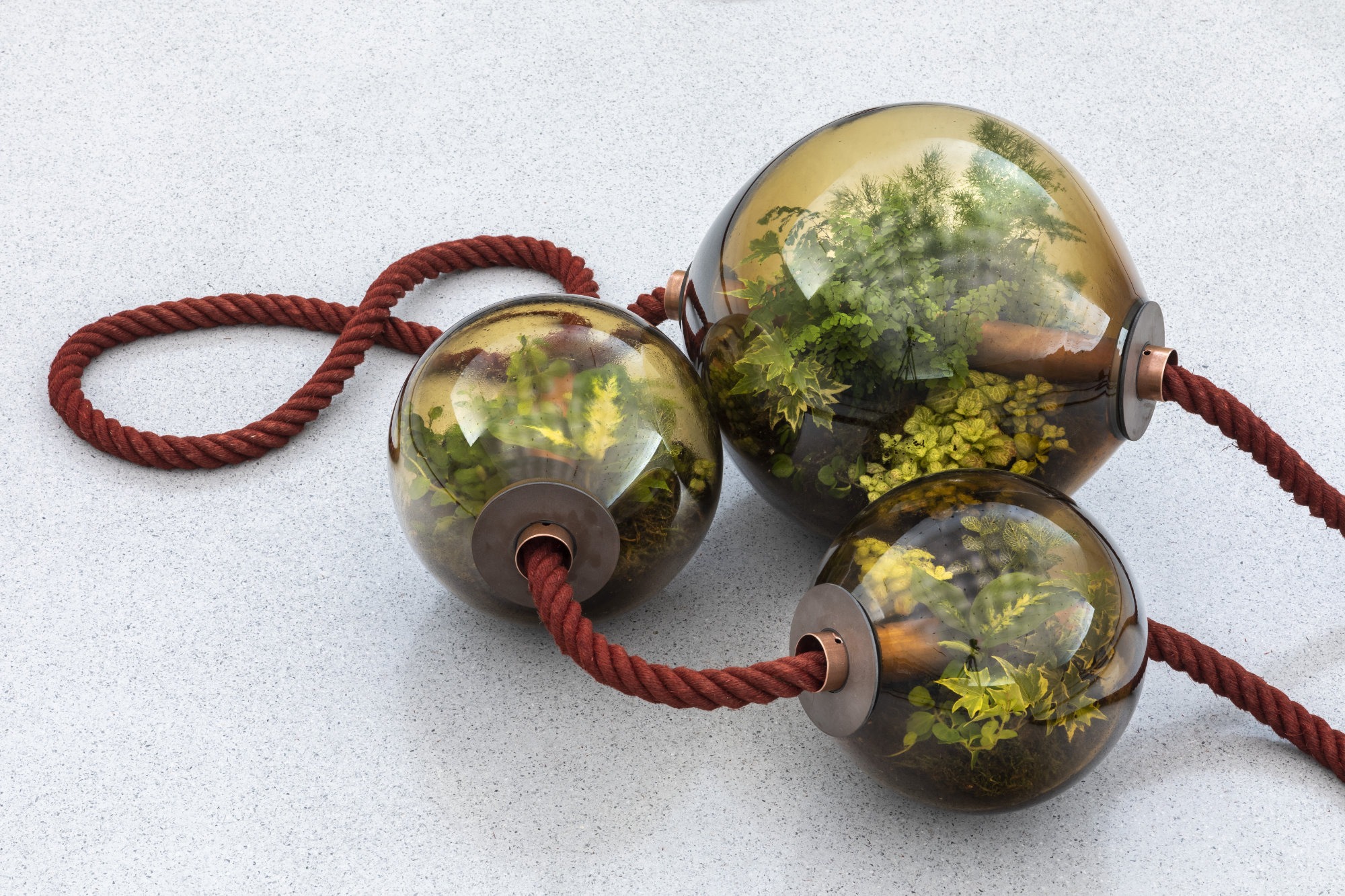 The Earth’s survival is reliant on water. Otobong Nkanga conveys such a message in four vibrant, large-scale tapestries depicting the entanglement between land and ocean. The woven works, hanging separately on each floor of Kunsthaus Bregenz, render the depths of the sea, the seasons, and climatic zones.

On the ground floor of KUB darkness prevails; a small pond near the glass wall glistens with life, as in Unearthed – Abyss, the first of four tapestries. A tree trunk rises from this shallow hollow, appearing to pierce the ceiling and penetrate the subsequent floors.

On the following two floors ropes perforate the now tapering trunk, with glass spheres tied to the cords and in the presence of the tapestries Unearthed – Midnight and Unearthed – Twilight. The interconnected, movable spheres are opulent glass objects that have been fabricated in Murano. The amorphous containers are climatecontrolled display cases, colored terrariums for various lifeforms, which Nkanga has filled with soil and plant samples. On the upper floor, the ragged, scorched top of the tree protrudes from loamy soil, overseen by Unearthed – Sunlight the last of the four tapestries. The ascent through Kunsthaus Bregenz becomes a journey through the exploitation of nature, a path towards desolation, yet one where islands of life may still exist and hope germinates.

Nkanga has also written poems, ingrained into earth slabs, for each of the four floors of Kunsthaus Bregenz. The monumental tapestries are unique originals that have been specifically conceived for the series of spaces at Kunsthaus Bregenz and its likewise massive concrete walls. Nkanga produced them on a new type of highly complex rapier weaving machine manufactured by the DORNIER company in Lindau, in collaboration with the TextielLab at the TextielMuseum in Tilburg (Netherlands). The tapestries function like windows into a vivid world full of life on the periphery of a barren landscape. Colorful fish and shells populate coral reefs within the intense, tropical blue of a deep, pristine ocean. The fabrics are as precise as they are painterly; amongst the warp threads’ streaks of color, sometimes apparently swaying like maritime streams, rounded forms, spheres, celestial bodies, and poetic medallions appear, providing an insight into both maritime life and a particular, interconnective “way of thinking,” explains Nkanga.

The exhibition at Kunsthaus Bregenz is being created in close collaboration with both regional and international partners, including Martin Rauch, the Vorarlberg-based pioneer in earth structures, and experts from the renowned at the TextielMuseum in Tilburg, where a large-scale rapier weaving machine, newly developed by the Lindau-based company DORNIER GmbH, has recently come into operation.

Otobong Nkanga (born in 1974 in Kano, Nigeria) is a visual and performance artist, who is based in Antwerp. Nkanga studied at the Obafemi Awolowo University in Ile-Ife, Nigeria, and later continued her studies in Paris at the École nationale supérieure des beaux-arts and she finished her Masters in the Performing Arts at DasArts, Advanced Research in Theatre and Dance studies, Amsterdam. In 2002 and 2003 she was artist in residence at the Rijksakademie van beeldende kunsten in Amsterdam and in 2013 she was awarded a scholarship from the DAAD Artists-in-Berlin Program.

In 2015 Nkanga won the Yanghyun Art Prize and received in 2017 the Belgian Art Prize. In 2019 Otobong Nkanga was the recipient of the Flemish Cultural Award for Visual Arts — Ultima, the 2019 Sharjah Biennial Award, the Special Mention Award of the 58th Venice Biennale, the Lise Wilhelmsen Art Award and the Peter Weiss Prize of the City of Bochum. She had solo shows at the Villa Arson, Nice (2021), Martin-Gropius-Bau, Berlin (2020), Tate St. Ives (2019/2020), Museum of Contemporary Art, Chicago (2018), and M HKA, Museum of Contemporary Art, Antwerp (2015).