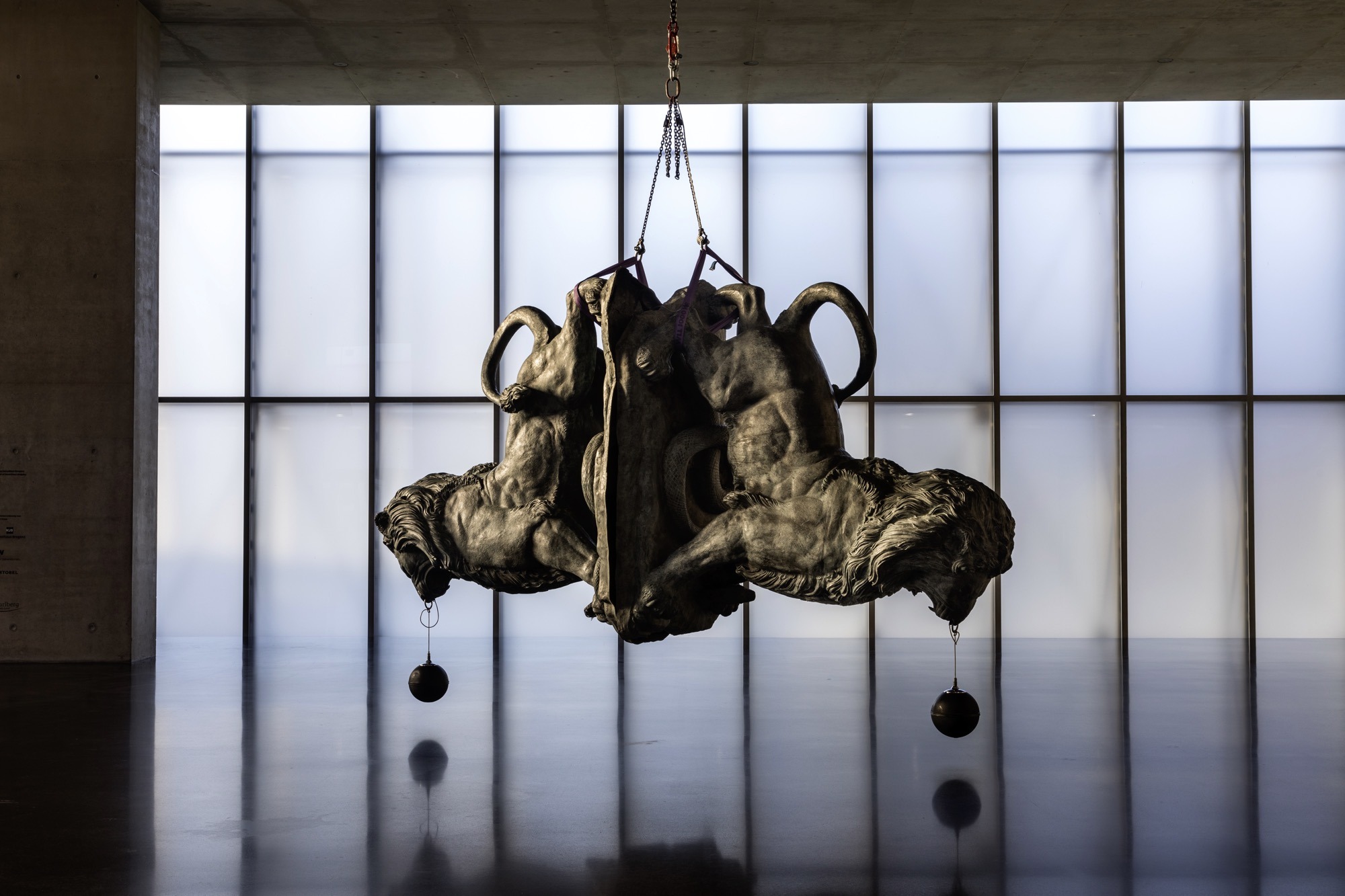 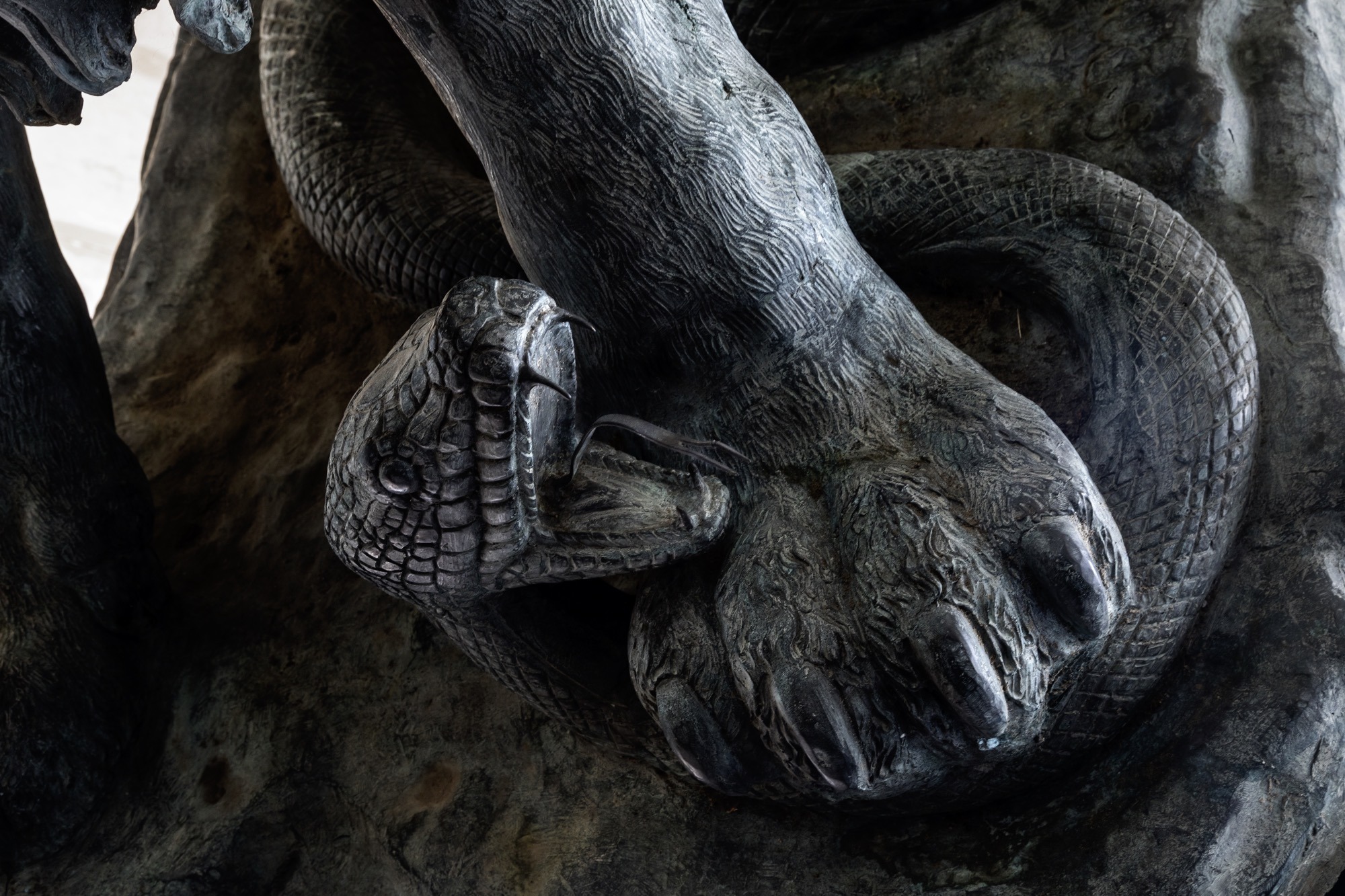 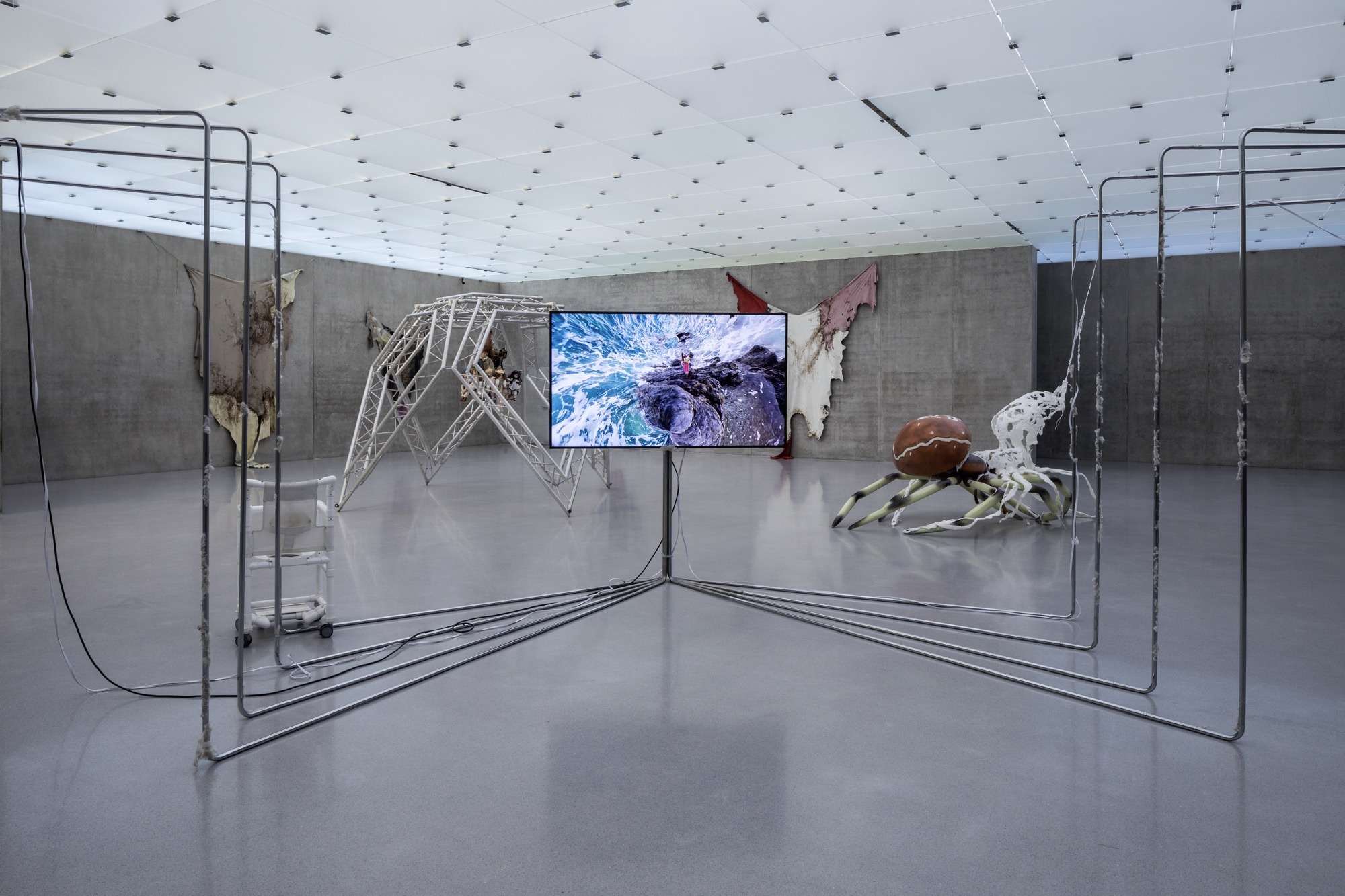 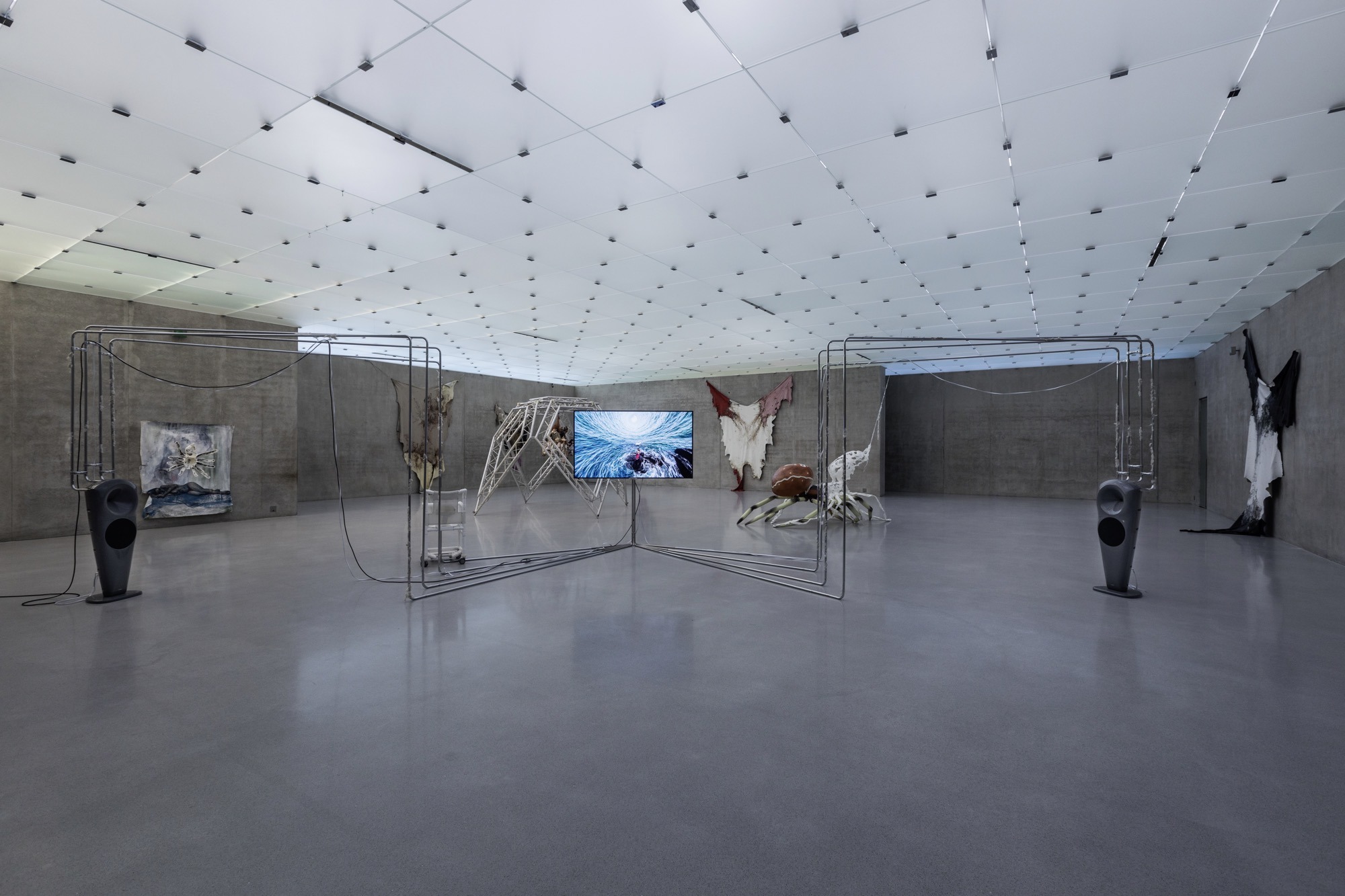 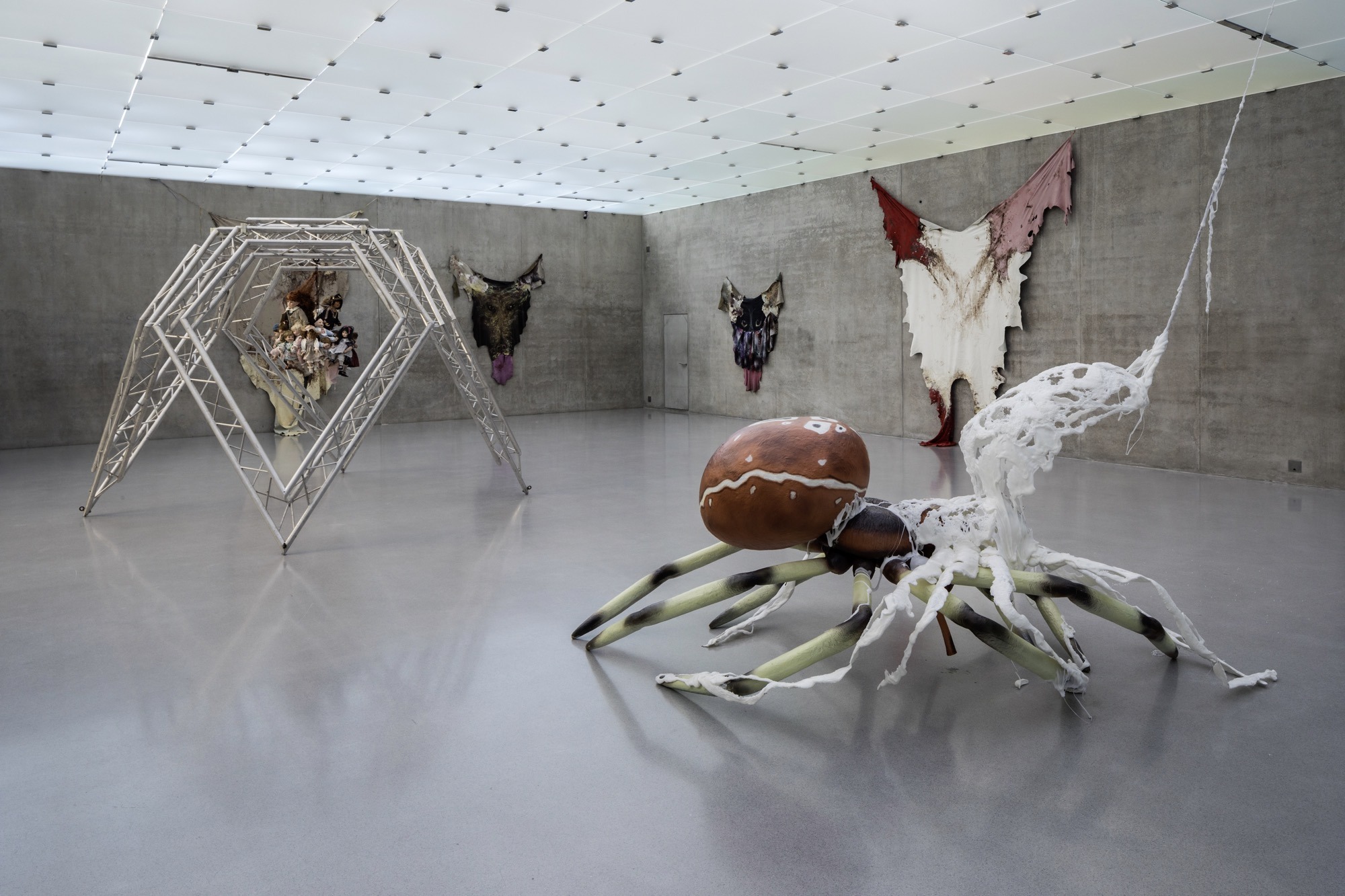 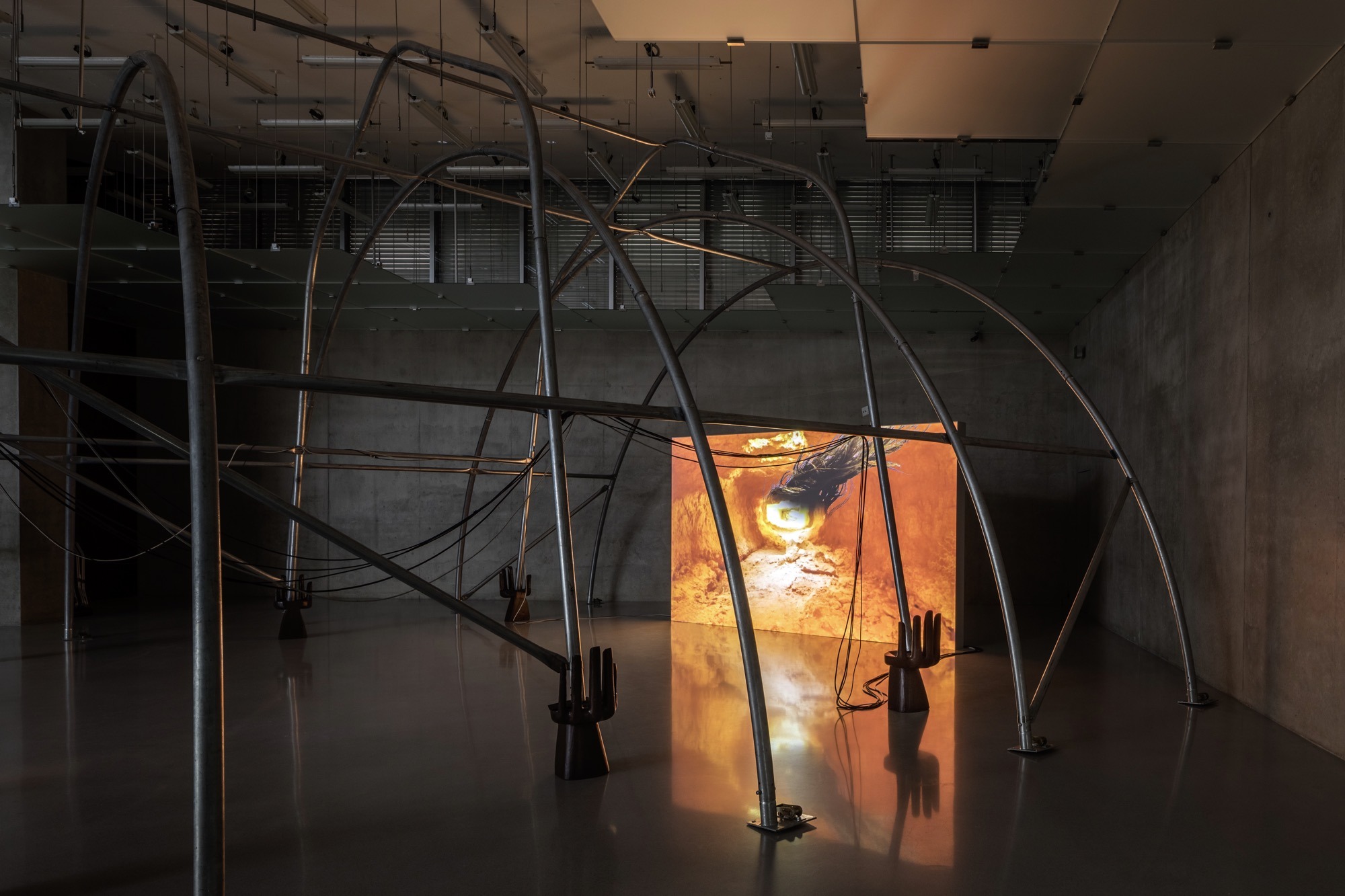 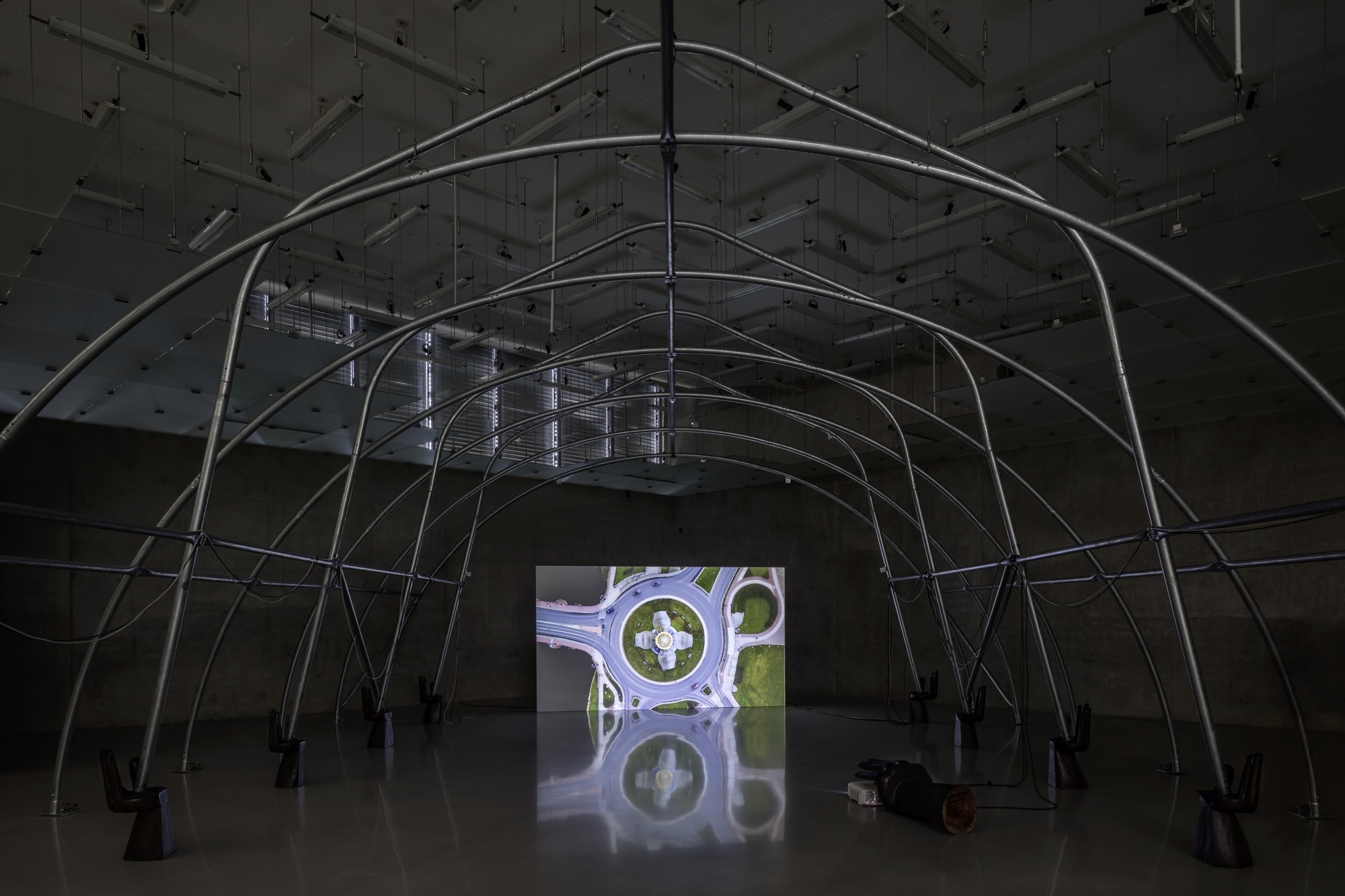 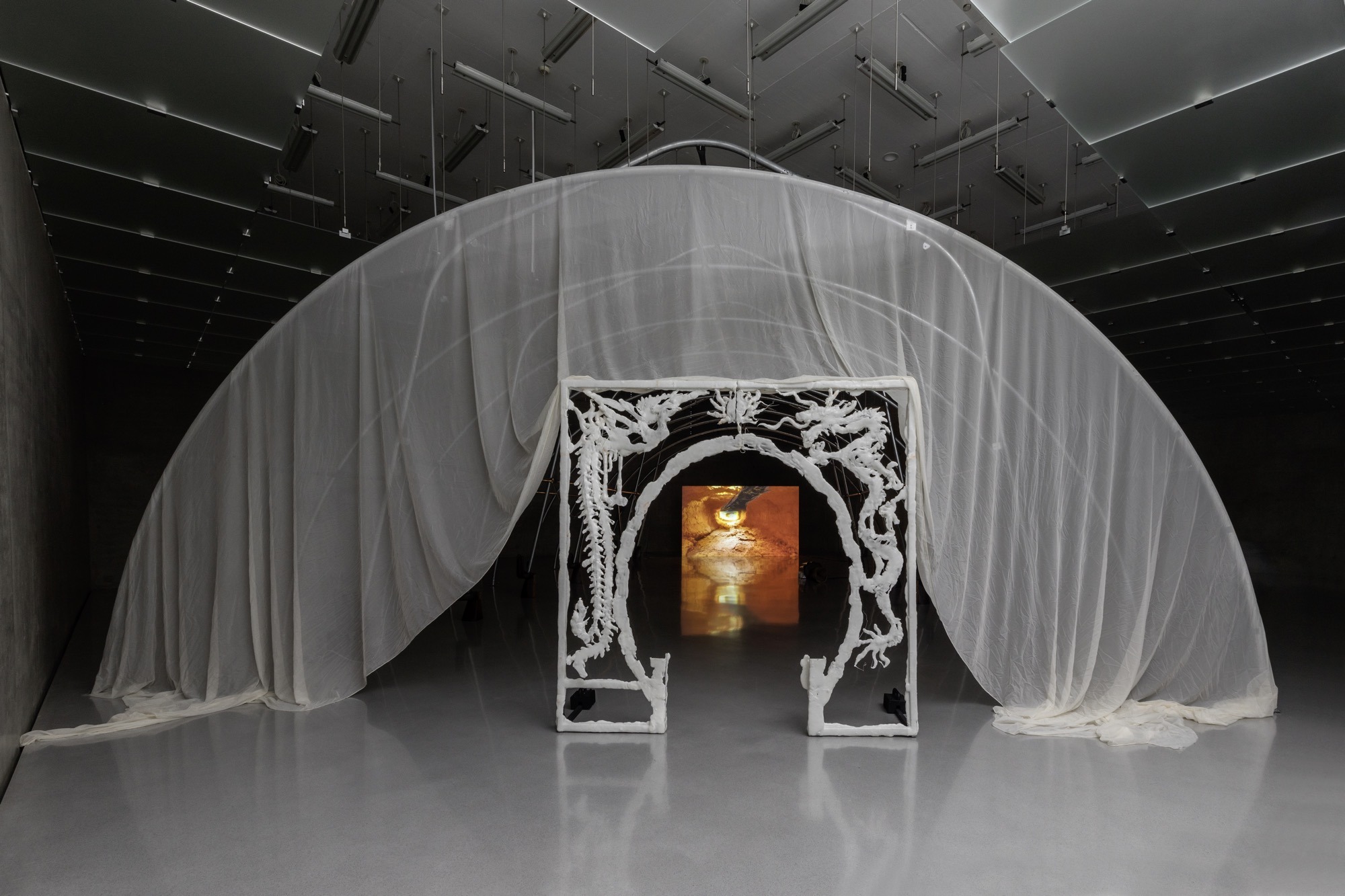 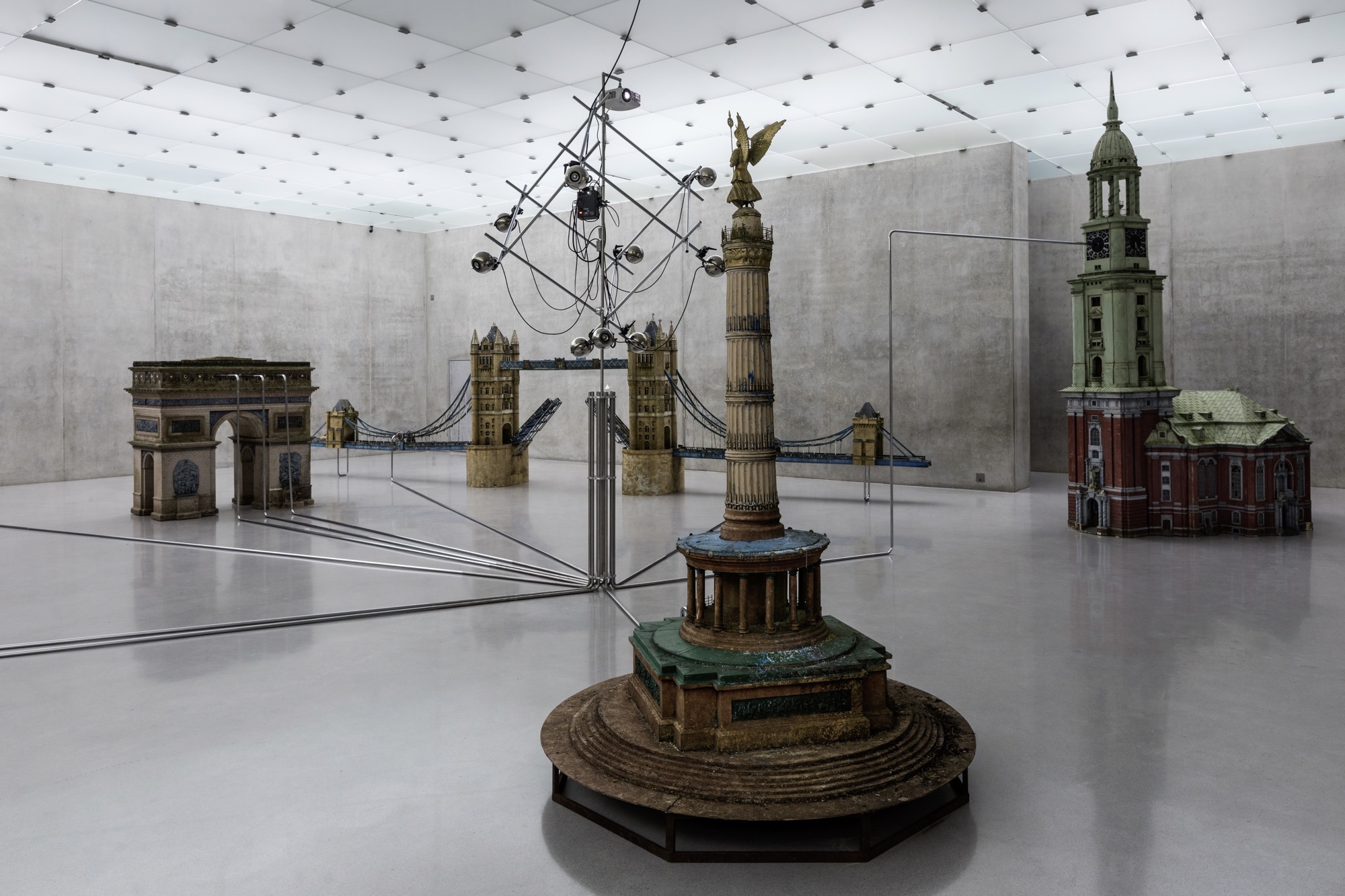 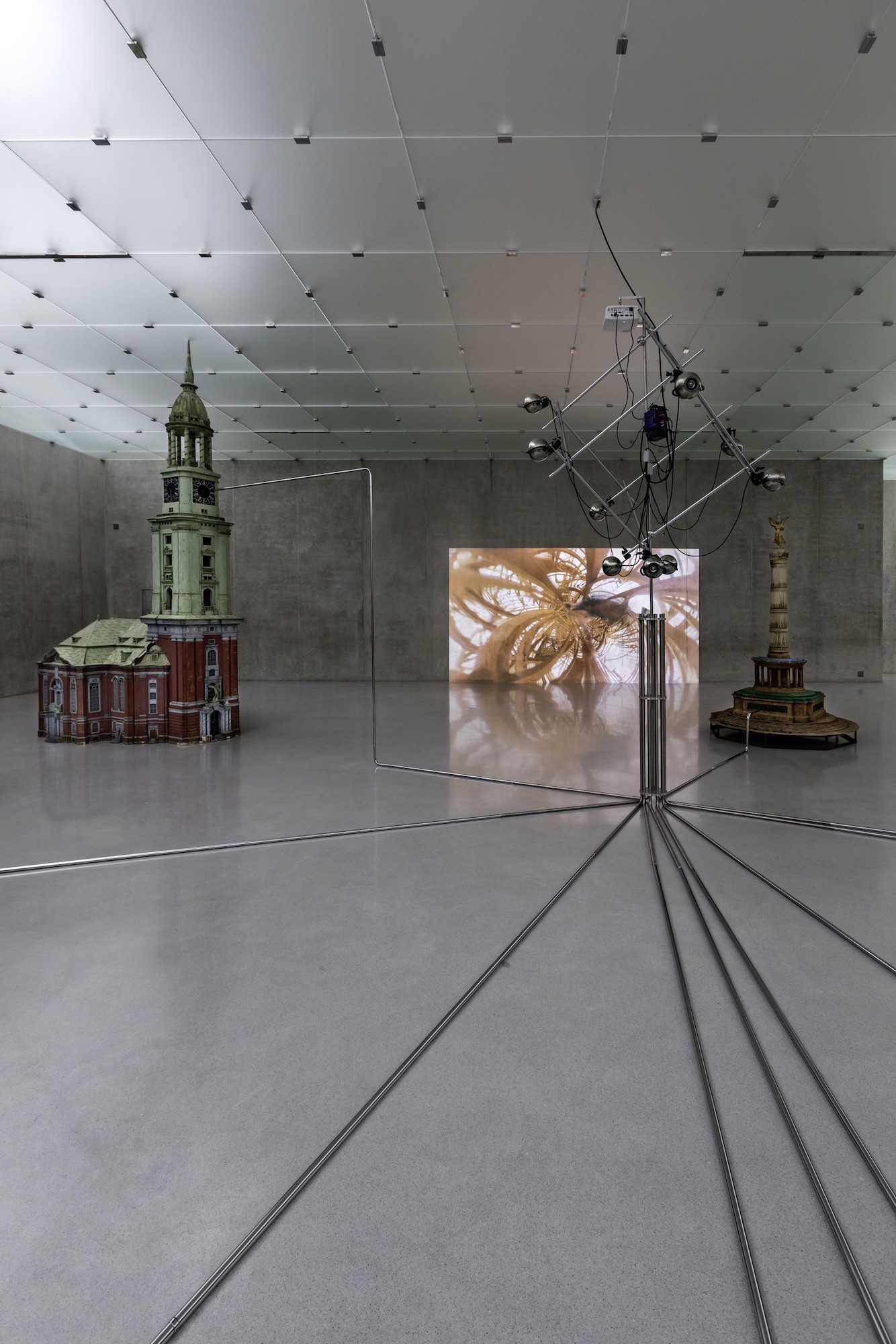 Tired hides, secured at their ends, hang wearily from the walls. Raphaela Vogel has painted goat and elk hides and weighted them with polyurethane. They display feral gestural traces, scenes of violence, and fleeting faces that gaze out like dull mirrors from the almost triangular pieces of leather. Raphaela Vogel sites such imagery next to spatially expansive video sculptures. Delicate rods, plastic sheeting, and technical equipment are fixed components in these arrangements. The rods create an impression of drawings in space, the sheeting of amorphous stage scenery, and the devices of flickering spotlights. Some things seem to be mobile, whilst others exist in a labile state or are set in violent tension. The components are attached to each other by ropes and evoke processes of physical transformation. Aluminum trusses encroach into the space or congregate as giant candelabras to totalitarian statues. These elements from the world of technology contrast with the video imagery that Vogel edits from various fragments, such as self-portraits and drone footage. The latter circles violently, is rotated or mirrored, kaleidoscopic effects and dizziness result. Another group of works by the young artist involves casts in acrylic, usually life-size sculptures of animals that repeat themselves, or isolated sculptures that can assume giant proportions.

Raphaela Vogel generates links between sculpture and video, space and the readymade. Her art exists in a physically palpable tension and in a richly contrasting interplay between imagination and scale. Powerful and energetic spaces evolve, bringing into focus issues pertaining to human, especially female, subjectivity. Kunsthaus Bregenz, with its tranquil industrially seeming spaces, is not only suitable for such spatially expansive sculpture, its scale alone provides the very best scenario for Vogel's experiments.

Raphaela Vogel (*1988, Nürnberg) studied at the Akademie der Bildenden Künste Nürnberg under Michael Hakimi and at the Städelschule in Frankfurt/Main under Peter Fischli. Her solo exhibitions have included ones at Kunsthalle Basel (2018), Berlinische Galerie (2018), Volksbühne Berlin (2017), BQ Galerie, Berlin (2016), and at Bonner Kunstverein (2015). Works by Raphaela Vogel were on display at Haus der Kunst in Munich till June 30, 2019. Raphaela Vogel lives and works in Berlin.

As part of the exhibition, a film by the German filmmaker Helke Sander (*1937) is being screened. The approximately eleven-minute black-and-white film shows a young woman climbing a construction crane in Hamburg with two small children. On the pamphlets that she throws down from the crane, she demands affordable housing. Sander shot the film Nr. 1 — Aus Berichten der Wach- und Patrouillendienste in 1984 against the background of a true story. In 1985 she won the Goldener Bär for best shortfilm for this work.
Helke Sander’s films were one focus of the Reptrospektive at the 69th Berlinale in February 2019. Under the title Selbstbestimmt. Perspektiven von Filmemacherinnen it explores the filmmaking of women directors during the period from 1968 to 1999.
www.kunsthaus-bregenz.at