That's The Way We Do It 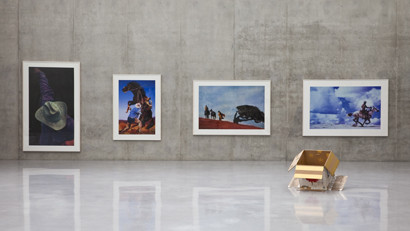 Exhibition view
THAT’S THE WAY WE DO IT
The Techniques and Aesthetic of Appropriation
From Ei Arakawa to Andy Warhol
16 April - 3 July, 2011

Does it really matter whether a work of art is painted, carved in wood, made of found objects, or created on a computer? What difference does it make whether pictorial worlds are newly invented or whether they derive from the cultural memory and the omnipresent image repertoire of our media-driven environment? Spread over the three upper floors of the Kunsthaus, the multifaceted group exhibition That’s the way we do it addresses precisely these highly topical issues. The exhibition includes such prominent artists as John Baldessari, Barbara Kruger, Richard Prince, and Andy Warhol, as well as the world-renowned filmmaker Jean-Luc Godard. The exhibition also gives visitors a chance to discover young artists such as Ei Arakawa, Simon Denny, and Tobias Kaspar, who are exhibiting in Austria for the first time.

Andy Warhol’s oeuvre affords a good example of how a work’s status and interpretation can be influenced by the technique employed in the work. In his early paintings on canvas he introduced the technique of mass reproduction silkscreen printing into the sublime arena of art, decisively contributing as one of the most influential twentieth-century artists to an epoch-making change. Subjects and images from pop culture, politics, and business enter these seminal works by means of the very devices with which they are negotiated and reproduced outside of art. Warhol’s strategy, no less simple than effective, consists in not only translating images from one context to another, but in subject choice, cropping, color changes, and the application of one and the same motif to a single canvas.

Appropriation, recombination, and repetition are distinguishing features of the legendary filmmaker Jean-Luc Godard’s Histoire(s) du cinéma, today acknowledged as a milestone in cinematic history. So far in the German-speaking world (not least because it is over four hours long and of exceptional artistic quality) this film could only be seen at documenta X (1997), and then embedded in a theme evening on ARTE television. Its presentation at the heart of the exhibition gives visitors a rare chance to experience this outstanding work as a big film installation.

Just as Histoire(s) du cinéma turns its back on unitary narrative and straightforward storytelling, so too That’s the way we do it programmatically opposes any notion of a genealogically developing art (history), proposing instead readings that are aware of forward and backward leaps in art (history). The exhibition subtitle reflects this—rather than turn first to the earliest reference point, Andy Warhol, it begins with one of the youngest artists in the show (at the top of the alphabet): Ei Arakawa.

If one looks back over the history of the artistic appropriation of the images circulating in media space, John Baldessari, Barbara Kruger, Richard Prince, and Martha Rosler are clearly among its chief proponents. All of these artists are either represented in the exhibition by early, historically significant works, or they have produced new works expressly for the occasion. By integrating existing political and pop cultural images into their own work processes, these artists have exercised a powerful influence on the stylistic language of the twentieth century. The exhibition demonstrates that appropriation, modification, and reinterpretation in different processes of pictorial invention are attracting more attention than ever amongst the young generation. Moreover, “technique” in That’s the way we do it is not just a practical term, in the sense of a specific type of production, but also, and above all, involves a social attitude towards artistic production.

When Natascha Sadr Haghighian, Can Altay, and Ashkan Sepahvand, for instance, translate a Persian textbook on art instruction into English for the “institute for incongruous translation,” both cultural and political issues play a major role. Begun for the forthcoming dOCUMENTA (13), the project will receive a preview in Bregenz in a specially developed presentation. The works of Danh Vo, consisting of everyday objects and uniting cultural distinctions and autobiographical aspects in atmospherically dense ensembles, have a similar social charge. As well as photographs (Anne Collier), sculptures and/or installations (Simon Denny, Rachel Harrison, Nora Schultz), the exhibition will include several works on canvas, for whose production, despite their often classical appearance, unconventional techniques were used. They were created using an inkjet printer (Wade Guyton), treated with chocolate (Kelley Walker), or acquired their specific shapes thanks to a complex process of scissor cut, transfer, and rotation (Michael Riedel).
Collages and montages utilizing sometimes utterly heterogeneous elements, and the resulting effect of alienation, are an underlying, cross-generational feature that runs through the entire exhibition. The traditional media are not seldom enriched in the process with new, performative, research-based, and sociocritical approaches. That’s the way we do it concentrates on artists whose works stand out for detailed investigation of the meaning of materials and techniques in relation to social, cultural, and economic questions.