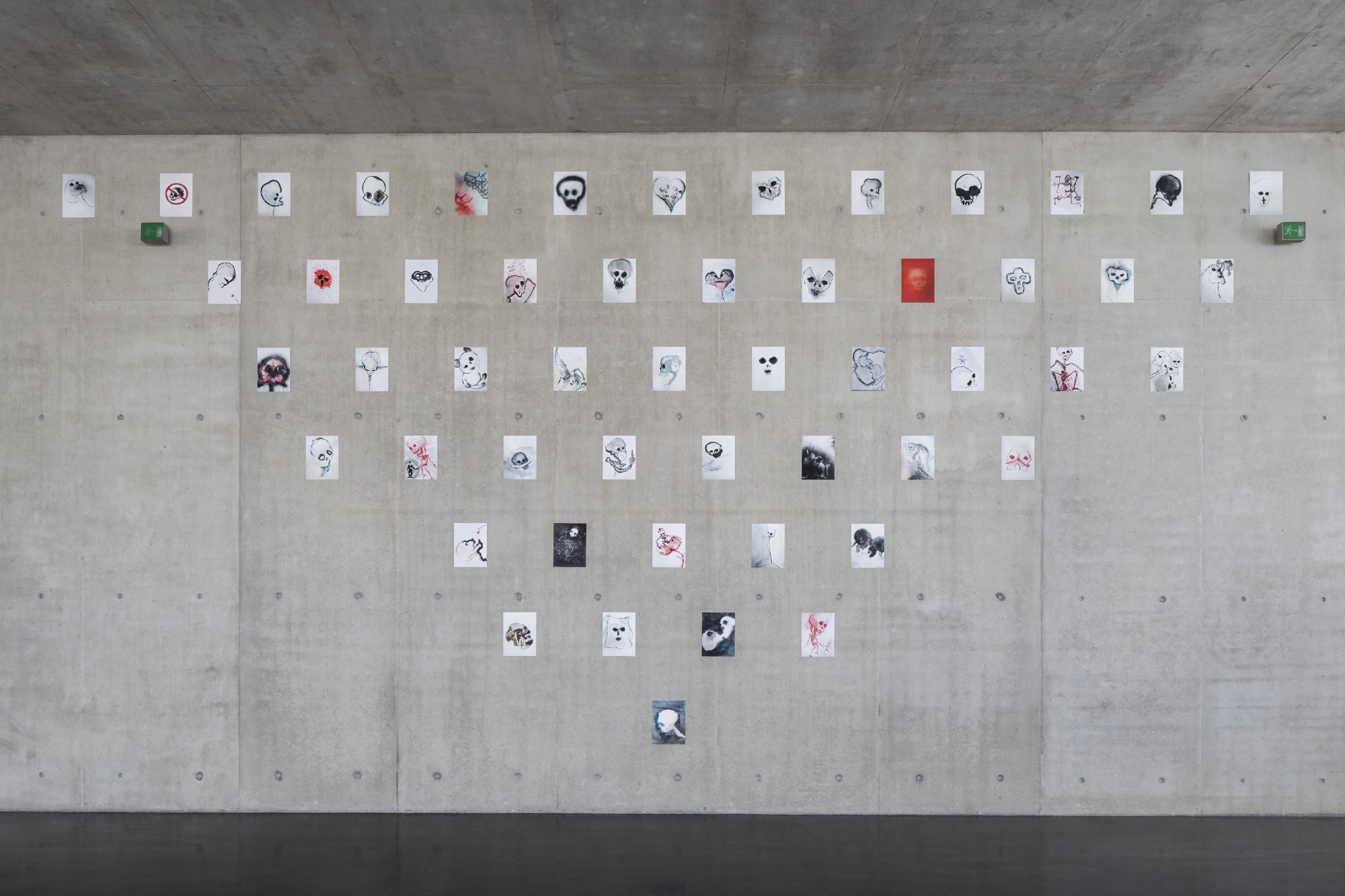 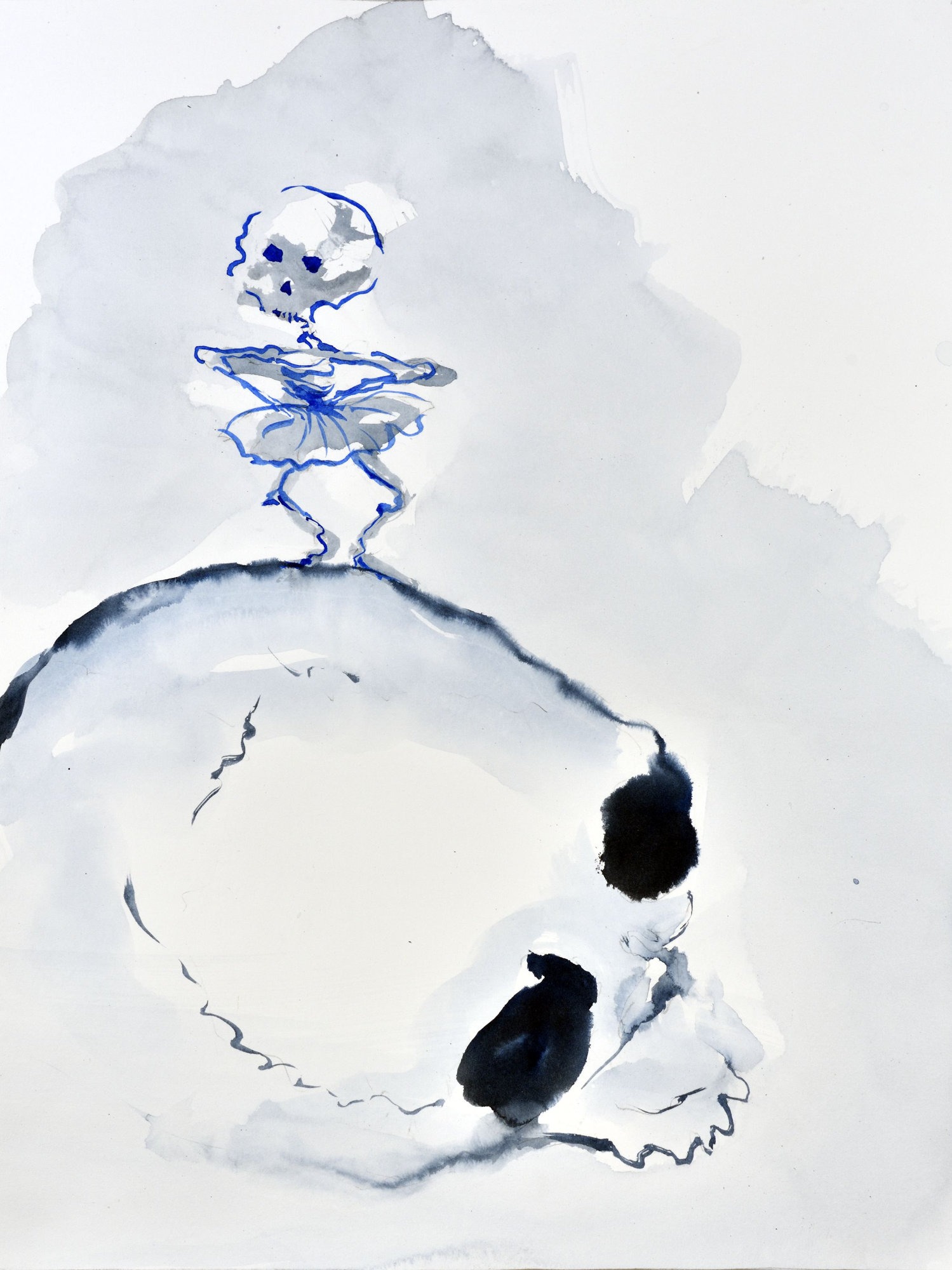 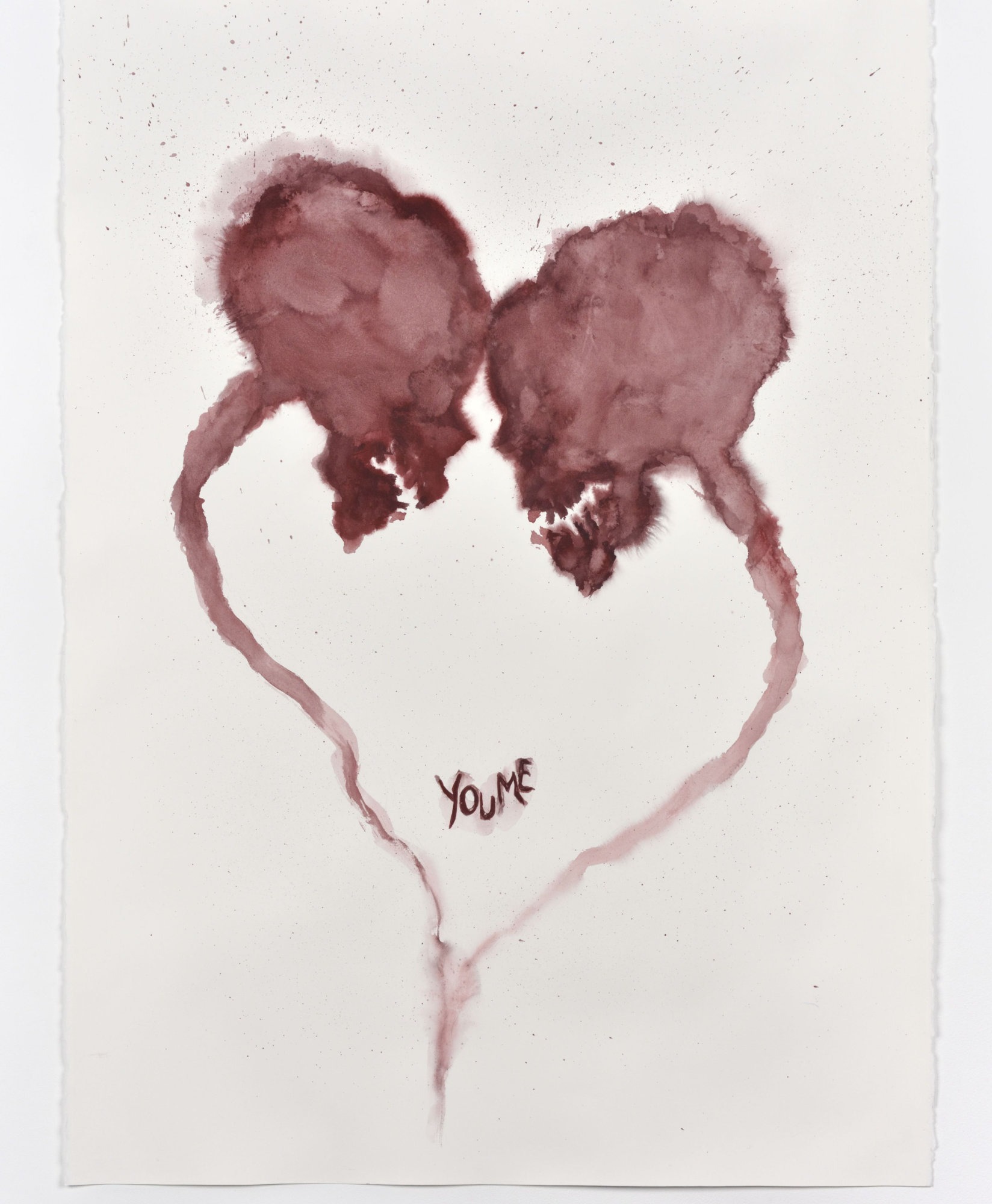 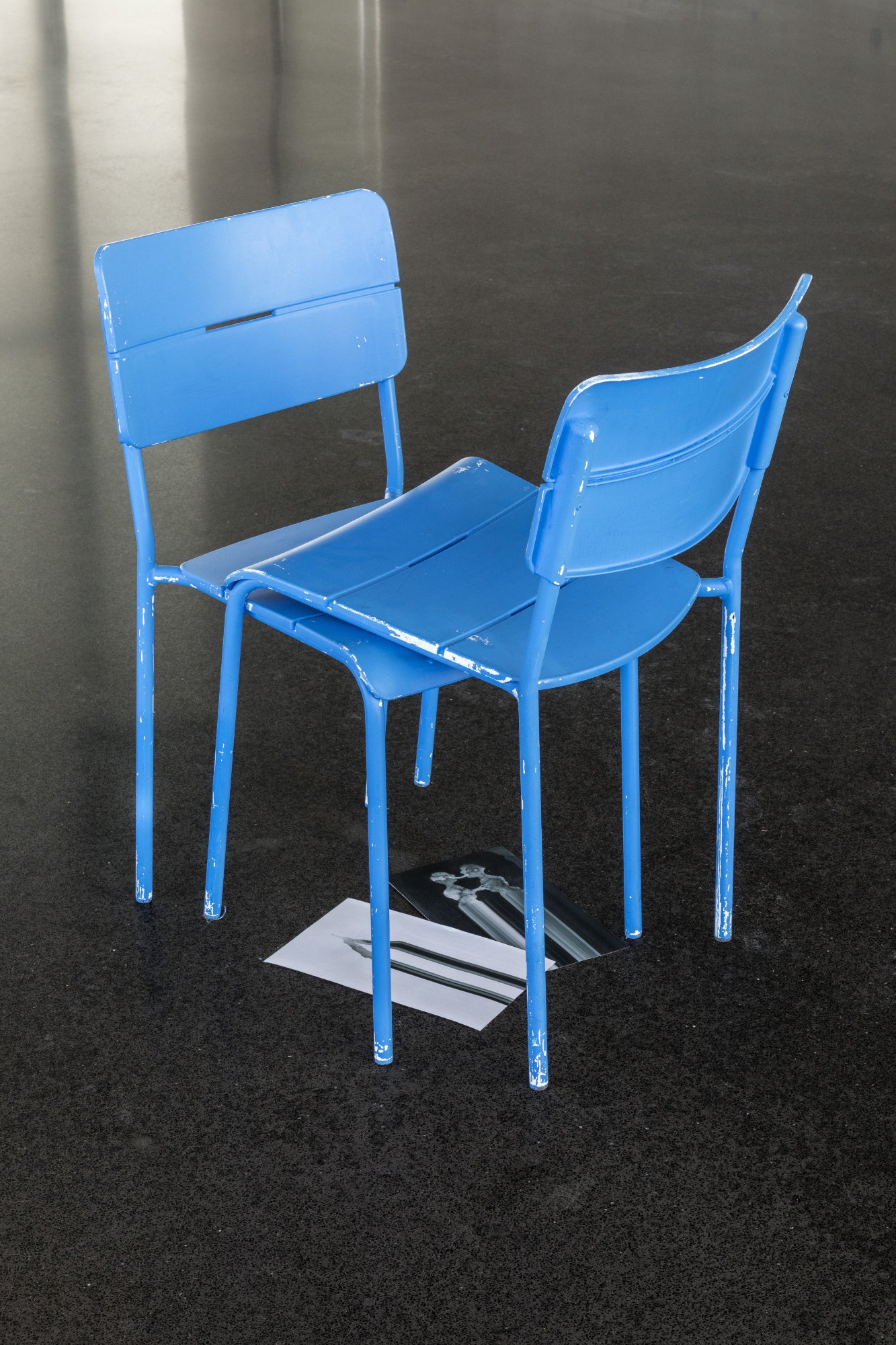 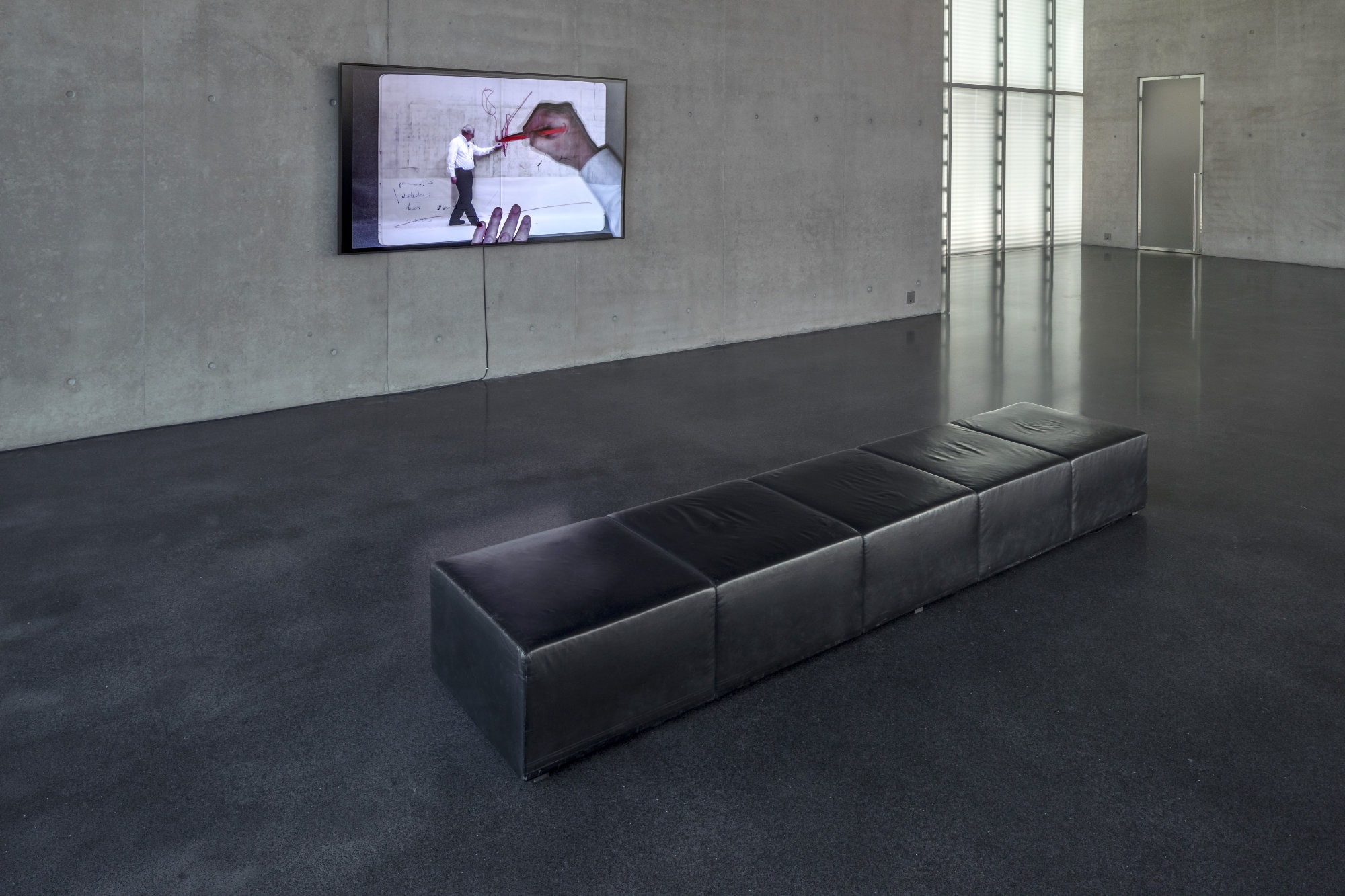 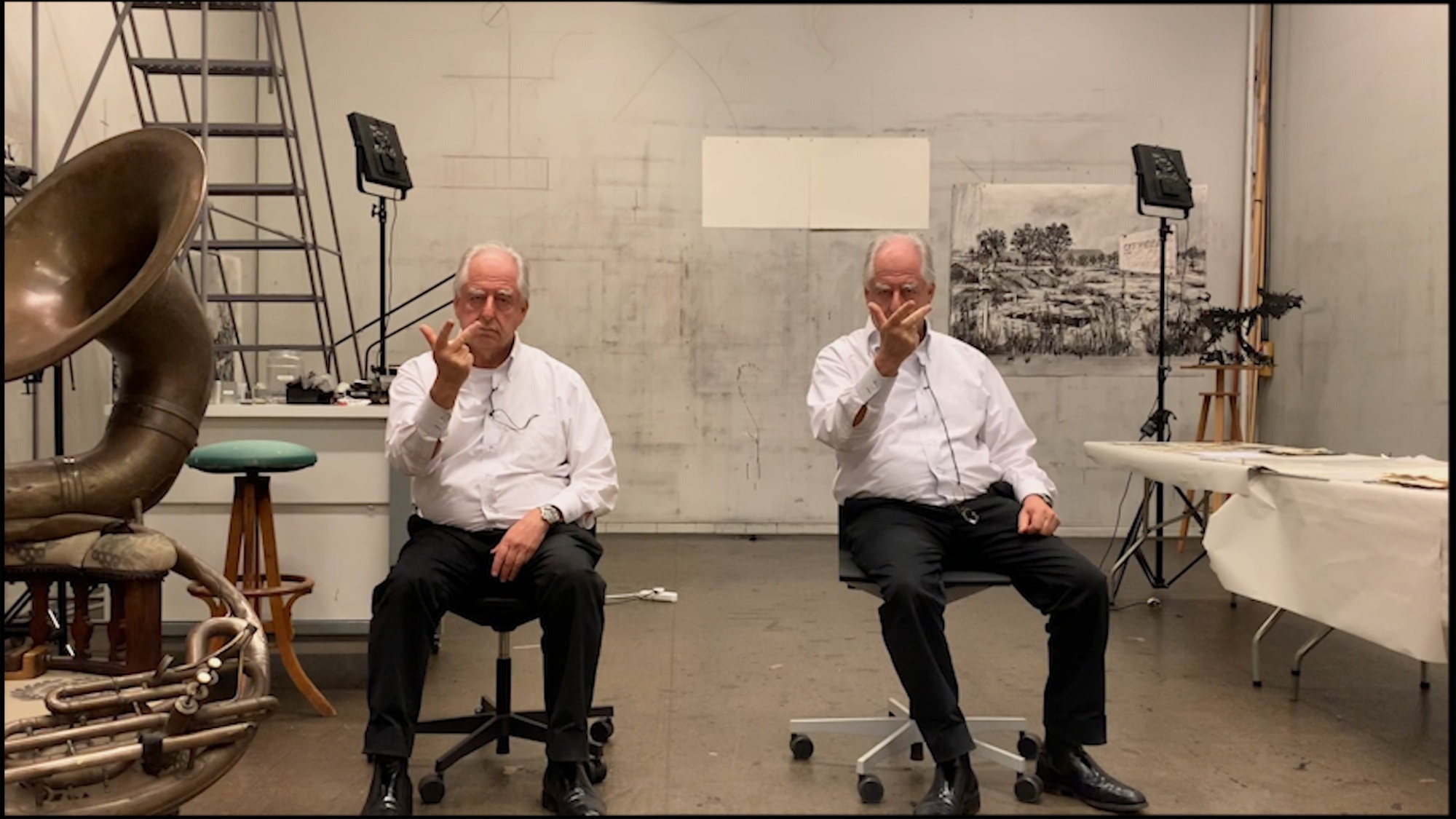 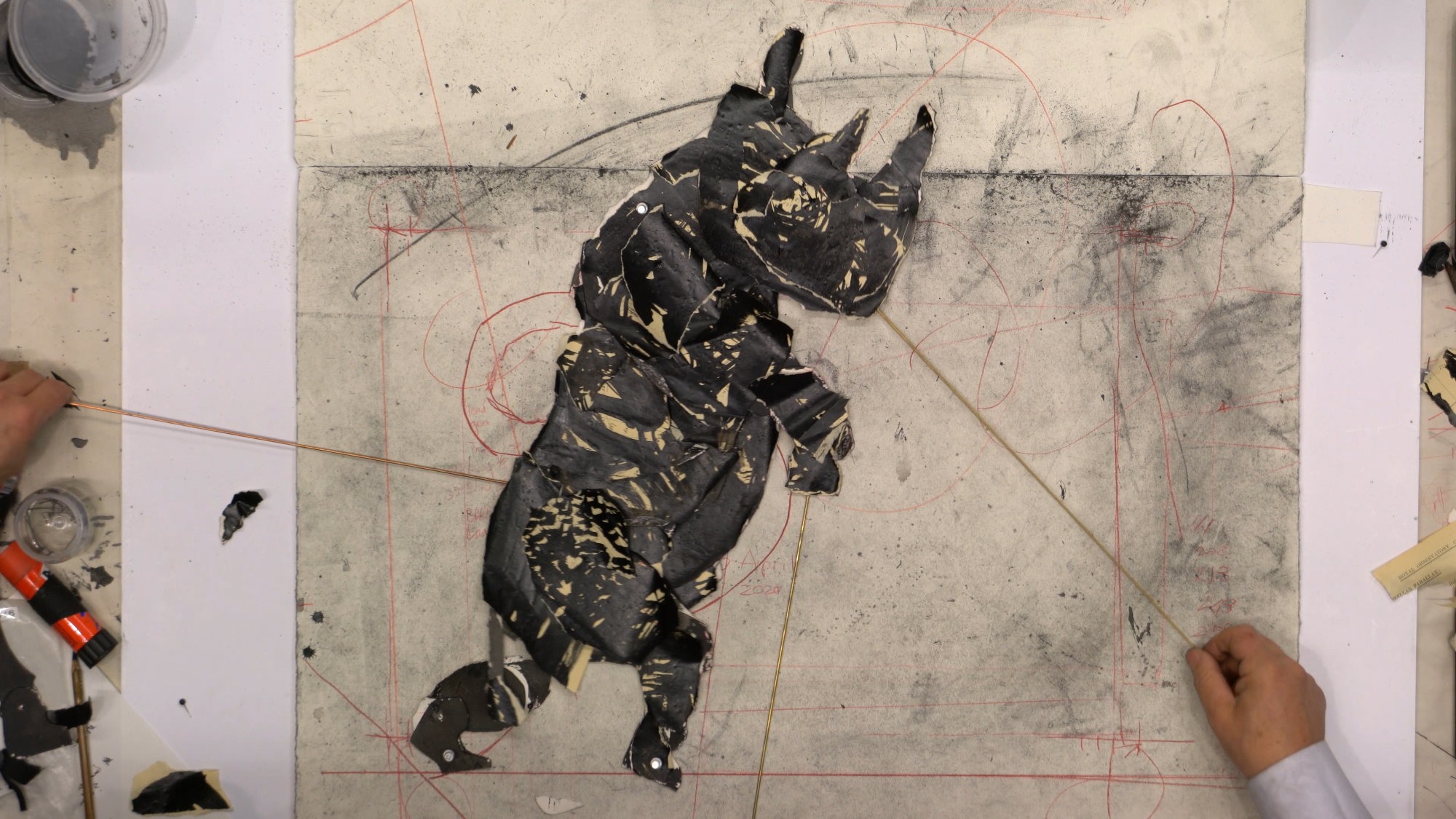 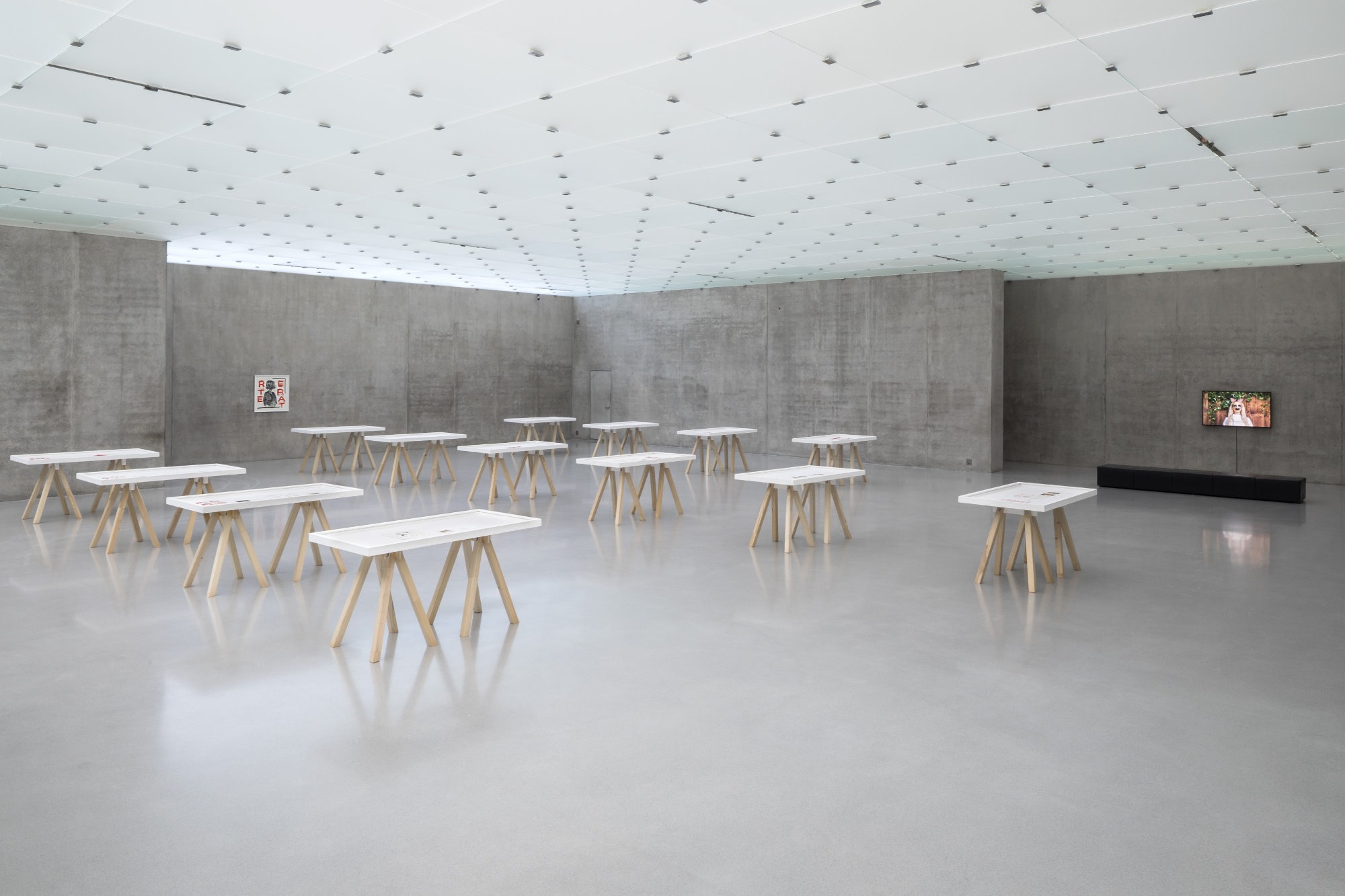 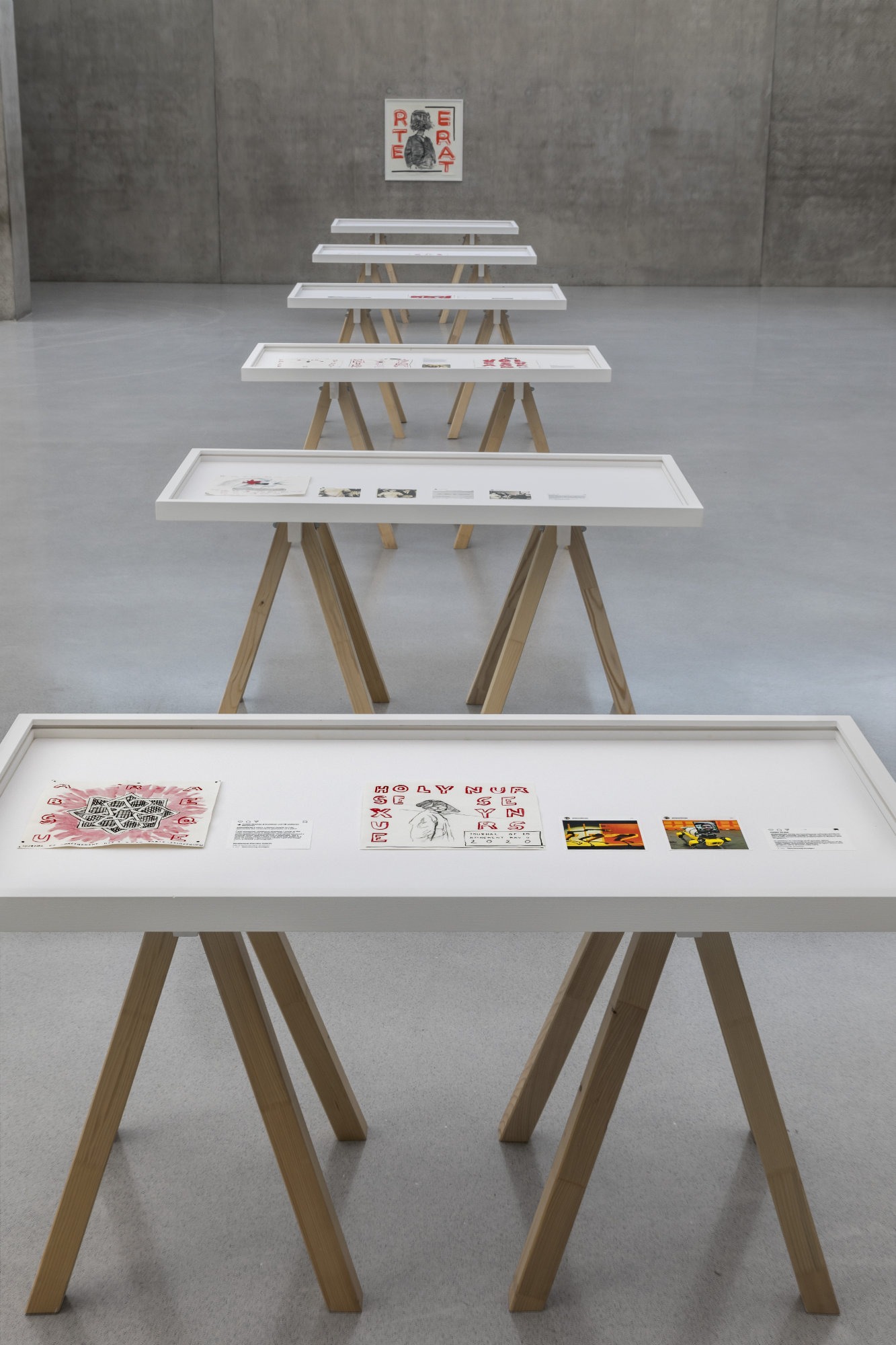 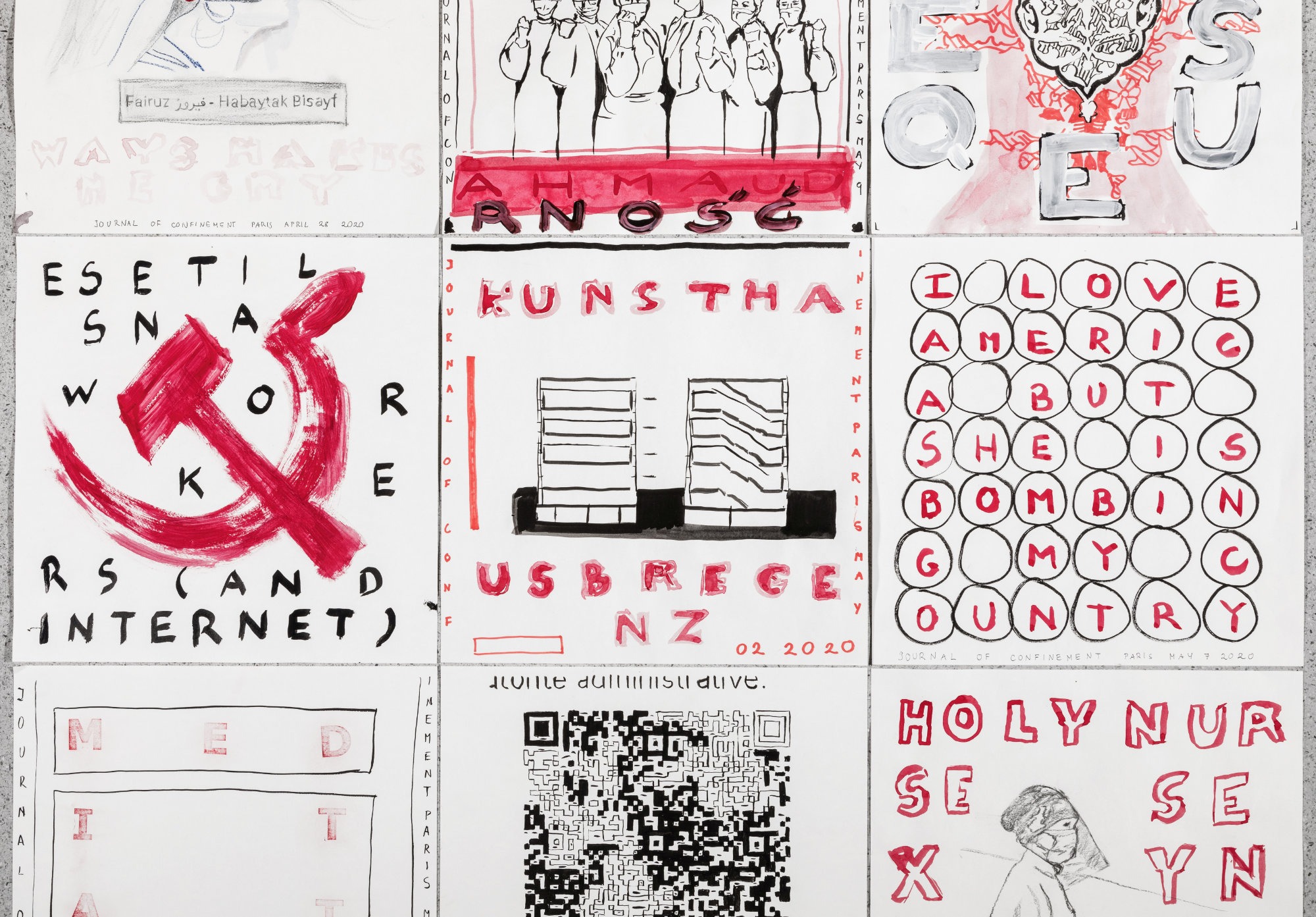 This is art created in the heat of current times. Insights into the existential circumstances of the present await KUB visitors. During the summer weeks, Kunsthaus Bregenz is showing a special exhibition that traces the precariousness of life since the beginning of the corona crisis. It is the sciences that are attempting to offer solutions, but it is the arts that portray the predicaments of the crisis.

Contemporary artists in particular are able to develop a feeling for changing moods, for fear and doubt. They create worlds “in the face of radical disorientation and loss” (according to the US-American philosopher Judith Butler in an interview). Kunsthaus Bregenz is an institution for contemporary art, which is why we are showing an exhibition during this extraordinary situation reflecting the absolute present.

Unprecedented Times assembles works that have either emerged during the crisis or can be read as a premonition of it. There is much at stake: life together, the political community, the economic situation, ethical imperatives, the ego and existence. In view of the radical experience of a world that is very different to what was previously imaginable, there are attempts to withdraw and search for meaning. Some of the works depict silence and intimacy. Others map social consequences, the danger of political alienation, and the loss of democratic rights.

And finally, there are also references to the apocalyptic dimension of the event, the breakdown. Outstanding contemporary artists have accepted a spontaneous invitation from KUB. We are proud to be able to show this exhibition now — as an impression of unprecedented times.

Helen Cammock
What does it mean to be slowed down by the pandemic? In Helen Cammock’s serene observations, it becomes perceptible: views from the window, of the English countryside, groves, forests, backyards, passing cars. Interstitial close-ups – of a sofa blanket, a lamp, two snails, a rusty sculpture, a door lock, and the extractor fan of an air conditioner. The imagery patiently approaches its subjects, close surroundings being cherished but at the same time interrogated. Cammock’s cinematic forays are underlaid with an apparently lyrical voice. Thoughts and song echo, citing Nina Simone, Maya Angelou, and Walter Benjamin. All these impressions are pervaded by deceleration. The titular subject of the film is “idleness,” Cammock guiding us through the emotional states of loneliness and linking them with thoughts concerning work, justice, and exploitation.
Helen Cammock, born in 1970 in Staffordshire, UK, initially worked in social services, whilst also performing as a singer in clubs. Her work has been awarded, among others, the Max Mara Art Prize for Women and last year the renowned Turner Prize. Cammock lives in London.

William Kentridge’s The Centre for the Less Good Idea
William Kentridge became well-known during the 1990s for his black-and-white stop-motion films. They originate in drawings made with black charcoal and revised multiple times. They center on South African society post colonization, oppression, exclusion, and flight from such injustices. Despite the subject matter, his works also possess humorous and comical features. During the lockdown, Kentridge has been making short, one-minute films. They are poetic-surreal miniatures from the studio. Kentridge also acts as a mentor to other art projects: he founded The Centre for the Less Good Idea in Johannesburg, which presents performance, music, and theater events. A series of events planned for April 2020 had to be canceled due to the spread of the coronavirus. The artists originally invited to participate were instead asked to submit digital contributions. Bronwyn Lace, the director of the Centre, assembled some of the one-minute pieces into a diverse Instagram thread. At Kunsthaus Bregenz it is being shown for the first time in the form of a film, 29 Long Minutes.
William Kentridge, born in 1955 in Johannesburg, South Africa, creates work drawing on the social and political circumstances following the end of apartheid. In 1992 he founded the Handspring Puppet Company, and later directed operas. He has shown his films at the Venice Biennale and on several occasions at documenta. Kentridge lives in Johannesburg.

Annette Messager
In the 1980s, Annette Messager created installations that she called “chimeras,” comprising oversized everyday objects, photographs of distorted parts of the body, and grotesque creatures. Messager subsequently exhibited photographs of sections of her own body at various scales, which she painted over or impaled. In addition, she combined soft toys and suspended nets. The assemblages have the appearance of abysmal votive tableaux, wounded landscapes, or eerie fantasies. In recent years, Messager has expanded on her exploration of the body. The animal and human are sewn into hybrid beings. The series of watercolors she has been creating since the beginning of the corona crisis is macabre. They are a response to an operation on her head in October 2019 and depict skulls: every single one of these images is terrifying, and yet possesses a sublime beauty and intimate sensitivity.
Annette Messager, born 1943 in Berck-sur-Mer, France, combines differing forms of expression and various materials in her work, addressing the role of women. Among other awards, she has won the Golden Lion at the Venice Biennale in 2005 as well as the Praemium Imperiale in 2016. Messager lives in Paris.

Rabih Mroué
Rabih Mroué transcends borders. His work operates between visual art, theater, and academic lectures. In his “lecture performances” he has commented on images from areas of conflict including the Arab world. Mroué is interested in how imagery constructs narratives. Such a concern is likewise present in Chalk Outlines, which depicts the outlines of human figures in white chalk on a black background. The imagery rapidly changes, rendering the figures individually, drifting, and twitching. They would appear inscribed and shadowy, evoking etchings, graffiti, and damaged negatives. Whether the figures being depicted are asleep or whether they are outlines from an investigation at a crime scene remains open. It is only an inserted text that suggests it is, in fact, a self-portrait during times of isolation.
Rabih Mroué, born in 1967 in Beirut, Lebanon, is an author, director, performance and visual artist. In his work, he addresses the social and cultural impact of conflicts. Mroué’s work has been shown at, among others, MoMA, New York; Tate Modern, London; Centre Pompidou, Paris; and in 2012 at dOCUMENTA (13). He lives in Berlin.

Markus Schinwald
Markus Schinwald has witnessed the Covid-19 pandemic in the USA, where he teaches at Yale University. As early as the 1990s, Schinwald was creating a series of re-workings of historical paintings, portraits from the Biedermeier period and the late 19th century, which he had acquired for such a purpose. He modified the figures portrayed, adding ailments, physical impairments, and disabilities. To such ends, Schinwald manipulated the faces employing methods used in restoration, he added glasses, braces, and disturbing medical aids. Among the items are also masks, as currently prescribed for public spaces. These works, inventions of surreal imagination created long before the corona crisis emerged, appear today as documents of astonishing premonition.
Markus Schinwald, born in 1973 in Salzburg, works in painting, sculpture, video, and theater. His work always conveys a mysterious and unsettling atmosphere. He has been shown at, among others, the Scottish National Gallery of Modern Art, Edinburgh; Tate Modern, London; and already in 2009 at KUB in a solo exhibition. In 2011 Schinwald represented Austria at the Venice Biennale. Schinwald lives in Vienna and New Haven, Connecticut, USA.

Marianna Simnett
Marianna Simnett uses vivid and visceral means to explore the body as a site of transformation. Kunsthaus Bregenz will present two works by the artist, created during the global lockdown.
Tito’s Dog (2020), continues Simnett’s investigation of interspecies relationships whilst confronting her own identity. Using makeup and prosthetics and slipping between Croatian and English, she transitions from human to German Shepherd, telling a story of survival and animal suicide.
Dance, Stanley, Dance (2020) is inspired by found roadkill. A dead squirrel is reanimated through watercolour, twisting and pulsating along to Simnett’s breath through a flute. Music by Daniel Blumberg.
Marianna Simnett's interdisciplinary practice includes video, installation, performance, sculpture, drawing and watercolour. Working with animals, children, organs, and often performing herself, she imagines radical new worlds filled with untamed thoughts, strange tales, and desires. Her work has been exhibited at, among others, Kunsthalle Zürich; Museum für Moderne Kunst, Frankfurt, and New Museum, New York. Simnett lives in London.

Ania Soliman
Ania Soliman explores the relations between human life, nature, and technology. To this end, she pursues vestiges of both the real and imaginary. Since the beginning of the current crisis, Soliman has been developing a series of Instagram posts. It is a project addressing intimacy, memory, and the technologies of communication, says Ania Soliman in describing her work. The original works are on display at Kunsthaus Bregenz. These comprise square drawings on paper, each bearing a date and featuring a motif in the center surrounded by text in red lettering. There are visual references to digital screens, computer commands, program instructions, and sometimes also political symbols and flags. This online diary in drawings concerns a search for meaning and an introspection: what are our responsibilities in the age of digital networking and forces of external determination?
Egyptian artist Ania Soliman, born in 1970, pursues processes of translation between different cultures in her artistic practice. Her work has been shown at, among others, the Istanbul Biennale; Castello di Rivoli, Turin; Museum der Moderne Salzburg; and Museum der Kulturen Basel. Soliman lives in Paris.
www.kunsthaus-bregenz.at