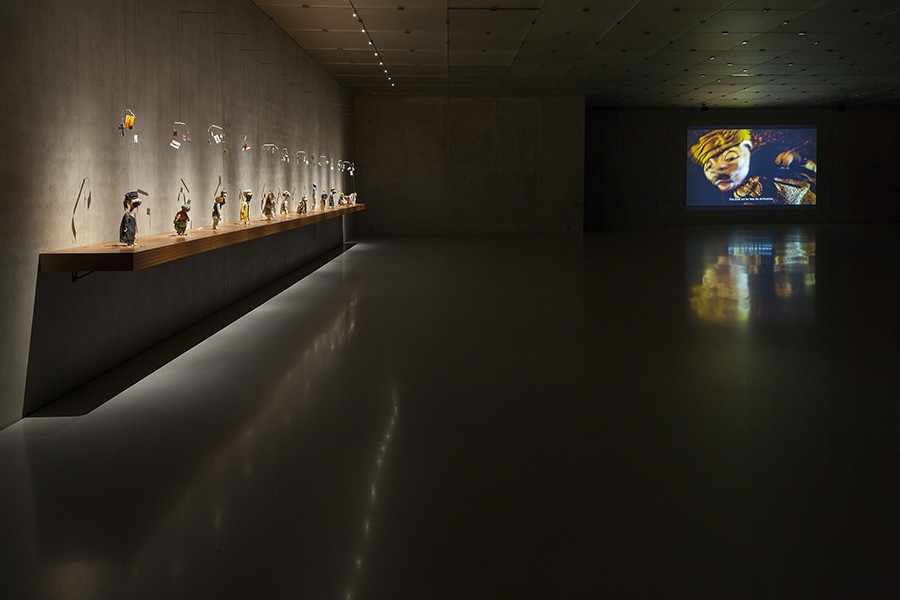 The foreign and the other are currently topics of fierce discussion. The Egyptian artist Wael Shawky (born 1971) uses his filming of puppet theater to tell the story of the Crusades. In his film trilogy Cabaret Crusades, based on a book by the French-Lebanese writer Amin Maalouf, the story of the war is told from an Arab perspective. The puppets are clad in sumptuously oriental clothing, their heads evoking molten crystal rocks or honey-colored amber, which Shawky has had fabricated from Murano glass.

Two parts of the Cabaret Crusades trilogy are being screened in Bregenz: part three, Secrets of Karbala, tells the story of the second (1147 — 1149) and third (1189 — 1192) Crusades, which finally ended in 1204 with the destruction of Constantinople. Pope Innocent III had called for the conquest of the Holy Land, using the Venetian fleet. However, the enterprise faltered in the Adriatic, as the negotiated sum had not been paid, the Christian army then looting Zadar in order to generate funds. Christians murdered Christians in order to subsequently murder Muslims.

Whether Saladin or Richard the Lionheart, the Frankish kings or the Muslim leaders, there are no heroes. The earthen architecture on a revolving stage creates cinematic movement whilst also symbolizing the world as a flat disk. The scenes are accompanied by a compilation of the songs of Arabian pearl fishers and Egyptian electronic music. The second part of the trilogy, The Path to Cairo (2012), features handmade ceramic creatures.

On the upper floor of Kunsthaus Bregenz four glass panels are on display in which a historical map from the Orient has been cut. Adjacently a kind of flying object is both a metaphor for the 9/11 attacks and the Hajj pilgrimage to Mecca. In the same space a flag has been spread on the floor. A second hangs over the façade of KUB, itself a pale green Kaaba, announcing the exhibition in the form of a symbol of victory enveloping the chain mail façade.

Shawky has received many awards for his work, including the Mario Merz Prize (2015, together with Cyrill Schürch), the Sharjah Biennial Award 2013 for an exceptional contribution, the »Award for the Filmic Oeuvre« created by Luis Vuitton and Kino der Kunst (2013), the Abraaj Capital Art Prize, joint winner (2012); Kunstpreis der Schering Stiftung (2011), as well as the Grand Prize, 25th Alexandria Biennale, Alexandria (2009). In 2011 he was an artist in residence at The Center for Possible Studies, Serpentine Gallery, London.

Wael Shawky lives and works in Alexandria, Egypt, and is the founder of MASS Alexandria, a studio program for young artists.
www.kunsthaus-bregenz.at