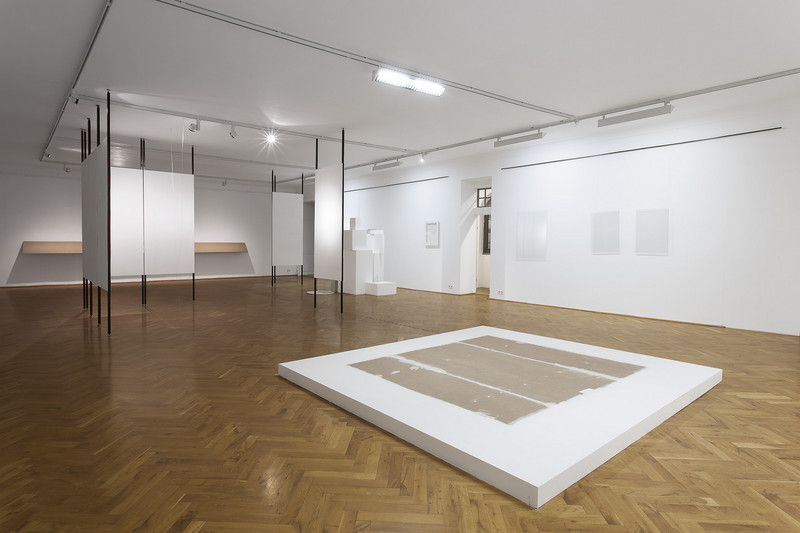 In “Humble Objects”, Dominik Lang asks what art was, what it is, and what it can be. He employs the body of work of his late father, Jiří Lang, as a starting point of his investigation. Jiří Lang was a Czech sculptor, who died when his son was still a teenager. He left behind an artist’s studio of finished and unfinished sculptures, which have never been shown in public. Dominik describes his father’s collection as “a life’s work, concealing considerable effort, time, and pleasure shrunk to a forgotten archive; a dusty depository.” His father’s studio became a place of memory, of transformation, and of creation: a meeting-place of past, present and future.

For a long period of time, artists’ studios were treated as private rooms, where artists completed their works removed from public view. In the course of the nineteenth-century, the studio grew into a place where creative synergies were materialized and exchanged, and where artistic genius was celebrated. Only recently has post-studio-production brought forth a more critical investigation of established artistic production, and in the process influenced our impression of the artist.

In the essay “Fonction de l’atelier”, published in 1971, French artist Daniel Buren expressed his distrust in the studio and it’s concurrently “idealizing and fossil function”. To demystify the artistic process, and to avoid the uprooting of artworks, Buren recommended to end the practice of spatially separating production and presentation of artworks.

In the course of this transformation, the exhibition room itself became an object of contemplation. As the artist Robert Morris wrote in “Notes on Sculptures” in 1966, “the space of the room itself is a structuring factor both in its cubic shape and in terms of the kinds of compressions different sized and proportioned rooms can effect upon the subject-object terms.”

In Dominik Lang’s exhibition, curated by Petra Reichensperger, the artist also focuses on the performative act of making artworks visible in the exhibition space. Whilst he often referred to his father’s oeuvre in former works, he now works off pieces by different Czechoslovakian artists, which are all from his father’s generation.

The elements Dominik Lang built refer to works from artists like Maria Bartuszová, Hugo Demartini, Milan Grygar, Eva Kmentová, Běla Kolářová, Stanislav Kolíbal, Karel Malich und Jiří Novák. All of them were active from the 1950ies to now. In opposition to the officially accepted and state supported art, they produced avantgardistic and abstract works. At the time they were if at all exhibited in niche-spaces. Only today they are slowly finding their way into museum exhibitions and collections. They do not only play a fundamental role in the exhibition concept, “Humble Objects” is also the first time their work is brought together in this constellation.

Dominik Lang built plinths, walls and fixtures for them, thus unpretentiously making things, which are often perceived as self-evident, the centre of attention. Doing so the artist raises questions on the status of these often subordinate objects: Do they have their own identity or are they dependent on superior objects? Do they become art objects, when they are exhibited in the gallery space?

Through newly produced works, conceived specifically for Kunsthaus Dresden, the artist puts spatial as well as temporal perceptions of art to the test. Lang’s treatment of the present invokes Henri Bergson’s description of the present in “Matière et Mémoire“ (1896) as both “a perception of the immediate past and a determination of the immediate future.” The moment of production and the moment of presentation are both fundamental to “Humble Objects”.

The emerging theatricality is captured by Judith Butler’s description of the performative act “that evokes or stages what it names, thus underlining the constitutive or productive power of speech.” Arranging an evincible setting is insofar comparable with Butler’s notion of “power of speech” as it follows the rhetoric of power, which defines what art is, and what it is not (yet) or not anymore. Lang questions this logic by investigating the conditions of art’s visibility and display anew.

In the context of her research project “Curating Architecture” (2006 - 2008), Andrea Phillips points out how exhibitions also follow a contextualized, process-based presentation of art and artefacts, and are subject to the social, economic, and juridical conditions of the exhibiting space. To expand the social relevance of contemporary art thus requires a critical investigation of the built environment. In “Humble Objects”, Dominik Lang presents and challenges us with such an investigation.
www.kunsthausdresden.de