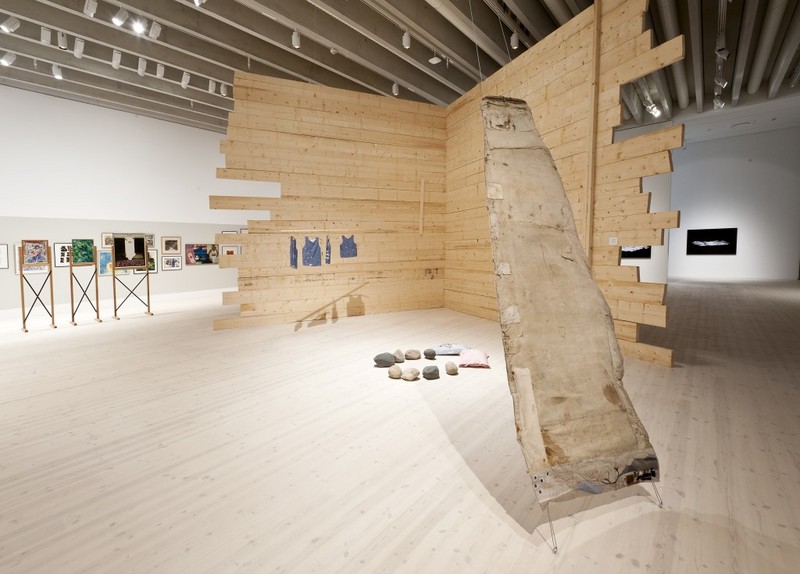 Lara Almarcegui (Rotterdam), Agneta Andersson (Kiruna), Jürgen Bergbauer (Straubing), Dave Hullfish Bailey (Los Angeles), Haifische Dresden Süd-West (Susanne Hampe, Birgit Schuh, Lisa Stagge, Christoph Rodde), Klara Hobza (Berlin), Geir Tore Holm und Sossa Jørgensen (Skiptvet), Lina Issa (Amsterdam), Matthias Jackisch (Dresden-Bannewitz), Ingela Johansson (Stockholm), Gerda Lepke (Gera/Dresden), Britta Marakatt-Labba (Övre Soppero), Jürgen Matschie (Bautzen), Heide Nord (Leipzig), Barbara Raetsch (Potsdam), Grit Ruhland (Dresden, Weimar), Götz Schlötke (Dresden,†), Boris Sieverts (Köln), Ingo Vetter (Bremen), Liselotte Wajstedt (Kiruna), Florian Zeyfang (Berlin)
Like almost no other genre, historical landscape painting with its formal visual decisions has until today determined the concept of the landscape in various disciplines, in literature, geography, landscape planning, or the more recent environmental sciences.
How do contemporary artists engage with this subject, and how can art respond to today’s industrial and postindustrial landscapes?
Kiruna, a town in the far north of Sweden that was founded in the wake of iron ore mining, is the starting point of this artistic research and exhibition project. At the end of the 19th century, the mining settlement was built on the historical grounds of the Sami, the seminomadic indigenous population of this region. The town and its surrounding landscape are an exemplary site revealing the impact of industrialization, national economic interests, and early globalization caused by the worldwide demand for iron ore. Today, the mine has penetrated so far beneath the town that cracks are forming on the ground and the subsurface is becoming instable. Due to this instability—and the enduringly high iron ore prices on the world markets—the southeastern half and the center of the town will be relocated five kilometers away.
These far-reaching and long-term changes in the landscape are accompanied by considerations weighing the production of raw material against a sustainable quality of life, while also raising questions pertaining to democracy and the participation of the affected population. Such questions link the iron-ore region of Kiruna with numerous still active or now inoperative industrial landscapes worldwide, including the brown coal mining districts in Lusatia that have been controversially debated since the 1970s.
What artistic, cultural and political meanings does the term “landscape” have for us today? In 2012, the Goethe-Institut Stockholm, in cooperation with the cultural department of the City of Kiruna, the Bildmuseet Umeå, the University of Umeå, and the Konsthall C/Stockholm, initiated an international Artist-in-Residence Program to let artists observe and reflect upon the social, urban and landscape-related changes on site. In cooperation with the Kunsthaus Dresden, this artistic research will be continued. With newly produced artworks and loans from the collection of the Kunstfonds/Staatliche Kunstsammlungen Dresden, the expanded exhibition Kirunatopia at the Kunsthaus Dresden again takes up the often controversial debate on the relationship between art, (post)industrial landscape, resources, and democracy. A further issue is the historical relationship to affected cultural minorities—in this case the Sorbs in Lusatia.
The exhibition is supplemented by LAKOMA – Archive of Lusatia that includes documentary material on opencast mining, the vanished places in Lusatia and historical protests and was compiled by Torsten Birne and Claudia Reichardt.
The Mobile Landscape Studio (Mobiles Landschaftsatelier) is a workshop offered dedicated to art, landscape and resources to schools in the region, developed on the occasion of the Kirunatopia project in collaboration with the BildungsCent e. V. as part of the education program KlimaKunstSchule!. The artists Susanne Keichel, Ina Kwon, Christoph Rodde, Grit Ruhland, and Birgit Schuh offer workshops for schools by using the artistic working unit designed by the Berlin based artist Lucio Auri.