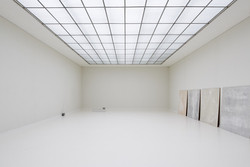 In an age where all channels are broadcasting non-stop around the clock, the programming pause has become the exception. Gaps between channels, where sounds of static once marked the transition between shows or the end of the broadcasting day, are only rarely heard in the digital world. In today’s world of input and image overload, monotonous noise has even become a concept for serenity, silence, and emptiness. Downloadable white noise tracks promise better sleep, greater stress relief, and optimized concentration. In open space offices pink noise regulates disparate sounds, creating an atmosphere that is simultaneously serene and stimulating. Other colored noise tonalities, such as blue, green, gray, brown, and red noise, are audio concepts that are seen as having a comparable spectrum of varying qualities and influences on mental and visual perception in their referencing of colored light. Noise is characterized here as a chaotic superimposition of all frequencies into a neutral and primarily monotone ambient soundscape. Noise is generated in all frequency ranges, not just in the realm of sound, but also in light. It is a concept for both nothingness and an overwhelming everything – complete emptiness and absolute fullness at the same time.

In the history of art, the theme of the void, presented, for example, as a white canvas or as a piece of music absent of sound, has a long tradition. Countless concepts of religion, philosophy, mathematics, and the natural sciences have also sprung up around notions of the void and nothingness. In the process, absolute nothingness, the void, has remained a theoretical phenomenon. Most people equate the void with a lack of identifiable structures. To some extent, the void is created in the eye of the observer and in the ear of the listener. Here, where only a few places remain for the mind to affix to, the imagination fills up the vacuum.

This exhibition brings together artists who are interested in the invisible, the latent, and what cannot be depicted. Employing a wide range of means and approaches they reference the phenomenon of white noise. For them, this is partly about reduction and partly about doing away with the limits of form and content. They experiment with sound and color as well as soundlessness and non-color and they and incorporate electrical, acoustic, and imaginary energies. In multiple works, architecture and the exhibition space, the White Cube, play important roles as a neutral, ideal setting for the presentation of art as well as a space for reflection and feedback, or they address the mechanisms of control and the creative repurposing thereof in an age of omnipresent background noise and image overload.
www.kunsthausglarus.ch