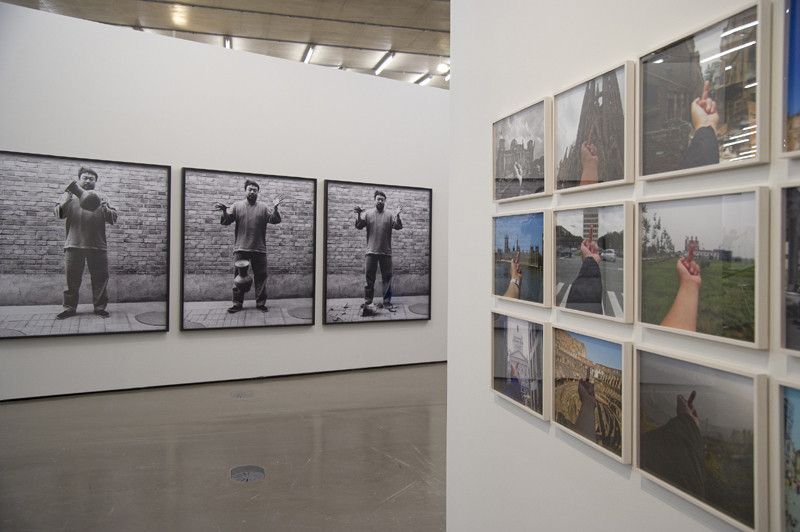 The first large-scale exhibition of Ai Weiwei’s photographic and video work—taken over from the Fotomuseum Winterthur—puts the spotlight on Ai Weiwei the communicator and indefatigable remembrancer, the documenting, analysing, interlacing and multichannel-communicating artist. Even in his New York period (1983–1993), Ai Weiwei took photographs, but especially since his return to Beijing, he has tirelessly documented everyday realities of the urban environment and society in China, and discussed them in blogs and twitters. The photographs of the radical changes to the urban built fabric, the search for earthquake victims, and the destruction of his Shanghai studio are presented along with art-photographic projects, the documenta Fairytale project, the countless blog and mobile-phone photographs. The exhibition is accompanied by an extensive book of material and archives.

Ai Weiwei is a generalistic, conceptual, socio-critical artist, dedicated to friction with and the design of realities. As an architect, conceptual artist, sculptor, photographer, blogger, Twitterer and interview artist and political activist, he is a seismograph for current themes and social problems: a great multiplicator and communicator, who leads a life for art and art as life.
Ai Weiwei deliberately tackles social relationships in China and the world—by means of photographic documentation of the architectural demolitions in Beijing in the name of progress, with provocative-looking measurements of the world, his personal determinations of location in Study of Perspective (radical editing of the past, splitting up and reassembling found bits of furniture) in order to create possibilities for the present and future, and with his 10,000s of blogs, blog and mobile-phone photographs, along with many other artistic opinions). This first major exhibition and book project of his photography and video works aims to throw light on this diversity and multifaced, interlaced work by Ai Weiwei and thematise it with hundreds of his photographs, blogs and explanatory essays.
The artist as a network, firm, activist, political voice, social vessel or agent provocateur. At all times, every society in this world, in the past, present and future, needs singular, outstanding figures such as Ai Weiwei in order to remain alert and be shaken into wakefulness, to recognise its own rigidity and to avoid its own tunnel vision. We are delighted that this great thinker, designer and warrior was released from arrest on 22nd June 2011. It is to be hoped that Ai Weiwei will soon leave behind the restrictions imposed on him and can come forward again as a powerful public voice.
The exhibition was organised by the Fotomuseum Winterthur in close cooperation with Ai Weiwei and his assistant Lucas Lai. Prior to the Kunsthaus Graz, it was shown at the Fotomuseum Winterthur (28th May-21st Aug. 2011). From 21st Feb. to 29th April 2102, it will be on show at the Jeu de Paume in Paris.

Ai Weiwei was born in 1957, the son of poet Ai Qing. After studying at the Beijing Film Academy, in 1978 he and others founded The Stars artist collective, which rebelled against Socialistic Realism and came out in favour of artistic individuality and experimenting in art. In 1981, Ai Weiwei went to the USA, and in 1983 to New York, where he studied under painter Sean Scully at the Parsons School of Design. In New York, he discovered artists such as Allen Ginsberg, Jasper Johns, Andy Warhol and above all Marcel Duchamp. Duchamp was important to him because he saw art as a part of life. The result was his first ready-mades and thousands of photographs documenting his stay and those of his Chinese artist friends in New York. When his father fell ill, Ai Weiwei returned to Beijing in 1993. In 1997, he co-founded the China Art Archives and Warehouse (CAAW) and began to take an interest in architecture. In 1999, he opened a studio of his own in Caochangdi, and in 2003 founded the FAKE Design architecture studio. The same year, he was substantially involved with Swiss architects Herzog & de Meuron in the construction of the Olympic Stadium, the so-called Bird’s Nest, which after its completion became the new emblem of Beijing. In 2007, at his prompting, 1001 Chinese travelled to Kassel for documenta 12 (Fairytale). In 2010, he astonished the world with his large, formally Minimalist-arranged carpet at the Tate Modern, made of millions of sunflower seeds made of hand-painted porcelain.
www.kunsthausgraz.at