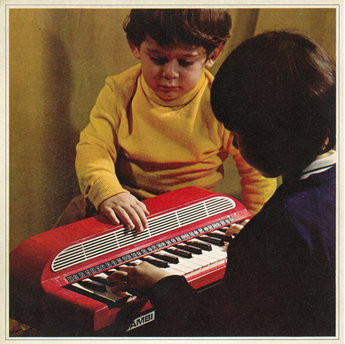 The sculptures, gouaches, embroideries, photographs and installations by Enrico David (*1966 in Ancona, lives and works in London) feature a broad spectrum of cultural reference systems. Among others, these include Arte Povera, assemblage, set design and graphic art motifs from the 1920s and 30s, as well as numerous literary sources and elements from craft tradition. The works are characterised by enigmatic representations of the body, which are distorted or broken down into fragments, expressing the impossibility of a bodily unity. Different elements coalesce into a remnant – a head, limb, or indeterminate swelling.

The current exhibition circles around just a few elements. At the beginning and end are two photographs that, if considered as two halves, can only unravel with some difficulty. The first shows two small boys occupied with a piano. The facial expression of one of them seems discontented, his gesture forced. It is the artist himself, who at the age of three posed as a model for toy instrument advertisements. The second photograph, a strangely ingratiating portrait of a man, stands in stark contrast to the corporeal children pictures. The grotesque display of masculinity, with the unambiguous function of seduction, is repeated with a slightly altered facial expression in another photograph. They come from a mail-order catalogue for sex implements and stand for a certain artificially exaggerated type that can be exchanged at whim.

These two pictures provide the overlay for two larger-than-life balancing figures in wood, wire and paper, whose form is borrowed from a toy design by Koloman Moser for the Wiener Werkstätte from the 1910s. The knobby egg shapes – torso, head and arms merge into a single form – stand on two thin wooden bowlegs and runners. They comprise the center of the exhibition, surrounded by freestanding partition walls, on which the man’s faces appear again as large-format mounted pictures. The motifs in the publication that accompanies the exhibition are treated the same way, allowing the pages of the book to be read in parallel to the three-dimensional installation in space.

How Do You Love Dzzzzt by Mammy? refers to the ineffable, to a lack of clarity and an uncertainty that is encountered all through life. When Enrico David is asked about the meaning of the title, he replies that the question about the meaning is what the title is about. "Bit by bit, life robs you of certainty. There can never be any fixed path" (E. David).

A second installation presents itself as a kind of diorama, a playhouse that exploits the effect of trompe-l’oeil. We are spectators at a scene based on the Surrealist photo collage vielle femme et enfant (ca. 1935) by Dora Maar. The original picture shows a panelled room, the floor covered with mud, and a boy rubbing up against a woman. David reconstructs the space in its main features, but combines these with very personal materials, based on the bedroom that his father designed for him in the 1970s. The figures in the background have been exchanged for depictions of a wooden doll and the artist himself.

Enrico David moved to London in the late 1980s, where he studied at St. Martin’s School of Art. Last year, a comprehensive individual exhibition was presented at the ICA London. Along with the exhibition How Do You Love Dzzzzt by Mammy? A museum brochure is to be published with texts by Manfred Hermes and Darian Leader (German / English).