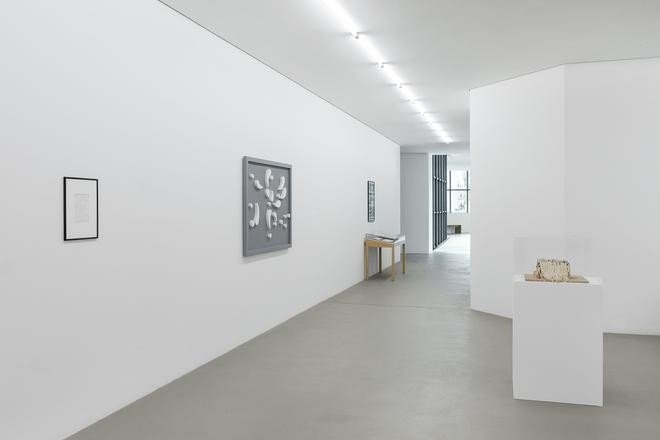 Exactly forty years ago, in 1974, Marcel Broodthaers set up the exhibition Éloge du Sujet at the Kunstmuseum Basel. The anniversary is a welcome occasion to convey a sense of the enormous significance Broodthaers’s art continues to have for any contemporary art-making.The exhibition Le Corbeau et Le Renard: Revolt of Language with Marcel Broodthaers is especially devoted to the film oeuvre of Marcel Broodthaers (1924–76). The project centers around seven films by the Belgian artist from the collections of the Emanuel Hoffmann Foundation. The films were acquired between 1974 to 1975. Loans from Brussels, Basel, Cologne, and Zürich complement the selection, which includes rarely shown films as well as two film installations—one is the elaborate project Un jardin d’Hiver.The exhibition, on the one hand, explores the relations between the visual arts and poetry and/or language in the work of Broodthaers, who for a long time defined himself as a poet before stepping onto the stage of the art world relatively late (in his early forties). On the other hand, it addresses the form in which Broodthaers employs the medium of film to bring together or to reshape various types of artistic and non-artistic materials and inquiries. The title of the project derives from a film installation produced in 1967 that Broodthaers named after La Fontaine’s fable of the same title. Broodthaers’s films break with many norms of the medium and of cinema as an institution. He experiments with the two-dimensionality of the film image and the inverting of lighting processes or the relation of positive to negative. In projecting film onto a screen that he has previously printed on, he breaks with the hitherto fundamental cinematic convention of concentrating on the film image and its immanence. He may use the subtitling machine to transfer hand-drawn pictures to the film; or he sets subtitles as if they were lines of poetry. Filming postcards, maps, and amateur paintings found in archives and antiquarian stores, he plays with the contrasts between static and moving image, between everyday objects and objets d’art. Further, he shows several films in parallel in one room, together with projectors and frequently with other works, too, such as slide projections, prints, and so on. The films document Broodthaers’s undogmatic and pioneering use of different, sometimes discordant, aesthetic procedures. Early on Broodthaers also opened up the frontiers between artistic and curatorial approaches, for instance by taking everyday objects, archive materials, memorabilia, and objets d’art out of their respective contexts and translating them to new presentational and mediating formats. To do this he uses installations, slide projections, books, showcases, and various museum and cinematic formats which, alongside poetry, drawing, collage, objects, photography, and film, go to make up elements of his oeuvre. In an age when the paradigm of media specificity is still valid in criticism and art production, Broodthaers gives a face to an art practice aptly described as “postmedial.” The fox in La Fontaine’s fable Le Corbeau et le Renard, thanks to his rhetorical skills, is able to reverse his and the crow’s material situation. Broodthaers returned to the fable again and again. It embodies an approach that can be applied, metaphorically, to his own working procedures. The short text bears eloquent testimony to the potential of language with ist wit, semantic ambivalences, and poetic openness to destabilize a prevailing reality. Reality for La Fontaine was specifically defined by the conditions at court and by courtiers’ machinations. For Broodthaers, in contrast, the crow in Le Corbeau et le Renard embodies a different power relation that is not so easy to define. This reality derives from the institutionalized and officially sanctioned procedures of cultural production and the stipulations of the critical-academic canon that they establish. Turning his back on the patterns laid down in this system, Broodthaers devotes himself to the desire to find, or invent, ways of writing that go beyond language. Relevant vestiges of such a desire are to be found in Broodthaers’s references to other poet-artists such as Stéphane Mallarmé, Charles Baudelaire, or René Magritte. Thus, Magritte’s painting La trahison des images (The Treachery of Images) of 1929, for instance, better known as Ceci n’est pas une pipe (This is not a Pipe), shows that the revolt of language may not only pertain to its own status (as for instance in concrete poetry), but that it can affect the art work’s entire semantic production. Conversely, Mallarmé’s poem Un coup de dés jamais n’abolira le hazard (A Dice Throw Will Never Abolish Chance, 1897) illustrates how grammar and the meaning of the text can be renewed by the revolt of visuality. Broodthaers sets to work at the intersection of these two directions of motion. By sharpening the antithesis between vision and concept in his work, he is perpetually raising the issue of the aesthetic sign and its potential to mediate between man and the world. In addition, the exhibition also brings works by Hans Arp, Robert Barry, Alighiero Boetti, László Moholy-Nagy, Dieter Roth, and John Smith, each with their own artistic perspective, into playful dialog with Broodthaers’s work in relation to these questions.

As part of the exhibition, the artist’s daughter Marie-Puck Broodthaers will install three display cases with pieces from her own archive that relate to the 1974 show in Basel. The project is complemented by loans from the Broodthaers Estate, from the Musée cantonal des Beaux-Arts Lausanne and private collections from Basel, Brussels, Cologne and Zurich.