The Violence of Handwriting Across a Page 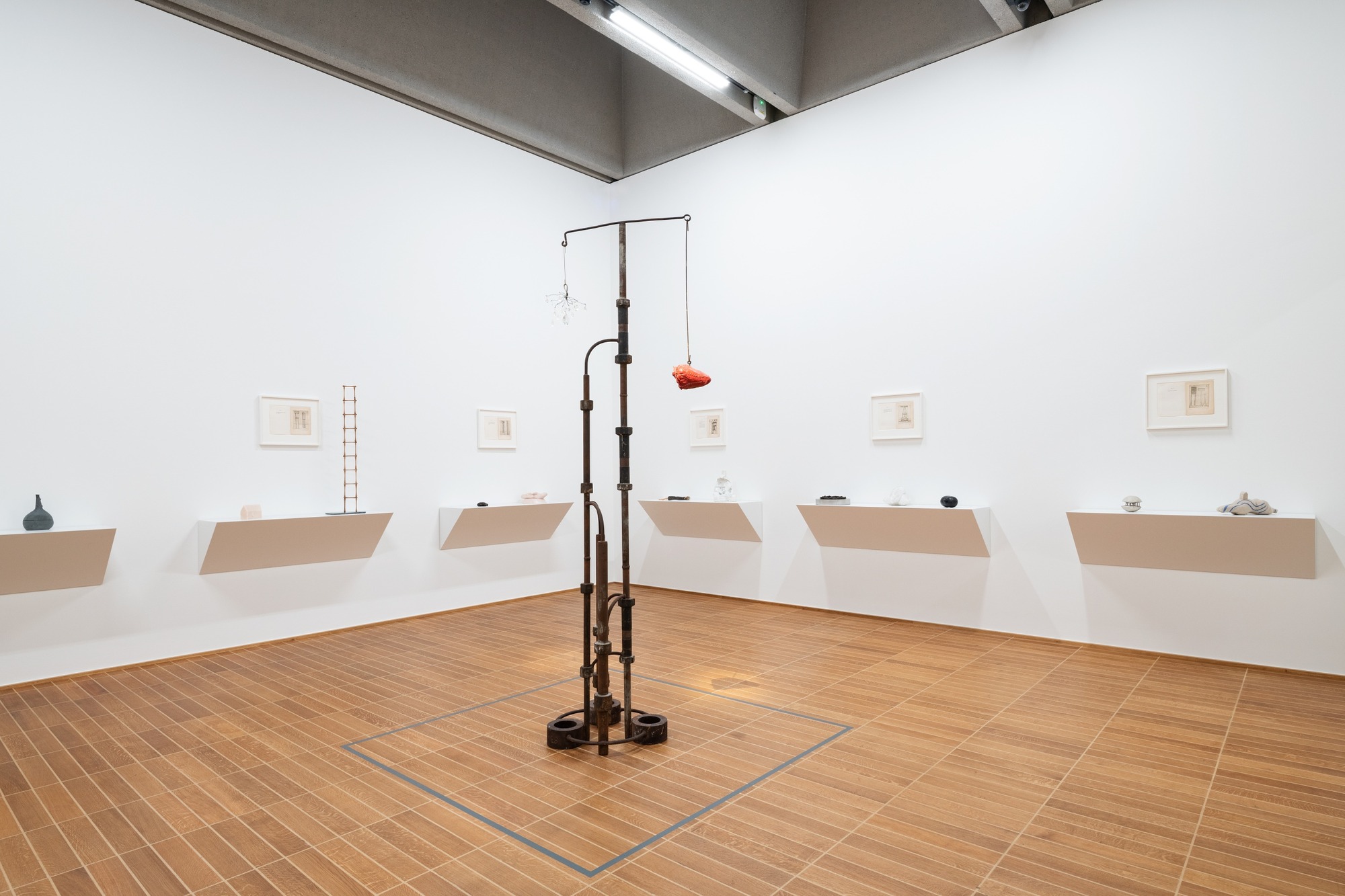 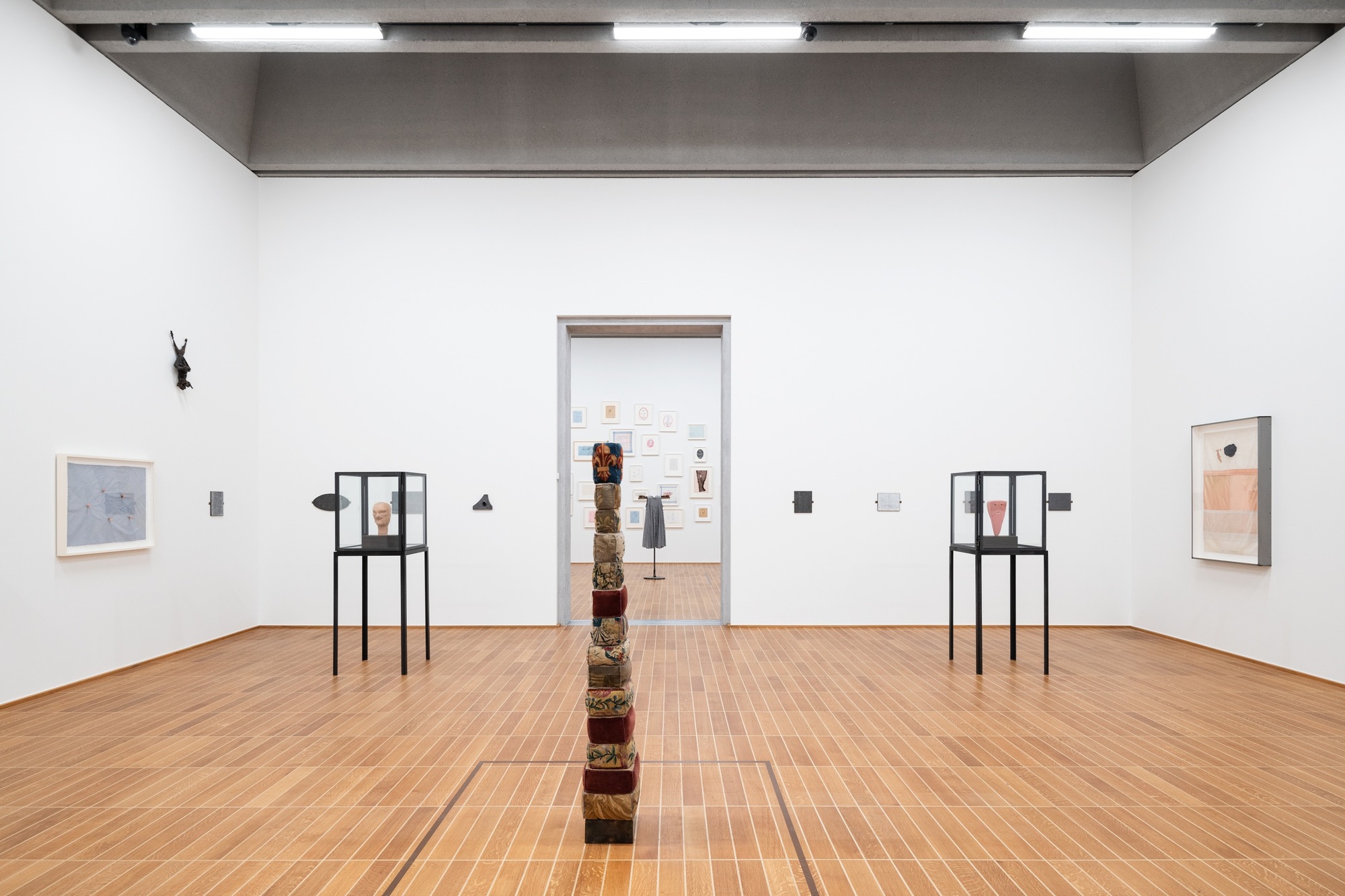 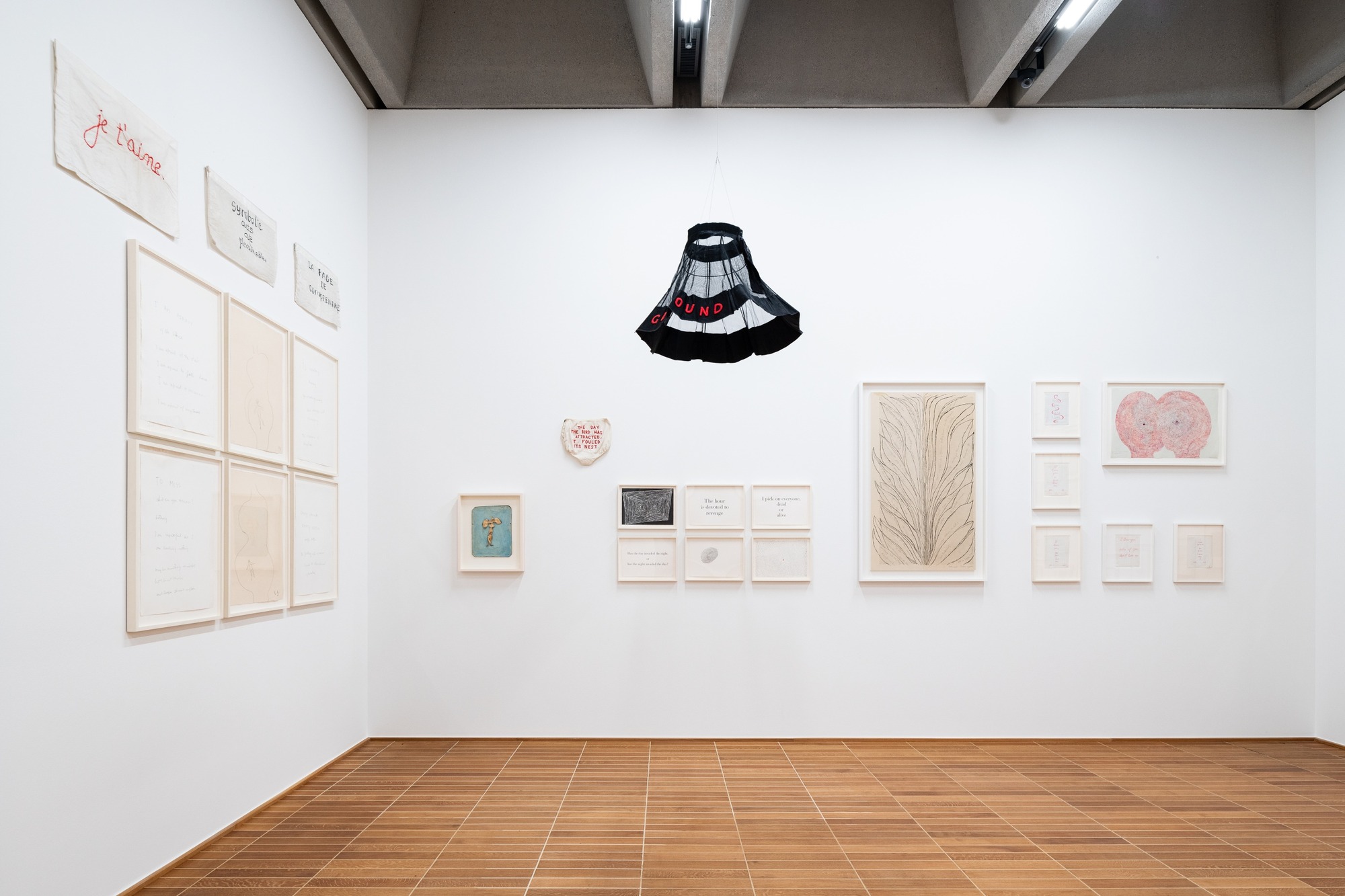 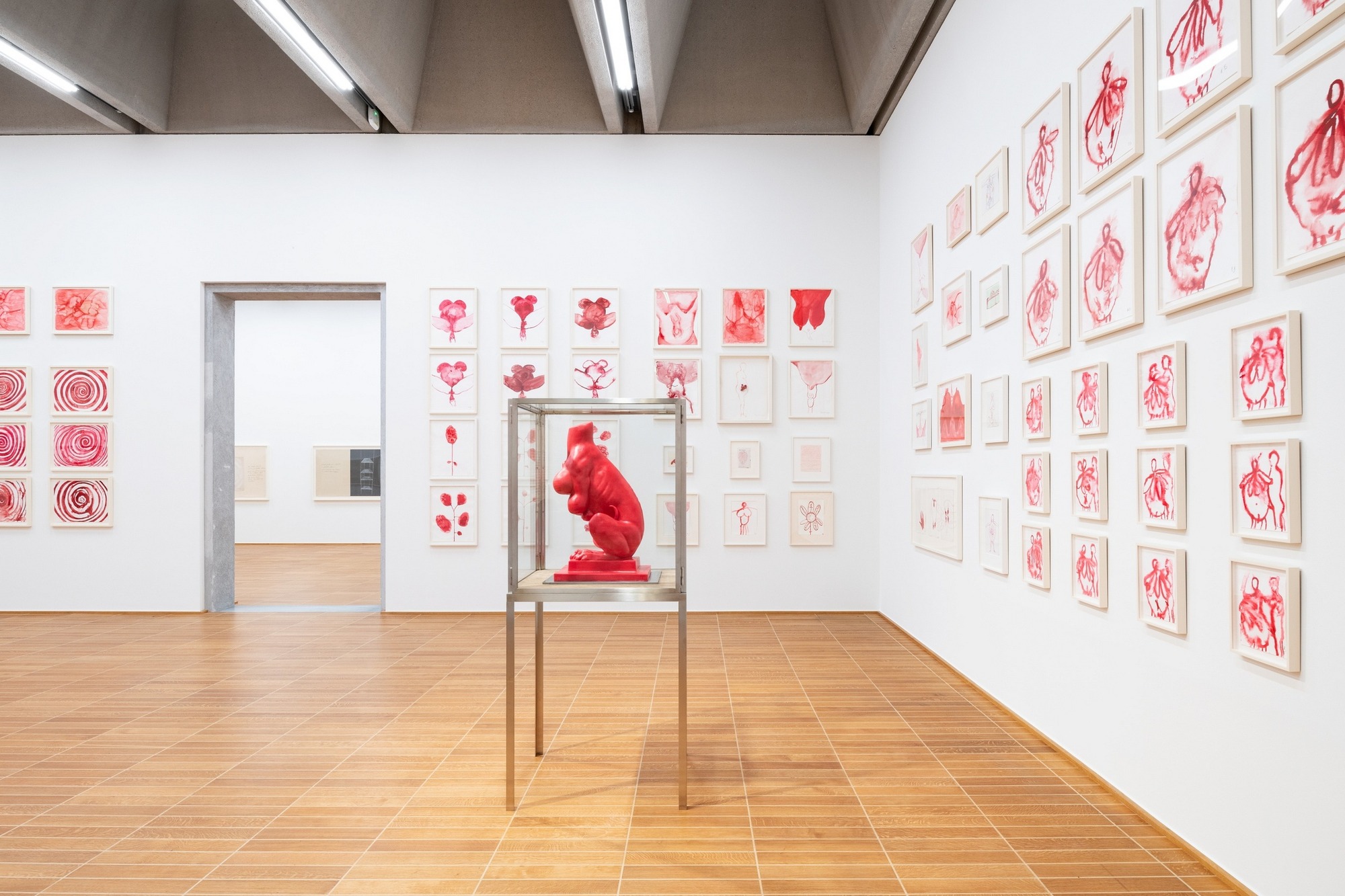 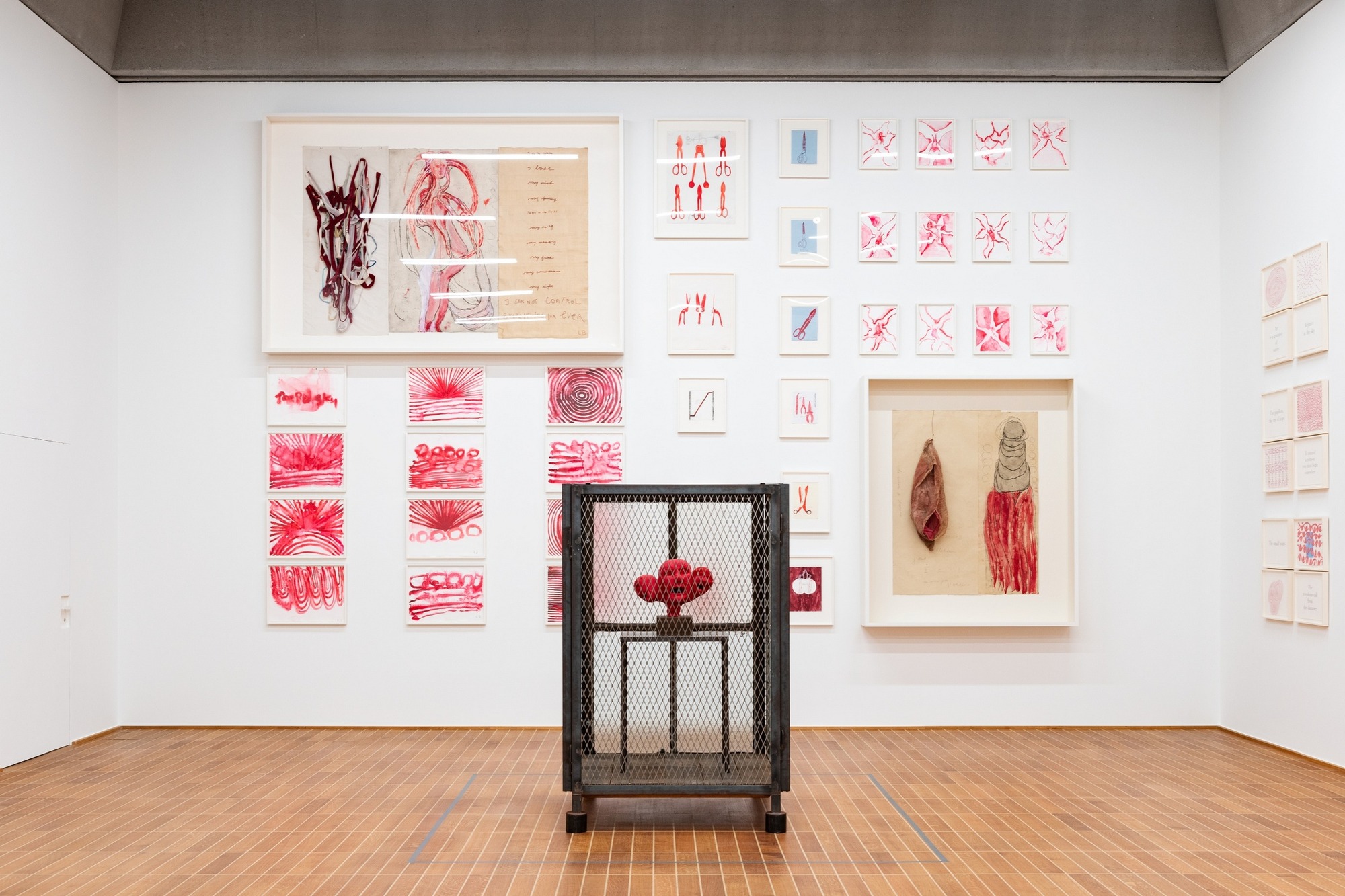 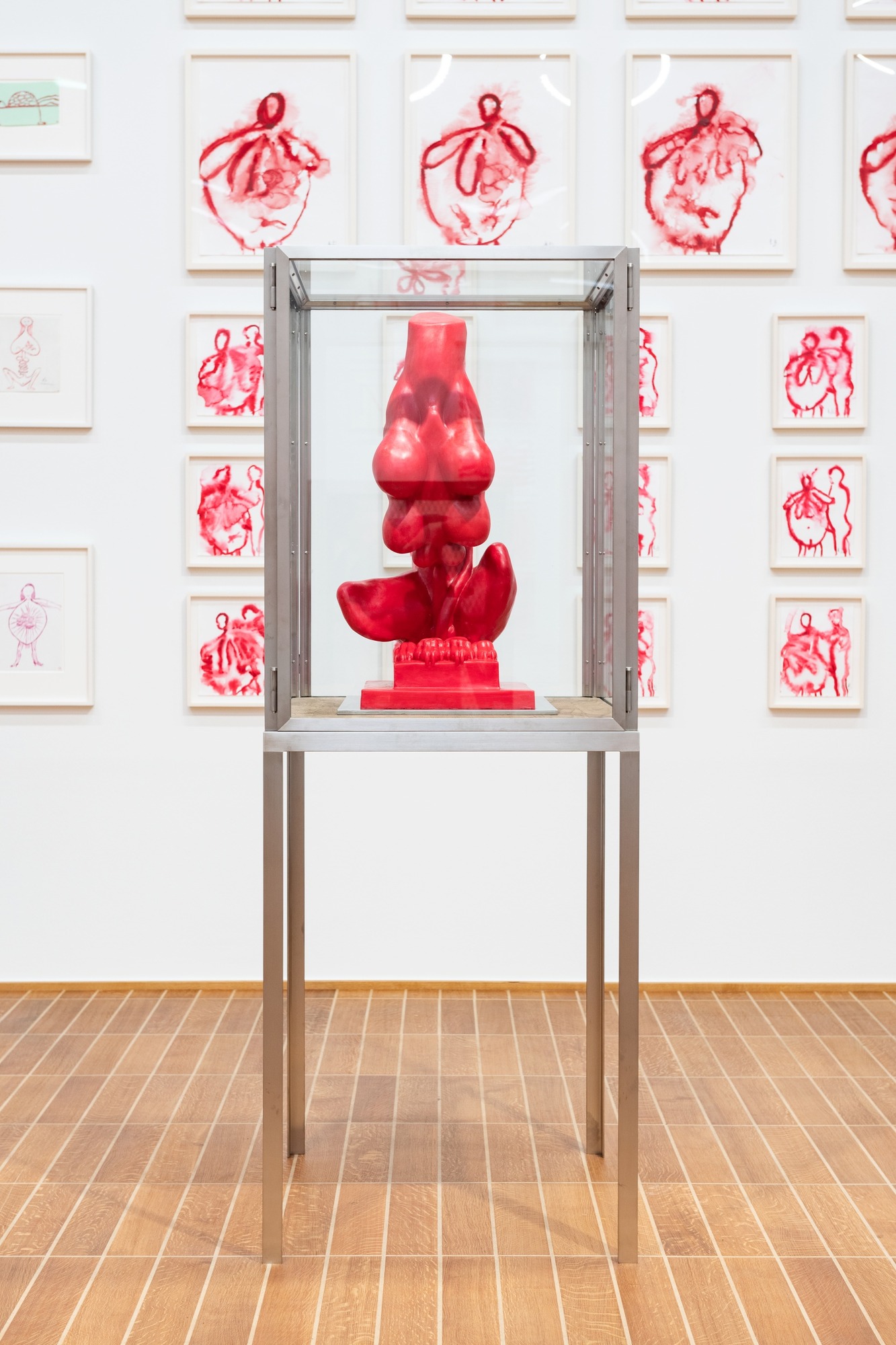 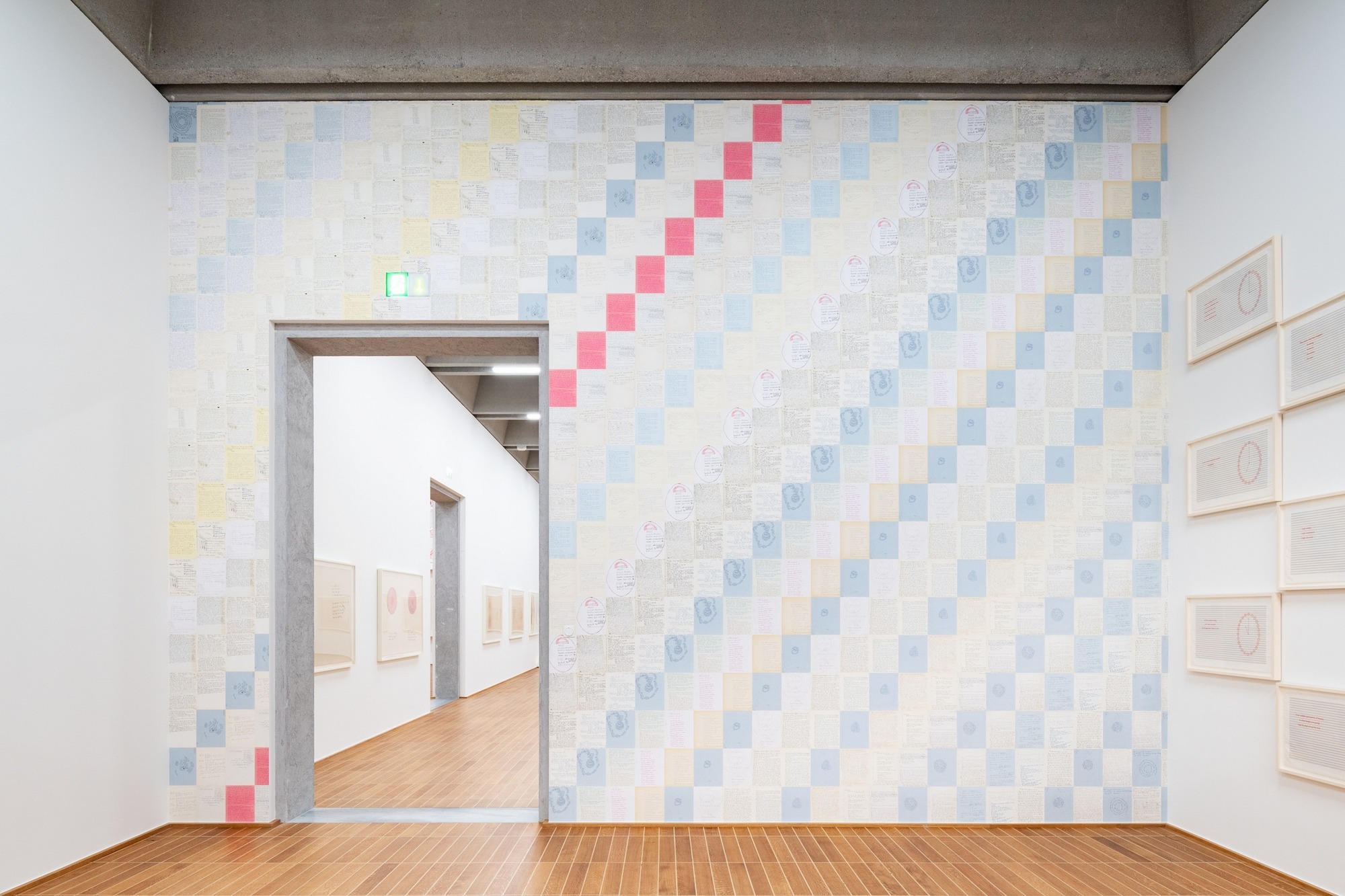 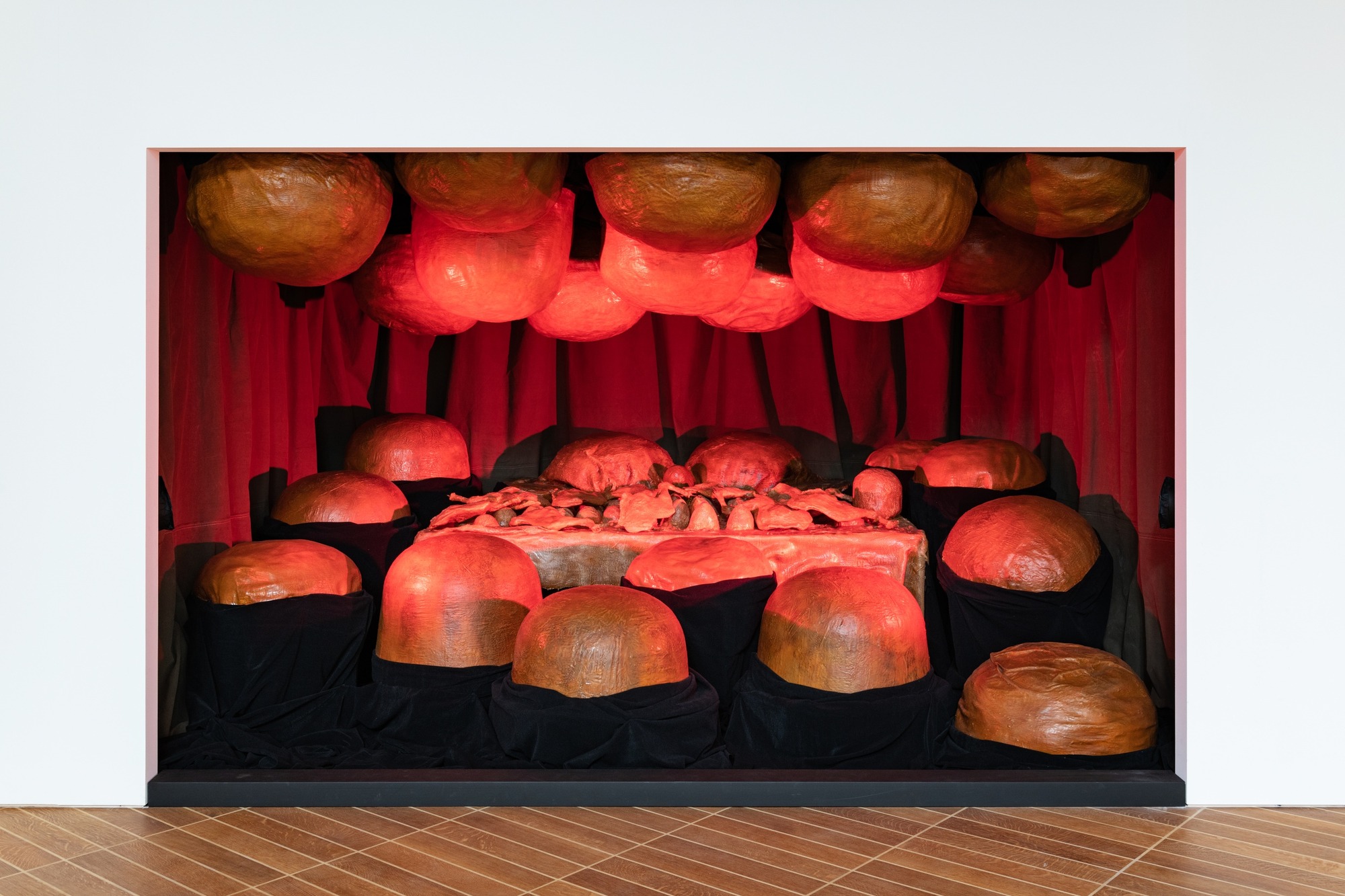 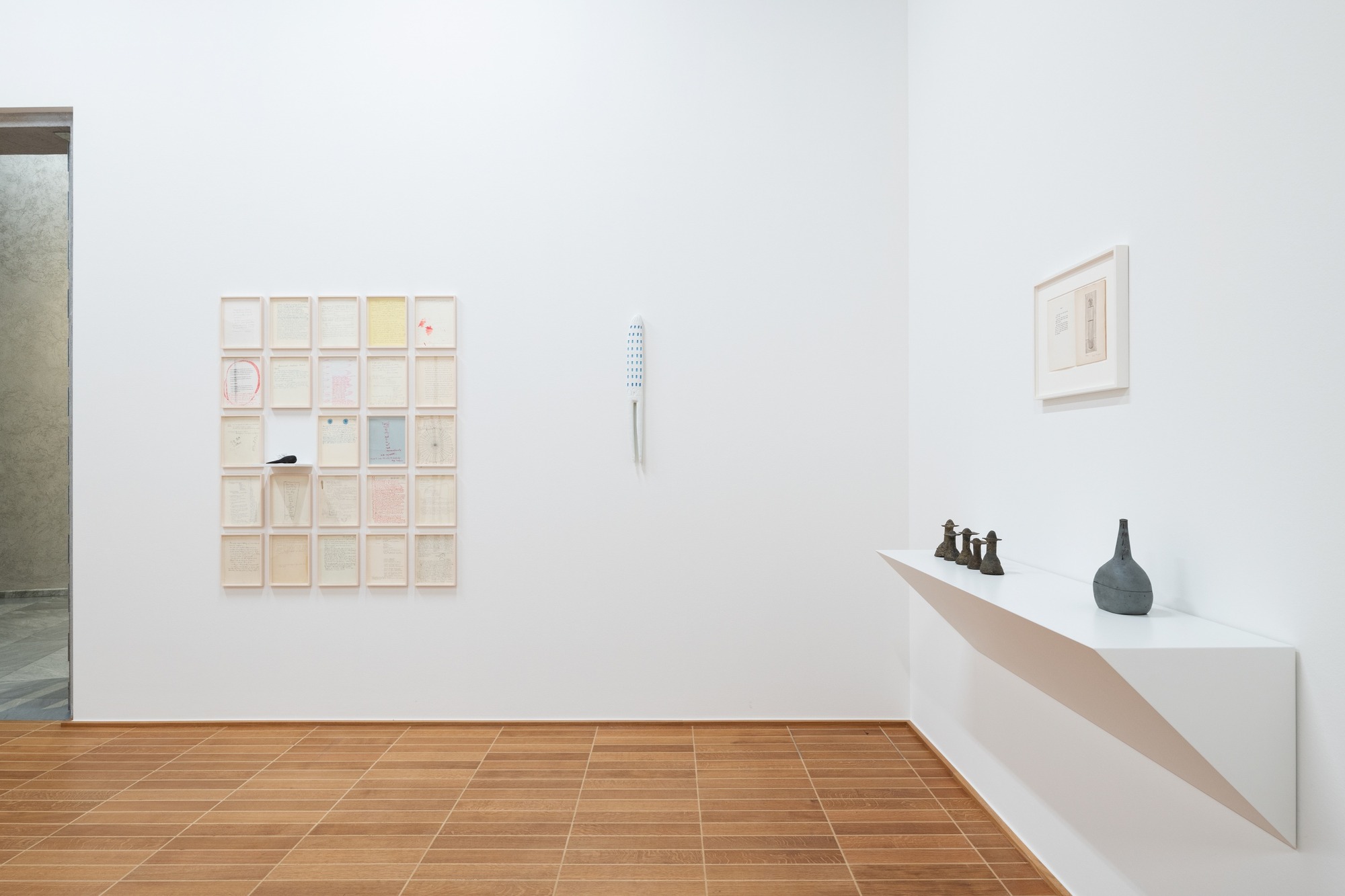 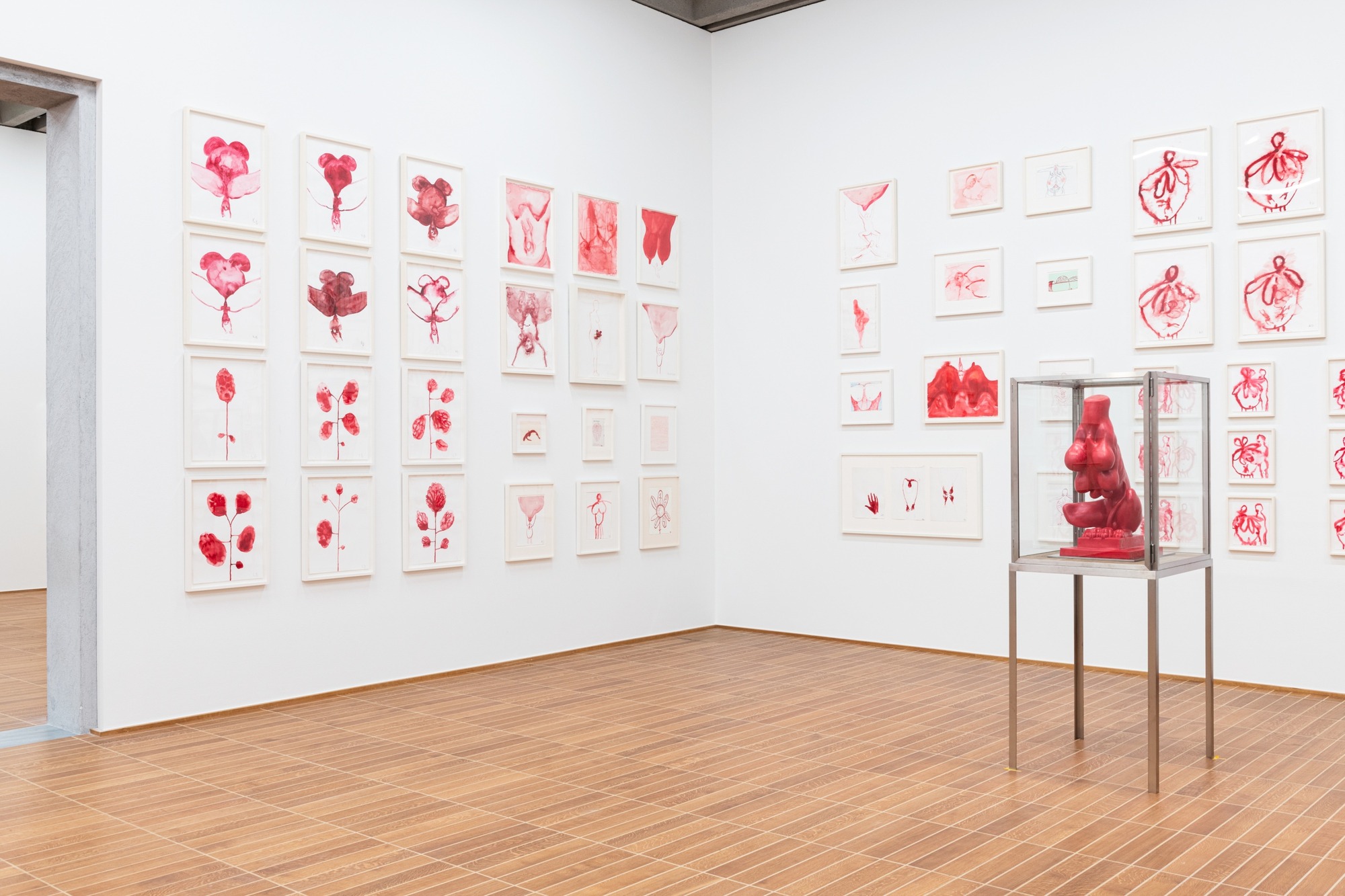 Jenny Holzer (b. 1950), one of the leading artists of her generation, has curated an exhibition of the work of Louise Bourgeois (1911–2010), who ranks among the most influential artists of the twentieth and twenty-first centuries, for the Kunstmuseum Basel. This unprecedented encounter between two giants of American art presents Bourgeois’ work as seen through Holzer’s eyes.

The friendship between Bourgeois and Holzer forms the basis of this ambitious project, which might be understood as an homage by the younger artist to the older. But it is much more than that. While at first glance their work might seem radically different, there is a parallel in the artists’ use of language and, in particular, the written word. This affinity has enabled Holzer to interpret Bourgeois’ work in subtly sensitive ways and offer a highly original perspective on her oeuvre. The Kunstmuseum Basel has given Holzer carte blanche to realize this extraordinary presentation and its related and equally unique artist’s book.

The importance of language

Holzer has been known worldwide since the early 1980s for her subversive and provocative use of public language. She employs a wide variety of media and formats, from T-shirts and street signs to large-scale projections and LED trucks. Her work dissects and questions the power relations that govern politics, gender roles, economics, and society.

In her multifaceted and inventive artistic practice, Bourgeois explored the depths of her inner psychic landscape. Her heterogeneous art deals with a wide range of human emotion: love, desire, dependency, sexuality, rejection, jealousy, loss, and abandonment. Bourgeois wrote almost obsessively. Her extensive archive contains diaries and letters kept over many decades, and includes several hundred loose sheets written during the course of her psychoanalysis, which she began in 1951 shortly after the death of her father.

Bourgeois’ writings had an important function in her creative process. Like her artworks, they gave expression to, and sometimes alleviated, her traumas. The act of writing allowed her to consciously express what were sometimes unconscious emotions and impulses. In her work, she used the written word in many forms: embroidered on textiles, such as underpants and handkerchiefs, stamped into lead plaques, inscribed on prints, and included in certain of her Cell installations, among others. In many later works, Bourgeois mined earlier texts from her diaries and writings, conflating not only image and the written word, but also past and present.

For the exhibition Louise Bourgeois x Jenny Holzer, Holzer has created thematic groupings of Bourgeois’ work in the nine galleries on the top floor of the Kunstmuseum Basel | Neubau. Forgoing chronology in favor of an intuitive and poetic logic, each room stands on its own, with its own distinct identity; and yet together the galleries give rise to a densely layered narrative about memory, the five senses, landscape, the unconscious, sexuality, motherhood, trauma, and creativity.

In characteristic fashion, Holzer has moved beyond the walls of the conventional exhibition space to stage interventions throughout the rest of the Kunstmuseum Basel. The passageway connecting the Neubau and the Hauptbau is occupied by Bourgeois’ rarely seen Twosome (1991). This monumental mechanical installation, which resembles a railroad tank car and moves back and forth on a track, embodies the dynamic oscillations between male and female, attraction and repulsion, union and separation, and mother and child.

Twosome creates an ideal transition to lead the viewer to the Hauptbau, where Holzer has placed sculptures by Bourgeois in dialogue with masterworks from the museum’s collection, drawing out associations and oppositions between the old and new while reinforcing Bourgeois’ place within art history.

Holzer’s engagement with Bourgeois’ work is deepened in her artist’s book, where she has orchestrated a sophisticated narrative of Bourgeois’ art and writings in full-page juxtapositions of often radically cropped compositions. At times she situates Bourgeois within art history by pairing images of her work with similarly altered images of masterpieces from the Kunstmuseum’s collection. The resultant confrontations are unexpected, jarring, and inspiring. This unique artist’s book is published in collaboration with JRP | Editions.

Related to the artist’s book the Kunstmuseum Basel is presenting a selection of works on paper from the Kupferstichkabinett (Department of Prints and Drawings) in the two graphic cabinets on the first floor of the Hauptbau neighboring the Old Master galleries.

LED frieze, AR app, and projections in the city

Holzer has adapted fragments of Bourgeois’ writings to the LED frieze on the Neubau’s facade. She has also developed an augmented-reality app with the London-based digital agency Holition that transforms Bourgeois’ pivotal work, Destruction of the Father (1974), on view in the Neubau, into an immersive, multisensory experience. The app will also allow users to take some of Bourgeois’ words with them wherever they are.

And during the first week of the exhibition, excerpts from Bourgeois’ texts will be projected over the facades of public buildings throughout the city of Basel.

The exhibition is supported by:
The Easton Foundation
Isaac Dreyfus-Bernheim Foundation
Foundation for the Kunstmuseum Basel
Hauser & Wirth
Kukje Gallery

The combination of word and light plays an important role in Jenny Holzer's work: temporary light installations featuring monumental lettering projected onto buildings and landscapes have been among her best-known works since the 1990s.

The exhibition Louise Bourgeois x Jenny Holzer in Basel will be no exception: During the first days of the exhibition (February 16–22), Holzer will project excerpts from Bourgeois' writings on three public buildings in Basel: City Hall, the Old University on the Rheinsprung, and the Kunstmuseum Basel | Hauptbau.

Holzer has developed an augmented-reality application with Holition, an award-winning London-based creative innovation studio, that turns Bourgeois’s pivotal Destruction of the Father (1974), on view in the Kunstmuseum Basel | Neubau, into an immersive, multisensory experience.

The app will also allow users to see Bourgeois’s words floating around them wherever they go, and to create and share their own AR images.

The app can be downloaded for free from the App Store (iphone) and the Google Play Store (android).
www.kunstmuseumbasel.ch