One Million Years - System and Symptom 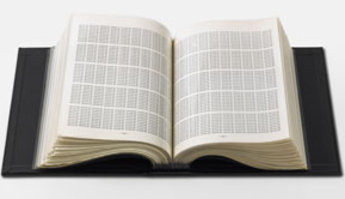 Systems coordinate things. Systems define processes and relations. Complexity is organized into functional structures in systems. Systems are patterns—their principle is only recognizable because of continual repetition. Otherwise the pattern disintegrates. Systems follow their own logic. In this way they sustain themselves. Whatever follows their logic fits in with them—whether it be the standardized shelves of a globally distributed furniture system, a date in a calendar system, the speech modules of a service hotline’s telephone script, or the citizen’s willingness to be part of the labor market. Systems test the compatibility of the parts with the pattern. The relation of the system to its surroundings is selective, as the sociologist Niklas Luhmann says, and therefore at the same time normative. What is not compatible with the norm of the system becomes a symptomatic problem for this norm. The logic of the system becomes apparent when it comes up against its limits—often not until then. Because norms as such are invisible. In the symptomatic limiting case, the exception to or infringement of the limit, they show their true face.

The exhibition One Million Years—System and Symptom addresses the aesthetic, cultural, and political implications of systems logic from the contemporary art point of view. It brings together art projects that tackle systems and systematics in a wide variety of ways.

Thus, the exhibition presents artists, on the one hand, whose work pursues the construction of precise systems that are committed to their own aesthetic logics, as for example Josef Albers, Hanne Darboven, On Kawara, Sol LeWitt, Jan Schoonhoven and Simon Starling. These artists explore the principle of systematics coolly, playfully, and often so extremely that they systematically frustrate every normal kind of systems thinking.

But the exhibition also presents works that make social systems, norms, and mechanisms of exclusion that are otherwise invisible visible, as is the case with Henrik Olesen, Martha Rosler, Fiona Tan, Andreas Slominski, and Katharina Fritsch. These works uncover situations where the logic of a system comes to light with surprising clarity as a symptom. They describe the pathology of life in systems. Hence, they raise questions as to where social identity and supposedly normal life are produced in the home, at school, or in the judicial system, and where reprisals lie in wait.

This exhibition, therefore, brings together the works of artists who appropriate systems in their own highly individual ways, as well as works in which the systematic ordering of life is symptomatically represented and subjected to critique.

Sponsor
Funds for Art Activities at the Museum für Gegenwartskunst of the Emanuel Hoffmann-Stiftung and the Christoph Merian Stiftung
kunstmuseumbasel.ch