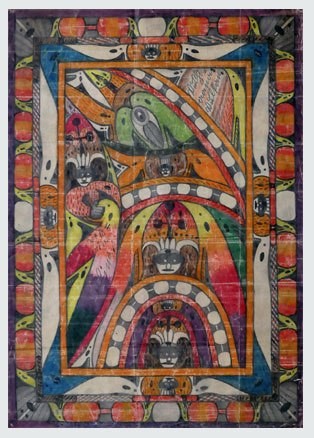 In 2013 the heirs of Paul Haldemann donated the drawing "Vusli=aana:Vulkan. Gross-Gross-Keiserinn Adolfina" (Vusli=aana:Volcano. Great Great Empress Adolfina ) to the Adolf Wölfli Foundation. Haldemann was the son of the janitor at Waldau Psychiatric Clinic and became personally acquainted with Adolf Wölfli, who gave him the drawing as a present in 1920. In 1924, while he was training to become a teacher, Haldemann gave a talk on Wölfli and his art. His talk and the drawing are shown in the current exhibition for the first time.

In his talk, Paul Haldemann presents his personal insights into Wölfli’s art and what he was like as a person. He describes his encounter with the artist, explains three of his drawings and proposes that we view people in psychiatric clinics in a different way. This new understanding was, among others, influenced by Walter Morgenthaler’s pioneer study of Adolf Wölfli, Ein Geisteskranker als Künstler (A mental patient as artist). Published in 1921, the monograph caused quite a furore in the early 1920s (see Morgenthaler’s personal copy in the exhibition). While artists and intellectuals were very enthusiastic about it, the book was received in a rather condescending manner in psychiatric circles. The Swiss newspaper Neue Zürcher Zeitung devoted a two-part review to it, the German poet Lou Andreas-Salomé and Rainer Maria Rilke discussed it in their correspondence, and the Swiss artist Fritz Baumann visited Wölfli in Waldau where he purchased artworks from the patient. Additionally, in 1921, bookshops in Bern, Basle and Zurich exhibited Wölfli’s drawings during the launch of Ein Geisteskranker als Künstler—so that Wölfli had his first exhibitions. Theodor Tobler, the owner of the chocolate factory in Bern (Toblerone!), visited Wölfli too. In the company’s magazine Jurnalo Tobler (which is shown in the exhibition) he tells the story of his encounter with the artist. Entitled “Kunst, Wahnsinn – Chocolade” (Art, madness—chocolate), it included a coloured reproduction of the drawing Wölfli made especially for him with, showing among other the Tobler factory on Länggassstrasse (now “Uni Tobler”).

Publications, lectures, exhibitions, and reports were instrumental in paving the way for a new way of viewing art, the psyche, and ultimately humanity. With the spread of Fascism, however, this development came to a halt and after 1930 silence descended on Wölfli’s works too. After World War II, the French artist Jean Dubuffet significantly contributed to the renewal of interest in artists such as Wölfli. Dubuffet, taking his idea of “Art brut” as a starting point, accrued a collection of art by social outcasts that is still a model today (In 1975 he donated it to the city of Lausanne.) On display are a series of his publications revealing Dubuffet’s keen professionalism and knowledge in graphic design to promote his idea of an “Art brut”.
www.kunstmuseumbern.ch