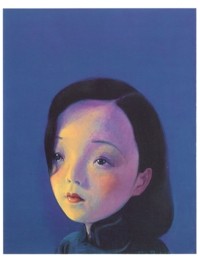 Within the framework of the "Chinese Window", that is, the presentation of some important aspects of the Sigg Collection following on from the very successful exhibition Mahjong in 2005, we will be showing two parallel solo exhibitions from two important painters of the middle generation: Liu Ye and Ji Dachun Liu Ye lives in Peking where he was born in 1964. He is among the few artists who have travelled regularly between Europe (Germany, Holland and England) and China. This allowed him, in his own words, "to concentrate on himself". Liu's youth, influenced socially by the Cultural Revolution (1966-1976) and visually by kitsch propaganda art, has brought forth an artistic world that on the surface appears to be childlike but in no way proves to be naïve. It is shaped by memories from younger years, fairytales and childish ideas of happiness. Thus, he juxtaposes catastrophes from world history with figures of winged girls and boys, a ship sinks under a hail of bombs while a toy sailor gives a salute.Sometimes Liu Ye drifts back to adolescence when dredging up repressed images: his teacher (My Teacher II, 2001), executed in yellow, appears as a sexy, half-clothed, enigmatically smiling pin-up with a whip. In the portrait Ruan Ling Yu (2002), a "harmony in blue", the round face of a young woman with a melancholy gaze appears in the night sky like a moon. Here, we are not far removed from sentimental Montmartre kitsch - if the masterly brushwork and sophisticated composition did not prove that an artist with consciousness was at work. In his works, Liu attempts to combine the imagination and sensitivity of fairytales with the strict and rational thought of philosophy.
Ji Dachun was born in Nantong (Jiangsu Province) in 1968 and lives and works in Peking. In his paintings and drawings he combines Chinese tradition and western modernism to create an ironic, sometimes humorous, cocktail. On a white-primed background he carefully centres an object or figure, sometimes two objects or persons in a dialogue. The empty expanse of white is always an important element of the composition. Ji Dachun has two "styles": one is graphic, hailing from the traditional scholarly painting of the "literati" and reminiscent of the "scribble technique" of Cy Twombly; the other is more pictorial and is indebted to Picasso and American painting (for instance, Philip Guston). However, surrealist moments always play a part: bizarre images; peculiar combinations of objects and figures or body fragments; unusual perspectives. What is supposedly naïve can suddenly become cynical; the apparent woodenness of the figures conceals a bewildering intellectual mobility. Thus, Ji Dachun paints a male nude carrying the head of Adolf Hitler; a flayed Mickey Mouse; a teddy bear copulating with a pig; a traditional Chinese landscape intersected by flashes of lightning; a dry indigo root or scholar's stone leaning phallically sideways into the picture. Ji Dachun's finely done paintings conceal traps: one must step warily.
Curator: Bernhard Fibicher
www.kunstmuseumbern.ch