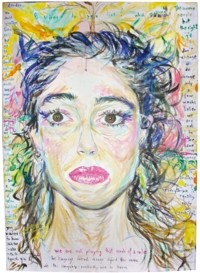 In her first exhibition in the Museum of Fine Arts Bern, the new curator of the contemporary department, Kathleen Bühler, will be taking as her theme what is autobiographical in contemporary art as an instrument of self-representation and self-discovery. The exhibition will be showing works from the collection of the Museum of Fine Arts Bern and from private collections as well as some works created expressly for the exhibition by young Swiss and international artists.
"Ego Documents" is a collective concept for any kind of autobiographical self-testimony. The autobiography is more than a self-portrait: It is a retrospective and presents the finding of an individual identity in a narrative or documentary process.
In a time in which the borders between public and private, fictitious and real are continually being redefined, the presentation of one's own life can come under fire in the tension between contradictory impulses. Contemporary artists in particular are subject to pressure by the art market to present resumes that are as intriguing as possible.
This exhibition illustrates the fact that although what is autobiographical in art can be a narcissistic reflection of self, it can also be of service in the search for the ego or in the dialogue with transience.
www.kunstmuseumbern.ch