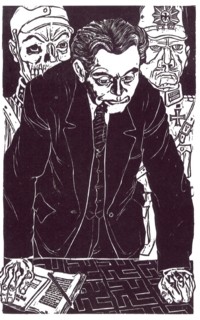 On the occasion of the 100th birthday of the Bernese artist Emil Zbinden, this retrospective will offer the opportunity to rediscover his work with its socially aware commentary on contemporary issues.
Today, Zbinden is known to the broader public particularly as an artist of woodcuts. In addition to his well-known work - that is, wood engravings, wood and linoleum cuts - watercolours and drawings are being shown.
For the exhibition, the almost untouched estate of the artist (works, printing press, printing blocks, library, correspondence etc.) is available to us. In order to illustrate correlations, some individual graphic works by artists with a close relationship to Zbinden such as George Grosz, Otto Dix, and Frans Masereel have been included.
Over decades, Emil Zbinden lived and worked in the city of Bern. As a founding member and president of the woodcutting artists association Xylon Schweiz (1944) and, together with Frans Masereel, the Xylon International (1953), he supplied significant stimulus. In addition to this he was well-known for his work as an illustrator and designer of many books. In particular, from 1936 onwards, the over 900 illustrations in the complete works of Gotthelf by the Büchergilde Gutenberg were instrumental in furthering his reputation as an excellent wood engraver
www.kunstmuseumbern.ch