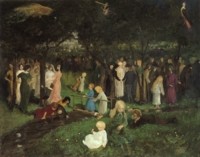 Ernst Kreidolf (1863–1956) is known, not only in Switzerland, as the creator of successful and still-popular picture books such as “Blumen-Märchen”, “Die Wiesenzwerge”, “Sommervögel”, “Lenzgesind” and “Ein Wintermärchen”. The popularity of the picture book illustrator still doggedly disguises the fact that Ernst Kreidolf was first and foremost a painter and graphic artist and always regarded himself as such.
The exhibition “Ernst Kreidolf and his painter friends”, therefore, focuses on the paintings of the artist, choosing thereby a new and broader perspective. The intention is not only to illustrate the development of the artist’s painting but also to show its place within the various art trends that were current during that period. Here, the artistic city Munich, where Kreidolf lived from 1887 to 1889 and again from 1895 to 1917, plays an important role as do his numerous painter friends. The discussion with the ideal as represented by Arnold Böcklin – felt by Kreidolf and many of his colleagues to be a pioneer – but also the need for Swiss artists to stick together when abroad, even though sometimes holding opposing artistic points of view, had a bonding effect and resulted in a stimulating exchange. The artists gave each other drawings and paintings and dedicated their works to one another and also took up the same themes, whereby the mutual aspects with regard to content and form are often visible only at second glance.
Among Ernst Kreidolf’s painter friends and acquaintances from those years in Munich around the turn of the century were such resounding names as Albert Welti with whom he enjoyed a close friendship until Welti’s untimely death, Paul Klee and Cuno Amiet. In looking back one must not forget other artists who are less well-known today such as Wilhelm Balmer or Eduard Zimmermann. Later he also met Hans Sturzenegger and Hermann Hesse.
The exhibition follows, therefore, not only the traces of the painter and graphic artist Ernst Kreidolf, his artistic roots and his multifarious connections with contemporary artists and literary figures but at the same time offers us a lively picture of a whole generation during a period of upheaval and emergence. The exhibition is curated by Dr. Barbara Stark, director of the Städtische Wessenberg-Galerie in Constance where the exhibition will be located from January 27 to April 8, 2007
www.kunstmuseumbern.ch