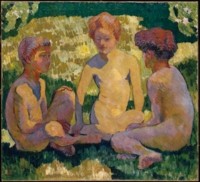 There is no doubt that Giovanni Giacometti - like Amiet - is one of the leading Swiss artists who, between Impressionism, Post-impressionism and Fauvism, absorbed and further developed the essential new aspects of modernism. His outstanding work radiates a great coloristic force that was to characterize the artist up to the time of the mountain and landscape panoramas bathed in a dazzling light which he painted in Bergell and Maloja, where he had his summer studio. Giacometti strove to reproduce changing light conditions and to intensify the impact of light and colour, achieving this by juxtaposing brush strokes or dots in unmixed, often complementary colours.
Approximately one hundred paintings by Giovanni Giacometti will focus attention on his ingeniously vibrant orchestration of light. The exhibition will be complemented by several works by contemporaries like Amiet and Segantini, the intention being to show that in the context of his neo-impressionist colleagues and in the circle of Expressionists, Giacometti has an equivalent place.
The exhibition will demonstrate that when it comes to the development of modern painting Giovanni Giacometti is a remarkable personality of international standing.

Both the exhibition and the catalogue are generously supported by the Credit Suisse.
www.kunstmuseumbern.ch