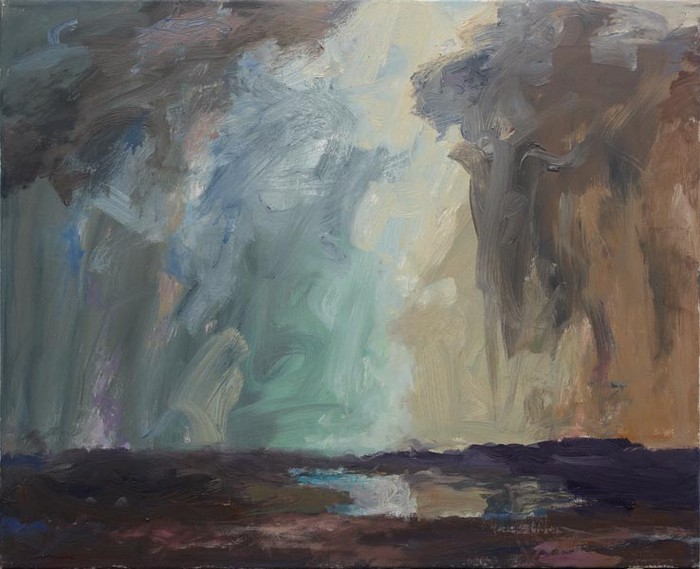 The Retrospective on Martin Ziegelmüller (b. 1935) taking place simultaneously in the Kunstmuseum Bern and in the Kunsthaus Langenthal will be the first comprehensive overview of this Swiss artist’s multifaceted work. In a very palpable way, it presents the development of the artist’s subject matter from the beginning of his career to the present. While the Kunstmuseum Bern focuses on his landscapes and urban panoramas, the Kunsthaus Langenthal shows – besides landscapes depicting rivers – gouaches of work-ing life as well as portraits of friends and acquaintances from the art scene.

Views of wide expanses of countryside, endless seas of urban developement, and cloud-filled skies belong to Martin Ziegelmüller's key motifs. Details regularly capture this painter’s attention alongside his fascination for panoramic views: Whirlpools in rocky crevices, scrub growing on river banks, or dead beetles. Over the decades he varied his subject matter, viewing it from ever new angles – as very real environments or surreally transformed, as relatively lifelike copies or archetypes – or obscuring it in a maze of brushstrokes.

Initially in his career he was indebted to his teacher Cuno Amiet. But then Martin Ziegelmüller, exploring and responding to his environment, discovered a visual language of his own and pursued his own artistic goals independent of fashionable trends in painting. He finds unbounded inspiration in the things close and familiar to him: the river courses he explored as a child, routine work in a village factory, the sky over the region of his Seeland home. He is fascinated by the moods of landscapes, gathering storm clouds, light and reflections. This artist’s enthusiasm for capturing light effects in painting grows with their complexity in representation. Wearing a headlamp he painted the cities Bern and Fribourg at night, almost dissolving their appearance into impressionistic oceans of light. Additionally, Martin Ziegelmüller pursues the effects of reflections and harmonies of color when painting the image of an operating theater or a glassworks. Such representations are accompanied by ominous and apocalyptic visions in which the artist engages with civilization’s gloomy prospects. Nature reclaims the cities of Bern, Basle, and Zurich for itself, engulfing highways with its wild growth or swamps them under water. While Basle is torn by a rift, in Bern only ruins of the Federal Palace dome stick out through the layer of ice obliterating the city.
www.kunstmuseumbern.ch