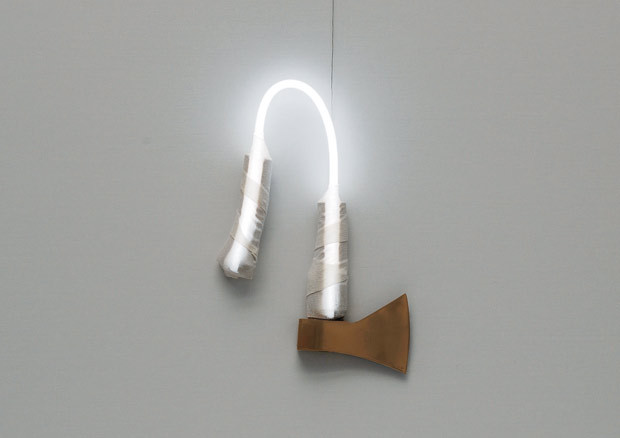 The Greek arte povera artist Nakis Panayotidis was born in 1947 in Athens. He settled in Switzerland in 1973 after studying architecture in Turin (in 1966) and visual arts in Rome (enrolled 1967). Since then he lives and works both in Bern and in Greece—on Serifos Island of the Cyclades.

In the tradition of arte povera, Panayotidis employs a great diversity of materials in his art, such as stone, straw, lead, iron, copper, and lamps etc. His art combines light and life and is never static. It always revolves around opposites that have found a moment of equilibrium. He loves the times in which he lives, at the same time accepting mythology and the art of the ancients as part of his life. Panayotidis remains a realist throughout and always begins with what he finds around him. It is only this that counts. He reflects on the meaning, the value and the truth of what he sees in his objects, photo installations, images and neon works. The goal of his art is to underscore what is intrinsically permanent in momentary chance images.

It is no coincidence that Panayotidis chose Bern as his adoptive home. Here he had his first solo exhibition at Wahlen Gallery (1974) as well as his first museum exhibition at the Kunstmuseum Bern (1994). Exactly twenty years later the Kunstmuseum Bern is devoting a comprehensive retrospective to this multifaceted artist. Sculptures, installations, paintings, drawings and photographs produced by the artist since the early 1970s will be on show. The focus will be on recent works by the artist made especially for the exhibition. With the show the Kunstmuseum Bern is presenting, for the first time in Switzerland, one of the leading representatives of arte povera in a large museum exhibition.