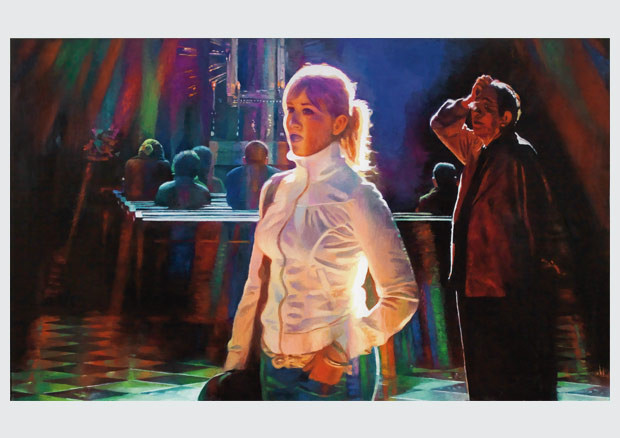 The artist couple Silvia Gertsch (*1963) and Xerxes Ach (*1957) employ very different stylistic means, art materials, and visual languages. However, both artists share a fascination for light and color in their work. In its fall exhibition, the Kunstmuseum Bern will be presenting an encounter with both of these Bernese artists. The show will be the first of its kind to focus on the individual works of both artists or engage with the artist couple with such intensity.

Silvia Gertsch’s reverse-glass painting technique creates compositions of young people during summertime, sunbaking, or strolling along streets, as well as children absorbed by play. In contrast, Xerxes Ach explores the microphenomena of light refraction on the surfaces of different materials and the multifarious impressions it creates. Despite the fact that both artists have adopted dissimilar stylistic languages—one articulates herself in the vocabulary of realism, the other in color-field abstractionism—they both take recourse to photographs as their starting point. With the aid of photography they capture transitory moments in time and ephemeral visual impressions. In Gertsch’s case, the photographs are snapshots of everyday life, pictures that would otherwise be lost among the banality of the everyday. Ach, in turn, zeroes in on detailed impressions of the effects of light as we perceive them and, in his art, translates them into a cosmic view of the world.

Silvia Gertsch and Xerxes Ach both address the ephemerality of life and the fleeting nature of sensual things. The shared environment in which the two artists live is the starting point of the exhibition—for which many new works were made. The show investigates the different stylistic languages of the artists and gives ample space to vision as our means of sensually experiencing the world around us.
www.kunstmuseumbern.ch