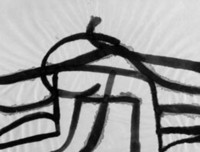 The American artist Suzan Frecon (born 1941) is known primarily as a painter. However, her graphic work, consisting mainly of watercolours, represents much more than mere preparation for her oil paintings. A selection of her versatile works on paper is being presented in the graphic cabinet. The works were all done between 1989 and 1994 and were purchased by the museum or donated by the artist herself in connection with her solo exhibition Suzan Frecon – Works on paper (1990) and the group exhibition Zeitgenossen (Contemporaries) – Selected works on paper from the collection of the Museumof Fine Arts Bern(1994).
In her watercolours, Frecon moves with great freedom within the tense atmosphere of coloured areas and brushstrokes reminiscent of calligraphy. Sometimes the colour covers the paper completely with various geometric coloured areas overlapping each other; sometimes the brushstrokes are reduced to their pure graphic function and cover the whole sheet of paper as simple lines. These generous settings are contrasted with precisely placed, small, emblematic markings that cover the paper sometimes sparingly, sometimes thickly.
They remind one of a foreign, archaic script or the remains of an ancient settlement of which only the foundations are still visible. Individual titles such as Mark painting – Struggle to write, Architecture and Woman inventing Man, which are indicative of the artist’s great interest in elementary, cultural phenomena, also support such associations. Even if cultural and art history are significant sources of inspiration for Suzan Frecon, it is rather the pictorial aspects of drawing and the connection between figure and background that is the focus of her artistic interest. The choice of material is particularly important. She uses absorbent paper with a rough surface so that the paint can run, and polished paper so that the contours of the lines are maintained. In a myriad of variations, therefore, this presents a fascinating interaction between the texture of the surface, flowing watercolours and drawings with sharp contours.
www.kunstmuseumbern.ch