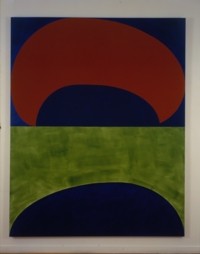 Throughout her career Frecon has maintained a singular focus, dedicating herself to the process of painting. Through assiduous arrangements of color, form, and texture, she produces artwork that is visually stunning, but that also resonates on a philosophical level. In her own words, "I consider painting to be a high form of knowledge; it should be constructed so that, when successful, it will be illuminating and enlightening. . . . It should take you, as a viewer, outside of yourself, somewhere you haven't been before."
Incorporating the rectangular structure of the canvas in their composition, Frecon's oil paintings are large-scale arrangements of precisely balanced geometric forms. A range of earth reds dominates her palette, which also includes jewel-like tones of green, blue, indigo, and occasionally gold leaf. Although more gestural than her oil paintings, the watercolors are no less disciplined. Frecon's compositional elements are intensely allusive; in both mediums, however, color and form are never referential.
The exhibition will first be shown at the Menil Collection in Housten in spring 2008 and presents a selection of works which were carefully chosen with the artist.
www.kunstmuseumbern.ch