Just As A Sideline 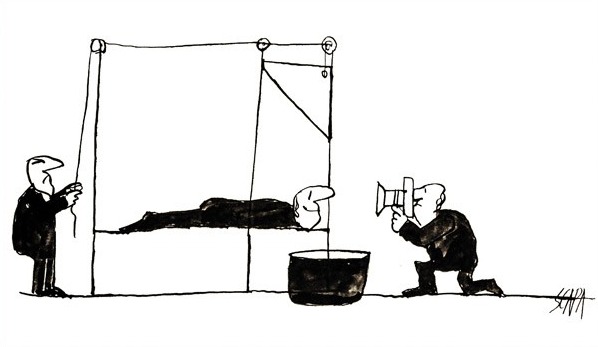 Ted Scapa, by birth Edouard Schaap, was born in 1931 in Amsterdam. After completing his art studies at the Royal Academy of Art, The Hague, he married Meret Meyer in 1962, the daughter of the publisher Hans Meyer-Benteli, and moved to Switzerland. Here he was director of the Benteli publishing house and became famous for his children’s program Das Spielhaus (The playhouse) on Swiss television. His cartoon and children’s books as well, as the caricatures he executed for domestic and international newspapers, such as the Nebelspalter or Weltwoche, brought his comic visual language widespread popularity and bore his unmistakable signature.

Ted Scapa’s life and work presents an extensive universe that is alive with exuberant creativity. The exhibition at the Museum of Fine Arts, Berne, engages with Scapa’s career as a fine artist, which has hitherto been obscured by his media presence as a TV moderator and cartoonist: it focuses on the paintings, sculptures, and design objects produced by the artist from 1992 onwards. Closely interlinked with his other occupations, he created a fine-art oeuvre that is characterized by wit and spontaneity, by vitality and playfulness. Scapa’s art transformed the everyday into pictorial inventions packed with deeper meaning and a zest for life. He invented a narrative visual language that is remarkably simple and packs everyone directly as if by magic. Scapa’s art and his person are definitely quite a phenomenon.

Catalogue: A catalogue will be published by the Museum of Fine Arts, Berne, for the exhibition.