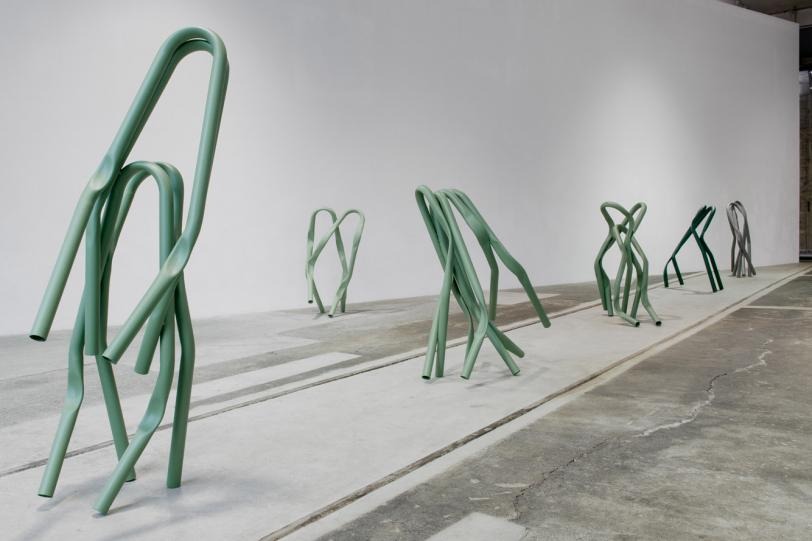 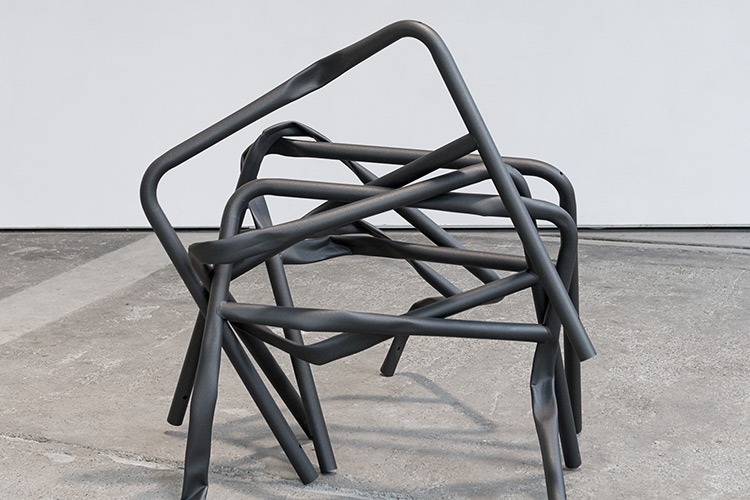 Under the title Protection, the internationally renowned artist Bettina Pousttchi (*1971, Mainz) has created a setting of new works specifically for the art area of the Lokremise, which will be shown here for the first time.

The focus of the exhibition is a photo installation showing the former Twin Towers at the World Trade Center in New York. This double icon of contemporary architecture by Detroit architect Minoru Yamasaki (1912–1986) is of course first and foremost linked to 9/11, the devastating terrorist attack on this symbol of global trade. Pousttchi thus explicitly addresses social and political issues, which play a central role in her work. In Protection she references the play Lugano Paradiso by the Swiss author and radio dramatist Andreas Sauter, which was created for the Theater St. Gallen and will be premiered in a production by Jonas Knecht on 22 March 2018 in the Lokremise. The three parts of the play will be shown at the respective locations of the cultural partners in the Lokremise. In a close collaboration between the Kinok, the theater, and the Kunstmuseum St. Gallen, a unique project for an extraordinary place took shape.

Sauter’s explosive play deals with the connection between a scandal involving secret government files, which shook the foundations of the political identity of Switzerland in 1989 and the trade relationship between Switzerland and the former East Germany as well as our present time.

Bettina Pousttchi became known for her large-scale photographs on buildings in public spaces, which cover the entire outer surface of the building. The facade of the Palace of the Republic, the East German parliament, was resurrected in 2009 and 2010 on the outside of the Temporary Kunsthalle Berlin, prominently located in the center of the city. She always incorporates historical and sociological aspects into her work and explores the connection between systems of time and space in a global perspective.

The installation in the Lokremise includes multiple references to the history of the place. The entrance area features wall reliefs made of fired clay from the Frameworks series, whose materials and form point to the period when the Lokremise was built, since glazed ceramics played a major role in Jugendstil buildings in the early twentieth century. This gives the room a very unified appearance and connects to the grid shapes of the industrial windows. The form of the glazed reliefs recalls Moorish ceramics with their filigree openwork structures. However, Pousttchi developed the geometric shape from the structures of half-timbered buildings in Frankfurt. In this way, distance and proximity come together as a cross-cultural identity.

Bettina Pousttchi works with commonly found, functional structures that are used in cities around the world. Street bollards, bike staples, and, in her latest series, tree staples are the starting point for her sculptures, which are shaped by bending and squeezing. This process leaves their original function behind and makes them a witness of an event that one inevitably associates with one’s own experience in the urban space. This makes the works very dynamic and gives them a cinematic and sequential impression, so that they can be read as symbols.

Already through the context of their use, Pousttchi’s sculptures have a strong anthropological connection. The objects are also recognizable in their altered form, and the forces that might have affected the object can be reconstructed. In the sequence of forms, the tree staples coated in two different green tones look light and lively, their lines reminiscent of dynamic movements of dancers. The volume of the sculpture results entirely from the line and then differentiates itself “almost unnoticeably” with the selected color, which is used primarily for machine paints - “shifting between olive tones, the Cold War, and the color of a forest in a nature reserve,” as the Almanach der Farben (Almanac of Colors) states.