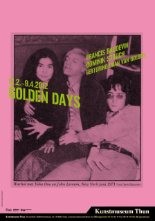 Golden Days displays works of the two artists Francis Baudevin (born 1964 in Bulle, lives and works in Lausanne) and Dominik Stauch (born 1962 in London, lives and works in Thun). The artists come together for the first time at the Thun exhibition and develop new works for the exhibition as well as adapt existing groups of older works to the context of the museum. In some rooms the artists work together and thus enter into a direct dialogue.

The works of both artists have several things in common: Both studied graphic design before they worked as visual artists, in their work both relate strongly to the design of everyday objects and their specific codes and appearances in the media and subcultures. Another important reference for both artists is music. Time and again one can find references to musical movements in the works, from the rock 'n' roll of the 60s, through 70s punk to the New Wave movement in the 80s. Francis Baudevin uses logos of well-known medicine packages, corporations, music labels or album covers for his abstract and geometric colour compositions on canvas or directly on the wall. Through the media mix of video, photography, painting, drawing, paintings found images and sculptures, Dominik Stauch creates in his work a dense world of references to both art and music history. In his room and video installations, the sound determines the rhythm of image sequences.

As a hinge between the worlds of ideas of the two artists, the Kunstmuseum presents the 70-piece work Golden Years by Daan Van Golden (born 1936 in Rotterdam). The Dutch artist has selected a black and white newspaper photograph for every year from his birth year until his 70th birthday (2006). The pictures were selected by the artist on purely subjective and aesthetic criteria and depict some significant historical events as well as small facts or famous personalities. The comprehensive documentation is a fascinating reflection of Western culture over the past 70 years and often shows images that have been inscribed in the collective memory of this time period. The newspaper clippings are presented in chronological order on a neutral grey background and thus take the viewer on a fascinating journey through the past 70 years.

An exhibition catalogue (Ger/Eng) will be released by Kehrer Verlag with numerous illustrations and contributions from Susanne Bieri, Paul Young, Caroline Soyez-Petithomme, Emmanuel Grandjean, Siri Peyer and an interview with the two artists by Helen Hirsch.
www.kunstmuseumthun.ch