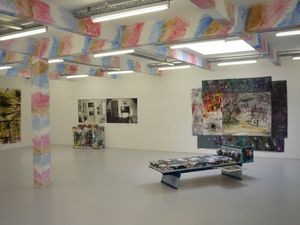 The first solo exhibition at the Kunstraum Innsbruck in 2009 is dedicated to the German artist Amelie von Wulffen (born in Breitenbrunn in 1966, lives and works in Berlin).

“Amelie von Wulffen is known, above all, for her collages in which centrally mounted photographs are expanded on, and dissolved into abstraction, by paintings. At times the artist even carries very concrete biographical or art history motifs over into the exhibition room itself and thus superimposes various levels of reflection – namely her own and ours, the observers.”*

At the Kunstraum Innsbruck the Berlin-based artist presents recent works, i.e. large paintings and collages, black-and-white photographs and pieces of furniture with specially designed fabrics.
The black-and-white photographs show deserted housing spaces holding seemingly antiquated furniture. They represent places and memories from the artist’s own past and at the same time stand in for the zeitgeist and for collective history.
At the centre of her most recent pictures and collages, besides photographs, we also find watercolours of city- and landscapes owned by the artist’s family, which she has adapted, reworked and expanded on with paintings.
Sofas (constructed by Lucio Auri) with specially designed fabrics, a sideboard painted and decorated with shells, as well as a wall painting created in situ will make the exhibition complete.

Introductory words to the exhibition will come from Silvia Eiblmayr, commissary (together with Valie Export) of the Austrian pavilion at the 2009 Venice Biennial.
www.kunstraum-innsbruck.at