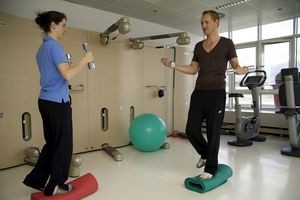 with the kind support of Lanserhof Health and Medical Centre (www.lanserhof.at)

Be it hula hooping or karaoke singing at the museum, teleshopping at the art fair, or a cooking show at the Kunstverein, Christian Jankowski, as a latter-day Eulenspiegel, sneaks his way into the entertainment industry and the art scene, and avails himself of mass media formats in order to question the roles of art, politics, entertainment, economy, and global marketing strategies. He does so not in a patronising manner, but with subversive humour and a lot of pleasure in masquerading and playfully changing roles. Video, film, photography, and installation are the appropriate means for his artistic strategy.*

For the Kunstraum Innsbruck, the internationally renowned Berlin artist Christian Jankowski has developed a new in situ work. For this purpose he spends ten days as a patient at the Lanserhof health resort, documenting and reflecting on his sojourn there.

It is a tradition, at Lanserhof, to accommodate not only high-ranking managers and politicians, but also the occasional artist of international fame, such as Martin Kippenberger, Franz West, or Tobias Rehberger.
Jankowski’s intention, staying there, was to counteract an artist cliché, i.e. artists exploiting their own body, and to abandon himself exclusively to “becoming well” during his ten-day stay at Lanserhof. He refutes the “wild” artist life by bringing his body back into shape under professional medical supervision. The sojourn thus turns into a performative work of art made public.

During these ten days, Jankowski will document his stay photographically, videographically and biographically, as it were, and with the material thus gathered conceive an exhibition for the Kunstraum Innsbruck.

To accompany the exhibition, there will be a catalogue, entitled “Das gesunde Werden” (Becoming Well), co-produced by the artist, the Kunstraum Innsbruck, and Lanserhof, and published by Verlag der Buchhandlung Walther König.
www.kunstraum-innsbruck.at