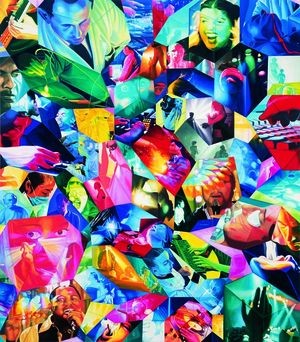 Corinne Wasmuht belongs to the generation of artists stepping into the limelight in the nineties. In those years, in contrast to abstract gestural painting, her large picture panels, holding both representational and abstract elements, evolved into a sort of ideal figuration, that once more anchored the fictitious element within the image. The interlacing or superimposition of spaces, in these pictures, is a destructive interweaving of space-time, in the spirit of the hypothesis of a fourth dimension. The pulling effect of the perspective is balanced by a state of uncertainty that crystallises in the spatial texture, a phenomenon that unfolds in the painting process and not in the projection of the spaces, which derive from private snapshots or photographs taken from the Internet. The world of colour pixels may take shape at the photo shop, but the intensity and the density of these colours is owed to the mosaic-like painting itself. It is no accident that Wasmuht, in the nineties, prepared her paintings with the help of collages.
Corinne Wasmuht's paintings are like radiograms of a superhuman world, as seen by computers, in which fragments of memories and photographic documents of topographic scenes keep flashing up. Street views, airport concourses, wild places, waterfalls, the whole networked world is disassembled into energy fields. While in the nineties this took the form of facets, as possibly seen from the eyes of an insect, now it takes the form of holistic scenes that, like a Fata Morgana, occasionally come out upside down or doubled. “As above, so below, as within, so without,” as one of the maxims of Hermes Trismegistus goes.

The exhibition at Kunstraum Innsbruck is the project for a room. It presents a large new painting juxtaposed with the picture panel “Menschen im Kunstlicht” (lit. People in the Artificial Light), created in 1999, which incorporates a series of portraits, taken from various media, in simultaneous opposites. In addition, there is a first chance to see a selection of her photo prints.

Corinne Wasmuht, born in Dortmund in 1964, grew up in Peru and Argentina, studied at the Kunstakademie Düsseldorf, and now lives and works in Berlin. She teaches at the Akademie der Bildenden Künste in Karlsruhe. Wasmuht received the first Oberrheinische Kunstpreis in 2010, the August Macke Preis in 2011, and is going to take part in the 54th Venice Biennale.
www.kunstraum-innsbruck.at