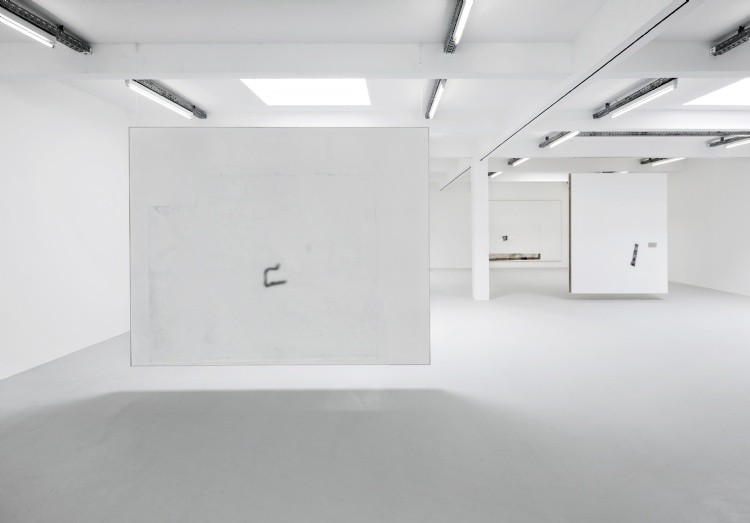 The Kunstraum Innsbruck presents the first institutional solo exhibition by the German painter David Ostrowski in the German-speaking world. The work of the Albert Oehlen student has found widespread international resonance already through solo shows at the Fondazione Sandretto Re Rebaudengo in Turin (2014), the Rubell Family Collection in Miami (2014) and the ARKEN Museum in Copenhagen (2015). To the Kunstraum Innsbruck the artist comes with a new work series, dedicated to his own style of abstraction. The recipe of choice here is a complete emptying of the often white canvas, which amounts to a radical form of abstraction. Often it is but small pictorial interventions that determine the composition within the picture space. Pictorial tools, besides the canvas itself, are the use of spray cans or materials such as paper, strips of wood, newspapers or cardboard, things lying around in the studio. The artist himself speaks of the instrument of the mistake that guides him towards a composition. After a fire at his studio, which in 2009 destroyed his entire previous oeuvre, he began making use of the emptying of the canvas as his primary stylistic device. The large-format come at us as autonomous pictorial entities that frequently, during the hanging, leave the wall and spread throughout the exhibition space as spatial bodies. What we are faced with in the process are philosophical concepts of refusal, and also of complete emptiness, as a representative device. The withdrawal of any form of narration in these pictures goes hand in hand with very specific titles the artist gives them, which often consist of quotes derived from popular culture.

An artist book and limited edition will be published. The exhibition is organzied in cooperation wit Peres Projects Berlin.

David Ostrowski (b. 1981), who lives and works in Cologne, studied with Albert Oehlen in Düsseldorf. Currently, he has solo exhibitions at the ARKEN Museum in Ishøj, Denmark, and the Rubell Family Collection in Miami. In 2014, his works were presented prominently at Fondazione Sandretto Re Rebaudengo in Turin. He also has had solo shows at the galleries of Peres Projects (Berlin), Simon Lee (London), Almine Rech (London), and Eva Presenhuber (Zurich, scheduled for 2015).
www.kunstraum-innsbruck.at