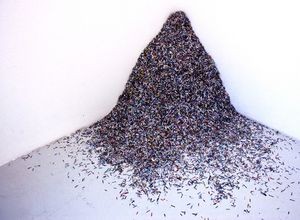 With Lorma Marti’s how we spent it the Institute of Design Studio1University of Innsbruck presents its first edition of correspondents. This new series of publications features work by artists, architects and researchers who, as visiting faculty, contribute significantly to the dialogue within Studio1.

Studio1 is directed to exploring and questioning issues related to the mostly constructed, mostly artificial contemporary environment. These range from the development of critical assessments of landscape and urban environments to the understanding of relationships of design and production, from studies of social and cultural phenomena to their translation into physical realities.

Lorma Marti - how we spent it

In how we spent it Lorma Marti transcribe products, prices and values from the Financial Times weekend supplement how to spend it into text and barcodes - a register of moods, patterns and trends since the year 2000.

For the Kunstraum Innsbruck project space, Lorma Marti complete their long time observation of the magazine: having calculated all listed values as prices per kilo their collection of how to spend it - issues will be shredded, leaving behind a valuable heap of paper scraps.