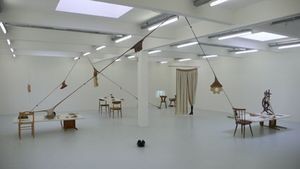 For his first solo exhibition in Austria, Martin Soto Climent, born in Mexico City in 1977, transforms the Kunstraum Innsbruck into a theatrum bestiarium. Yet it is not the animal world, or the human bestiarium, that he shows, but the secret animism of objects, of the objets trouvés he likes to use. These mostly derive from accessories for men and women, such as gloves, shoes, pantyhose, T-shirts, wallets, or hair driers, or the accessories and design objects from our homes, like brooms, roller blinds, beer cans, bottles, or glasses. Occasionally, the artist also accentuates his spatial installations with strategically positioned photographs and videos. What interests him, in the process, is not only the ambivalences of these objects, but also the relation, inscribed in them, between male and female, life and death, horizontal and vertical. Soto Climent fathoms their sensitivities, their animism, that oscillates mimetically between fetish and narrative. The Bright of the Whisper, the title that he gave his exhibition, refers to those hardly audible voices that the perceptive observer, and not least the artist himself, is prepared to notice, the very gentle inner whispers of seduction and temptation, the sexually charged subtleness of an easily understandable symbolism, including the poetical brightness apparent to those happy to follow. Martin Soto Climent arranges his objets trouvés and ready-mades into a ritual that was conceived for the white cube, yet he does so according to the rules of the fetishes of the modern world, as recognised by psychology (Krafft-Ebbing). These fetishes themselves, as the artist envisages, shall set in motion their mysterious, at times erotic, at times grotesque and humorous dialogue. (We observers, meanwhile, watch and listen.)
www.kunstraum-innsbruck.at